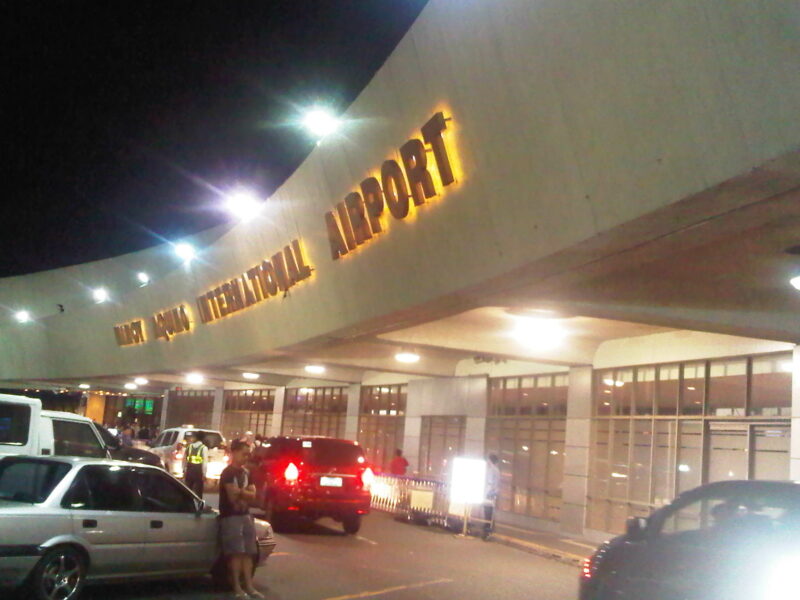 Terminal 1 of the Ninoy Aquino International Airport. Photo by author.

A Philippine legislator has filed a bill seeking to rename the country’s busiest airport [2] after the late dictator Ferdinand Marcos Sr.

Negros Oriental Representative Arnolfo Teves Jr. argued that Ninoy Aquino International Airport (NAIA) in Metro Manila should be renamed the Ferdinand E. Marcos International Airport since “it is more appropriate to rename it to the person who has contributed to the idea and execution of the said noble project.”

In the explanatory note of his bill [3], he added:

It is more appropriate to bear the name that has contributed and legacy in our country to make the Philippines a center of international and domestic air travel, who has instituted and built or conceptualized the project in making pride of our country.

His proposal immediately garnered controversy. Marcos is the father and namesake of the incumbent Philippine president, whose government was inaugurated on June 30 [4].

Marcos Sr. declared Martial Law in 1972 which led to thousands of extrajudicial killings and arbitrary detentions [5]. His family is accused of stealing billions of dollars [6] from the national treasury as they lived a life of luxury while millions of Filipinos suffered in extreme poverty.

Teves was criticized for making a false claim [7] that the Metro Manila airport was built during Marcos’ tenure. The history of the airport’s construction is on the website of the Manila International Airport Authority [8]:

The first thirteen years of the airport were marked by the building of infrastructure dedicated to international flights. The international runway and associated taxiway were built in 1953, and 1961 saw the completion of a control tower and a terminal building for the exclusive use of international passengers at the southwest intersection of the runways.

While the airport was completed in 1961, Marcos Sr. only became president in 1965. But Teves insisted that the modernization and rehabilitation [9] of the airport took place during the Marcos presidency. He belittled the relevance of the People Power (EDSA) uprising which ousted Marcos in 1986. He believes that the victory of Marcos Jr. in the 2022 election is proof of EDSA losing its relevance [9] which justifies initiatives that celebrate the legacy of the Marcos presidency.

And also let’s be attuned to the times. If EDSA (revolution) was relevant before, today no more. If it is relevant today, BBM [Bongbong Marcos] would never win.

Manila Airport was renamed NAIA in 1987 [10] to honor opposition leader Senator Benigno “Ninoy” Simeon Aquino Jr., who was gunned down on the airport tarmac in 1983. He was a fierce critic of Marcos and was detained from 1973–1980 for defying Martial Law. His death sparked massive protests that undermined the Marcos government and inspired many to support the 1986 People Power peaceful revolution. Marcos was replaced by Cory Aquino, the senator's widow.

Former legislator Teddy Baguilat wrote that renaming NAIA will not change the brutal legacy of Marcos [11]:

Most airports named after historical figures, heroic ones. Ninoy’s death sparked the Filipinos to rise and oust a dictator. Marcos Jr maybe back but that doesn’t belie the fact that Marcos Sr died a disgraced authoritarian.

The office of the incumbent president stated that the bill is not part of the legislative priority [12] of the new government. But the proposal, which was based on a misleading premise that it was built during the Martial Law era, reflected the spread of disinformation narratives that enabled the Marcoses to return to power. Several reports have shown that Marcos supporters have flooded social media platforms [13] such as Facebook, YouTube, and TikTok with false information about the family. Among the common themes include suggestions that life was easy and happy during the Martial Law era, the Marcoses inherited gold bars from a mythic royal family, and that Marcos Sr. was a decorated World War II hero — none of which are true.

Prominent economist Solita Monsod warns about the insidious motive [14] behind the bill:

The efforts of the Marcos social media propaganda machine over the past 8 years to revise Philippine history, are now being pursued and expanded enthusiastically by politicians who want to brown-nose the new administration, or who have an axe to grind against the Presidents Aquino (mostly Cory), or a combination of both.

Folks, this is the first step in erasing the memory of what Ninoy Aquino did for country. Revisionism run rampant.

In the short run, there are far more important problems that the Marcos regime has to resolve, without a complete Cabinet and the competency to resolve public issues. In the long run, this is a battle for historical fact, public memory, and truth-telling. It matters because the nation’s story has proven that twenty years of Marcos Sr.’s brutal dictatorship has cost a future we must reclaim.

This is not the first time that politicians have proposed [16] changing the name of NAIA. There have been previous bills and petitions [17] to rename NAIA the “International Airport of the Philippines” or revert back to its original name of “Manila International Airport.”

A senator said the divisive proposal should be shelved, and the new government should instead focus on addressing the nation's enormous issues such as surging fuel and food prices, record joblessness, and the pandemic-related health crisis:

‘LET'S NOT TOUCH THE NAME OF NAIA ANYMORE’

Sen. Sherwin Gatchalian said the name of the Ninoy Aquino International Airport should not be touched anymore, pointing out that it is a “very political issue.” pic.twitter.com/uDG5yww1lm [18]