Was the high price a result of heavy rains or a labelling mistake? 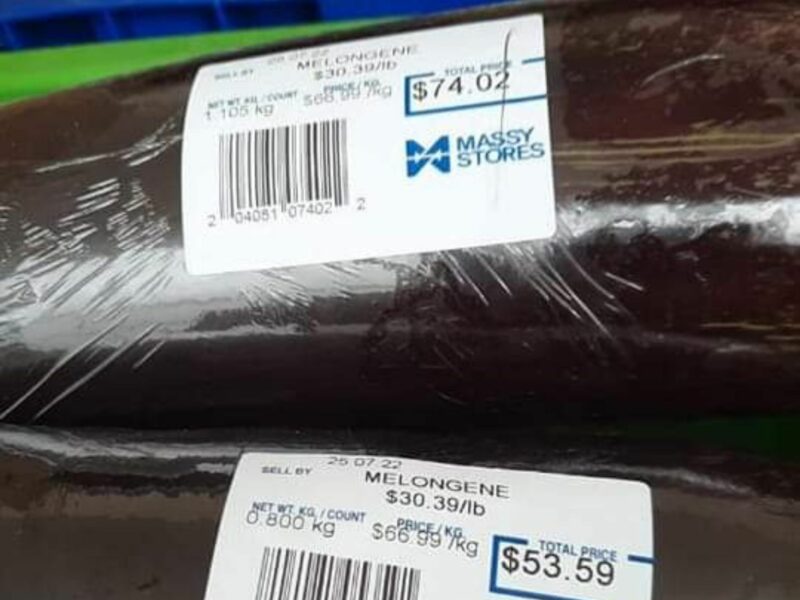 In mid-July, photos of food items on offer at Massy Stores, one of Trinidad and Tobago's most popular supermarkets, began circulating on social media. What caught people's attention were the price tags on the items: eggplant (known locally as melongene or baigan) was TTD 30 (USD 4.41) per pound. Single eggplants were selling for between TTD 50 and 75 (USD 7.34-11), leaving shoppers puzzled at the drastic increase in the price of a product that is locally grown.

A few weeks earlier, the Caribbean Development Bank (CDB) had tweeted about a 2020 World Bank report on regional food security, hinting that the region would be faced with a serious food crisis unless nations undertook urgent agricultural reforms,

As the social media outcry spread, a post by media outlet Loop News suggested that the price increase was the result of the heavy rains that had caused flooding in agricultural areas. Wayne Inniss, Chairman of the National Agricultural Marketing and Development Corporation (NAMDEVCO) called it a case of “basic Economics 101 — the demand is greater than the supply, so with the regular supply scarce, prices have shot up.”

It is 2022…and Im still hearing adverse weather conditions as a reason for food price fluctuation…as if farming techniques have not evolved since 1492.

Inniss suggested that consumers start their own vegetable gardens to help keep their food costs down.

Massy Stores soon announced that the prices in the photos were a mistake — the items had been incorrectly labelled, and that once the error had been brought to the company's attention the products had been “removed, […] re-priced and replaced.”

Not all social media users were buying it. Facebook user Natasha Alfred commented on a group thread:

I believe Massy deliberately put that price on the melongene to ‘test the waters’ and the public exploded! Now there is a pic of a cauliflower at Massy's Westmoorings branch with a $70 price tag on it…is that a mistake too???

Newsauce soon posted photos of the offending cauliflower, along with a dragonfruit that bore a price tag of TTD 168.17 (USD 24.40), simply asking: “Errors?”: 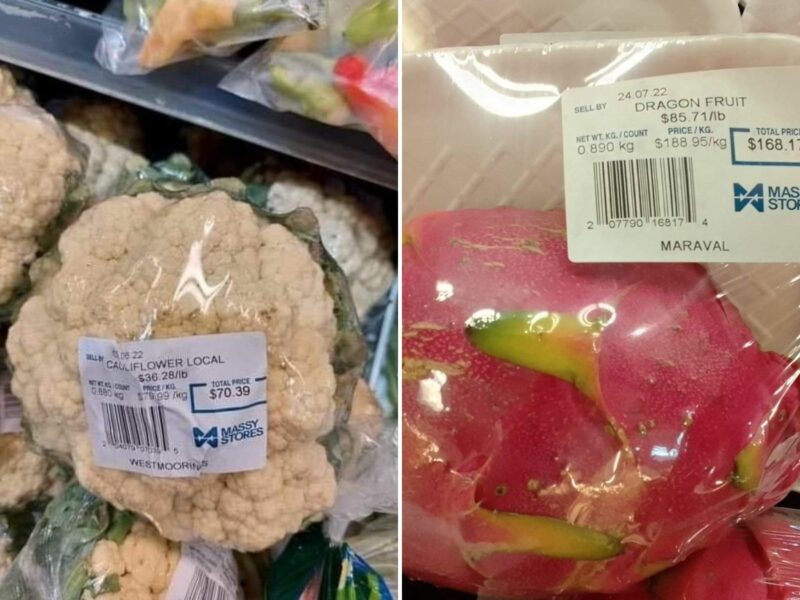 Widely shared images of cauliflower and dragon fruit in Massy Stores, Trinidad and Tobago, reposted by Newsauce on Facebook.

Netizens did not hold back. Yolande Dick asked, tongue firmly in cheek:

So the price gun fall and bounce it head? Come nah man Massy

Saw the dragon fruit price about two weeks ago and simply asked ‘HOW?’ especially since that fruit tastes like failed hopes and dreams. There was no mistake there!

This pumpkin from Massy is slightly cheaper per pound that the price you quoted from the Farmers Market. There's obviously not 7 pounds of pumpkin in that tray so there's an error in the labelling.

Massy taking this for a joke now?
This doesn't look like 6.5 lbs of pumpkin to me.

After reading a Toronto Star article which claimed that Canada-based supermarkets have been hiking prices more quickly than the market dictates and profiting from inflation, Newsauce also advised:

Keep an eye on prices at your local groceries and see if they are doing the same thing.

While there is currently no data to support claims of unreasonable price hikes in Trinidad and Tobago, it's clear that local consumers are feeling the pinch. Such large and unpredictable shifts in pricing also erode the good faith of the public, who feel insufficiently supported by organisations like the Consumer Affairs Division of the Ministry of Trade and Industry, whose mandate it is to protect the interests of consumers and advocate on their behalf.

Here [come] the Trinis comparing our country to Bim [Barbados]. Bear in mind we already have a truck load of subsidies. Bear in mind Barbados’s cost of living is one of the highest in the the Caribbean region if it isn’t number 1. So with that being said, I’m glad the move was taken but I still maintain we were blessed in TT.

Prime Minister Mottley has confirmed that all parts of the supply chain — farmers, supermarkets, and wholesaler-distributors — have agreed to keep their mark-ups on certain key food items at no more than 15 percent in an effort to help ease the financial strain on citizens.

In Trinidad and Tobago, data from the Central Statistical Office (CSO) revealed that the cost of food had increased by 0.3 percent in just one month, from April to May 2022.