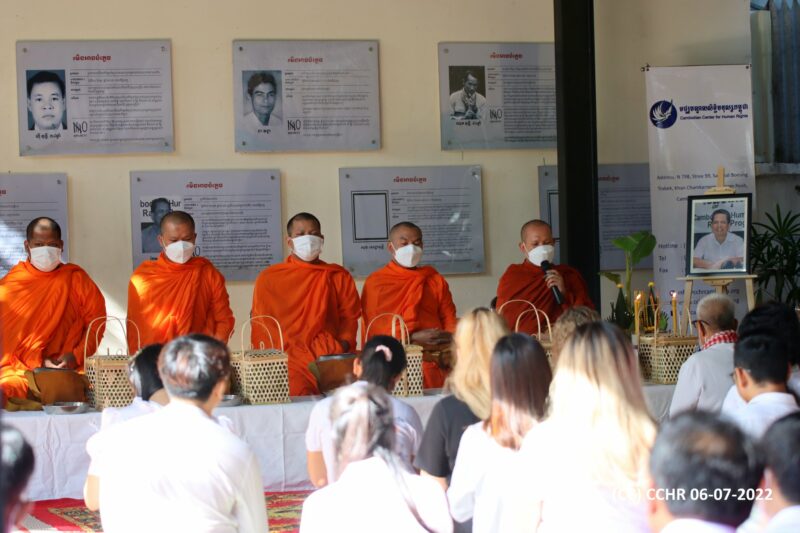 A religious event in Phnom Penh marking the death anniversary of Kem Ley. Photo from the Facebook page of the Cambodian Center for Human Rights. Used with permission.

Religious ceremonies were held in Cambodia to commemorate the sixth anniversary of the death of prominent political analyst Kem Ley.

Kem Ley was killed at a gas station on July 10, 2016, in Phnom Penh. Many suspect the murder was linked to his work as a commentator and political analyst. He was murdered days after he gave a radio interview about a Global Witness report detailing corruption under the Hun Sen government, which has ruled the country since 1985.

Since 2016, civil society groups have been calling on officials to properly investigate the murder and determine the person(s) behind the killing.

Oeuth Ang, who gave his name as “Chuob Samlab” or “Meet to Kill,” confessed to the crime and was sentenced to life in prison in 2017 for premeditated murder and for illegally obtaining a weapon. He testified that Kem Ley owed him USD 3,000, a claim that many find absurd.

Local and global civil society groups have criticized the “inadequate” probe conducted by the police and the trial proceedings and suggested Ang is being used as a scapegoat. They urged authorities to reopen the case and conduct an independent investigation. They added that Kem Ley’s killing took place amid worsening impunity in the country. During the same time, Prime Minister Hun Sen’s government intensified its crackdown targeting opposition forces, critics, and even the media.

In previous years, the local government banned public demonstrations commemorating Kem Ley’s death. Several individuals were even arrested for attending ceremonial events at the site where Kem Ley was murdered.

This year, Kem Ley supporters were able to gather peacefully.

About 70 unionists, youth activists and civil society members gathered this morning outside the Star Mart at the Caltex Bokor service station in central Phnom Penh where Kem Ley was shot dead while drinking his morning coffee on 10 July 2016. Participants laid flowers and held a monk blessing ceremony. The mart was shuttered as commemorators began to gather, while about 20 plainclothes security monitored the event.

Members of the Grassroots Democratic Party said some of their members were prevented from holding a commemorative ceremony by police :

Authorities prevented GDP leaders from traveling to the Wat Chas Pagoda on foot to mark the 6th anniversary of the assassination of #KemLey! pic.twitter.com/ZxcFURJB5x

Another ceremony was held at the Solidarity House, where supporters offered food to monks to dedicate to the soul of Kem Ley. The Cambodian Center for Human Rights wrote about the event:

The ceremony included the offering of food to monks to dedicate to the soul of Dr. Kem Ley and other heroes who have lost their lives due to their social activism. A video was then screened, and played audio recordings of key speeches given by Dr. Kem Ley. Poems commemorating his heroism were read and recited. Finally, friends of Dr. Kem Ley reminisced about the memories they had with him.

On 6 July 22, CCHR held a religious ceremony to commemorate the 6th anniversary of Dr. Kem Ley's death at its office. It included the offering of food to monks, videos & audio recordings of K. Ley's speeches, poems commemorating his heroism & friends reminiscing memories of him. pic.twitter.com/6uRxtjbWBr

Diplomats, local civil society groups, opposition leaders, and global human rights advocates are among those who honored Kem Ley during his death anniversary. Heng Kimhong, head of the Research and Advocacy Programme of the Cambodian Youth Network Association, recalled the legacy of Kem Ley in an interview with a local media:

I would like to call on the authorities and the court to find justice for Kem Ley, because this death is unacceptable to us. We will still remember Kem Ley because he spoke the truth in the society and dared to talk about the shortcomings of the authorities.

Koet Saray, president of the Khmer Student Intelligent League Association, said that young Cambodians inspired by the work of Kem Ley are defiant as they continue to fight for justice: “We aren’t afraid because for us, who have seen impunity and social injustice, insecurity in Cambodia, we won’t worry of arrest.” 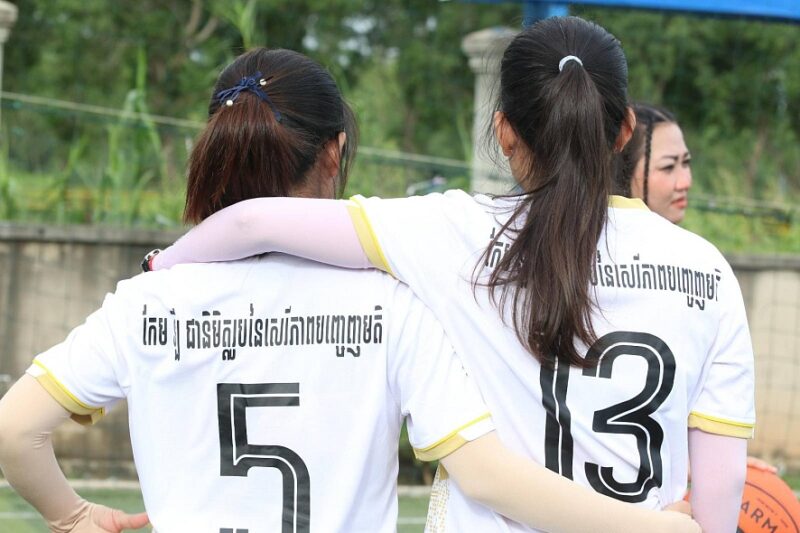 Meanwhile, authorities insist that the case is already resolved and have accused the opposition of politicizing the death anniversary of Kem Ley. In 2021, the Ministry of Justice spokesman Chin Malin advised Kem Ley supporters to file an appropriate petition and submit new evidence:

The political parties that cried out about Dr Kem Ley’s death in the past have never exercised their legal rights other than to make political statements, accuse, criticise, demean the authorities and cast doubt…With no contradictory evidence or a solid legal basis.