Working through history: Folk on Acid, by Estonian band OOPUS

'Crucially, ... their interest in prehistory is not coupled with reactionary politics' 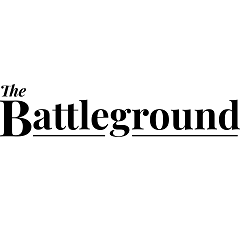 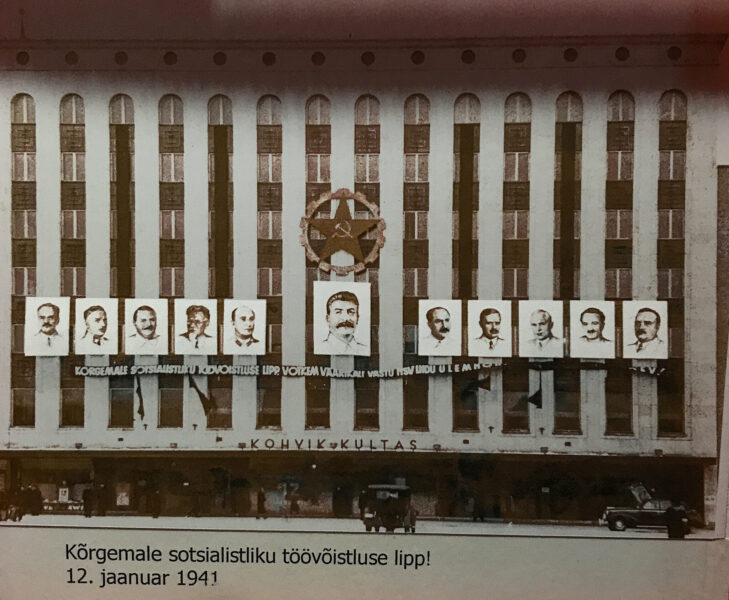 Estonia before neoliberalism. Historical photograph from 1941 on display in Tallin City Museum. Photo by A. Davey, CC BY-NC-ND 2.0.

This article by Charlie Bertsch was originally published on The Battleground. An edited version is republished on Global Voices as part of a content-sharing agreement.

If you stumbled upon Estonian band OOPUS at a festival, where many different acts are on the schedule, it might take you a few minutes to realize how special they are.

Despite their titles, the tracks “Käi kiike korge’elle” (“Swing Up High”), “Saunamees” (“The Sauna Man”), and “Su vaimu isa palume” (“We Pray to Your Spirit, Father”) off their new album Folk on Acid feature long instrumental stretches that would sound familiar to anybody who is fond of electronic dance music’s harder edge: propulsive, minimal, menacing.

For someone who is more interested in feeling than thinking, their music can pass for the hard techno that hearkens back to the heyday of rave culture.

But as George Clinton told us long ago, if you get people to move their bodies, their minds just might follow. And OOPUS provides a fascinating destination. In this hypothetical festival setting, the longer you listened to OOPUS, the more apparent it would become that the initial familiarity of their sound was a ruse.

“Come and Greet the Moon” from Inventing Lunar Cycle, the live improvisation album they released one month before Folk on Acid starts with a hard techno rhythm, but soon juxtaposes it with whispered spoken-word lyrics that periodically fracture into echoes.

A female voice appears on most of their tracks, whether speaking, chanting, or singing in Estonian.

Some of their songs, like “Happy Piper,” make prominent use of an instrument somewhat like bagpipes. Others, like “Norra Reilender,” fuse the sound palette of synthesizer-driven electronica with flute.

As vocalist Mari Meentalo told me when I interviewed her and her bandmate Johannes Ahun — their third collaborator, Alexander Sprohgis, is responsible for OOPUS’s compelling visual dimension — this highly unusual juxtaposition came about because the band perceived similarity where others could only see difference.

“When I studied Estonian music at the uni,” she explained, “I had to analyze so many traditional pieces. I realised that they bear a lot of similarity with electronic dance music.” Both prioritise repetition over variation, with minimal melodies, “in order to keep people dancing.” In light of this overlap, “it seemed only logical to see how those two worlds worked together.”

Continuing this thought, Ahun pointed out that Estonian traditional music has no drums or other percussive instruments. “The most percussive instrument, basically, is your body.” That’s why, as he became more comfortable using the analog synthesizers popularized by the house and acid scenes of the late 20th century — which emerged, it should be noted, right when Estonia was regaining its independence from the Soviet Union — he decided to see whether the negative space of this traditional music could make room for modern beats.

Although the title Folk on Acid might deceive some music fans who know nothing about the band — especially elderly Boomers — anyone who knows what happened when house music met MDMA should have a good idea of what the concept is intended to convey.

Yet OOPUS still manages to surprise.

“Most of the traditional songs that we use are in old dialects. Most of them aren’t even spoken at the moment. Or only a handful of people can speak them.” This means that “most Estonians don’t understand the lyrics.”

Building on this point, Ahun noted that there are two kinds of traditional songs in Estonian culture, more recent ones and those that date from much further back. OOPUS prioritises the latter.

Interestingly, their musical collaboration began after a 2017 trip to the Burning Man festival in the United States, when they realized the potential in their native heritage.

“We realized that we didn’t have to invent something out of the blue,” Meentalo said. “In Estonian traditional music, the stories already exist.”

Interrupting excitedly, Ahun described what OOPUS is trying to achieve in figurative terms.

“Are you ready to go to space? Our journey starts today. Before going to space, we need spacesuits, because there is no oxygen up there. But we have good rhythm and we are going to conquer the galaxies far beyond. Behind the Milky Way we can see our ancestors.”

In Estonian tradition, Meentalo added, storks did more than bring babies. “They had the ability to travel beyond the Milky Way and bring souls back to Earth.” This is the kind of story that OOPUS wants to tell, reacquainting people of today with the primordial curiosity on which their culture is founded.

For someone like me, with no knowledge of the language, this playful description of the band’s approach doubles down on something I had already sensed in the lyrics, reinforcing the strangeness of OOPUS’s attempt to fuse traditional and electronic dance music.

There have definitely been times when listening to Folk on Acid or the band’s first album Nöidus/Sorcery that I had the sense that I was listening to music from another planet altogether, the kind of peaceful, if troubled, society that a Star Trek crew might commune with.

However far away the music comes from, though, it definitely comes from a place where the body holds a place of honour.

OOPUS have no use for the beat-deprived meanderings featured in many sci-fi scenarios, modern takes on the only music Plato deemed fit for his republic. Like the Dionysian mystery cults that frightened Plato, OOPUS look east. In their case, though, it isn’t Persia they have in mind, but somewhere much farther north, in the remote Siberian lands from which the Finno-Ugric peoples originally came.

Crucially, though, their interest in prehistory is not coupled with reactionary politics.

“Folktronica,” as they prefer to call the subgenre they helped invent, strives to reconnect listeners with cultural origins as a way to imagine a future that respects tradition without being forced to repeat the past.

That progressive impulse is particularly noteworthy in a nation with as little history of independence as Estonia, because attempts to preserve endangered languages and cultural traditions — a fundamentally positive form of conservation — tend to get confused with less savoury impulses.

Like neighboring Finland, Estonia flirted with fascism during its brief period of autonomy between World War I and World War II, in part because the Soviet Union seemed a bigger threat than the region’s other historical powers, Germany and Sweden.

During the Cold War, when Estonia’s worst fears had been realized and, like neighboring Latvia and Lithuania, it had been reduced to the status of a Soviet republic, expatriates doggedly sustained the dream of independence when it seemed extremely unlikely.

Understandably, they were staunch anti-communists. But anti-communist sentiments have a way of devolving into proto-fascist ones, as the world has witnessed in several nations that were once part of the Eastern Bloc.

Whether local, regional, or national, tradition is inherently divisive. Although we feel bound together by the traditions we share, that sense of belonging can never be universal. It derives from an act of exclusion. We can admire the traditions of others. We can be inspired by them. We can even copy them wholesale. But no matter how sincere our devotion and how expert our mimicry, we will still be on the outside looking in, never able to achieve a truly authentic performance.

Although mindful of the different connotations that the term “folk” has in different cultural contexts, Ahun made it clear that he still sees it in a positive light, emphasizing that OOPUS doesn’t regard it as a synonym for “tradition.” If this leads to confusion, so be it.

“I consider our mission a success,” he concluded, “if it’s so badly understood.”

It’s hard to imagine a more international idiom than the beat-driven electronic music that developed alongside rave culture. No matter where you are in the metropoles of the world, you can find people who like to go out and dance to it in public, whether at house parties, clubs, or festivals.

This is why the fusion OOPUS pulls off is so important. Although a few devoted listeners outside Estonia may be moved to become better acquainted with the history and culture of that “success story” on the Baltic, it’s unlikely that the band will inspire mass conversions.

What “folktronica” does have the potential to do, however, is to inspire listeners to reexamine their own cultural heritage — German, French, Russian etc. — and imagine ways of deploying its riches for progressive ends.

In other words, OOPUS is showing us how to minimize the divisiveness of tradition and find a way to subordinate it to the goals of a truly international movement.