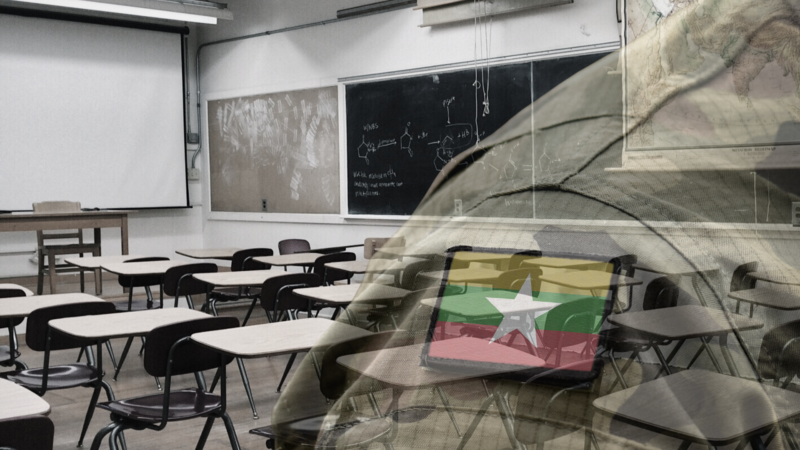 Following Myanmar’s military coup in 2021, civil workers participated in large strikes and formed the Civil Disobedience Movement. Teachers from government schools of all grades and universities participated, along with medical staff and government workers, by refusing to go to work. The Burmese military regime cracked down on the striking teachers and made targeted house arrests.

At that time, schools in Myanmar were completely or partially shut for 15 months due to the COVID-19 pandemic. Of the schools that remained partially open, some were caught in the crossfire between the military and organized groups of armed civilians. Save the Children reports that there were at least 260 assaults on school buildings between May 2021 and April 2022, frequently with explosives.

By June 2022, when the education system re-opened for the new academic year, schools were understaffed, despite the military's threatening insistence that teachers return to the classrooms. Meanwhile, many parents chose to not send their children back to school, fearful of the attacks and wary of an education system under a military regime, eerily similar to their own childhood, in the 1960s.

The Observatory's Myanmar team has been dedicated to explaining how the Junta and its supporters are trying to spin-doctor narratives about the country’s educational system.

The education system is a hot topic in Myanmar, as military supporters attempt to position Myanmar as a functional country post-coup. However, the situation is unstable: school buildings have been targeted by rebel armed civilians against a backdrop of military control. It is unknown how many children are going back to school. Myanmar’s education fallout may have consequences on the country’s future development.

Both military and democracy supporters have been expressing their views on the post-coup education system on social media, especially on Facebook. (If you would like to know more about the use of Facebook inside Myanmar, check out a previous edition of Undertones about how Myanmar's military supporters are using Facebook to justify violence.)

Military supporters, such as the participants of the Facebook group တပ်မတော်ချစ်သူ တပ်မတော်သားများဆုံဆည်းရာ (“Hub for military lovers”), claim that the military regime will bring the children of the future “into the light that is the glory of Burmese conservatism and Buddhism.” For them, the civilian government under the NLD party — the liberal democratic party that was overthrown by the coup —  had been disrupting children's minds. This was made very apparent when the civilian government's education ministry announced that it would incorporate sex education in future curricula, creating an uproar. This incident would later be cited by military supporters as an example of “progressives’ brainwashing.”

The main opposition to the NLD's quasi-democratic civilian government referred to its “progressive” views on religion and nationality. Military supporters have always favored the proxy party USDP due to its strong preference for ultranationalism and conservatism.

Since the coup, as the ousted politicians formed an alternative government in exile and some protestors took up arms in guerrilla-like groups, military supporters have started to express this sentiment again. One of their major arguments is that any civilian government would destroy their values.

In contrast to this narrative, some democracy supporters recounted their personal experiences of undergoing education under the military regime that began in 1962, when the curriculum was severely manipulated to reinforce the regime’s agendas (such as nationalism and Buddhism as a superior religion). This also served to strengthen Burmese privilege and erase the history and struggles of ethnic minorities.

They claim that corruption in the education system is also rampant in the grading, examinations, and entrance requirements. Democracy supporters assert that the civilian government was on the right track, making much-needed changes to the curriculum that had been in place for more than 20 years by attempting to make educational systems more transparent and inclusive.

2.“Only military supporters value Buddhism and care about the nation”

This is another narrative tied to Buddhism to justify the use of violence in schools against the political opposition. Ultranationalist Buddhism has always been the main core value of military supporters as they believe that the NLD and the civilian government have been destroying these values.

This Facebook post claims that the NLD-led government was trying to brainwash children by allegedly teaching that Islam was born in BC 2000 instead of seventh century AC. The author called it “slave education,” a term that has its roots in colonial times when independent groups criticized people partaking in English-oriented education as having a “slave mentality.” The author also claims that the civilian government wanted to put sex education in the curriculum to inculcate immoral values in children, instead of Buddhism and nationalism.

Additionally, military supporters have artificially increased the number of students who have gone back to school, further enforcing the notion that the military will always save the day and that business continues as usual despite the attacks on school facilities.

3. “The military, not the NUG, has the support of the majority of the population”

Faking numbers is not a new strategy in Myanmar. Ever since the previous dictatorship, military supporters have felt that they were the majority of the population, if not the “better group.” They use this narrative to underline the military’s justification for its coup: that it fixed an electoral fraud. They believe the NLD could not have received the majority of the votes back in 2020 when it won with 82 percent of the votes.

This Facebook post claims that there are more than 5,200,000 students who came to school on the first day of June 2022, and then 400,000 more on the second day, with an overall rate of 93.13% of nationwide attendance. There is no evidence or source to support this claim.

4. “Myanmar's citizens should adapt to life under military rule”

As the economy and general security have worsened post-coup, military supporters have begun claiming that the country is not as bad as it seems and that national stability will be restored as long as the military handles things and people abide by the rules.

This Facebook post says that children on their first day of the new school year are innocent, without fear and worries of the “terrorists,” referring to the armed pro-democracy activists. This is an example of military propaganda by an author from the military proxy party who wants to paint the image of a functioning country post-coup.