Drone diplomacy and geopolitics of arms race in Central Asia 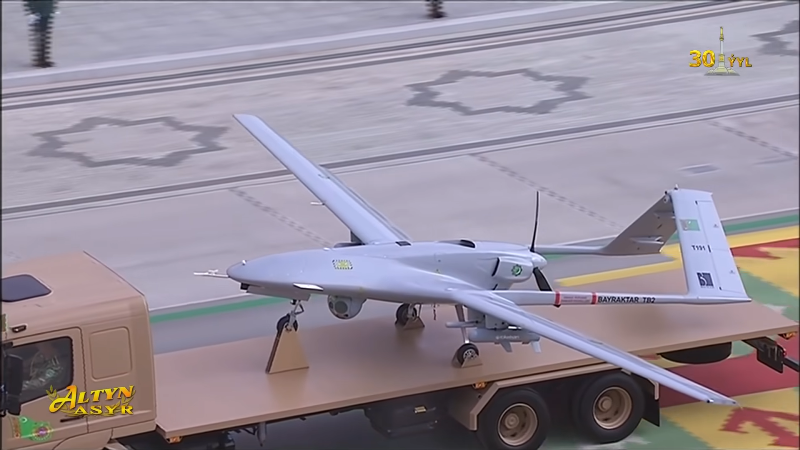 On June 27, 2022, the official twitter account of Baykar, the developer of the prominent Bayraktar TB2 unmanned combat aerial vehicle (UCAV), released a trilingual Turkish–English–Ukrainian announcement stating that it will send three TB2 drones to Ukraine free of charge, so that the funds collected through the “People’s Bayraktar” crowdfunding campaign would be directed to the “struggling people of Ukraine” instead. This gesture by Baykar, an influential private defense company, whose chief technology officer Selçuk Bayraktar is the son-in-law of Turkish president Recep Tayyip Erdoğan, seems to smoothen for a moment Ukraine’s disappointment over Turkey’s reluctance to join anti-Russian sanctions, stated by İbrahim Kalın, the presidential spokesperson, who claimed that sanctions would harm Turkey's economy more than Russia’s. This “drone diplomacy” remains an important tool to keep up the cordiality of Turkish–Ukrainian relations despite recurrent ups and downs reflected, for instance, in Turkey’s temporary block on Finland’s and Sweden’s NATO bid or alleged involvement of Turkish ports in transporting stolen Ukrainian grain.

Central Asia’s search for military unmanned aerial vehicles (UAV) started long before the current stage of the Russia–Ukraine war, and was shaped by two evident trends: the imminent rise of military drones, expected to take up a key role in future warfare, and Russia’s gradual lag in advanced military technologies and precision weapons. The latter would also be reflected in the overall fall of the Russian share in global military exports, according to the Stockholm International Peace Research Institute (SIPRI), the leading research institute on military expenditure and arms trade, Russia’s total arms exports in 2017–2021 (5 years) dropped by 26 percent compared to 2012–2016, while its share in global arms exports dropped from 24 percent to 19 percent for the same periods.

The global military drone market, which reached USD 4.4 billion in 2015, was dominated by the United States, China, Israel, Iran and Turkey, the last becoming the fifth state to develop and produce its own unmanned aircraft systems (UAS). Currently, the military drone market is valued at almost USD 12 billion and estimated to reach more than USD 17 billion in 2028. ANKA, the first Turkish indigenous military drone developed by the state-owned Turkish Aerospace Industries (TUSAŞ) was revealed in July 2010, while the first armed UAV Bayraktar TB2 completed fire tests in 2015. China had already advanced in military drone technology, having in 2012 at least three working UCAVs (CH-3, CH-4, and Wing Loong), with the stealthy UCAV to complete its maiden flight in 2013. In the meantime, Russia was planning to start the development of UCAVs as late as 2014, with flight tests to start only in 2017. On June 13, 2022, Yury Borisov, the former deputy minister of defense and current deputy prime minister, admitted that Russia was late in introducing military UAVs, and this problem became evident in Russia’s Syrian campaign. 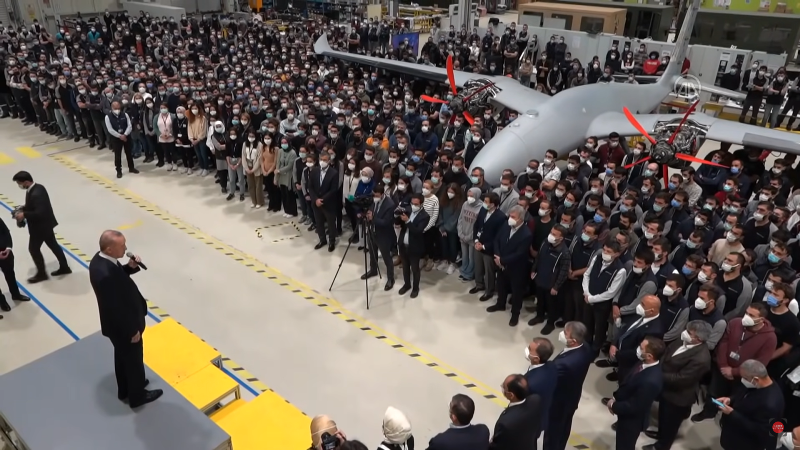 According to the SIPRI Arms Transfers Database, Central Asian states whose overall military spending in 2021 amounted to 1.8 billion USD, started ordering armed UAVs as early as in 2013 to be delivered from 2014 on, with Uzbekistan and Kazakhstan opting for Chinese Wing Loong-1, and Turkmenistan purchasing Chinese CH-3 and WJ-600 armed drones. At the same time, despite being a primary supplier of arms to the region, no UCAVs were ordered or delivered from Russia.

Even before the Russian invasion of Ukraine in February 2022 and ongoing war, which revealed the enormous lag of Russian military technology (especially in the fields of precision, guidance, and autonomous weapon systems, including unmanned aerial systems), the reputation of well praised and promoted Russian arms was already compromised during the recent conflicts in Syria, Libya, and Nagorno-Karabakh, where UCAVs played important part. Up until recently, Russia’s enormous media campaign to promote the image of Russian military modernization, which incessantly presented the country as the “global leader by the share of modern and modernized weapons,” seemed to start convincing even Western powers, as was the case of General John Hyten praising Russia for their “unbelievably powerful military” that transformed in the last 20 years, or the NATO Parliamentary Assembly discussing NATO’s lag behind Russia on certain defense technologies.

In 2018, Russia launched a media campaign promoting the anti-UAV capabilities of its army, followed by the formation of special anti-drone units, including in the Russian military bases in Kyrgyzstan and Tajikistan. Claiming that the Russian army gained broad experience in the Syrian campaign, numerous anti-UAV air defense and electronic warfare systems were introduced, some of which offered effective defense “against all existing UAVs” within the range of 100 km. However, during the Libyan civil war, nine of the newest Russian short-range air defense system Pantsir-S1s designed, among other things, for anti-UAV warfare were destroyed. Then, following the Armenia–Azerbaijan war in 2020, new Russian air defense and electronic warfare systems were severely criticized by the Armenian Prime Minister Nikol Pashinyan for their failure against Turkish and Israeli drones. The Russian electronic warfare systems, including anti-drone jamming systems, also seem to fare much worse than advertised in the current Russian–Ukraine war, as they were probably hyped “either to boost export sales or to impress Russia’s leaders.” 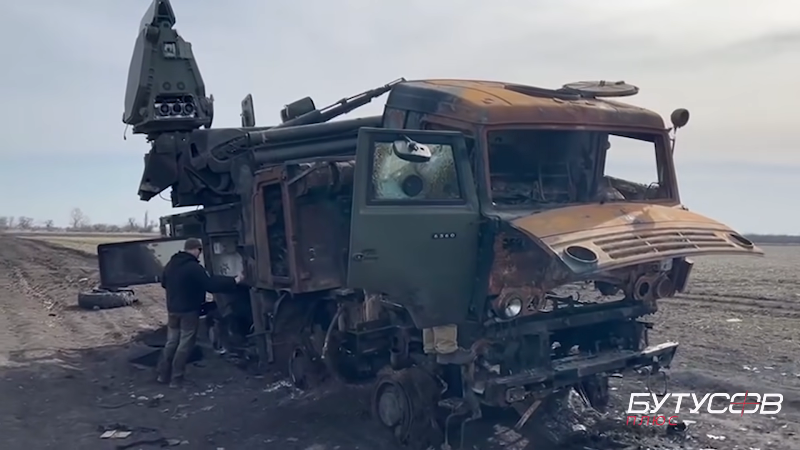 As Russian weapon systems were tested in combat around the world, often failing against armed drones, the traditional clients of Russian arms export in Central Asia were hastily trying to bridge the gap in unmanned aerial systems, since Russia did not offer any viable alternatives. After concluding a deal with the Israeli Elbit Systems in 2019 on joint production of surveillance and reconnaissance drones in Kazakhstan, the Kazakh Ministry of Defense sent a delegation in November 2020, just a few days after the end of Nagorno-Karabakh war, to the 14th Unmanned Aircraft Systems Base Command in Batman, Turkey, to evaluate the Bayraktar TB2 drones deployed there. This interest was interpreted as Kazakhstan’s attempt to “ditch Chinese UAVs” in favor of Turkish drones, which was rather a common case, since, despite affordable pricing, Chinese UAVs seem to have reliability and spare parts issues.  Indeed, since 2015, no Central Asian state has ordered Chinese military UAVs, while both Turkmenistan and Kyrgyzstan have Bayraktar TB2s ordered and delivered between 2020 and 2022.

However, Central Asia’s rush for armed drones did not always go smoothly, as the prospects of purchasing same Bayraktar TB2s for both Kyrgyzstan and Tajikistan — two neighboring states, whose lingering border conflict left 55 dead in the April 2021 clash alone — caused outrage in both societies. The matter seemed so vital that, despite deploying these armed drones for border control, the Kyrgyz side urged Turkey not to sell them to their neighbor, as Jeenbek Kulubayev, the current minister of foreign affairs revealed. Turkey's response to Kyrgyz urging to not sell armed drones to Tajikistan in the future remains unknown so far, but it was Iran that stepped in and launched the production of its Ababil-2 combat drones in Tajikistan on May 17,  2022, heating up the regional drone race. A few days later, Tajik president Emomali Rahmon visited Iran, strengthening the ties between the two “brotherly” nations. In the meantime, as the future of the Russian defense industry seems doomed due to sanctions and the current state of war with Ukraine, Kazakhstan decided to opt for joint a production line of Anka combat drones in Kazakhstan, while Uzbekistan already launched the production of its indigenous surveillance and attack drone.