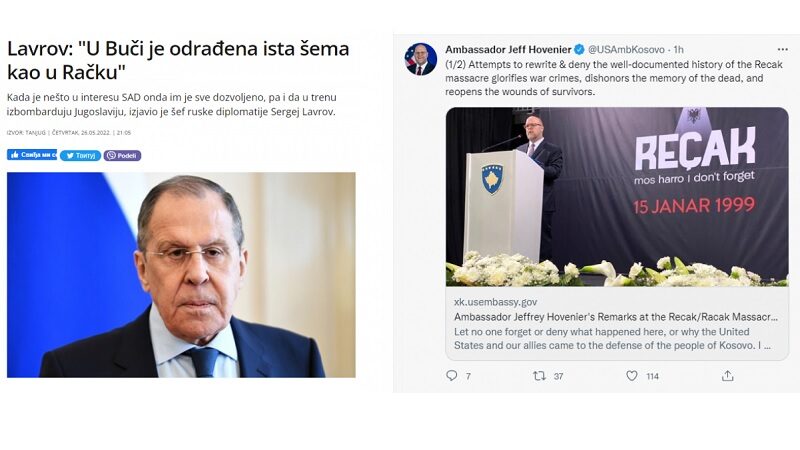 Collage of screenshots of the news article about interview of Russian Foreign Minister Sergey Lavrov and a tweet by US Ambassador to Kosovo, Jeff Hovenier. Fair use.

This story was originally published by Sbunker as part of the regional initiative Western Balkans Anti-Disinformation Hub. An edited version is republished in two parts by Global Voices with permission.

During the three months after Russia's aggression on Ukraine, Russian and Serbian officials continued to provide misinformation statements on Kosovo. A very important example during June came from Russian Foreign Minister Sergey Lavrov, who, in an interview with Russian state-owned news agency Sputnik, which was broadcast by Serbian media outlets, has denied the 1999 Račak/Reçak massacre in Kosovo.

The Račak massacre was the massacre of 45 Kosovo Albanians that took place in January 1999 in the village called Račak in Serbian and Reçak in Albanian, situated in central Kosovo. The massacre was perpetrated by Serbian security forces. After an international team determined that these deaths constituted killings of unarmed civilians, the bloodshed played a role in NATO's decision of direct involvement in the Kosovo conflict, conducting a series of tactical airstrikes against critical targets of military or strategic import in then-Federal Republic of Yugoslavia, consisting of Serbia and Montenegro.

During the interview, Lavrov was quoted as saying that it had been “discovered” that the bodies of those massacred in Reçak were not of civilians, but of soldiers whose clothes had been changed to look like civilians.

As all credible reports prove, the case of Bucha is clear evidence that retreating Russian troops  undertook a campaign of mass killings of Ukrainian civilians. It is also confirmed that the massacre in Reçak was a premeditated action of Serbian forces on Albanian civilians in Kosovo. 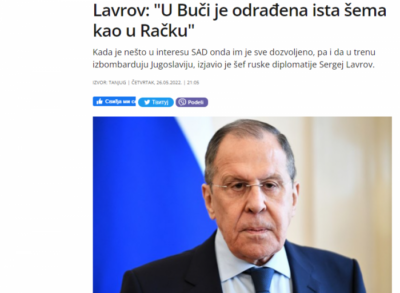 Screenshot of an article titled “Lavrov: The scheme worked out in Bucha is the same as in Račak” by Serbian media outlet B92. The tagline reads “When something is in US interest, everything is permitted, including the immediate bombing of Yugoslavia, stated the chief of Russian diplomacy Sergey Lavrov.” Fair use.

The US Ambassador to Kosovo, Jeff Hovenier, reacted to this statement by Lavrov.

(1/2) Attempts to rewrite & deny the well-documented history of the Recak massacre glorifies war crimes, dishonors the memory of the dead, and reopens the wounds of survivors. https://t.co/yv30XTSivW

“Those who deny the atrocities in Recak seek to impede progress towards regional reconciliation, democratic consolidation, and European and Euro-Atlantic integration,” Hovenier said.

Hovenier also attached to his post two OSCE and UNDPPA documents that substantiate the Reçak massacre.

On other occasions too, Russian officials have drawn parallels between Kosovo and the annexed regions of Ukraine. Even before the military offensive against Ukraine, President Putin, during a joint Kremlin conference with German Chancellor Olaf Scholz, mentioned NATO intervention in Yugoslavia in 1999.

This is not the first time that Russian and Serbian officials have denies or put a spin on the crimes of Slobodan Milosevic's regime during the years 1998–99 in Kosovo. Perpetrators of anti-NATO and anti-EU narratives in the Balkans often draw on misinterpretations of the events from the breakup of Yugoslavia and subsequent wars in the 1990s, spinning conspiracy theories that portray “the West” as culprit for the events that led to the loss of hundreds of thousands of lives and destruction of livelihoods of millions of people, including several millions refugees.