From left, Edi Rama, prime minister of Albania, with Ukrainian President Volodymyr Zelensky and Prime Minister Dritan Abazovic of Montenegro, in Kyiv, on June 15, 2022. Screenshot taken from the video provided by the office of Albania's PM, made available for public use.

This article was firstly published by Faktoje.al, a fact-checking organization in Albania, as part of the regional initiative Western Balkans Anti-Disinformation Hub. An edited version is republished by the Global Voices, with their permission.

Ukraine achieved the status of a candidate country to join the EU within less than four months of the application, as Russia's aggression continues. But, is this an indication that the membership process will be quick, or will it be subject to a prolonged wait, as is happening to the Western Balkan countries, Albania and North Macedonia?

“Albania, Montenegro and North Macedonia support granting the status of a candidate country for EU membership. On this European path, our countries are not competitors, they complement and strengthen each other's capabilities,” Ukrainian President Zelensky wrote on Facebook in mid-June, when Albanian Prime Minister Edi Rama and his Montenegrin counterpart Dritan Abazovic visited Ukraine to confirm their support for the intention of Ukraine to become a candidate country for membership in the European Union.

The prime minister of North Macedonia, Dimitar Kovacevski, who joined the meeting virtually, also expressed support for Ukraine's candidacy for the EU.

In a meeting with Ukrainian Prime Minister Denys Shmyhal, Prime Minister Rama reiterated, “Today we are here to vocally support Ukraine in its request to receive the status of a candidate country for the European Union.”

Long wait for the membership, no guarantee of success

Ukraine applied to join the EU four days after the Russian invasion, on February 28, 2022. For a country to join the EU, all existing member states must agree, and it must meet certain criteria. The agreement was reached and Ukraine received the status of a candidate for the EU on June 23.

The process of granting status to Ukraine took place at a record speed, the BBC reported. Candidate status is the first official step towards EU membership. But it can take many years to come together and there is no guarantee of success. And the Balkan countries, who are in a long wait to become part of the European Union, know this better than anyone. 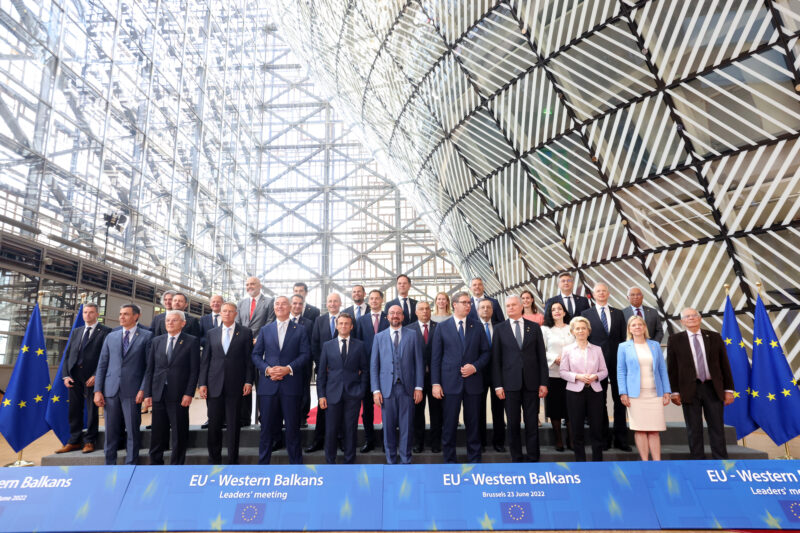 Family photo from the summit of Western Balkan countries and the European Union (EU) in Brussels on June 23, 2022. Photo by EU, for public use

In fact, Albania, North Macedonia, and Montenegro, which expressed their support for Ukraine's candidacy in the EU, are candidate states. While Montenegro, together with Serbia, is at the forefront of the membership process, opening the chapters of negotiations, Albania and North Macedonia are stuck. This is because of Bulgaria's veto; the EU member state has held back North Macedonia's aspirations due to long-standing disputes over the language, history and rights of the Bulgarian minority in North Macedonia. Albania has suffered from the obstacles that Sofia creates for Skopje, since the process for both countries runs parallel.

Welcoming the granting of EU candidate country status to Ukraine, but also to Moldova, the prime ministers of Albania and North Macedonia, Rama and Kovacevski, who went to Brussels on June 23 to meet EU leaders, did not hide their disappointment that their countries are blocked when it comes to the integration process. Rama specified that Ukraine and Moldova should have no illusions. He noted that Albania and other Balkan countries have had candidate status for years, North Macedonia since 2005 and Albania since 2014.

“This issue of Bulgaria is a shame, a NATO country that takes two other NATO countries hostage, while there is a war in the yard of Europe and under the eyes of 26 countries that are completely powerless together,” Rama said.

The Macedonian Prime Minister Dimitar Kovachevski did not hide his disappointment either:

“The Republic of North Macedonia has been a candidate country for 17 years… But here we are today and the negotiations have not started yet. I will be direct, what is happening is a serious problem and a serious blow to the credibility of the EU.”

On the second day of the summit, Bulgaria conditionally lifted its veto, but the process was not unblocked. Now, Skopje has to ponder the idea of making another compromise, as it did with the name change. A proposal from France, would have Skopje include ethnic Bulgarians in its constitution “on an equal footing with other peoples” and change history textbooks. Bulgaria claims the Macedonian language is a dialect of Bulgarian, and both countries lay claim to certain historical events and figures, mainly from the Ottoman era.

The French proposal however was met with protests in Skopje, opposing it. Opposition party VMRO-DPMNE and its supporters reject the French plan, saying it concedes too much to Bulgaria in a dispute over history, language, identity, and culture.

Can Ukraine join the EU before Albania and North Macedonia?

Despite the difficult journey so far and the waiting “fatigue” of the political elite, public support in Albania for the country's membership perspective continues to be solid. A poll conducted before the outbreak of COVID-19 pandemic showed that 97 percent of Albanians are in favor of EU integration. But would the fact that the negotiations did not start this June affect the support that Albanians have for the EU, and is there any fatigue from this long wait?

In a statement to Faktoje.al, Gledis Gjipali from the European Movement in Albania stated that he sees the fatigue more in the public administration, which should advance the reforms and be fully engaged in the process.

“It has already been a period of several years that, although there are trainings and simulations, work plans are revised, new structures are created, it is still not known when the negotiations can begin. This has led to discouragement and lower expectations from the process. As for the citizens, and according to the latest polls, there is no decrease in support for membership, it remains as high as in the last 15 years.”

The support figures for the European integration are not the same in North Macedonia. Public support for EU membership has been falling steadily for more than a decade and now stands at 68 percent.

Macedonian journalist Tanja Mileska, who had been covering the issues of European Union integration as long term correspondent from Brussels, expressed doubts that Ukraine will progress very quickly compared to Albania and North Macedonia. She explained:

“The candidate status that was given to them is mainly a symbolic gesture, but for example they are not included in the Pre-Accession Instrument. The EU institutions have rushed to grant this status to send a political message, but in the background nothing is ready to make these countries part of the Union, especially Ukraine, which is a large and highly populated country, whose membership would mean a serious shift of power in Eastern Europe. I'm not sure that Western Europeans are ready to accept it easily.

For Gledis Gjipali, granting candidate status to Ukraine only 100 days after the application is a strong political gesture, but one that, according to him, will have positive effects on the Western Balkans as well.

“However, the finalization of Ukraine's membership will take a long time and there are many obstacles. We must be ready in this spirit of solidarity that is being created due to the war in Ukraine to take a qualitative step in the process and have the arguments that the internal reforms and the Europeanization of the country are of the right quality and speed,” Gjipali added.