Ukrainians and Buryats share a history of Russian abuse 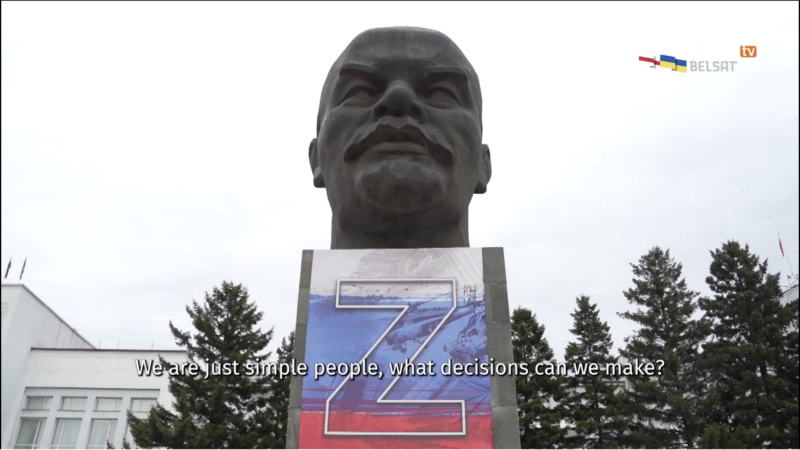 Screenshot from a YouTube report by Belsat English, interviewing residents of the Republic of Buryatia about the Russian invasion of Ukraine.

Since Russia’s invasion of Ukraine on February 24, 2022, Russia’s poorest regions have faced disproportionate losses in the war. Both within and outside of Russia, the people of Buryatia and Dagestan, primarily because of their non-Slavic appearance, have become overwhelming associated with the war. As the families of the soldiers in Ulan-Ude (the capital of Buryatia) wait for their sons to return from one of the few jobs available in the region, the Russian government continues to emphasize national unity — all the while refusing to invest in education, heritage preservation, infrastructure, or economic opportunity.

Similar tensions have arisen in the liberal wings of Russian civil society. On June 2, the opposition news publication “Популярная политика” (Popular Politics) previously based in Moscow and currently in Latvia, released a video criticizing Russian atrocities in Ukraine. In a video titled “Russia under garbage | Ukrainian Children are Dying | Pirates of the Azov Sea,” Olga Guseva, host of the organization's YouTube channel and member of the Navalny team stated:

Those people who went to fight [in Ukraine], they are, in my opinion, not the best part of Russian society. Excuse me, but it is the poorest slice of society — that includes Buryats, who are relative to the Russian population are some 600,000 people or something… we shouldn't equate Russian citizens who are not participating in and not supporting the special operations with those who are actively fighting.

Despite ending up on opposite sides of the war, Ukrainians and Buryats have been subjected to the same imperial treatment: erasure of language, history, and political self determination. The Republic of Buryatia is located in Russia's far east and on the shores of Lake of Baikal. Historically tied to the Mongols, the region was incorporated into the Russian Empire in the 18th century. In 1923, it became an autonomous republic within the Russian Soviet Federative Socialist Republic. With a total population of 970,000, two-thirds of the Republic of Buryatia is made up of ethnic Russians; ethnic Buryats constitute a minority 30 percent. According to the official government census, there are 461,389 ethnic Buryats spread across Siberian regions.

The Russian Federation’s losses in Ukraine continue to be veiled in secrecy. While definitive estimates remain impossible, many of the ongoing counts note the war’s disproportionate impact on Russia’s poorest regions. Mediazona, in collaboration with the BBC, has estimated Russian casualties at 3,798, based primarily on “publicly available reports–including social media posts by relatives, local media reports, and local authorities’ statements.” The overwhelming majority of the soldiers were under the age of 23. Russia’s poorest and most distant regions, particularly Dagestan and Buryatia, have suffered the greatest losses, 207 and 164 respectively. Based on Mediazona’s analysis, both Moscow and St. Petersburg only have 34 casualties.

People of Baikal, an independent news organization which aggregates social media and newspaper funeral notices, reports 191 soldiers dead across Buryatia and neighboring Irkutsk region. While official estimates do not distinguish between ethnicities in casualty counts, Buryats have been publicly singled out.

Artem Sheinin, the host of the show “Time Will Tell” on Channel One, started the broadcast in early March with an unexpected address to Russian soldiers in Ukraine. “When a large Russian people, consisting of Russians, Chechens, Dagestanis, Mordovians, Buryats, came to the aid of the Ukrainians… Yes, it was hard, but we will do it. Work, brothers, and when our brothers are working, what are our brother without Buryats! So work, brothers Buryats!”

Complicated attitudes across the region

Buryatia is divided over their loyalty to Putin and Russia, and opposition to the war. In one incident at the Buryatia Opera and Ballet Theater — first reported by opposition media outlet banned by the Russian government, Meduza — a verbal fight broke out over Russian racism and the high sacrifice ethnic minorities have had to bear. Since late March, Ulan-Ude has buried at least one soldier from Ukraine a day. The feelings towards the war across the region, or abroad, are far from a monolith, reflecting the entangled attitudes and identities across Russia and within Ukraine.

The region’s largest archery range, where children continue to practice, has been turned into a funeral home. The ceremonies staged there by the military permeate with echoes of support for the “special operations” and “denazification” of Ukraine. At a funeral service in the region, Deputy Head Bayir Tsyrenov lamented, “they did not die for nothing, they died so that Russia could be great. So that the bloodshed in Ukraine would come to an end.” Mayor of Ulan-Ude, Igor Shutenkov continued, “they died protecting the freedom and future of our country.”

Public displays of support for the Russian invasion in Ulan-Ude have been continuously met with vandalism. A Russian flag with the letter “Z,” a nascent national symbol of “special operations” in Ukraine, was cut in the middle of the night. On April 26, a woman demanded the letter “Z” be removed from the public minibus, before being taken by the bus driver to the police station. A lawyer in Chita who wrote critical posts on social media and wore a green ribbon in opposition to the Russian invasion was fired from her job and charged with three offenses: dissemination of fake news, discrediting of the Russian army, and promoting Nazism.

Dissenting voices in the Buryat diaspora

All the organizations and individuals that have spoken out against Russia’s war in Ukraine have been prosecuted into silence. Thus, vocal domestic opposition has remained in the shadows. Simultaneously, the Buryatia diaspora has become a vocal opponent to the war.

The Free Buryatia Foundation, formed in early March as a response by ethnic-Buryats across the world, has worked to carry the message of opposition for those who cannot do so within Russia. On March 15, the foundation published a short video emphasizing Buryat’s stance against the war.

Alexandra Garmazhapova, co-founder of the foundation noted, “We got a million views and we were very surprised by the feedback. From Russian media it seemed like Buryatia was very much in support of the war, and we were nervous those in the country would be offended by the video. But very much the opposite, many in the region said they are glad they weren’t the only ones! Thousands of Buryats from the diaspora have reached out to us.”

As the families of soldiers began contacting the foundation for support with ending contracts and returning prisoners of war, the foundation also opened a legal fund. In response to the overwhelming support, Garmazhapova emphasized, “We got lawyers to support in this work. We started keeping detailed data about how many have been killed and about how many have been taken prisoner. Buryats abroad started going out to protests with signs saying they are against war. We formed a humanitarian aid fund.”

Garmazhapova concluded, “Why are there Buryat soldiers in Ukraine? We believe this situation can be explained by the financial situation of the region. Of course we are not absolving them. It is still a choice to join a war, but Buryatia is practically the poorest region in all of Russia.”

The region faces a particularly grim employment outlook. The average monthly salary is about RUB 44,000 (USD 802), approximately one third of the average salaries in Moscow and St. Petersburg. The cities of Ulan-Ude and Chita are the most polluted cities in Russia and continuously rank as having the worst quality of life across the nation. A recent high school graduate has three job prospects: go to Moscow or St. Petersburg, work in a mine, or join the military.