More than 40 dead and hundreds arrested in GBAO 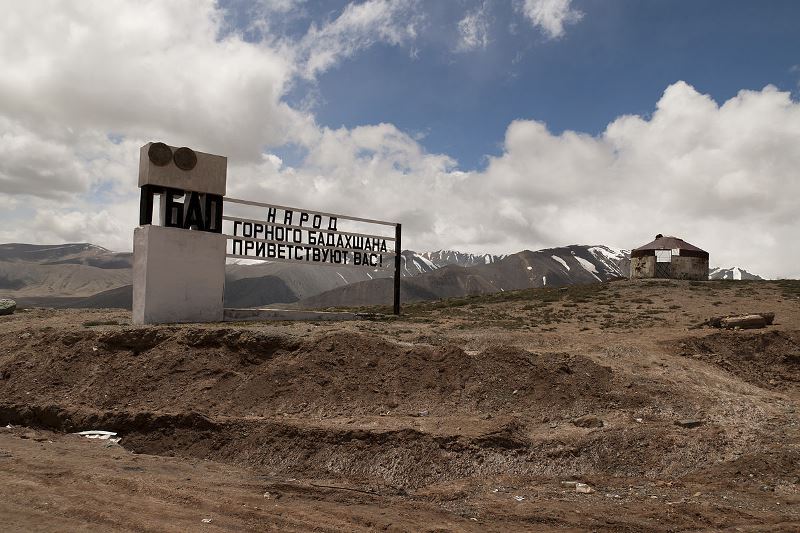 “Greetings from the people of Gorno-Badakhshan” says a Soviet-type installation at the Kyrgyz-Tajik border. Photo by Hylgeriak via Wikimedia (CC BY-SA 3.0).

On June 15, 2022, after a month-long violent crackdown against Pamiris in the Gorno-Badakhshan Autonomous Region (GBAO) in eastern Tajikistan, which claimed more than 40 lives within a couple of days and saw hundreds arrested, more than 30 trucks loaded with military personnel were reported to be leaving the restive province over the three days, in the time for a visit of the US Central Command Commander General Michael E. Kurilla to Tajikistan. Two days later, on June 17, the Interdepartmental Headquarters for Security and Public Order in GBAO, the region that borders Afghanistan, China and Kyrgyzstan, officially reported that all activities of the “organized terrorist groups” in the region had been put to an end, adding that 220 people were arrested and 16 others, who put up armed resistance, were killed.

Previously, on June 12, 2022, Khursand Mazorov and Zoir Rajabov, two prominent informal leaders in GBAO, were killed in the region’s capital Khorog during “a special operation,” as they allegedly put up armed resistance and refused to surrender. The two men depicted in government reports as “leaders of an organized crime group,” were indicted on a variety of charges, including terrorism, murder, drug trafficking, and arms smuggling. They also, according to the government report, had in their possession as many as 11 assault rifles, 9 anti-tank rocket launchers, 2 machine guns, 2 sniper rifles, and numerous other weapons and ammunition. The two men were among 12 “organized crime group leaders” that were arrested, detained or killed in law enforcement operations carried out “with the consent and in close cooperation with local population,” as the official report claimed.

The primary goal of the current violent suppression in GBAO seems to be the ultimate crackdown on the so-called “informal leaders” of the ethnic Pamiri minority, who, unlike most Tajiks, belong to the Ismaili branch of Shi’a Islam. The informal leaders, sometimes referred to as “authorities” (авторитеты), who participated in the 1992–1997 civil war in Tajikistan on the side of the United Tajik Opposition (UTO) against the forces of the current president Rahmon, were initially integrated into governmental structures following the 1997 peace agreement, receiving important posts in regional police and security bodies. Ever since, however, the president has systematically tried to eliminate political opposition, as he perceived the ex-UTO activists as a direct threat — particularly the members of the Islamic Renaissance Party of Tajikistan (IRPT). Thus, as far as governmental control is concerned, GBAO remained the most unruly and disobedient province in Tajikistan due to its unique geographic position, ethnic and religious composition, and harsh socio-economic conditions. It is often said that the Pamiris “differed from other Tajiks” not just in their distinct language and religion, but also by familial affiliation and solidarity, patrilocal networks, or even blood feuds. 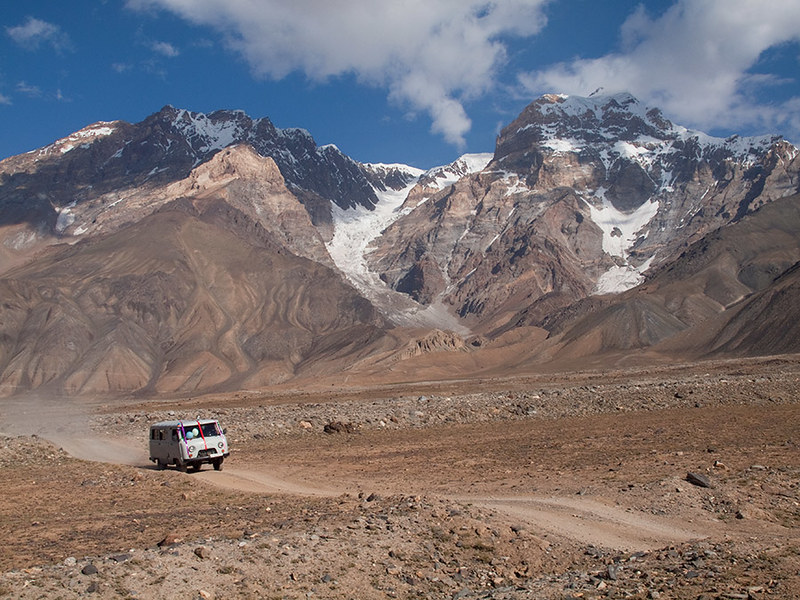 A scene from Roshorv, a village in Bartang valley, GBAO. Photo by Evgeni Zotov via Flickr (CC BY-NC-ND 2.0).

As GBAO has long been the region with the highest poverty rate, highest unemployment rate and highest food prices, and electricity prices three times higher than those across Tajikistan, most families in the region survive on remittances sent by family members from abroad, primarily Russia. However, due to the ongoing Russian–Ukrainian war and subsequent economic sanctions, remittances that made up 27 percent of Tajikistan’s GDP in 2020 are expected to decline by 22 percent, as the World Bank estimates. In this regard, the existing power structure in this isolated region seemed to be vital, as “informal leaders” were regarded by the local population as “philanthropists, providers of basic services, and protectors of local interests and values,” who “mediate local disputes and help the needy.”

Ever since the end of the civil war, the central government made a habit of recurrently accusing the informal leaders of drug trafficking, tobacco and gem smuggling, as soon as protests or violence broke out in the region, accusations thrown well into 2018. Drug trafficking claims would soon become a matter of utmost importance, since drug trade was claimed to provide 20–30 percent of Tajikistan’s GDP. In recent years, however, the accusations became much graver, extending from drug, tobacco, and gem smuggling to murders, arms trafficking, and even terrorism. Thus, the official accusations following the arrests on June 11, 2022, of the three informal leaders — Talib Ayombekov, Niyozsho Gulobov, and Munavvar Shanbiev — included murder, robbery, drug and arms smuggling, mass unrest, and stirring up territorial strife.

Despite the fact that recurrent protests and outbursts of violence in GBAO are often attributed to its mainly inaccessible and uninhabitable terrain, as well as poverty, some see them as natural popular reaction to violence and aggression on the part of security services, such as military operations leading to civilian casualties (2012), sexual assault or misconduct by members of the security services (2013), or use of excessive force against unarmed civilians (2014). Similarly, the protests in Khorog in November 2021 were instigated by the murder of 29-year-old Gulbiddin Ziyobekov, who, according to the official report, was shot upon armed resistance, although the local sources and video footages incline towards arbitrary execution. Ziyobekov was wanted for battering the deputy prosecutor upon his sexual harassment of a local woman, for which, according to local witnesses, the deputy prosecutor later publicly apologized. 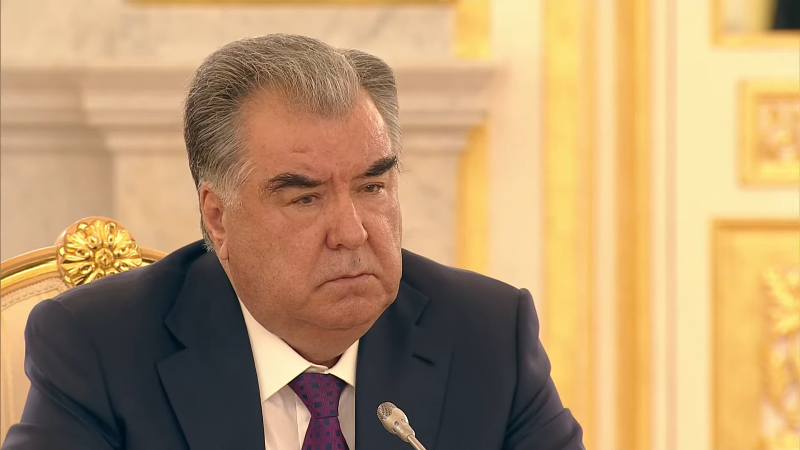 As is often noted, the government's response to recurrent protests and riots in the region is almost exclusively confined to the use of force and coercion, totally ignoring dialogue, which became especially evident in the last decade. As the political history of post-civil war Tajikistan is often described as a systematic attempt by president Rahmon to eliminate political rivals, creating, in the meantime, an appearance of peace and national unity, GBAO became the major obstacle to its realization. On top of that, the 69-year-old president, who is currently the longest serving head of state in the post-Soviet space, taking into account interim or acting posts, and who ironically holds the official title of the “Founder of Peace and National Unity” (Асосгузори сулҳу ваҳдати миллӣ), seems to be worried about the transition plan for his power, primarily based on “relatives and residents of his native region of Kulob.“

Before the 2020 presidential elections, where Rahmon was elected for his fifth term, the constitution was amended to allow those 30 years of age to run for president, opening the way for his son, Rustam Emomali, 34, who currently serves both as a mayor of the capital Dushanbe, as well as the chairman of Majlisi Milli, the upper chamber of Tajikistan’s parliament, the post that overtakes presidency in case of  death, resignation or incapability. However, as transition plans can go out of hand — the ousting from key positions or even arrests of the family members of former presidents of Uzbekistan and Kazakhstan serve as a reminder — the transition is not expected to be smooth, especially at the time of economic downfall, growing security concerns followed by the Taliban takeover in Afghanistan and Russia’s ongoing war in Ukraine. In the meantime, Rustam Emomali, the apparent successor severely criticized for a lack of managerial and communication skills, was rumored to be the mastermind behind the bloody repressions in GBAO in May, while his father was off to Moscow on an official visit.