Incoming Chief Executive John Lee will be inaugurated during the celebration 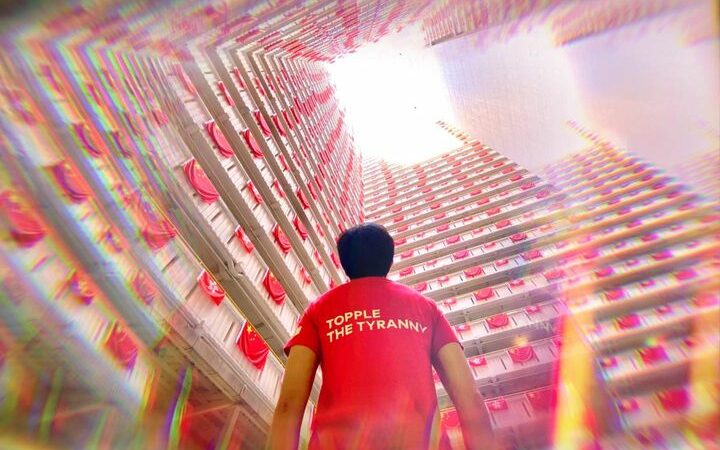 Chinese President Xi Jinping is expected to attend the grand celebrations. On the same day, the incoming Chief Executive John Lee will pledge allegiance and receive the blessing of China’s top leader at his inauguration.

Conventionally, the civil society would rally on July 1 to protest and voice their discontent. But after two years of crackdowns under the National Security Law (NSL), the city will be protest-free as national security authorities warned activists of the severe consequences, as @XinqiSu from Agence France-Presse (AFP)  reported on Twitter:

#BREAKING LSD [the League of Social Democracts] president Chan Po-ying said some of the LAD volunteers and friends were summonsed by NSD [National Security Department] for chats today. “After an evaluation of the situation, we won’t conduct any protest on July 1. The situation is very difficult so we can’t disclose any more details.”

Yet, the city remains on high-security alert. Several media outlets were barred from reporting on the celebrations and John Lee’s inauguration. A dozen journalists from accredited media outlets also had their applications to cover the event rejected for security reasons.

Ahead of the celebrations, security zones have been set up in Admiralty and Wan Chai North and the area around the ceremony venue will be sealed off from June 30 to July 1. Aircraft and drones will also be banned in restricted flying zones.

Since Monday, June 27, current and incoming top officials who would attend the celebrations have checked into hotels, isolated themselves in their offices, and conducted regular PCR tests as part of the pandemic control measures.

Hong Kong has an average of 1,500–2,000 positive COVID-19 cases daily. The social distancing measures would be extended to July 14, which means that there won’t be any public celebration of the annual event.

A sea of red flags

To represent Hong Kong’s return to China, the city has been decorated with China’s national flags and Hong Kong’s regional flags. The most spectacular scene was in Ping Shek Estate, a public housing compound for lower-income families in East Kowloon.

Other visual presentations include the Chinese palace lantern exhibition and harbour light show, which were shared by Chinese government-affiliated accounts on Twitter:

A large-scale Chinese palace lantern exhibition has been held in the Central district of #HongKong SAR to celebrate the 25th anniversary of Hong Kong's return to the motherland. #HK25pic.twitter.com/IMHHr1hu6y

Hong Kong light show in celebration of the 25th anniversary of its return to the motherland. #HK25 pic.twitter.com/DOT4guqrtb

There have also been patriotic performances from regular citizens. Major local television channels have been showing the 25th-anniversary theme song “Heading forward” performed by local popular singers for weeks leading up to the event:

The Education Bureau also invited 11 elite elementary schools to have their students participate in the production of a music video, “My motherland and me,” to celebrate the anniversary of Hong Kong's return to China:

Hong Kong had become a British colony in 1842 after an unequal treaty was signed between the government of the Qing Dynasty and the British Empire at the end of the First Opium War. The territories of the colony were further expanded via two other unequal treaties signed in 1860 and 1898.

Under the Sino-British Joint Declaration, a diplomatic agreement signed in 1984 between China and UK that guarantees Hong Kong would enjoy a high degree of autonomy governed by Hong Kong people for at least 50 years, the city’s sovereignty was handed over to China on July 1, 1997.

The handover agreement triggered waves of massive emigration out of the city in the 1980s and 1990s. As for the elites who chose to stay, they have been advocating for political reform since the early 1980s hoping that China would allow the city to steadily democratize according to the time frame layout in the Basic Law. But their dreams were crushed by the new electoral rules introduced by Beijing in 2021.

🇨🇳 China rewrites history by creating new textbooks to teach children that Hong Kong was never a British colony, and “thus there was no so-called self determination.”

The “political correctness” in rewriting history has created some confusion on the significance of the July 1 celebrations:

Hong Kong was never a colony of the evil British Empire… wait, then why celebrating the “return”?