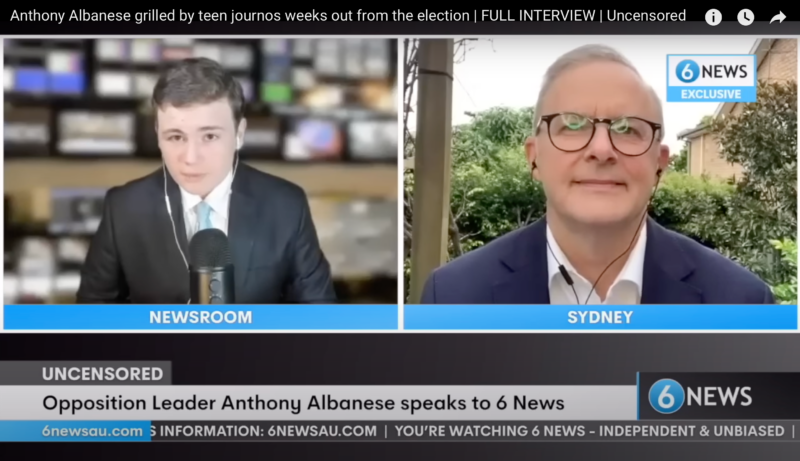 Leonardo Puglisi is a force of nature. The 14-year-old leads a young team of reporters from around Australia and overseas for 6 News, an upstart news program. It presents itself as an online alternative to the mainstream media while offering similar services such as up-to-date news, long-form interviews, a flagship political program, SpinCheck, investigative reports, and fact-checking.

6 News started in 2019 as “HMV,” covering local news in the Melbourne district of Hawthorn on YouTube. It has since broadened its scope to focus on international and national news.

Their Patreon account has 242 paying patrons, while their YouTube service has nearly one million views and 14 thousand subscribers so far. They recently posted a conversation with Prime Minister Anthony Norman Albanese, which has garnered over 20,000 views. His personal Twitter account has nearly 35,000 followers, and 6 News can boast 20,000.

6 News features a collection of mainstream media television and radio interviews, plus news articles. For example, the Age newspaper reported a scoop two years ago:

A 12-year-old schoolboy has been dubbed possibly Melbourne’s youngest journalist after his “scoop” about the demolition of a 19th-century school bell tower. Year seven student Leonardo Puglisi was on the scene at 6pm on Wednesday to report the removal of the much-loved, 135-year-old school symbol at Hawthorn West Primary School, in the city's inner east.

As part of his January 2020 coverage of the Australian bushfires, Leo reported from the nation’s capital, Canberra. It includes another reporter, family member Sebastian.

An interview with a 16-year-old Trump supporter is another original and powerful video.

Leo and 6 News obviously have many admirers, including professional adult journalists:

Mate, I’m just seeing your broadcasts now and they are bloody fantastic! I tried doing what you’ve done when I was young and got nowhere near your professionalism. You’re amazing. Well done. Can’t wait to see what you do next! @6NewsAU

However, he attracts more than his fair share of online criticism. Some are clearly misinformed, with some detractors not realizing he is well below voting age. His age is a continuing meme on social media:

also 14yos are notorious for not staying up late at night https://t.co/LKcGrR19rg

hi all, pls report @katherinedeves_ – this is getting out of hand

also ive got plenty of friends you loser pic.twitter.com/FdPNxzeXOg

This Twitter account is named after an unsuccessful Liberal Party candidate in the May 2022 Australian election, Katherine Deves. She was strongly supported by the then-Prime Minister Scott Morrison and was highly controversial for comments she made which many described as transphobic. She has since left Twitter after posting a post-election tweet about transgender people.

As this encounter shows, Leo is not afraid to join the fray on social media. This exchange with a Victorian State parliamentarian is a typical example:

Leo has interviewed many of the big names in Australian politics, including then-Prime Minister Scott Morrison and opposition leader and now Prime Minister Anthony Albanese.

Ukraine’s President Volodimir Zelensky is currently at the top of his wishlist. With Leo’s energetic approach, it should not be too long before we see them in conversation.

Global Voices spoke to Leo about his experiences so far and hopes for the future on June 23, 2022:

Leo and his team join the ranks of other young Australian trailblazers such as Abbie at Her Magazine and Jack, Darcy, and Wesley at COVIDBaseAu.