Harmful propaganda hides the truth about the 1998-1999 Kosovo War 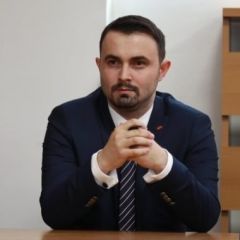 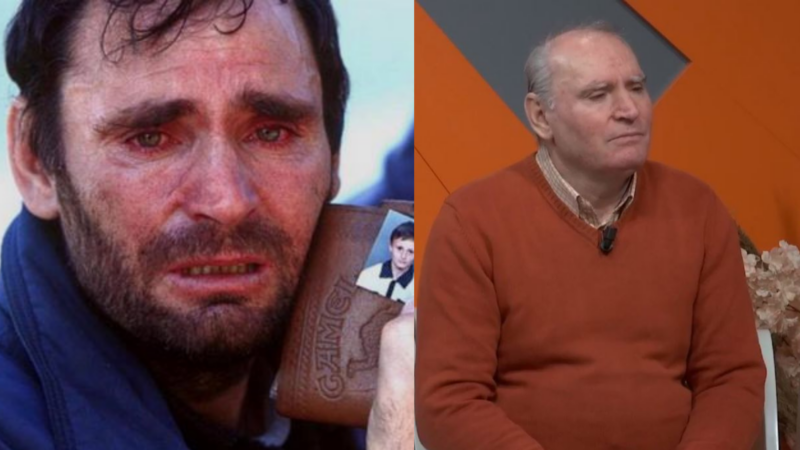 Mustafa Xaja from Kosovo in 1999 and 2021. Images based on screenshots from a famous photo taken during the Kosovo War and from a video interview by T7 TV.

“NATO's intervention in the Kosovo war was not fair.” This is the narrative that Russian and Serbian propaganda want to build.

This was reemphasized by Russian President Vladimir Putin when he referred to the NATO intervention in the Kosovo War after his February 15 meeting with Germany’s Chancellor Olaf Scholz in Moscow. At this meeting, according to an article on the EuroNews website, the “Russian leader insisted he [did] not want a war around Ukraine, after weeks of tensions fueled by a massive deployment of Russian troops.”

The crafting of this narrative became even more relevant as the Russian war on Ukraine escalated on February 28.

Through various manipulations, the Russian and Serbian propaganda campaign seeks to strengthen this point of view and change the truth about the 1998-1999 Kosovo War as it suits them. Such disinformation is also spread in neighboring Montenegro as well as Bosnia and Herzegovina. In order to stop the humanitarian catastrophe that was developing in Kosovo at the time, NATO intervened and began an aerial operation known as Operation Allied Force in March 1999.

Since then, Serbian and Russian propaganda has periodically tried to push a narrative that raises doubts about NATO's intervention. This includes, but is not limited to abuse of images of victims of ethnic cleansing, misrepresenting them as victims of the West, i.e. the NATO intervention that actually stopped that ethnic cleansing and bloodshed in the Balkans.

This is usually meant to justify Russian aggression on Ukraine, or to justify the wars led by the regime of Serbian authoritarian leader, Slobodan Milošević in Croatia, Bosnia and Kosovo. A recent instance is Russian Foreign Minister Sergei Lavrov's denial of the 1999 Racak Massacre as part of a disinformation narrative aimed at relativizing the Bucha massacre of over 1,000 citizens of Ukraine by Russian occupiers during March.

This tendency is not new. In 2019, the director of the Belgrade-based Center for Euro-Atlantic Studies Jelena Milić warned that the Kremlin, Russian state-sponsored media Sputnik and their proxies systematically spread disinformation about the events related to the NATO intervention.

Analyst Daniel Sutner warned about these kinds of narratives in 2020 in an article on disinformation in the Western Balkans, published by the NATO website:

Kremlin-sponsored media content in the Serbian language is produced, republished and disseminated widely throughout the region. It is consumed by millions in societies with inherent fragilities and internal divisions, in a region which traditionally has a positive attitude towards Russia and where perceptions are still influenced by the ethnic conflicts in the 1990s and NATO’s Kosovo Air Campaign in March 1999. Unlike Eastern-flank EU and NATO member states, the region lacks negative historical experiences with Moscow and shares a common Orthodox religion.

A particular case of misinformation related to Kosovo is based on exploiting once-famous photos from Kosovo, presented in previous writings.

An example shows another manipulation that, again, has its origins in the Kosovo war and the NATO intervention in March 1999. A two-year-old Albanian child from Kosovo who was killed by the Serbian army is presented as a victim of NATO bombing, in a text published on the Russian website College36. 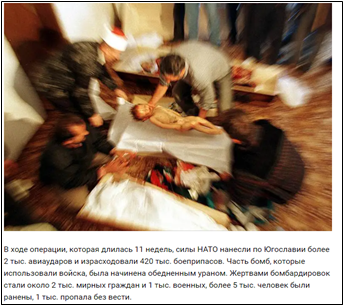 Screenshot from the Russian website COLLEGE36.RU, with a manipulated inscription.

To deconstruct this disinformation we needed to verify the photo and, using a search on one of the platforms or tools that enable photo verification, “Google Lens,” “Yandex Images” or “TinEye,” we got to understand the truth about that photo.

In fact, the photo is not of a Serbian child, allegedly a victim of the NATO bombing. This photo, taken in 1998 by Pulitzer Prize winner Yannis Behrakis and originally published by Reuters, actually shows an ethnic Albanian parent from Kosovo placing into a coffin the body of his child, who was killed by Serb forces. 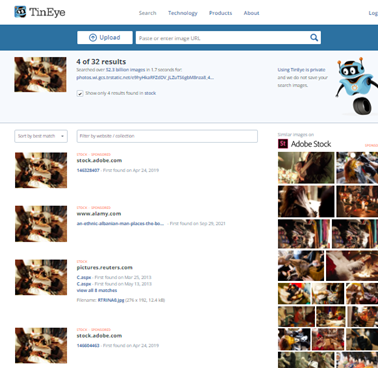 Manipulations like this are not done only by the media or the Russian state, from Putin to public statements of high officials of the Russian Ministry of Foreign Affairs to tweets by official accounts of Russian embassies around the world (including South Africa). This is also done through other communication channels, whether through social media sites or even by established Russian writers who had published books of prose or poetry. Such was the case with context manipulation of a photograph of Mustafa Xaja, an ethnic Albanian from Kosovo. 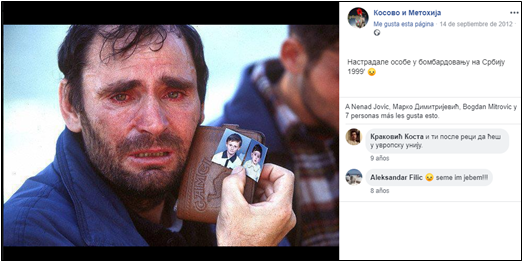 Manipulated description of the unattributed photo: ‘Victims of the 1999 bombing of Serbia.’ Screenshot from the Facebook page Kosovo i Metohija.

In 2012, a Serbian Facebook page named Kosovo i Metohija republished a Reuters photo with the caption, “Victims of the 1999 bombing of Serbia.” The same picture with the same misleading information had been used two years later by a Moscow writer, Nadezhda Miroshnichenko on her profile on V Kontakte (VK), a Russian social media platform that is similar to Facebook, which is used by millions of Russian-language speakers. However, the truth about this picture is different from the propaganda being promoted on these two media sources.

“The Albanian, Mustafa Xaja, from the city of Mitrovica in Kosovo shows photos of his two children who he fears were killed by Serbs during the war in Kosovo in 1999,” reads the caption of the photo by Peter Turnley, originally published in 1999. Even the man in the photo, proves this, 22 years later, when he was interviewed on the morning program on T7, a TV station based in Kosovo.

As with the case of the funeral of the child and other members of his family, Mustafa Xaja's story, and the photo of him are easily verifiable with one of the aforementioned image-search platforms.

Presenting cases such as these with the possibility of current or subsequent abuse by Russian or Serbian diplomacy with a disorienting and misinformative effect is harmful, not to mention dangerous, for the state of Kosovo and its image.

Particularly harmful and dangerous is the spread of this misinformation in countries where there is not much knowledge about the case of Kosovo. An example of this is a tweet on the official profile of the Russian embassy in South Africa, which published an altered photo of the Albanian refugee, Sherifa Luta, fleeing Serbian forces and misrepresented her as a Serbian survivor of the NATO bombing.

In the new wave of Russian disinformation, after the new situation created by the ongoing full-scale invasion for the occupation of Ukraine, the name of Kosovo may be used in misleading and malicious ways again and maybe, in spreading biased and false narratives that misrepresent recent history. Kosovo institutions should, therefore, mobilize and react to these false narratives; otherwise, we risk letting the truth be blurred and undermined while deceit and lies abound.