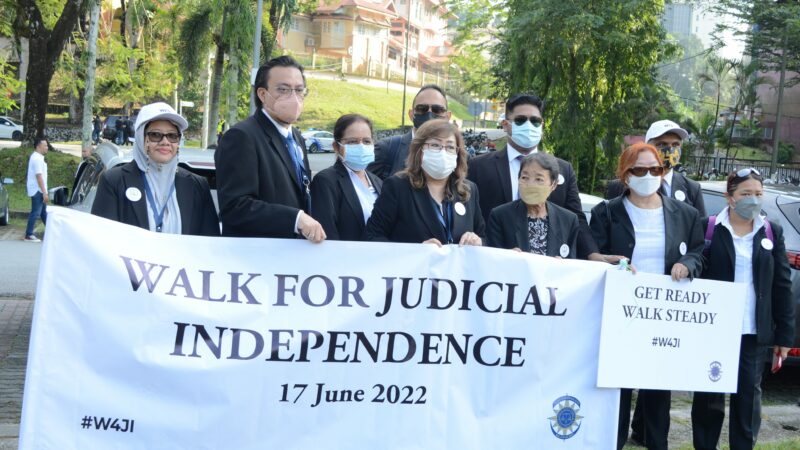 The police have summoned leaders of the Malaysian Bar Council for their role in organizing the “walk for judicial independence.”

On June 17, around 500 lawyers gathered near Parliament to deliver a letter to the Prime Minister about upholding judicial independence. The letter expressed concern about the actions of the Malaysian Anti-Corruption Commission (MACC) which informed the public through the media that it was investigating Court of Appeal judge Nazlan Mohd Ghazali for having an “unexplained” sum of money — one million ringgit (227,160 USD) — in his bank account.

The letter clarified that it is not wrong to investigate judges, but it should not erode judicial independence.

…we firmly maintain that any investigation … ought to be conducted without eroding judicial independence and public confidence in the existence of an independent Judiciary that will uphold justice in the process of administering justice.

It condemned the MACC for the way it announced its investigation.

…the unprecedented manner in which the MACC has publicly announced the commencement of the criminal investigation of a Superior Court Judge and disclosed the name of the judge to the public, for an indefinite period and without any proper decision or closure, which is tantamount to an act of intimidation against the Judiciary.

The Superior Court Judge was one of the judges who found former Prime Minister Datuk Seri Najib Razak guilty of embezzling funds.

Some believe that the MACC could be attempting to “intimidate” other judges who are also handling high-profile cases.

Us from Malacca Bar at the #W4JI today. Although we were prevented from walking to the Parliament, the Memorandum was nevertheless successfully handed over to YB Mas Ermieyati who accepted it on behalf of the PM. Met up w Perlis, Penang, Ipoh, Selangor, KL, N9 & Johor members! pic.twitter.com/wq0opO9EDD

During the protest, the police formed a blockade that prevented the lawyers from walking towards the Parliament building.

The negotiations broke down after the police insisted that only 20 lawyers would be allowed near the Parliament to hand over the letter. The protest ended peacefully after Deputy Law Minister Mas Ermieyati Samsudin arrived at the gathering to receive the letter, and agreed to deliver it to Prime Minister Ismail Sabri Yaakob and Law Minister Wan Junaidi Tuanku Jaafar.

A day after the protest, the police said they were investigating the organizers of the protest for possible violations of the Peaceful Assembly Act 2012 and the Prevention and Control of Infectious Diseases (Measures within Infected Local Areas) (National Recovery Plan) (Transition Phase to Endemic) Regulations 2022.

On June 24, leaders of the Malaysian Bar Council were summoned by the police but they refused to give any statement pending the issuance of a First Information Report by authorities. The group also decried the police probe:

What was intended to be a walk for judicial independence and upholding the doctrine of separation of powers, ended up becoming an unwarranted and inexplicable display of state power and intimidation by the (police).

The actions of the police have set a bad example for the citizenry, as it conveys the message that citizens are not free to exercise their constitutional rights even when they comply with the law, and that a law enforcement agency can and will act with impunity and unlawfully, just because they are in a position of power to do so.

Asked by the media about the issue, Prime Minister Datuk Seri Ismail Sabri Yaakob responded without mentioning any agency or official:

There is no need for them (enforcement agencies) to announce who is involved … telling the media about the investigation.

I do not see anything wrong about investigating judges implicated in criminal wrongdoings. We are not saying a crime has been committed, as it is only at the investigation stage.

Civil society group CIVICUS cited the incident as an example of the shrinking civic space in Malaysia:

Watch this video to learn more about the “walk for judicial independence.”