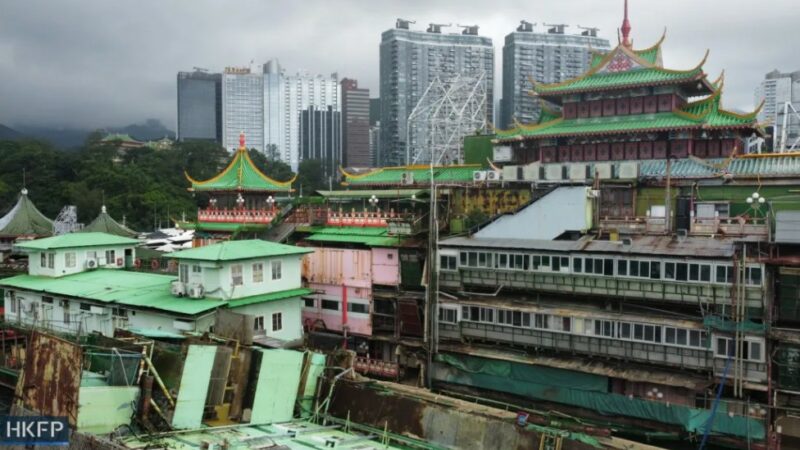 The original version of the report is written by Tom Grundy and published in the Hong Kong Free Press (HKFP) on June 22, 2022. The following edited version is published on Global Voices under a content partnership agreement with HKFP.

Hongkongers have been sharing memes and metaphors, as well as conspiracy theories in reaction to the untimely demise of Hong Kong's iconic Jumbo Floating Restaurant, an eatery positioned on a barge which used to guide diners around the city.

According to a press statement issued on 20 June 2022 by the Jumbo Restaurant's owner, Aberdeen Restaurant Enterprises, as a result of bad weather, the vessel was “completely filled with water” in the South China Sea, when passing the disputed Paracel Islands – also known as the Xisha Islands. No crew members were hurt.

The barge was forced to leave Hong Kong as it could not sustain its restaurant business due to the city's pandemic restrictions. The vessel started sinking when being towed to Cambodia.

The Marine Department requested on June 21 a report into what happened to the iconic seaborne eatery and the owner clarified on June 24 that the barge, though capsized, is still afloat.

Photoshop master SurrealHK was among two artists who appeared to predict Jumbo’s destiny. He shared an image of Jumbo entering its watery grave on June 14.

Self-exiled political cartoonist Ah To (阿塗) posted a picture of the restaurant beneath the waves as early as June 1.

On June 21, SurrealHK posted an updated image of the ill-fated Jumbo flotilla in its heavenly afterlife.

News producer  James Ockenden (@Transit_Jam) posted an image of Jumbo parked at the Chinese military base in the disputed archipelago.

Unrelated news, satellite images show a seafood restaurant has opened up at the Chinese military base in the Xisha Islands. pic.twitter.com/ZXBecZfzI6

Some suggested Jumbo’s fate was a metaphor for Hong Kong’s future, whilst others shared conspiracy theories that the incident was an ill-intentioned bid for a high insurance payout.

Hong Kong-based duo illustrators, “All Things Bright and Beautiful”, shared an image of the sunken vessel with the quote: “[I] can imagine how happy the fish will be.”

The Marine Department had demanded a report from Aberdeen Restaurant Enterprises on the incident and told the press that Jumbo’s owners had hired surveyors to ensure it was sea-worthy, though they had failed to inform the authorities of the accident before news of it was publicised.

“Despite the efforts of the towing company responsible for the trip to rescue the vessel, unfortunately, it capsized on Sunday,” the restaurant’s owner said on Monday night in a statement.

The company added that, since the water depth exceeded 1,000 metres, it would be too difficult to carry out salvage work.

The restaurant’s owners had suffered accumulated deficits of more than HK 100 million (USD 12.7 million) since 2013 whilst various plans to revitalise it in Hong Kong fell through.

When approached by HKFP, the Hong Kong Observatory confirmed that weather conditions had been poor in the region where Jumbo sank over the weekend.

“According to our Marine Forecast over the seas near Paracel Islands on 18 and 19 June, there were moderate to fresh southerly winds, occasionally strong. Isolated showers and thunderstorms. Sea wave up to 3 [metres],” it said on Tuesday.