Both the dictatorship and the government in exile turn to crypto 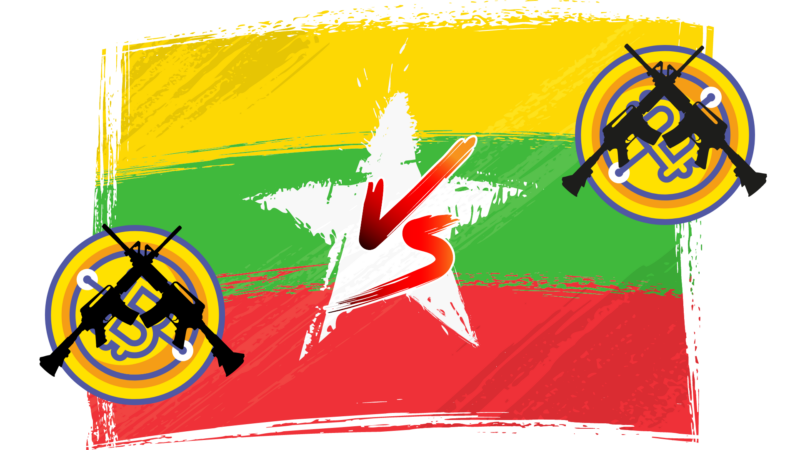 Myanmar’s economy has been crippled after the coup of February 1, 2021. The World Bank estimated that it would shrink 18 percent annually. Consequently, the Myanmar kyat lost 60 percent of its value as of September 2021. This is an all-time low value: the black market value of Myanmar kyats (MMK) to US dollars (USD) was 2200 on September 17, 2021, down from the rate of 1330 before the coup. These facts portray people’s mistrust of the military formed State Administration Council (SAC). Specifically, people’s reliance upon the banking systems and the whole financial mechanism has been diminished. It drives the people of Myanmar into cryptocurrencies as an alternative currency. Both the SAC and the shadow National Unity Government (NUG) acknowledged this requirement with their own mandates: the former to heal the crippled economy with the digital currency and to avoid sanctions imposed, and the latter to separate the existing currency from the state and establish an alternative independent currency to ensure free and secure funding streams. Both parties also announced their cryptocurrency initiatives; it will be interesting to see who wins this battle of crypto dreams.

Last year, an anonymous developer group created a digital currency called MYD which aims to liberate the people from the centralized currency controlled by the junta. The cryptocurrency planned 45 percent of its currency to fund the NUG and the remaining 55 percent to be distributed to citizens. However, because they failed to build a scalable user base and had accessibility issues, MYD ceased operation in December 2021. Right after that, the NUG announced Tether (USDT), a stable cryptocurrency whose value is pegged to the dollar, to officially replace the Myanmar kyat. The NUG’s minister of planning, finance and investment, U Tin Tun Naing said, “When the time is right and if it’s needed for our revolution, we will definitely expand the list of our approved cryptocurrencies.” The anti-junta group’s hope and eagerness to empower cryptocurrency is significant, and plays out in these initiatives.

However, NUG’s choice of cryptocurrency has some questionable aspects. The NUG government’s reasons for choosing Tether were to prevent the tracing of transactions, to create better and faster transactions, and to attain financial stability. Tether is the third largest cryptocurrency with a market cap of USD 76 billion, and it can be transferred like Bitcoin, in transactions that are hard for governments to trace.

However, in terms of financial stability, in June 2021, US Federal Reserve President Eric Rosengren warned that Tether could be a threat to financial stability. Bernhard Muller, a crypto trader, DeFi (Decentralized Finance) auditor and security analyst also wrote that Tether could become a black swan of cryptocurrency, and that its stability could dramatically collapse. It remains to be seen whether the shadow government’s crypto dream will be dependent on Tether.

All forms of cryptocurrency were banned in Myanmar long before the coup. In 2020, the Central Bank of Myanmar (CBM) declared a ban of cryptocurrencies referring to Bitcoin (BTC), Litecoin (LTC), Ethereum (ETH) and Perfect Money (PM), and all traders would be punishable by the monetary laws. Again, in January 2022, as a response to the NUG government’s declaration of Tether as official currency in December 2021, the SAC drafted a cybersecurity law that  criminalized using VPNs and cryptocurrency. The irony of the military’s move is that, right after the ban of cryptocurrency, in February 2022, they declared that they are developing a digital currency.

Maj General Zaw Min Tun, who is the spokesperson of the military's SAC, said that, “A digital currency will help improve financial activities in Myanmar.” The SAC is struggling to resurrect the badly shrunken economy with the help of digital currency. Central banks of various countries are pursuing the dream of Central Bank Digital Currency (CBDC) such as China’s Digital Yuan project, to lift up economies stricken by the pandemic. Nevertheless, the World Bank’s senior economist for Myanmar, Kim Edwards, said, “We think the country is not in the best position to be able to pursue something like this,” at a conference.

On the other hand, the military has been surveilling and arresting anti-junta groups by tracking phone numbers from Wave Money, K Pay, CB Pay, etc. The other possibility of the junta’s objective of a digital currency might be the dream of a centralized manipulation of the transaction data of the people in one place so that they could monitor and control citizens more seamlessly.

Crypto’s role in resistance and repression

The grand discourse of the crypto movement itself leads towards the separation of currency from the state. It is evident that, since the beginning, with Satoshi’s whitepaper, the narrative around cryptocurrency is all about resisting the power of the state. Venezuela’s crypto revolution has been portrayed as a great example of both resistance and repression.

Venezuela is one of the most rapid adopters of cryptocurrency in the world. The bolivar has lost over 200000 percent of its value against the US dollar since 2013, creating the most extreme hyperinflation in the world. US sanctions and a skyrocketing unemployment rate are adding more fuel to the hyperinflation flame. In order to get out of the situation, Venezuelans turned to cryptocurrencies that they can freely use anywhere in the world without any regulation by the government. The case of Valiu, a blockchain based remittance platform, would be one of the great examples of resistance here. The diaspora communities of Venezuelans can transfer remittances to their families inside the country, they can buy food and other necessities with Valiu and they can buy cryptocurrencies with pesos. However, the great initiative announced their closure in December 2021 due to the risks of Venezuela’s situation.

On the side of repression, the Venezuelan government is trying to centralize the crypto movement by creating Petro, a national digital currency. Venezuela is just one of the many states that have their eye on cryptocurrencies or blockchain based digital currencies as a tool of centralization and surveillance. For example, China has also been urging the establishment of a national digital currency, Digital Yuan, which China’s The People’s Bank of China (PBOC) called “sovereign currency” since 2014. The Washington Post claimed that the Chinese Communist Party (CCP) wants to surveil its people more closely by establishing a more centralized digital currency. Digital Yuan only allows “controlled anonymity,” which means the personally identifiable information of citizens will be defined and controlled by the state to a large extent. The currency is going to perform as one of the toolkits of China’s “Social Credit System,” which is one of  the most privacy intrusive digital public administration tools in the world.

Venezuela’s crypto revolution has similar political and economic contexts with Myanmar right now. However, in Myanmar, strategies for crypto dreams on both sides largely emphasize legislative activities rather than development of the crypto economy. In the case of Venezuela, the development of the crypto economy derived from social digital innovations, a deep understanding of value creation and distribution, and the ability to reach out to grassroots communities, rather than legislation. Myanmar’s crypto revolution is at the beginning of the tug of war between repression and resistance. It will play a critical role in Myanmar’s political revolution: whether the country will be able to restore democracy or be drowned into authoritarianism.