In a post-COVID workplace, is a ‘professional’ dress code still relevant?

Traditional professional attire can be exclusionary to marginalized groups 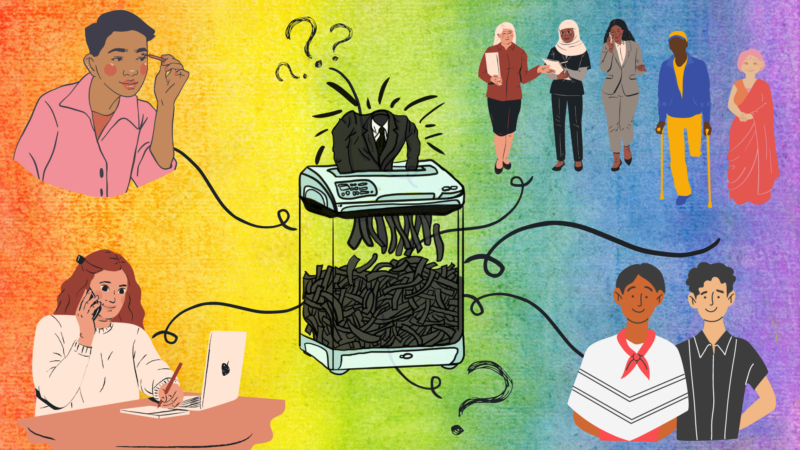 The author would like to acknowledge the contribution of Megan Smith, Thalia Trinidad, and Rigoberto Melgar-Melgar in the conceptualization and production of this piece.

In the two years since the COVID-19 pandemic hit, most people have been in front of screens. The en masse shift to work from home resulted in a change in fashion trends — a newfound affection for sweatpants, for example. The Western professional dress-code standards prohibiting blue jeans, gym shorts, and T-shirts have either been relaxed or disappeared altogether. For example, the sales for Gap’s Athleta unit, which sells tights, jogging pants, sweats, and workout tops rose 6 percent compared with a 52 percent fall at the Banana Republic, which sells dressier attire.

According to a Society for Human Resource Management poll, during the first two years of remote-working, 17 percent wore pajamas as their typical daily work attire. The pandemic has put an unrecognized strain on formal wear outlets, for instance, the iconic Brooks Brothers filed for bankruptcy in 2020. Indeed, the COVID-19 pandemic has radically refashioned workplace dress codes, making an item known as a “Zoom shirt” — a clean shirt or blouse that’s kept on the back of your desk chair to quickly be presentable for video conferences — the only absolute necessity.

In the “new normal” workplace, will women's power suits and men's corporate uniforms become irrelevant? While some fashion experts expect the desire for comfortable clothing will outlive the pandemic, some human resource professionals like Riia O’Donnell express concern that the work-from-home grooming and attire of many employees “scream unprofessional.” Similarly, Megan Serullo, a business reporter for CBS Interactive, noted that “most work-from-home attire is hardly acceptable out-of-doors, let alone in any kind of professional environment.” With organizations pushing for employees to return to the physical workplace, are workplace dress codes set to change or will these “professional” structures be thrown out the window altogether?

Are modern dress codes “professional” or just a pathway for ableism?

After over two years of remote work, some employers are slowly talking about returning to the office, and as such, dress-down days may be coming to an end. The transition to the physical workspace could signal a return to the professional dress code and with that, the return to gendered norms and assumptions around appearance and professionalism. Robyn Hopper, an adviser for the Society of Human Resources Management (SHRM), said that employers have been reminding employees “not to come into the office in yoga pants and flip-flops.” Similarly, Allen Smith of SHRM writes that “the modified dress code — like the regular dress code when individuals return to the workplace — should be enforced consistently and should provide guidelines that maintain professionalism.” This sentiment toward returning to professional attire can, however, create countless barriers for persons with disabilities (PWDs).

In 2006, the United Nations adopted the Convention on the Rights of Persons with Disabilities (CRPD), a major catalyst in the global disability rights movement. Yet little progress has been made in employment: The employment rate for people with disabilities is 34.6 percent compared to 77.6 percent for non-disabled people. The role of employment discrimination in these statistics is important, but clothing discrimination is also a factor.

Researchers from the University of Missouri recently found that workplace participation for PWDs can be exacerbated by the lack of adaptive professional clothing in the marketplace. Lucy Richardson, Child Protection Specialist and the Disability Inclusion Unit of the UNICEF said:

Professional clothes do not take into account wheelchair users who are seated throughout their workday. It is especially difficult to find skirts or dresses that are long enough once seated and jackets that don't bunch up and become uncomfortable.

Lack of adaptive clothing together with strict dress code rules, hinder the employment opportunities for PWDs. According to a study by the University of Missouri-Columbia, PWDs don't apply for jobs because they don't believe they can meet the expectations of the office dress code. When policies on transitioning to the pre-pandemic dress code are implemented without due diligence, they can unintentionally discriminate against PWDs and prevent them from having equal access to employment in the open labor market.

The renewed expectations around standard professional dress codes reflect the return to pre-COVID lack of creative thinking around the multiple ways we all can engage in work. In our impulse to “get back to normal,” we are disregarding the often more inclusive and more productive ways we have worked in the last two years. The reasonable accommodations such as teleworking, which people with disabilities have consistently requested for decades, were all of a sudden possible and used en masse during COVID-19, and were recognized to be largely beneficial for the entire workplace. To try and return to the standardized and restrictive workplace culture — including formulaic dress codes — does a great disservice to the creative progress made from working in an environment of uncertainty.

According to a report from the Return On Disability Group, although 90 percent of companies claim to prioritize diversity, only 4 percent consider disability in those initiatives. The return to pre-pandemic professional attire rules increases stigma and decreases the self-efficacy of PWDs.

Therefore, employers should not reinstate pre-pandemic dress code policies that force PWDs to conform to an ableist definition of professionalism. By having a more relaxed dress code and incorporating disability etiquette in the workplace, employers can make it more inclusive and equitable for PWDs, thereby enabling them to do their jobs effectively, safely, and comfortably. In the era of the new normal, employers should remember to be inclusive of PWDs,  and involve them as equal partners in the decision-making process governing diversity, equity, and inclusion (DEI) initiatives, including disability-friendly policies, keeping in mind that disability isn’t a singular experience. Currently, one billion people, or 15 percent of the world's population, of all races, genders, sexual orientations, nationalities, religions, incomes, and social classes, have disabilities.

PWDs aren't the only group to suffer from strict dress codes. In the United States, LGBTQ+ individuals experience disproportionately higher rates of poverty compared to their non-LGBTQ+ counterparts, even prior to the COVID-19 pandemic. These inequities were compounded by the effects of the coronavirus pandemic with nearly two-thirds of LGBTQ+ households facing job or wage disruption. The National LGBTQ+ Taskforce reports that transgender workers report unemployment at twice the rate of the population as a whole.  Non-binary workers are often subject to significant rates of discrimination in the workplace with almost a third experiencing discrimination in the hiring process alone. Employed  LGBTQ+ people of color, transgender women and men, and non-binary individuals earn less compared to hetero, gender normative workers, according to Human Rights Watch report.

In the workplace, gender-binary expectations cause LGBTQ+ people to experience feelings of insecurity, distress, anxiety, and self-doubt. Human Right Campaign reports that one in five LGBTQ+ workers has been told or had coworkers imply that they should dress more feminine or masculine aligning to “traditional” gender norms. LGBTQ+ people are experiencing a loss of belonging in the workplace as a result. Flexible dress codes can create a work environment that celebrates LGBTQ+ people, allowing space for workers to show up authentically with their unique identities, interests, and styles. As employers revise their workplace policies, written dress code policies should be made gender-neutral. After a complaint was filed against Alaska Airlines by the American Civil Liberties Union (ACLU) in May 2021, the airline announced in late March of 2022 that it had updated its dress code policies to make them more gender-neutral and inclusive.

Cara Levine-Brenner, a psychology instructor at the State University of New York at Dutchess said:

As a gender-nonconforming academic, I have been struggling with what constitutes professional attire all my career. Wearing a button-down top and slacks is not a neutral look for female faculty. But my students, who have even less power in the workplace, experience far more tangible consequences. Many wait tables and are encouraged to appear as cis-gendered as possible. Uniform options are limited to high-cut skirts and shorts for those presenting as women, while workers presenting as cis-men can wear Bermuda shorts or pants. The discomfort and vulnerability, as well as the expectations for additional grooming, unfairly disadvantage those who identify — or are identified — as women.

The pandemic disrupted the lives of many; however, it also gave organizations an opportunity to reevaluate what they are and where they want to go. Organizations must seize this moment to transform ambiguity into opportunity by embracing gender-fluid clothing options. A gender-neutral dress code would allow employers to create a fair and equitable workplace and offer a safer and more inclusive work environment, where everyone can bring their best and most authentic selves to work.

The return to work brings to light inequities regarding visibility at work and how it relates to power and influence — a factor that directly impacts underrepresented groups in the workforce. To center the work at the intersection of gender, sexual orientation, ableism, and implicit bias, organizations must take intentional measures to eradicate practices and norms that inadvertently discriminate based on appearance and promulgate a deeply entrenched culture of white supremacy if they truly want to live up the DEI principles. Adoption of a more gender-neutral, less restrictive, and diverse dress code style will open the doors of opportunity for employees coming from underrepresented groups.