Saudi's box office is the largest in the Arab world 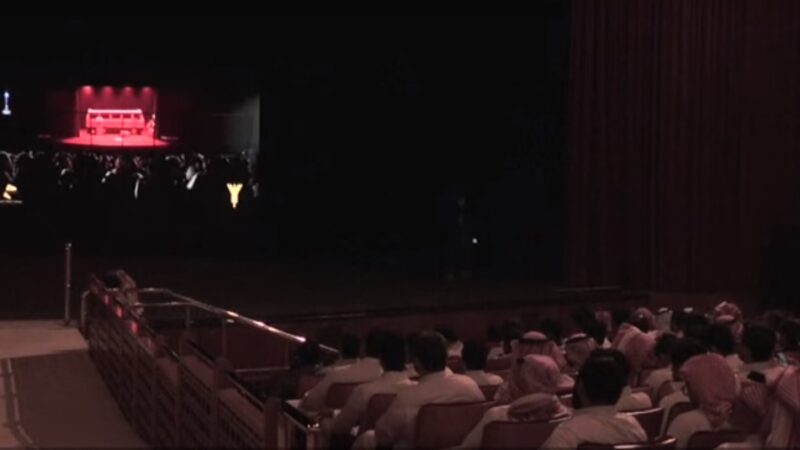 It's been four years since Saudis were finally allowed to enjoy a movie in a theatre. Since then, local productions have failed to win over a national audience, while international films are subjected to censurers’ whims. Image is a screenshot from this video.

Four years after Saudi Arabian authorities revoked a decades-long decision of banning cinema and, to the thrill of cinema-lovers in the kingdom, gave permission for commercial movie theaters to open, the Saudi box office is now the biggest in the Arab world, and the kingdom's decisions to ban movies is said to resonate across other Arab countries.

Raseef22, an independent media portal, cited statistics of the Film Authority of the Saudi Ministry of Culture as saying that, as of April 2022 (after 4 years of movie screenings), the number of cinemas in Saudi Arabia reached 56, comprising 518 screens in 20 cities, in which 1,144 films were shown.

Raseef22’s official figures stated the Saudi box office accumulated $238 million last year in sales despite restrictions on movie theatres’ capacities that are made as a result of the pandemic, outperforming the more mature UAE box office, which achieved only $122 million in the same year, due to the Corona-driven reductions in theaters capacity which lasted until February 2022. Movie ticket sales in Saudi amounted to 30.9 million tickets, making it the largest Arab cinema market.

And although Saudi filmmakers have not yet succeeded in releasing local productions of mass success, they are still being invited in international festivals to screen their work.

Furthermore, in a show of cultural openness and tolerance, the Saudi's first ever European Film Festival took off on June 15, where 14 movies from across the continent were screened before a keen audience.

I love & happy seeing film industry progressing. Events as this used to take place in embassies only. Showing this type of movies will create awareness for Saudis of issues with which they are not familiar and give experience to #SaudiFilmIndustry #Cinemahttps://t.co/GgiNWHnUWb

Yet, in tandem with this event which was announced with much fanfare was a more hushed discussion on Twitter about the banning of yet another international movie from movie theatres: Disney's Buzz Lightyear. While many welcomed the ban, others questioned censurers’ judgments.

Lightyear has become the latest film from The Walt Disney Studios to be rejected in Saudi Arabia, UAE and Kuwait over LGBTQ+ content. 4th after West Side Story, Eternals and Dr Strange 2. https://t.co/ftDC5hzA4o

Earlier this year, Saudis took to Twitter to discuss the banning of the widely-popular Dr Strange 2, which authorities said was carried out because of LGBTQ references.

If there is a good thing to be mentioned about the opening of movie theatres in Saudi, it is to send messages to the whole world about actions that go against human nature, by banning the screening of films that defy [human] nature and public taste.

Meanwhile, another user posted at the time:

#Banning_DrStrange_In_Saudi If this is true, then just don't open cinemas to start with if you'll be banning any movie you don't like

ion even like marvel but why the hell are they banning movies with gay characters but allowing movies where the lead actress is a proud zionist knowing damn well all the proceeds will go to i**ael hmm?? #منع_دكتور_سترينج_في_السعودية

A staunch Marvel fan wrote on Twitter at the time:

As a fan of marvel I’ve waiting for the movie for almost a year then I won’t see the movie just for 10 sec !!!
And I’m not talking about religion because In Spider-Man no Way home they literally kissed where were they then
#منع_دكتور_سترينج_في_السعودية

Yet, others felt Disney should have given in to Saudi's request for the debated 12-second scene to be cut out. One such voice said:

So many peoplehave been waiting since 2019 !!! 3years! And now disney is being a b¡tch ! #منع_دكتور_سترينج_في_السعودية