Bosnian research shows that LGBTQ+ people usually come out during their time at university. 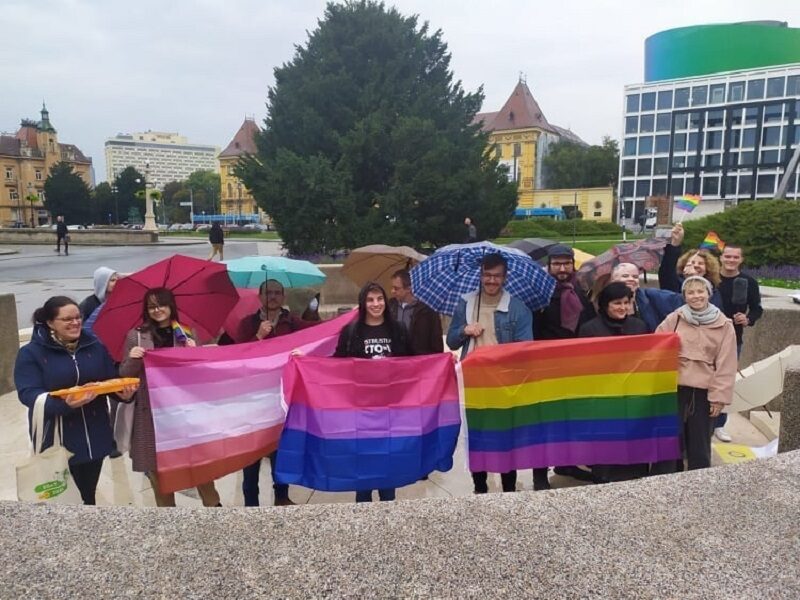 This article by Anja Zulić was originally published on Balkan Diskurs, a project of the Post-Conflict Research Center (PCRC). An edited version has been republished by Global Voices under a content-sharing agreement.

The Croatian LGBTQ+ association ZA-Pravo, which was founded two years ago at the University of Zagreb Law Faculty, provides a positive example for neighboring countries like Bosnia and Herzegovina (BIH), where no such organizations have been registered. This association fights against discrimination and works to promote the visibility of queer people in the university environment.

For students in ZA-Pravo, conservatism within the faculty is the main reason for their activism. In fact, their exclusion from the academic community could be said to have motivated the founding of the association. In a statement for Balkan Diskurs, ZA-Pravo explained:

“As expected, some people opposed the idea. We have faced various obstacles regarding the registration and starting of the association, but we can proudly say that we haven’t given up. When there are loud voices from one side and when those voices actively lead to the endangerment of someone’s rights, acts of intolerance, or inappropriate comments – it is important to oppose them.”

Emina Bošnjak, executive director of the Sarajevo Open Center (SOC), pointed out that there is no student LGBTQ+ organization in any of the faculties across BiH. However, she'd received information on attempts to form such an organization at the public university in Tuzla. 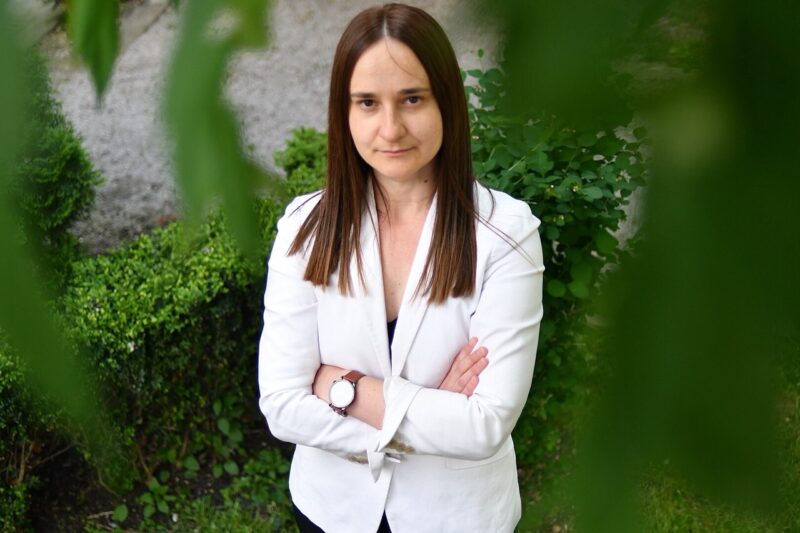 “If I had to predict where it might happen first, I would guess that it would be in one of the philosophy faculties. Maybe in Tuzla, probably in Sarajevo,” Bošnjak added.

When it comes to the situation at certain faculties in BiH and the position of LGBTQ+ students, Bošnjak highlights information she has received from people who contact the SOC, come to the events that they organize, or participate in their work. She said:

“I don’t think I would be making a big mistake to say that those faculties where misogyny reigns and where cases of sexual harassment and violence against female students have been reported are far from receptive to issues of diversity in the context of sexual orientation and gender identity. These are still not places that will encourage LGBT + people to come out during their studies, nor will they provide effective protection in cases of violence and discrimination and clearly condemn homo / bi / transphobia.”

The concept of a gay–straight alliance

ZA-Pravo was founded on November 16, 2020, on the International Day of Tolerance, with the encouragement of Antonija Petričušić, a professor at the Department of Sociology at the Zagreb Faculty of Law. The Association was established in line with the concept of gay–straight alliances at colleges in the United States. 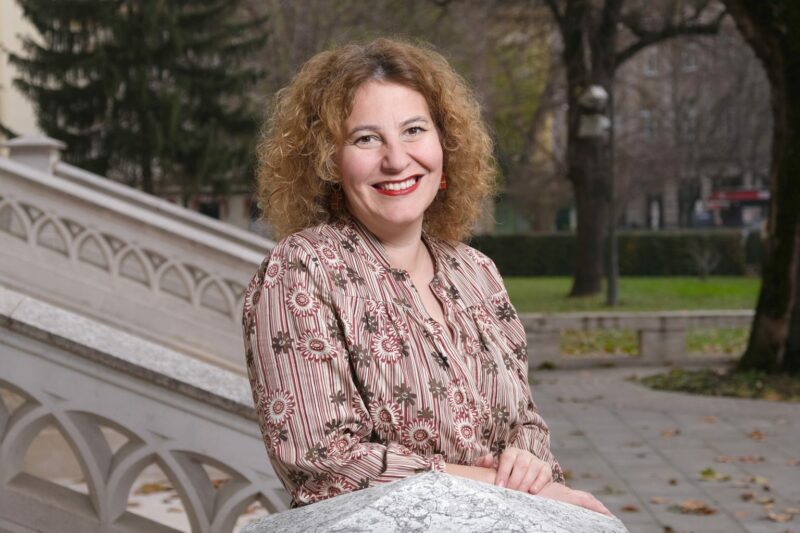 Antonija Petričušić, professor at the Department of Sociology, Faculty of Law in Zagreb. Photo: private archive, used with permission.

“What thrilled me was that gay and straight students came forward praising the idea and saying that this should have existed a long time ago. They didn’t know who was behind the idea, which means that they really believed in the idea. After just one month, we organized the founding assembly,” Petričušić recalls.

Today, the association has about 100 members, most of which are students. Professor Petričušić was the chair of the board of directors for the first year, after which she retired and left the leadership to the students. All decisions and activities are a matter of consensus.

Throughout history, student activism has brought about great social changes. Today, according to ZA-Pravo, LGBTQ+ activism is very important due to the massive rise in recent years of the far-right, which aims to destroy LGBTQ+ rights by spreading disinformation and moral panic.

ZA-Pravo are optimistic about future generations, because they believe that young people are increasingly inclined towards activism. The only organization for LGBTQ+ activism within the institution has the following accomplishments:

“So far, we have organized a scientific conference entitled ‘Development and Challenges of Protecting LGBTIQ+ Rights,’ which we held on Human Rights Day.  Then there was the public debate ‘Are we tolerant?’ which was attended by Alan Bowman, the Canadian ambassador to Croatia, Boris Milošević, the Vice President for Human Rights and Social Affairs, and Vice Dean of the Faculty of Law, Mario Krešić. However, our greatest pride is the peer-to-peer support group for LGBTIQ+ students called ‘Qrug.’”

ZA-Pravo promotes cooperation with other universities, from giving a lecture at the Law Faculty in Rijeka in May, to collaborating with the universities of Cork and Rotterdam in the European University of Post-Industrial Cities (UNIC) institutional design project to organize the Rainbow Walkway to symbolically celebrate International Coming Out Day.

The existence of an association such as ZA-Pravo at the Faculty of Law is important because the formal education curriculum doesn't cover topics such as activism, citizen participation, and engagement in associations. ZA-Pravo's work shows students that they are supported in areas not mentioned by their official courses.  Professor Petričušić said:

“At the faculties, we can support students by reacting to the first instances of discrimination and condemning such acts. Talking about social issues and problems in a specific way so as not to insult anyone gives the LGBT+ student population a sense of belonging. It’s much easier for me to open such topics because of the subject I teach, but you can also encourage students with, for example, a pin or a bag in rainbow colors, etc.”

Coming out usually happens in college

According to SOC research from 2020, LGBTQ+ people usually come out during their time at university, especially individuals who come from smaller communities. Forty-nine percent come out to a small circle of people, while just a quarter speak openly about it.

“It’s clear that direct short-term measures at universities should be aimed at creating a safe space for LGBT+ students, which will depend not only on the individual courage and solidarity of LGBT+ people but also on openness, work, and communication of the administration, professors, and supporters.”

As is the case in other countries in the region, in Bosnia and Herzegovina, the activities of the initiative “I Didn’t Ask for It” [Nisam Tražila]  brought to light numerous cases of sexual violence and harassment that occur in academic institutions. According to Bošnjak, mitigation measures by universities opened the door for the them to deal with violence and discrimination against LGBTQ+ people too, first by acknowledging the existence of such violence and discrimination, and then by prevention.

The Sarajevo Open Center has cooperated with universities, as well as with the Sarajevo Academy of Performing Arts, on mechanisms to prevent sexual harassment.

Bošnak opined that “organizing organic associations of LGBT+ students and faculty supporters would then be the right answer” for issues these students face, enabling adequate and timely anti-discrimination measures for the administration, professors, and other students.

In the less than two years of its existence, ZA-Pravo has gained the attention not only of LGBTQ+ people but also of the general public. People have heard that law students and professors have come together to change a discriminatory culture and promote tolerance.  They have managed to create a safe place where LGBTQ+ students are accepted.

“I think that the existence of the association changes the climate in the Law Faculty and normalizes diversity, and it has been recognized by the administration because they invited us to coordinate certain projects. We cannot be ignored. Students are told about the existence of the association Za-Pravo on the orientation day. Erasmus students were made aware of it as well,” said Professor Petričušić.

At the end of the conversation, she emphasized that if they manage to empower just one LGBTQ+ person through the existence and work of ZA-Pravo, their mission is a success.