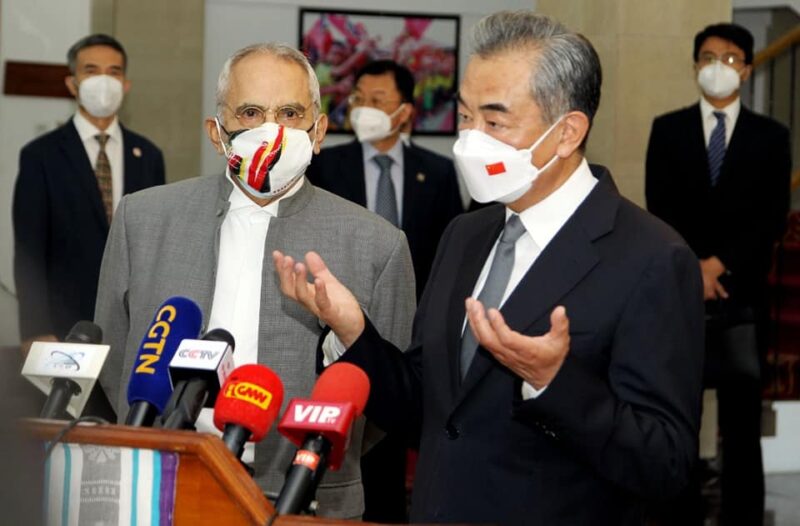 Local journalists challenged restrictions and asserted their right to question China’s State Councilor and Foreign Minister Wang Yi at a press briefing held during Wang's visit to Timor-Leste on June 4.

Timor-Leste was the last stop for Wang, whose 10-day Pacific tour took him to the Solomon Islands, Kiribati, Samoa, Fiji, Tonga, Vanuatu, and Papua New Guinea. He signed various agreements signifying China’s intention to deepen its cooperation with Pacific nations. Before the tour, a leaked document had revealed China’s plan to form a security pact in the Pacific region which drew intense reactions from countries such as Australia and the United States. China has denied that it is interested in building military facilities in the Pacific and accused its rivals of making false claims.

Wang ended his tour without signing any security deal, although his visit became a major political event, aside from boosting China’s diplomatic initiatives in the region.

In Timor-Leste, Wang signed agreements on agriculture, media partnerships and economic and technical cooperation. China also agreed to send medical teams to Timor-Leste but failed to convince the Timorese government to sign a security partnership. An excerpt from a statement released by China’s government highlighted Wang itinerary in Timor-Leste:

After the meeting, Wang Yi, accompanied by [President] Ramos-Horta, met the press and answered impromptu questions.

But the “impromptu questions” only happened because local journalists challenged their government to remove news coverage restrictions that had been imposed ahead of Wang's visit.

A few days before the arrival of Wang Yi, local journalists were told that they would not be allowed to ask questions during the press briefing, a move protested by local media groups.

Timor journalists protest government’s agreemt to #Chinese demands no questions be allowed of Foreign Minister when he visits #TimorLeste this week.
“No statements will be allowed to the media, or interviews.” It was the Chinese delegation that demanded this,” TL Foreign Ministry pic.twitter.com/uuwNv4xuS1

In other Pacific nations visited earlier by Wang, local journalists were prevented from questioning the Chinese official. In the Solomon Islands, the local media group called for a boycott of the visit. No press event was held in Kiribati, Samoa, or Fiji. Regional and global media watchdogs have assailed Chinese authorities and Pacific governments for blocking the efforts of journalists to seek more information during Wang Yi’s historic visit in the region.

Writing for the Asia-Pacific Report, David Robie pointed out the significance of what Timor-Leste journalists achieved:

Timor-Leste, the youngest independent nation and the most fledgling press in the Asia-Pacific, has finally shown how it’s done — with a big lesson for Pacific island neighbours.

Tackle the Chinese media gatekeepers and creeping authoritarianism threatening journalism in the region at the top.