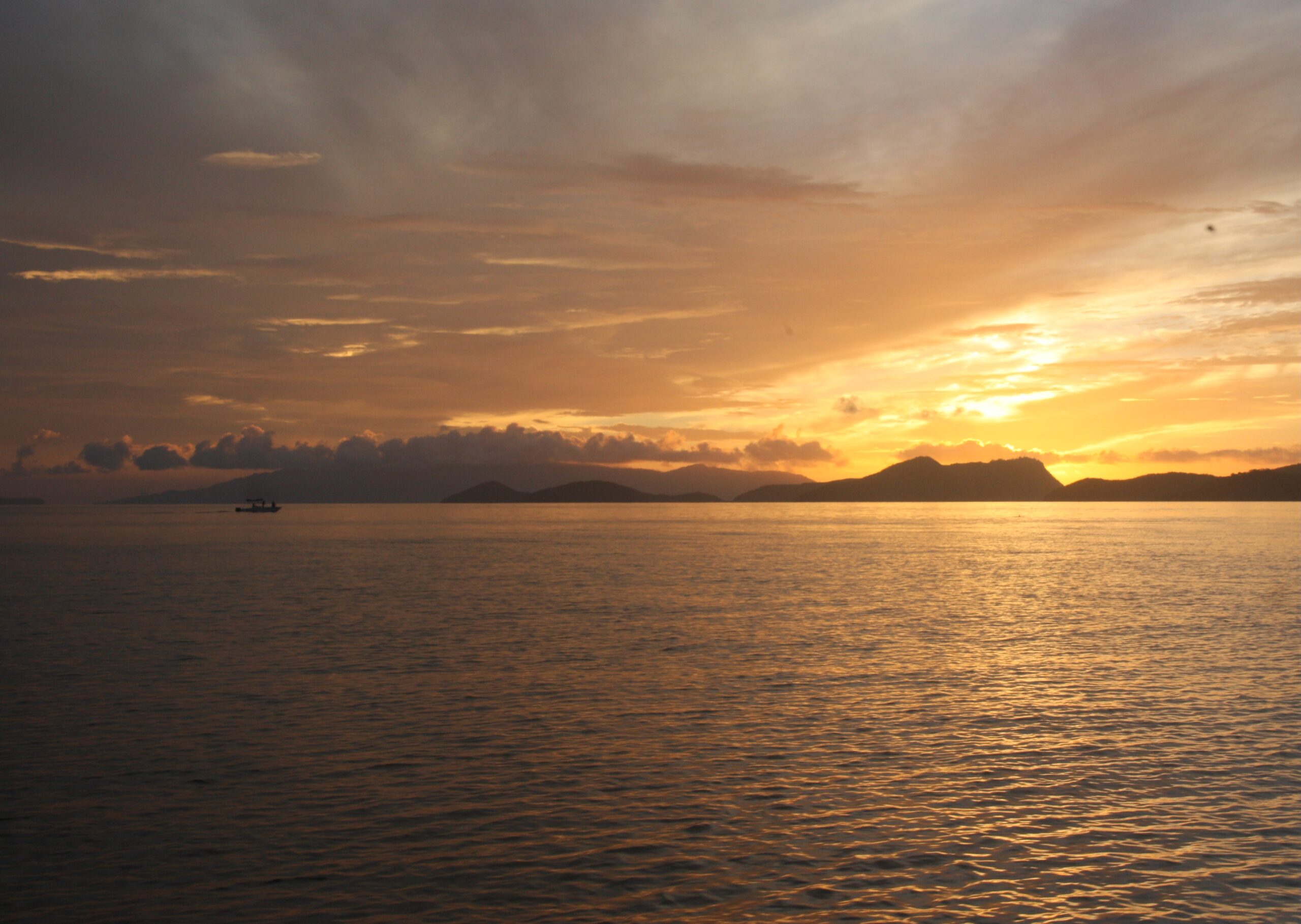 Sunset over the Caribbean Sea, ‘Down de Islands,’ Trinidad. Photo by Janine Mendes-Franco, used with permission.

World Oceans Day, officially designated by the United Nations (UN) in 2008 and celebrated annually on June 8, seeks to raise global awareness of oceans’ importance to both marine and human life, thereby striving to better protect them within the framework of the UN's Sustainable Development Goals (SDGs).

Goal Number 14 focuses on the conservation and sustainable use of our oceans, seas and marine resources, since they “[drive] global systems that make the Earth habitable for humankind”:

Our rainwater, drinking water, weather, climate, coastlines, much of our food, and even the oxygen in the air we breathe, are all ultimately provided and regulated by the sea.

This vital SDG reflects the fact that the majority of the earth consists of water; humans wouldn't be able to survive without it. This is especially true for Small Island Developing States (SIDS) like the Caribbean which are, more often that not, the first to be affected by climate change impacts such as rising sea levels, a fiercer annual Atlantic hurricane season, coral bleaching, coastal water pollution, overfishing, and the heating up of seawater which has caused an overabundance of sargassum. Such ecological imbalances are also adversely affecting Caribbean fisheries, while some regional governments’ sacrificing of fragile coastline ecosystems for economic gain exacerbates the problem.

Regional environmental activists and leaders know exactly what the challenges are, but perhaps on this year's World Oceans Day, where the goal is revitalisation of our oceans, we need to be reminded of their purpose and beauty before we truly understand the importance of the collective action required to successfully defend them.

The oceans surrounding the twin-island republic of Trinidad and Tobago, to the south of the Caribbean archipelago, is a perfect example of all the ways in which the sea is meaningful — and crucial — to our very existence. 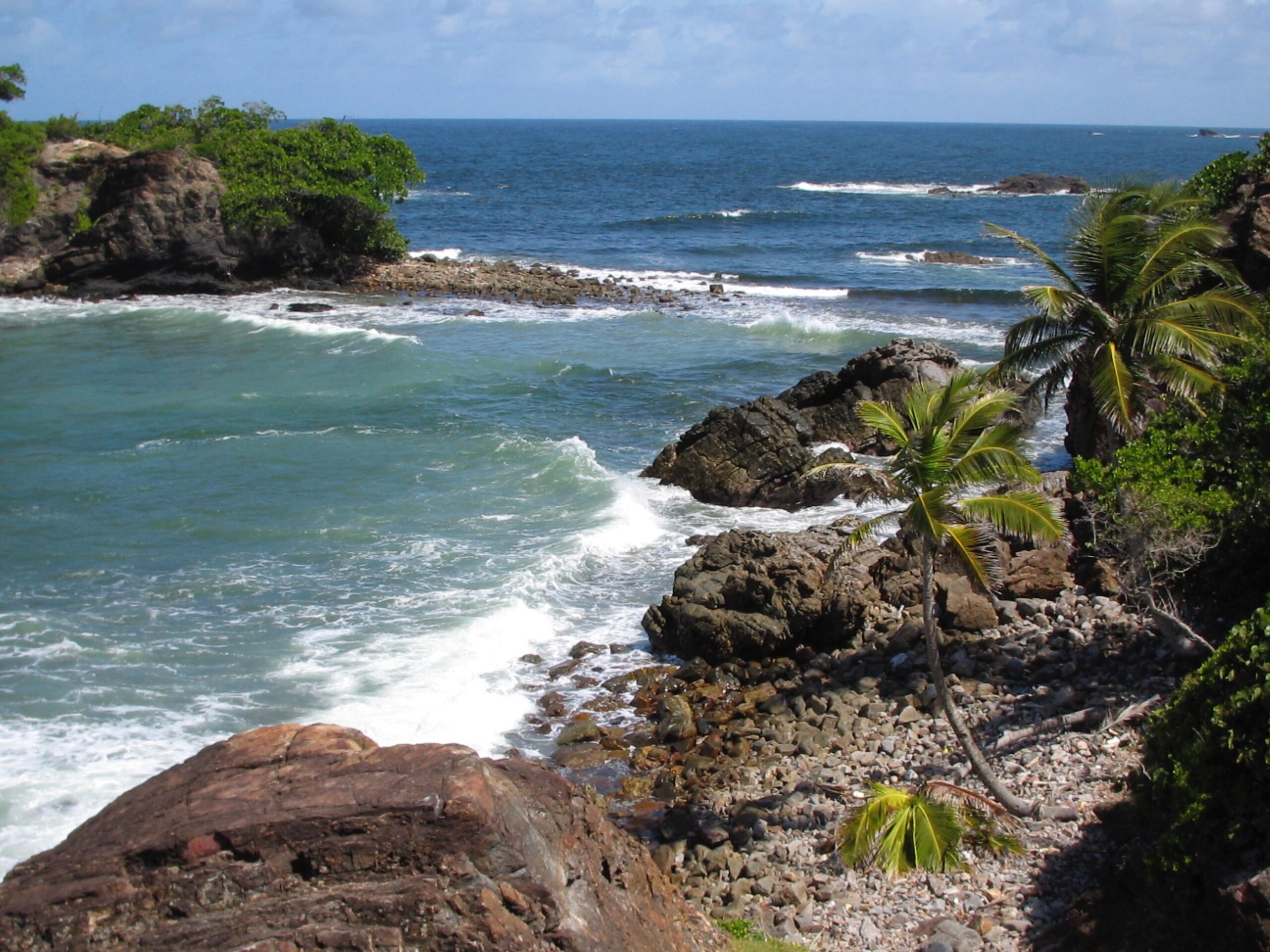 The point, on Trinidad's north-east coast at the site of the Toco Lighthouse, at which the warm waters of the Caribbean Sea meet the deep blues of the Atlantic Ocean, is a poignant reminder that all the world's oceans, like all of humankind, are connected. 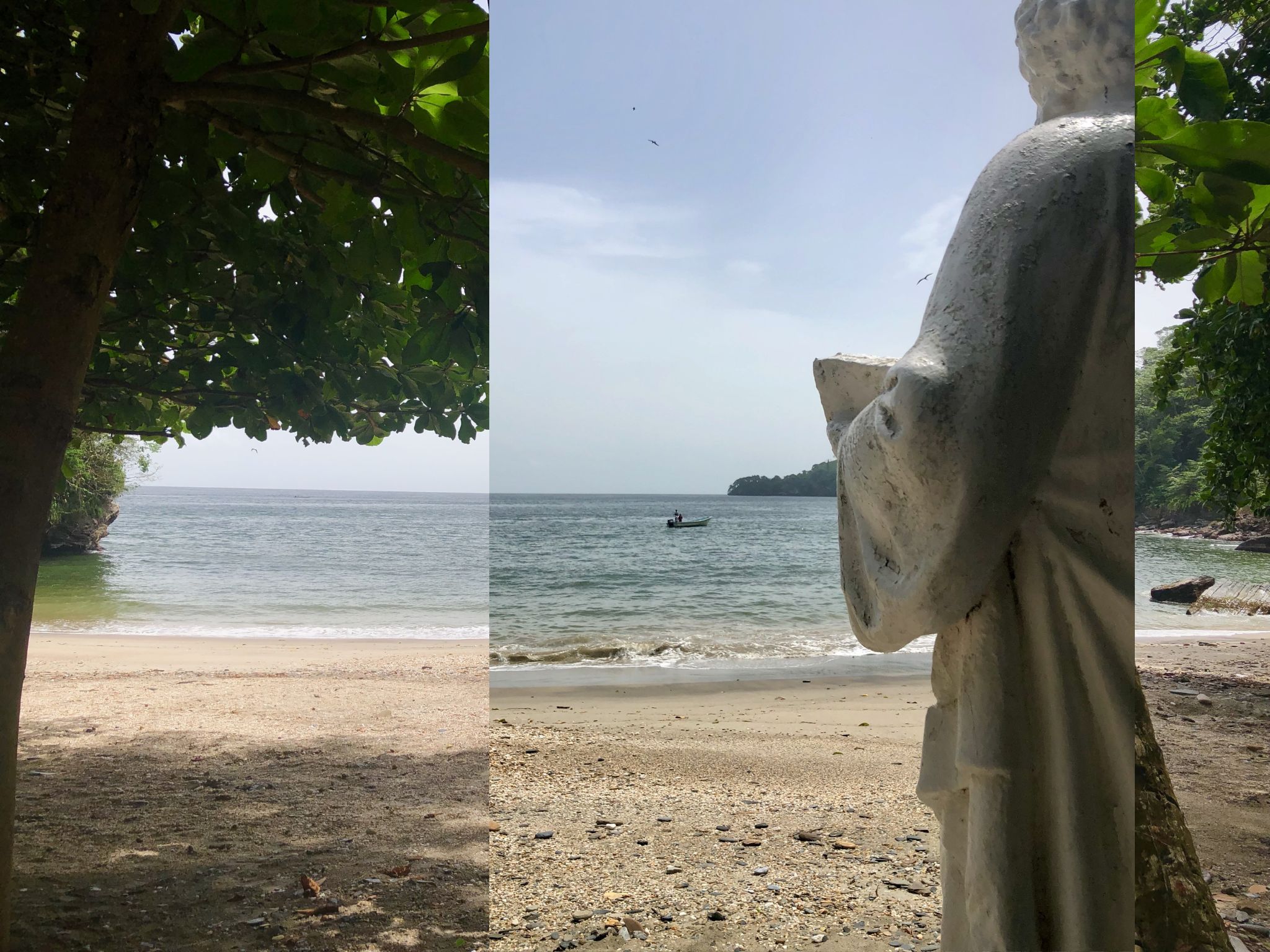 This beach in Paramin, along Trinidad's north coast, is a popular fishing spot. Photos by Janine Mendes-Franco, used with permission.

Trinidad's north coast is a great lure for fishermen. Those who do it for sport often go after tarpon, while those who do it for their livelihoods catch everything from Kingfish to Mahi-Mahi. This particular spot, accessible either by boat or via a steep hillside descending from the village of Paramin, is frequented by fishermen, emphasised by the statue of St. Peter, the patron saint of fisherfolk, which has been erected on the sand. 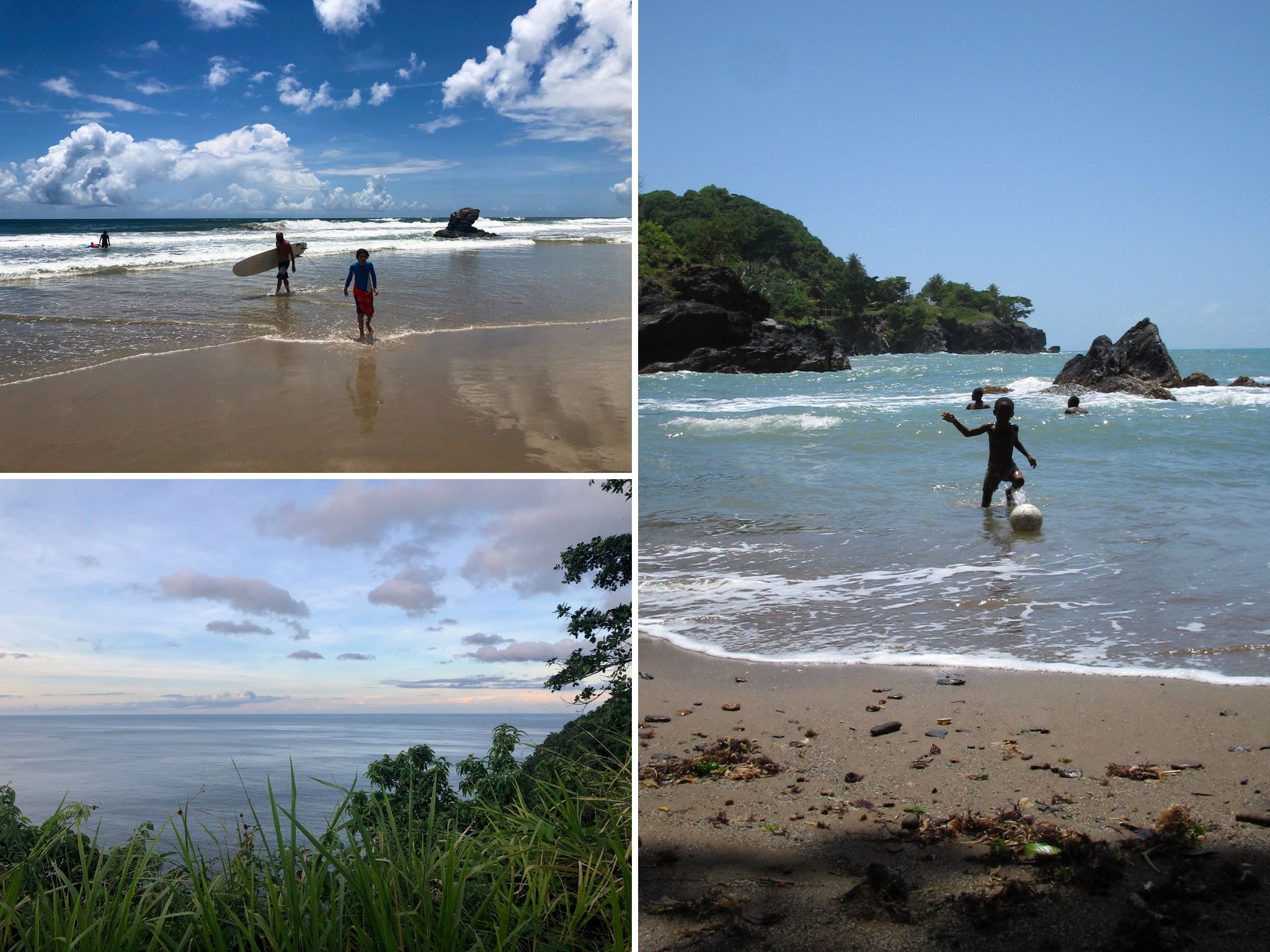 Clockwise, from top left: Damien's Bay in Blanchisseuse; Toco, along Trinidad's north-east coast, and an ocean view from Chaguaramas on the north-west. Photos by Janine Mendes-Franco, used with permission.

Oceans play an integral role in physical and mental health. When Trinidad and Tobago's beaches were closed for months at a time as part of the country's COVID-19 restrictions, there were many petitions asking that they be reopened so that surfers could get in some exercise, residents who live in oceanside villages (like Toco, on the north-east coast) could get their children outdoors, and hikers (like the ones who religiously climb the Tracking Station trail in Chaguaramas on the north-west of the island) could connect with nature, which has been proven to be a source of relaxation and revitalisation. 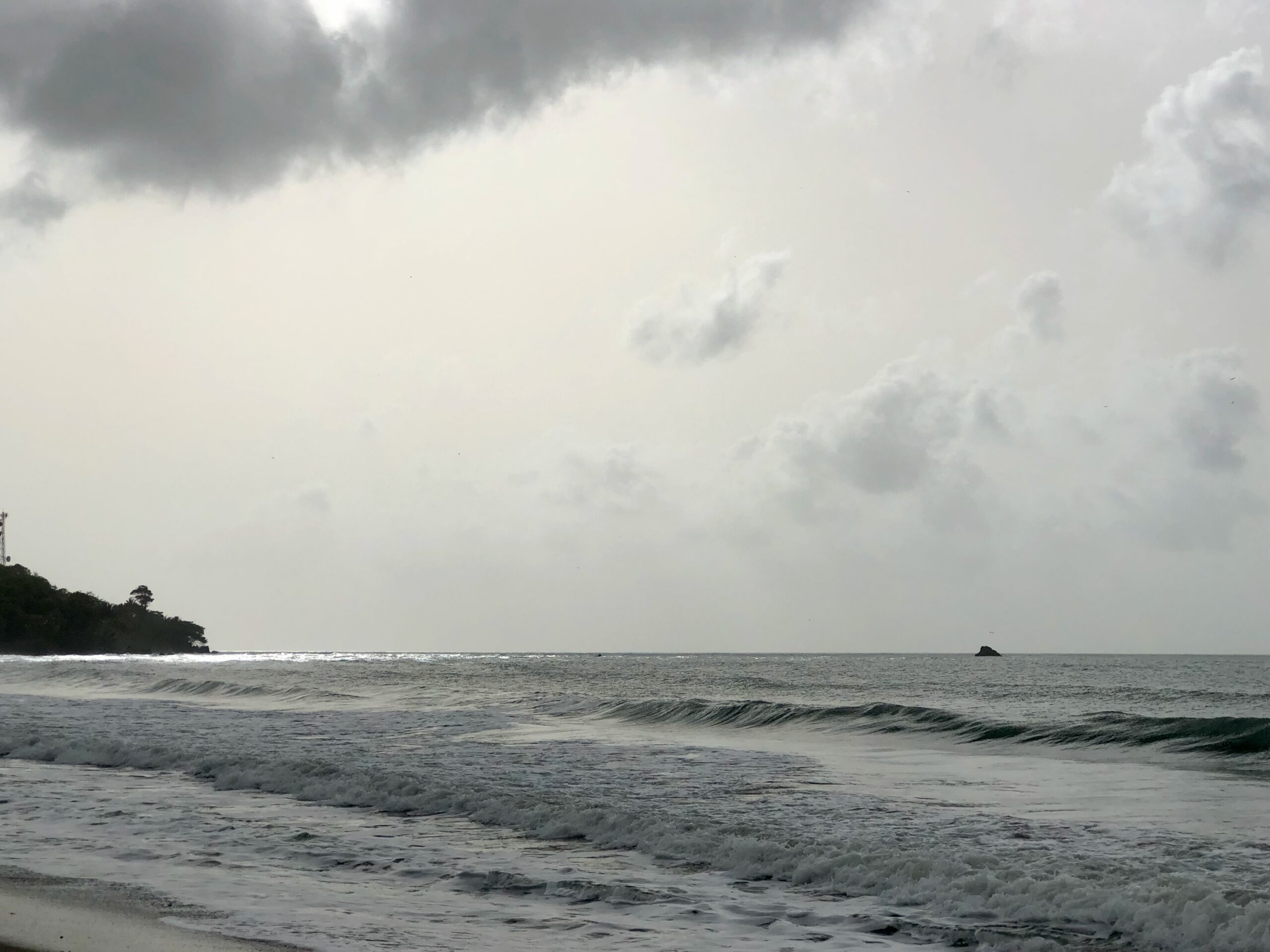 At just over a kilometre in length, Grande Rivière is one of the most prolific leatherback turtle nesting sites in the country. The surrounding village, understanding how closely intertwined its livelihood is with sustainable environmental practices, tries to be as low-impact on the environment as possible, and has formal community groups that actively patrol the beach to protect the turtles and educate the visitors that come to see them during the nesting season, which runs from March to August each year. 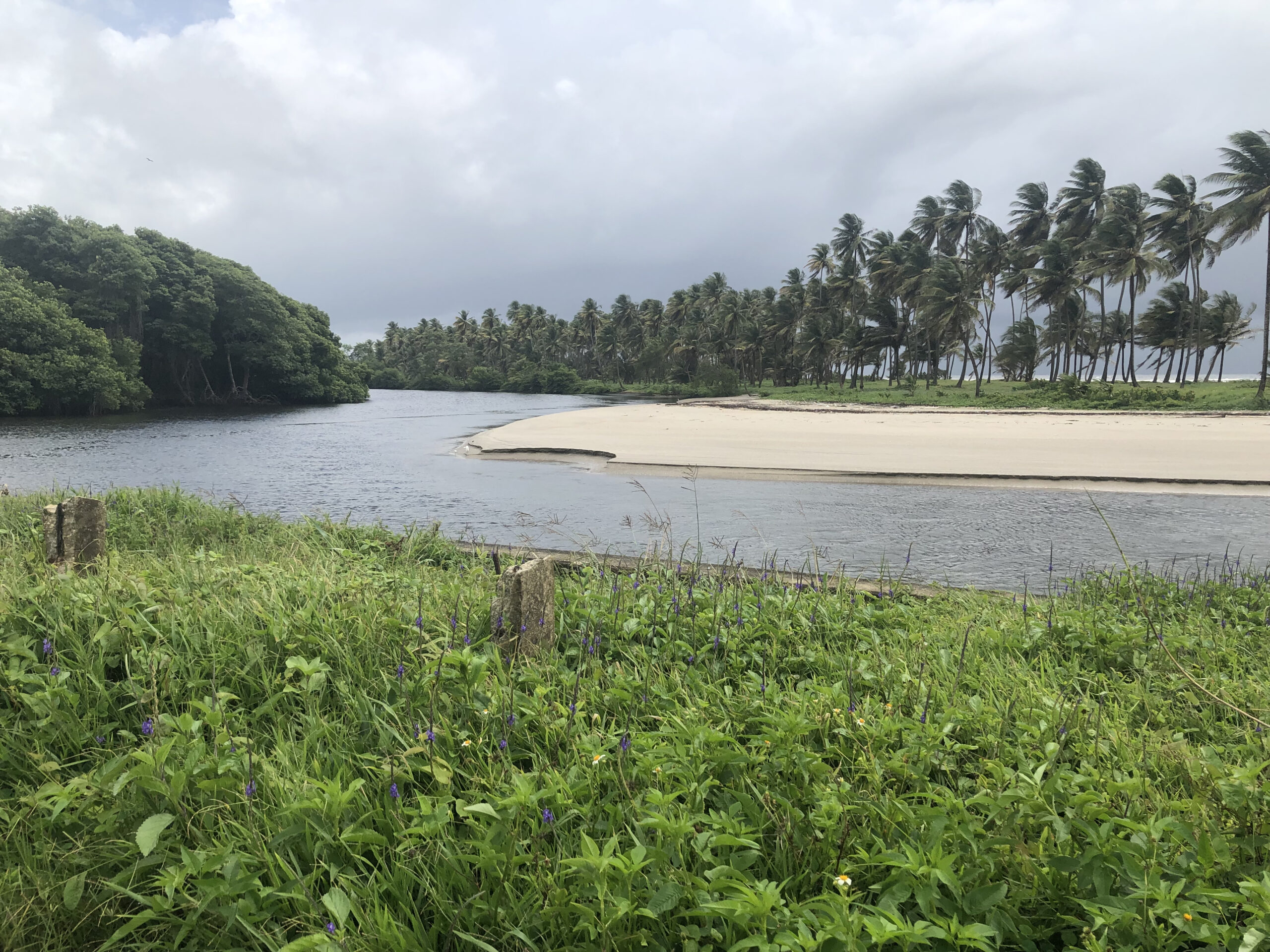 The point at which the Nariva River meets the Atlantic Ocean on Trinidad's Manzanilla stretch along the island's east coast. Photo by Janine Mendes-Franco, used with permission.

This environmentally sensitive area along Trinidad's beautiful east coast is home to the Nariva Swamp, the country's largest freshwater wetland, which has been designated a Wetland of International Importance under the Ramsar Convention, and the Bush Bush Wildlife Sanctuary, which is highly biodiverse, home to more than 200 species of animals, including birds, reptiles and mammals. 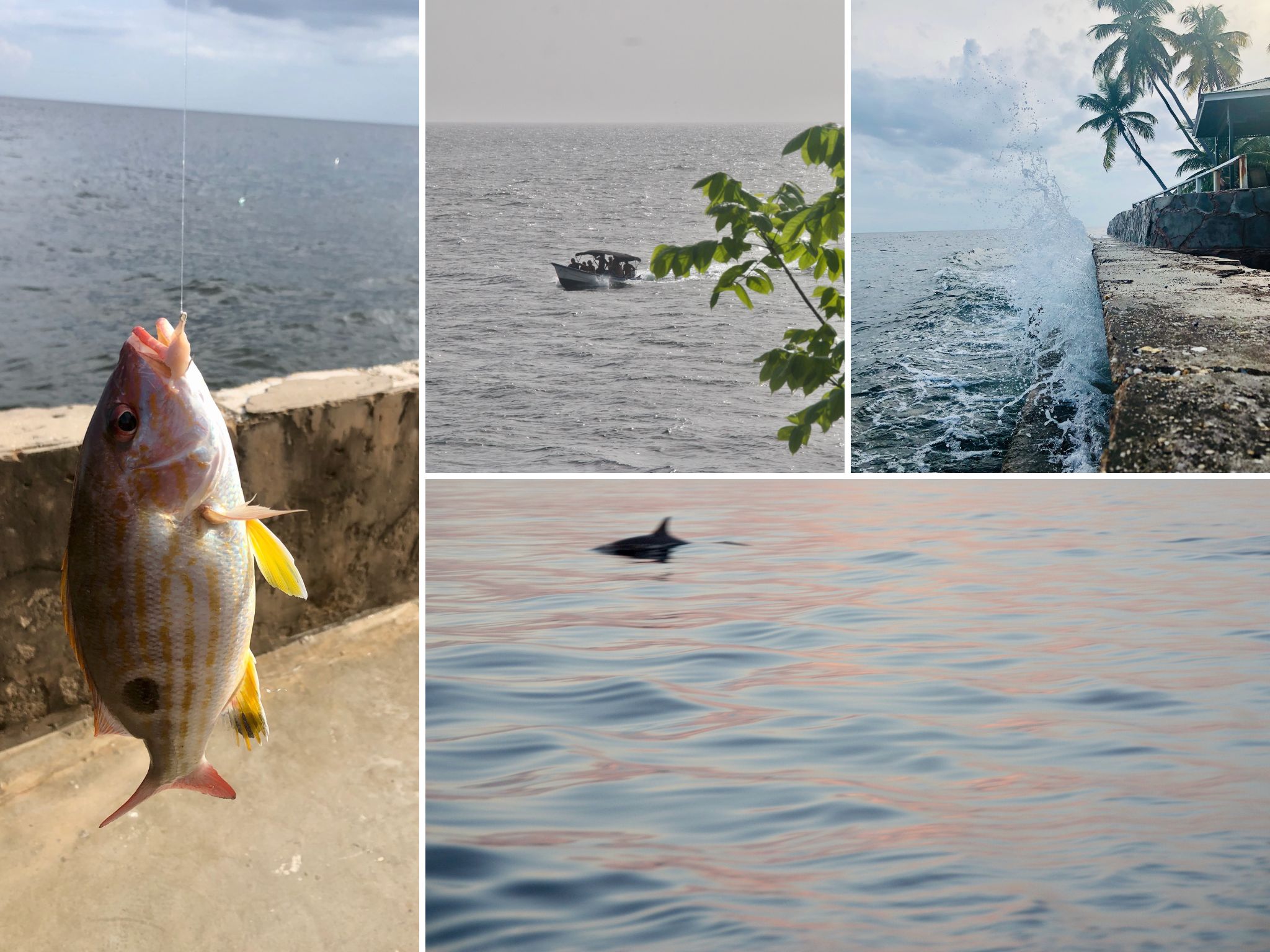 Clockwise from left: A fish caught ‘down de islands'; pleasure-boating off the island of Gaspar Grande; a wave splashes the jetty of an island home; a dolphin follows a boat at dusk. Photos by Janine Mendes-Franco, used with permission.

The cluster of smaller islands that dot Trinidad's north-west coast is home to many vacation homes, where people fish, boat, and socialise (what Trinbagonians call “lime”). It is not unusual to spot dolphin pods, sea turtles and the occasional whale in the deep waters surrounding the islands. 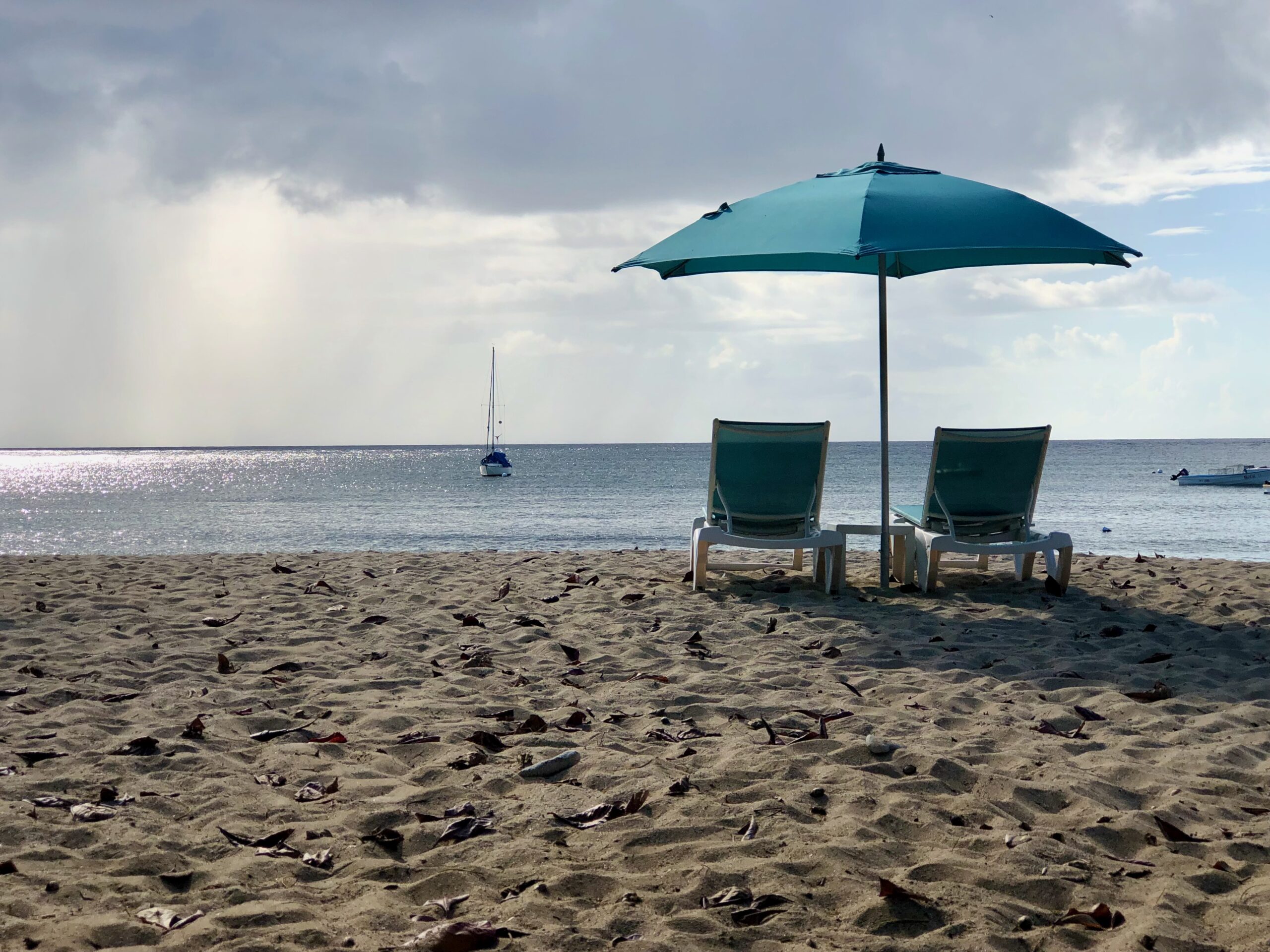 Because Trinidad sits at the mouth of Venezuela's Orinoco River, the waters surrounding the island do not conform to the turquoise blue stereotype of Caribbean oceans; Tobago, on the other hand, is postcard-perfect, and much of its economy relies on tourism, both international and domestic. 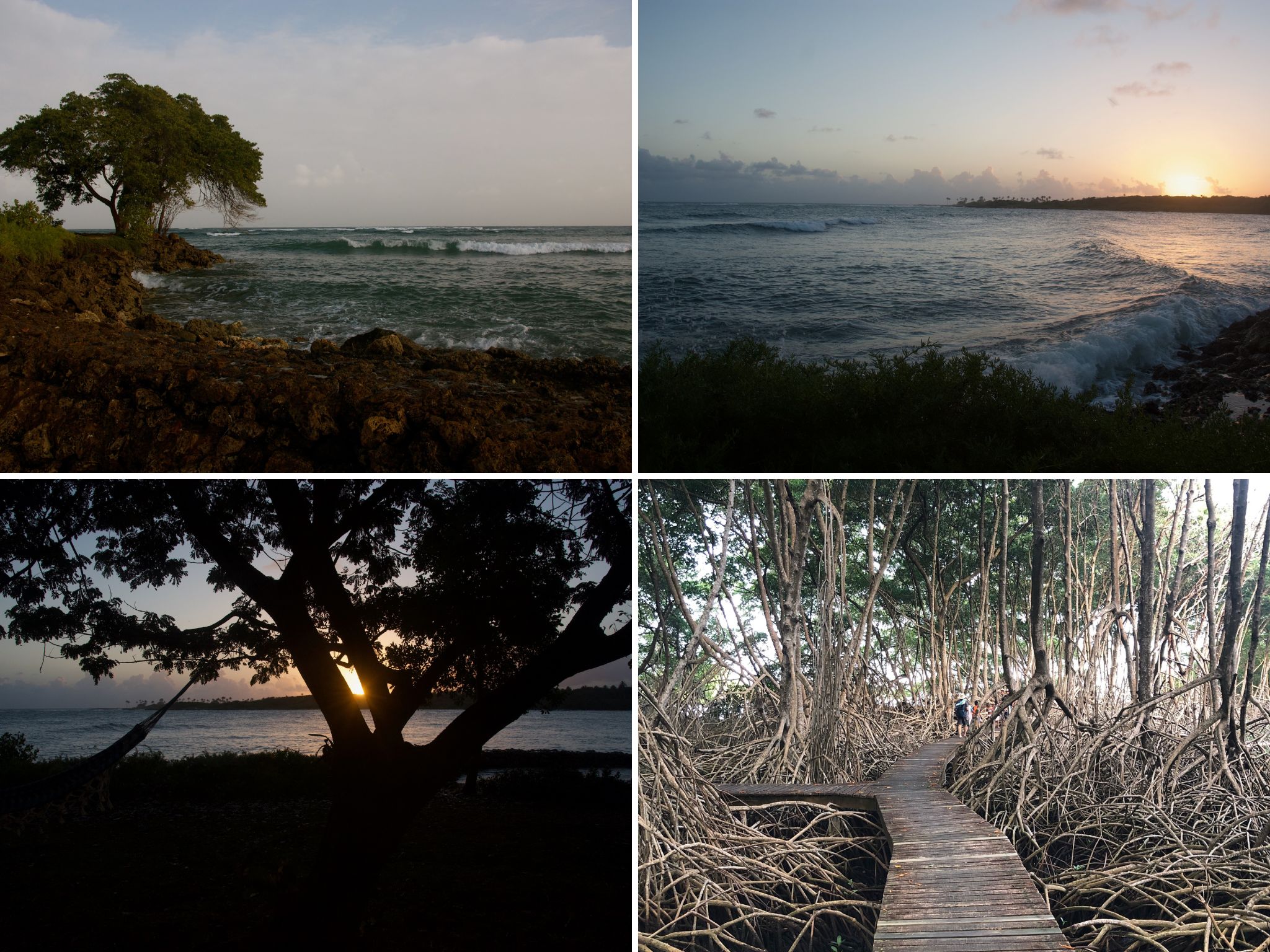 Petit Trou Lagoon, located in the area of Lowlands on Tobago's southern, windward side, boasts a mix of salt and fresh water, where the Atlantic Ocean rolls in and meets the brackish water of the mangrove-lined lagoon. The surrounding property has been developed into a vacation destination, with villas, larger vacation homes and a golf course and, despite initial talk of turning the lagoon into a marina, it has been left in its original state, with minimal developmental impact on the surrounding ecosystem. The lagoon attracts kayakers and paddle boarders, many of whom enjoy taking in the stunning scenery and its wide variety of bird life.

The extensive boardwalk that runs along the network of mangrove trees is a joy to visit, although a 2021 report on the area's mangroves found that they were threatened by a condition known as “dieback,” a disease affecting woody plants in which they progressively lose twigs, branches, shoots, or roots, starting at the tips — likely linked to the heavy annual influx of sargassum deposits. This is extremely concerning, as mangroves are a critical liaison between marine and terrestrial ecosystems such as seagrass beds and coral reefs.

There is no doubt that the climate crisis is affecting the good health and sustainability of our oceans. Post COP-26, unless global governments commit to “1.5 to stay alive,” sea level rise will continue to impact coastal communities, there will be continued acidification of our waters, and Caribbean coral reefs and mangrove forests will continue to wither. To have any hope of our oceans looking and functioning as they once did, collective action is critical, not just for sustainability, but for survival.