A delicate balance between memory and politics 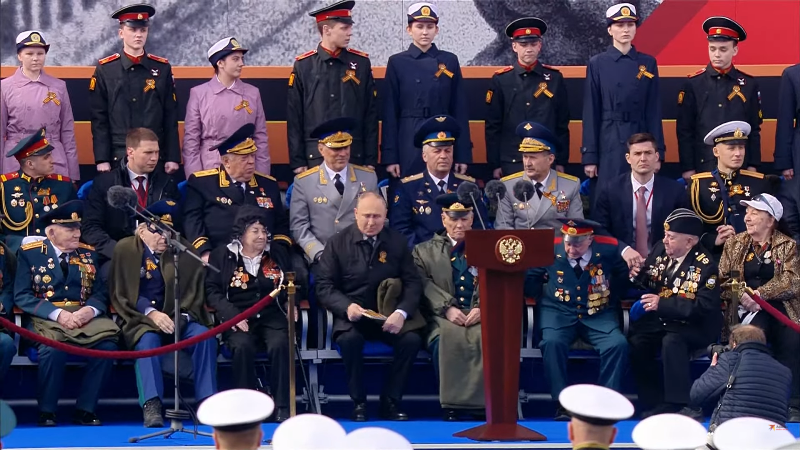 On April 24, 2022, Tigran Keosayan, a television host and one of the most prominent faces of the Kremlin’s propaganda machine, released a video calling the Kazakhs “cunning-asses” (хитрожопые) for “canceling” the Victory Day parade, threatening Kazakhstan and other former-Soviet states with a Ukraine-like scenario. Keosayan, along with his wife Margarita Simonyan, the head of Russia’s state-owned conglomerate RT (formerly Russia Today), were instrumental in implementing Russian militaristic propaganda, and are under restrictive sanctions by the European Union for “actions undermining or threatening the territorial integrity, sovereignty and independence of Ukraine.” Both of the mouthpieces of Putin’s regime also had dubious commercial gains through PR projects and movie production, involving in their corruptive schemes prominent figures from the presidential administration, as was revealed by the Navalny team.

Historically, Victory Day, on May 9, which commemorates the victory over Nazi Germany in 1945, was not even a holiday in the Soviet Union, let alone one celebrated by a parade — the first ever military parade of the post-war era was held only in 1965. It was the Putin regime that systematically expropriated Victory Day into governmental policies, gradually making it the core of the state propaganda. The past five years in a row Victory day was the most popular holiday among Russians, ahead of New Year and Easter. Interestingly, it was New Year that Stalin designated a holiday instead of Victory Day in 1947.

From the ideological point of view, the victory over Nazi Germany turned into one of the most influential and universal tools of Putin’s rule, as it became instrumental in legitimizing the regime, suppressing political dissent, and pursuing an aggressive foreign policy, including the war in Ukraine. Since current Russian propaganda massively relies on broad, multichannel dissemination and falsehood, Victory Day plays an important role in it. In this regard, Putin’s last Victory Day parade speech from May 9, 2022, was full of associations with the fight against Nazism, coming back and forth from the World War II to “neo-Nazis” in Ukraine, who “the US and their minor companions count on.”

Over time, the concept of victory recreated in Putin’s Russia would gradually become more Russocentric, often by ignoring the contribution of the Allied Powers contribution to the victory, and even introducing a law that prohibits the denial of the decisive role Soviet people played in defeating Nazi Germany, while terms like “traitors” and “Russophobia” started being incorporated into his Victory Day speeches. On May 9, 2021, the Russian president stated that “in the most difficult times of the war, at the most decisive battles that defined the outcome of the fight against fascism, our nation was alone.” As the celebrations became more politicized, prioritizing the current state of affairs over the past, Putin stopped congratulating the heads of states of Ukraine and Georgia on Victory Day, while over time fewer states were willing to be associated with Putin’s Victory Day celebrations. Thus, the Tajik President Emomali Rahmon became the only foreign leader to attend the Victory Day parade in Moscow on May 9, 2021, while the Victory Day parade of 2020 that was postponed to June 24, 2020, due to COVID-19 considerations, was attended only by the leaders of Belarus, Kazakhstan, Kyrgyzstan, Moldova, Serbia, Tajikistan, Uzbekistan, as well as the heads of the Abkhazia and South Ossetia, the breakaway provinces of Georgia. Needless to say that no foreign leader visited the Victory day parade in Moscow in 2022. 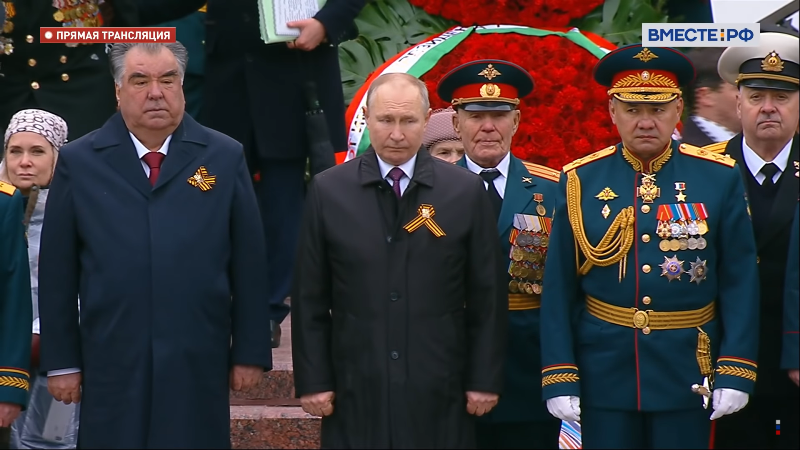 In mid-April 2022, the Kazakh Ministry of Defense announced that there would be no military parade on Victory Day, and the celebrations would be confined to “military-patriotic events” instead, citing the need to save budgetary funds and prioritize other tasks, despite the 30th anniversary of the Kazakh Defense Forces. Moreover, the so-called Immortal Regiment (Бессмертный полк), the marches to commemorate war veterans, were canceled in some regions of Kazakhstan, sometimes due to a growing negative response, as was the case in Aktau in western Kazakhstan. Before the events, the Immortal Regiment was officially renamed “Reverence for the Heroes” (Батырларға тағзым). In the meantime, the founders of the Immortal Regiment movement denounced their affiliation with the marches under the current name amid massive engagement of the Ukraine war rhetoric into it, as officials encouraged participants to bring in portraits of Russian soldiers killed in the current war in Ukraine.

Uzbekistan, which, unlike most of the post-Soviet states, officially refers to the war as  World War II (not the Great Patriotic War), decided not to hold a military parade on Victory Day, which was officially renamed the Day of Remembrance and Honor (Xotira va qadrlash kuni), although the 30th anniversary of the Uzbek Armed Forces in January 2022 was celebrated with a military parade. On the other hand, despite being traditionally sponsored by the Russian embassy in Uzbekistan and being criticized by the Vice Chairman of the lower chamber of the Uzbek Parliament for being a propaganda tool, the Immortal Regiment was nevertheless held, gathering a mere 200 people. 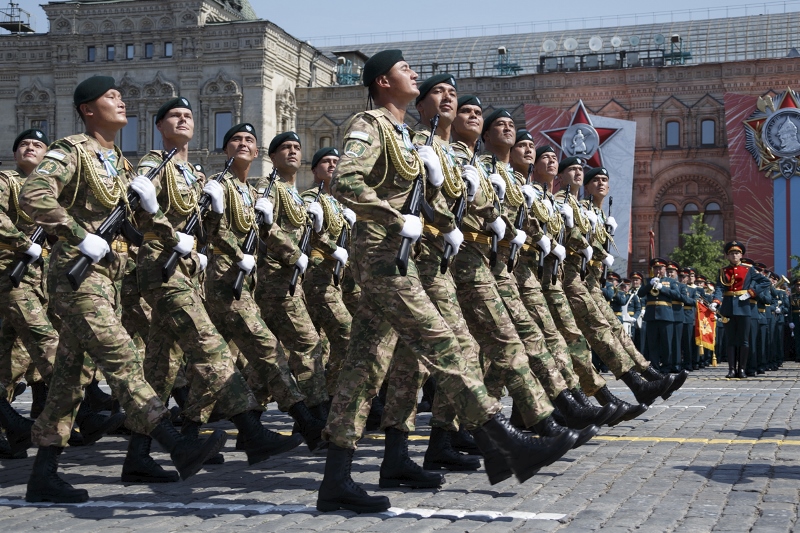 Kyrgyzstan would also abandon the military parade traditionally held on the Ala-Too square in capital Bishkek, switching to a “requiem gathering” (митинг-реквием) instead. As for the Immortal Regiment, it was held despite objections over associations with current Russian aggression in Ukraine, although the State Committee for National Security warned the population against wearing military uniforms or the letter “Z” (also known as zwastika), the militarist sign of the Russian troops in Ukraine. The Kyrgyz president Sadyr Japarov also joined the debate, asserting that “no one has the right to ban this march.” Interestingly, Bishkek became one of the few places in Central Asia to host a pro-Russian demonstration supporting Putin and his “special military operation,” and denouncing “fascism in Ukraine.”

Tajikistan, whose president was the last and only foreign leader to attend the military parade in Moscow in 2021, became the only Central Asian state to hold both the military parade and the Immortal Regiment. The latter, organized by the Russian diplomatic mission and governmental organizations, was nevertheless regarded by some as Moscow’s propaganda tool that threatens the country’s independence. Nevertheless, the military parade was not held at Dusti Square, the main square for national ceremonies, but the Victory Park in Dushanbe. A minor military parade was also held on the Russian 201st military base in Tajikistan, officially the largest military base outside Russia. The role of the base seems especially vital these days, as the country becomes more dependent on Russian military assistance amid rising cross-border attacks from Afghanistan.

In Turkmenistan, where, unlike other Central Asian states, Victory Day is currently not a public holiday, the celebrations were confined to commemorations and concerts without military parades, while the Immortal Regiment, organized by the Russian embassy, was held in the international Russian–Turkmen school. Since independence, the  military parade on Victory Day has been held only once, in 2020 amid the global pandemic.

The Russian criticism and public shaming of Central Asian states for  not holding military parades, however, did not go hand in hand with their boosted patriotic rage as the exclusive keepers of wartime memory, since soon it became evident that Central Asian states pay much greater monetary aid to the veterans of the World War II than Russia itself. Thus, the annual monetary aid in Kyrgyzstan and Uzbekistan were approximately nine times greater than that of Russia, while Kazakhstan pays between 17 to 31 times of that amount. Oddly, the unfashionably low payment to war veterans is not the outcome of the current sanction-torn economy of Russia, but has been a trend for the last few years.