The Economist draws fire after criticizing independent media in Myanmar

“The Economist is at risk of believing the Burmese military's propaganda” 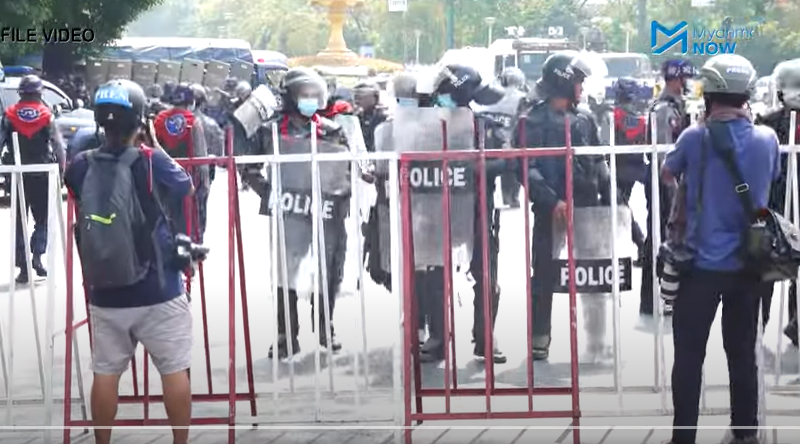 Myanmar journalists and citizen journalists face tremendous risks for covering the ongoing conflict in the country. Screenshot from a YouTube video of Myanmar Now News.

Several independent media outlets in Myanmar condemned an article published by The Economist on May 19 which criticizes the local media for “painting an overly optimistic picture of the war.”

The publication is referring to the armed resistance against the junta which grabbed power during the February 2021 coup.

Titled “Myanmar’s resistance is at risk of believing its own propaganda,” the article cast doubt about the accuracy of online reports that seemingly depict the looming defeat of the junta.

To spend time on Burmese social media or online news sites is to think the end is near for Myanmar’s military junta, which seized power in a coup last February.

But peer past the virtual fog, and a far bleaker picture emerges.

The article ended with a reminder that “self-deception is a poor military strategy” which is addressed to all media outlets, including the mouthpieces of the junta.

Mizzima, an independent news network, suggests that “The Economist writer does not have a particularly good grasp of Myanmar and the current crisis.” It added that reports from independent media outlets should be distinguished from what is shared on social media. It clarified that while independent media networks are more circumspect in reporting the conflict, many social media users often post “exaggerated claims mixed in with all the photos and memes” in support of anti-junta forces.

Meanwhile, the response of the Democratic Voice of Burma (DVB), another independent news outlet, is titled “The Economist is at risk of believing the Burmese military's propaganda.” It dissected the arguments raised in the article of The Economist and insisted that there’s a basis to claim that the resistance is surging forward. It cited the junta's unprecedented military losses in the field, the low number of new army recruits, the difficulty in collecting tax payments from citizens opposed to the coup, and the growing number of multinational companies withdrawing from the country. It also noted that in reviewing the modern history of the country's democratic struggle “the opportunity for Burma’s people to finally put an end to their torture and extortion at the hands of the junta has never been greater.”

After the coup, the junta revoked the licenses of independent media outlets while journalists accused of supporting the opposition were detained under dubious charges. Media outlets increasingly relied on the work of citizen journalists (CJs) for their coverage. Global Voices has previously reported about the challenges and dangers faced by journalists especially those who are reporting from the frontlines.

DVB acknowledged that biases are common in chaotic environments like post-coup Myanmar, but it asserted that the reports of CJs are credible.

…these are still trained individuals with an understanding that excluding unfortunate facts relating to the failings of the revolution may actually be harmful to the resistance movement as a whole.

It also explained why independent media networks are careful in releasing reports on sensitive topics such as defections in the army, civilian casualties, and the impact of the civil war.

And why does this feedback loop between CJ, independent media, and forensic fact-checker exist? To promote current awareness leading to real-world action; to record a tragedy so others can learn from posterity; and, most crucially, to guarantee that, when the country’s war criminals finally face The Hague, lawyers will be armed to the teeth with evidence to fight for the memory of each individual life that has been torn apart, over decades, by the Burmese military.

It warned against lumping the independent media with state media outlets that publish unverified information.

…dismissing reports as “propaganda” is unhelpful, and perpetuates suffering that could be lessened if those in power chose instead to listen to the voices of those affected by the conflict.

Igor Blazevic, a senior adviser with the Prague Civil Society Centre who has been monitoring the situation in Myanmar for several years already, vouched for the integrity of independent media outlets. He compared the media coverage in Ukraine and Myanmar, noting the vast coverage differences in each:

We are able to read much more about losses of resistances fighters in Myanmar than we get to read about the Ukrainian army’s losses in the war with Russia. However, I have not noticed The Economist criticizing the Ukrainian media (or any international media which has a significant presence in Ukraine) for not reporting Ukrainian military losses.

He also defended the passion of local journalists in Myanmar and their consistency in exposing the atrocities of junta forces:

They do that with emotion, but without distorting any facts. There is nothing ‘propagandist’ about reporting crimes and atrocities or identifying who is to be blamed for them with outrage and anger.

On Twitter, The Economist was criticized for its “inaccurate” and “unethical” reporting on the work of independent media.

Economist piece is inaccurate and unethical. It attacks the credibility of independent #Myanmar media whose journalists risk & sacrifice their lives to report on Myanmar military's terrorism w/o offering a right of reply.@TheEconomist should rectify this https://t.co/6V8zhq0R3G pic.twitter.com/f9e3Z1gANA

Opposition groups that organized a civil disobedience campaign also advised The Economist to double-check its claims.

Not recognizing the fact that this is an unprecedented situation is a fatal flaw in any analysis about Myanmar. People on ground are very much aware of their own shortcomings. Nobody believe that a victory is imminent either. Get your facts right @TheEconomist.