The last Kenyan vinyl pressing plant shut down 33 years ago 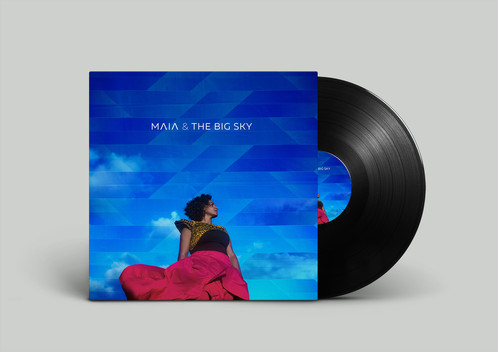 The album cover of Maia Von Lekow’s album ‘Maia & the Big Sky” was released both in digital and vinyl. Image source; Hapa Kenya, used with permission

Kenyan artist Maia Von Lekow, a songwriter and musician, released her sophomore album “Maia & The Big Sky” in 2018 on both digital and vinyl records. No Kenyan musician has released an album on vinyl since the late 1980s. Since music listeners have pivoted toward digital streaming platforms, Maia is one of the few artists who views vinyl records as more than just a novelty.

In this part two of our three-part series on vinyl in Kenya, we highlight women like Maia who are catalyzing an ongoing global vinyl revival. Read Part one here.

Kenya’s vinyl record history dates back to the late 1950s. However, it was not until the mid-1960s when, prompted by a vibrant interest in local recordings, local shops such as the E. A Records pushed Kenya into the record-pressing business.

From the 1960s to the 1980s,  Nairobi was the heart of East and Central Africa’s music production and vinyl pressing industries. Bands from as far as the DRC Congo and Zaire traveled to Nairobi to record and produce their music.

It has been 33 years since the last vinyl pressing plant shut down in Kenya. In the early 1990s, the global music recording business had just undergone yet another musical format evolution. Users’ attention shifted from vinyl to cassette tapes, and then to CDs. CDs became the de facto release format for decades until streaming came along in the early 2000s.

Another Kenyan artist Blinky Bill whose album, “Everyone’s Just Winging It And Other Fly Tales,” was also released on both digital and vinyl in 2018. These artists’ choice of musical formats is intended to honor their African music heritage and pay homage to the many African musical giants whose music was released on vinyl between the 1960s and the late 1980s.

Maia is the daughter of music legend Sal Davis. Davis’s hits released in the 1960s include “Makini,” “The moon was Yellow,” and his cover version “Unchain my heart” by Ray Charles were all released on the 45 RPM 7-inch “extended-play single” (EP) format.

What inspired her to release her latest album on vinyl? “It was the nostalgia!” she said.

She told Global Voices during an email interview.

We didn't have a record player in our house when I was growing up, however, our neighbour did. We used to go there and put the records on and just the idea of removing it from the sleeve, putting it onto the player and dropping the pin, changing to the B side. There is something very special about the whole process of playing vinyl.  I wanted to replicate this in the printing of my music. Being one of the first few Kenyan artists to print on vinyl. That for me was a space finding idea.

She describes the process of getting her vinyl pressed as a tricky, difficult, and expensive process. There are no pressing plants in Kenya. However, last year she performed a few shows in Australia and was able to print from there. But they still had to figure out the logistics of bringing the records back to Kenya for distribution and sale.

“Shipping was expensive, so then we had to do it in manageable quantities that could fit in a suitcase. It’s not feasible if you are a big selling artist.”

In the end,  she admits that it was all worth it.

What is great is that there’s a real need. We sold most of my album on vinyl in Kenya. Our main outlet was Jimmy Rugami’s shop. The fact we included a link on the vinyl covers for one to get the digital version meant that buyers were able to have the best of both worlds. It has been really wonderful seeing so much interest in my music as well as in both old school and contemporary. Am glad that we did it.

When discussing how she was influenced by her dad’s music, she recalled his vinyl releases and a long-standing appreciation for the format.

For me, it was also about how we bridge that gap between the older and younger generation of musicians and listeners. vinyls have endured the test of time. 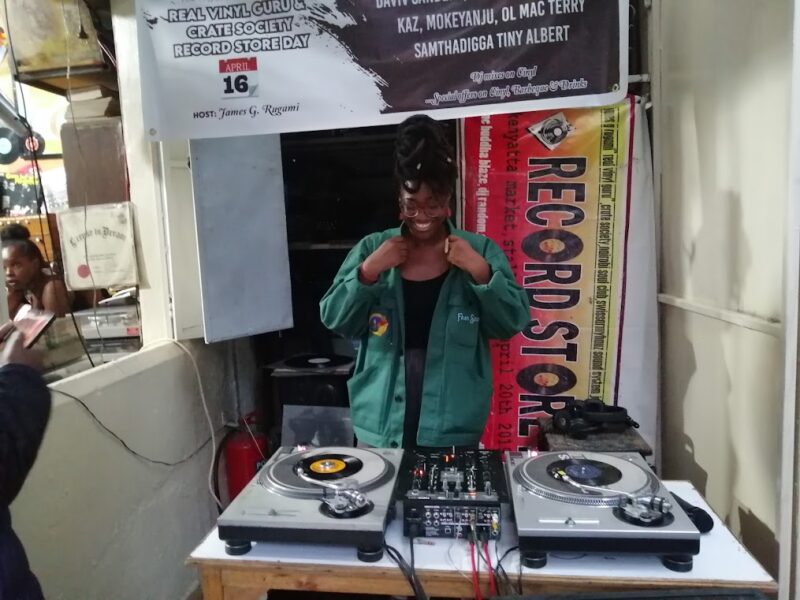 Mokeyanju at Stall B5 in Nairobi playing a DJ set to mark World Record Store Day. Photo by author.

While the Kenyan Deejaying industry is male-dominated, a few female Deejays have managed to play and own their space.

Jumoke Adeyanju, aka Mokeyanju, is a Nigerian-born woman DJ who has made Kenya her second home. A passionate vinyl selector and DJ, she is a multifaceted artist, poet, and curator with a deep-rooted affection for the East African and Caribbean cultures and sounds. Mokeyanju was one of the DJs who played a set at Rugami’s record store to mark this year’s world record store day.

You are unlikely to catch Mokeyanju in the clubs rocking a crowd. Instead, she works with various organizations curating online shows, such as her recent Sauti ya AOKO (the sound of Akoko), which was a live poetry and vinyl session she did for the organization Refugee Worldwide.

She, like her fellow Kenyan vinyl DJs, maintains an active presence on social media. A globetrotter who spends most of her time shuttling between Europe, Nigeria, and Kenya, her fans can easily follow her gigs and listen to her latest mixes online.

Kenya is experiencing a vinyl revival. Heralded, in large part by the growing interest in East African music both at home and globally, there is a resurgence of interest, especially among the younger generation of music lovers eager to reconnect with their vinyl musical heritage.