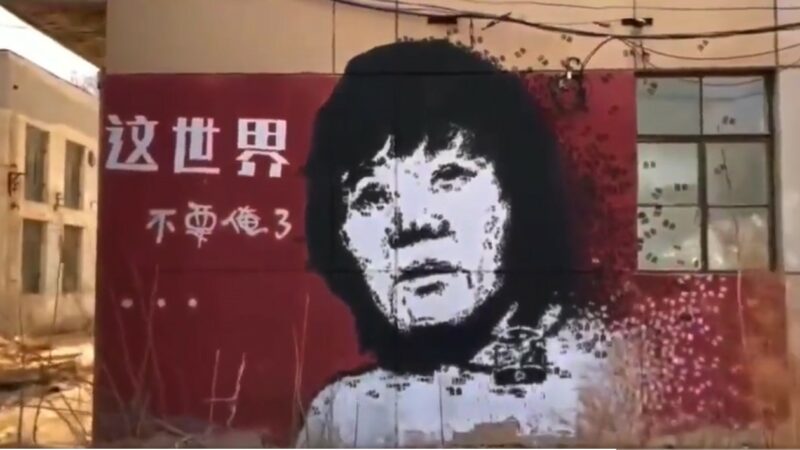 A graffiti of the Xuzhou chained woman. Screen capture from a viral video on Twitter.

The People's Republic of China (PRC) has exercised strict control over women’s reproductive rights since 1949 as the newly established socialist state, following the Soviet model, prioritized state goals over individuals and family interests.

Through the propaganda machine, the former Chinese Communist Party (CCP) Mao Zedong encouraged people to reproduce to create manpower for the newly established nation. Within a decade, the country's population doubled. After tens of millions died in the Great Famine (1959–1961), Mao boosted the birth rate again. By the mid-1970s the country faced an overpopulation problem and new leader Deng Xiaoping reversed the population policy in the late 1970s.

Between 1978–2015, the government exercised control over women’s bodies through policies like the three-decades-long One Child Policy, which was enforced through measures such as the promotion of late marriage and contraceptives, economic incentives and sanctions, and coercion such as forced abortions and sterilizations.

However, as baby boomers from the 1960s to 1970s were ageing, China recognized it may face a serious labour shortage in two decades. According to local research, China's labour force (those aged 16–65) would be reduced from 790 million in 2020 to 718 million in 2040 and 666 million in 2050. Hence, Beijing abolished the One Child Policy and replaced it with the Two-Child Policy in October 2015, then with the Three-Child Policy in May 2021.

The divorce law makes marital separations more difficult as it demands couples go through marriage counselling upon submitting their divorce applications. They must also reconfirm their divorce after 30 days or their applications are automatically cancelled. The abortion guideline is a campaign to reduce non-medical abortions in China. Many Chinese feminists are worried that the authorities would list more concrete conditions to restrict abortions in the future.

Though the divorce rate fell by 43 percent one year after the law was enacted, the number of marriage registrations continued to decline to 7.63 million in 2021, approximately 1 million less than in 2020. And the average marriage age is getting later and later.

The policies are not only ineffective, but they also attract a lot of criticism from feminists who slam the government for infringing upon women’s reproductive rights and marriage freedom.

China will reduce “not medically necessary” abortions. This is very alarming, but I'm not surprised. This government is so consistent in treating women's body as a tool for its economic development goals, and in violating women's reproductive choice and bodily autonomy. pic.twitter.com/IGGfGKeQbo

Amid the backlash, the censor stepped in to suppress independent and critical female voices. In April 2021, and two weeks before the introduction of the Three-Child policy, the web censor launched a crackdown on online feminist groups which advocate for the 6B4T movement.

Originated from South Korea, members of the 6B4T movement renounce sex, child-rearing, dating and marriage with men. The Chinese 6B4T  feminist groups were banned on Chinese social media and labelled by the web censor as “extreme” and “radical”.

At the same time, nationalists were mobilized to attack feminists who criticized hyper-masculine culture on social media.

In recent years, online nationalist trolls have stigmatized feminists who advocate for women’s reproductive rights and sexual rights against patriarchy as “female fists” (女拳) who picked fights with men and upset harmonious gender relations in China and blame them for the country’s low fertility rate. Some even accuse outspoken feminists of conspiring with “foreign forces” because they are critical of some of the state policies.

[female fists]… encourage girls to belittle and despise males. They make use of gender perspectives to create conflicts within the society. Even though their impact is limited, the brainwashed ones have given up the will to give birth and joined the “female fists” to help them spread their ideas. On the other side of the same coin, they also agitate males into hating females as women are becoming less adorable, too demanding and looking down on males…

The online crackdown has extended to LGBTQ+ populations as well. In July 2021, the censored removed a dozen LGBTQ+ public accounts on WeChat and pro-government commentators spread the idea that homosexuality was imported from the West and is at odds with traditional Chinese values.

Despite the crackdown, feminist critiques of the patriarchal system and violence against women re-emerged in early 2022 after the Xuzhou chained woman incident came to light. In a viral video, which was shot to promote the local authorities’ poverty relief program, a woman appeared to be chained to a wall. Investigations later revealed that the victim was abducted for more than 20 years and forced to give birth to eight children. Images of the chained woman went viral on social media as people began protesting against sexual slavery and the systematic oppression of women in China.

Yet, after the public outcry subsided, Chinese feminists faced another round of attacks from state-owned media, pro-government opinion leaders and the Communist Youth League of China (CYLC).

On 12 April, the CYLC published a post on Weibo calling extreme feminism “a cancer” that had to be eliminated. The hostile post was written after a flood of online criticisms of the youth league’s visual representation of the CCP’s heroes on an earlier post under the tagline “Every young generation has lived up to their time” (每一代青年都无愧于时代).  In the league's six historical photos collection, there isn't a single female figure.

Media outlets should reduce or cut reports about “independent women” and “DINK” (Double Incomes with No Kid) as they go against the mainstream values. Media resources should spend on reporting satisfactory family life… creating a consensus among young people that “yousheng youyu” (优生优育 eugenics or quality birth and upbringing) is an obligation.

However, the choice of not getting married and not having kids is not confined to Chinese feminists. The low fertility rate has become a trend in the majority of developed countries. Likewise, the Chinese urban middle class in first and second-tier cities prefers to invest time and energy in their careers, rather than children.

In addition,  since early 2021, Chinese millennials have started the Lying Flatism movement, a counterculture campaign that advocates for a simple and less materialistic lifestyle and against the highly exploitative work culture. One of their strategies is to reject getting married and having kids.

After the outbreak of Omicron, hundreds of millions of Chinese people were deprived of their rights and freedom as they were forced to live under lockdown, keep going through PCR tests and have their movement restricted by the health code under the country’s zero-COVID policy. Some have lost their hope for the future and joined the “lying flatists” in declaring themselves the last generation.

The Chinese nationalist may continue to blame feminists and LGBTQ+ people for the population crisis, but the ideological struggle will not save the birth rate from collapsing.