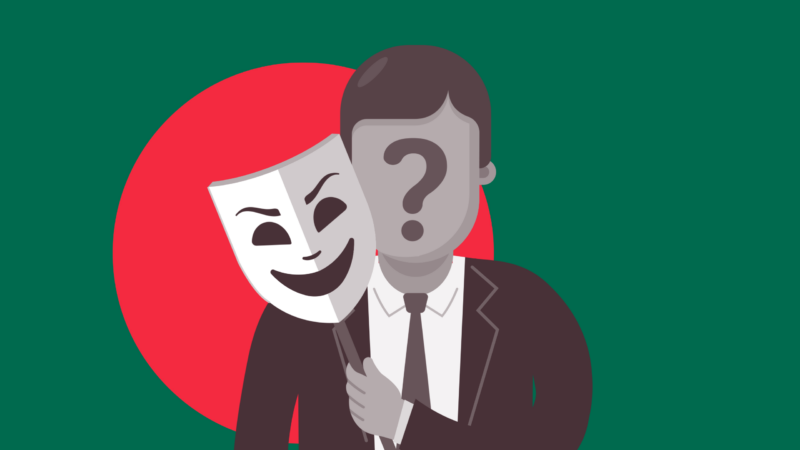 Illustration made by Global Voices.

This story is part of Undertones, Global Voices’ Civic Media Observatory's newsletter. Find out more about our mission [1], methodology [2], and publicly available data [3]. Subscribe to Undertones [4].

In Bangladesh, Russian favoritism is subtle but can be detected through deep observation. At first glance, narratives regarding Russia’s war on Ukraine reflect Bangladesh’s foreign policy principle of neutrality. In March, Bangladesh abstained [5] from condemning Russia’s invasion at the United Nations General Assembly, citing its philosophy of “friends to all, malice to none”.

When digging deeper, however, justifications vary, from a perceived economic dependence on Russia to anti-U.S. imperialism and historical friendship with the Soviet Union. These arguments are part of a larger pro-neutrality narrative promoted by the political and intellectual elites to the general population. All in all, government officials, scholars, and religious preachers more or less tacitly support Russia in its invasion of Ukraine.

Yet, self-censorship plays a large role [6] in Bangladesh, contributing to the fact that only a tight set of narratives are visible. Bangladesh has dropped [7] 10 notches for freedom of expression on Reporters without Borders’ latest Press Freedom Index [8]. The Digital Security Act [9] (DSA), adopted in 2018, has been used to arrest journalists and activists critical of the government or local political leaders. For many observers, this law has created a “culture of fear [10]” in order to quell dissent online.

A narrative with undertones

“Bangladesh should remain neutral in the Russia-Ukraine war” [11]

Behind a general message of neutrality, different Bangladeshi actors use historical, ideological, and economic arguments to not ruffle Bangladesh’s relationship with Russia. Media narratives are not usually openly anti-Ukraine or anti-West, but most of the wording and tones reflect a pro-Russia leaning.

The historical alliance between Bangladesh and Russia, stemming from the USSR's support for Bangladesh's independence from Pakistan, is one of the central justifications used by Bangladesh for its neutral stance in the Russia-Ukraine war. This argument is frequently found in the country’s largest editorial media, such as the Daily Star [12], the Daily Sun [13], and BDnews24 [14].

In 1971, the Soviet Union diplomatically supported Bangladesh’s struggle in its Liberation War. It is an important factor in popular narrative and historical memory and therefore is the easiest to exploit. Following independence, Russian authors and literature were widely read and distributed in the Bengali curriculum. In Bangladesh, people have grown up with reminders of Russia’s support of their state’s independence.

Government officials often mobilize this argument, leaving out the Cold War context of the time. The USSR supported Bangladesh as part of its strategic alliance against anti-Communist Pakistan and the United States.

Prime Minister Sheikh Hasina has notably said [15] that given how “Russia had safeguarded Bangladesh against the United States” in 1971, it merits a friendly reciprocation at present, especially as it is alienated on the world stage. Russia and the USSR are intentionally conflated, even though Ukraine was also part of the Soviet Union.

Chinmay Prasun Biswas, a former commissioner of taxes, describes Bangladesh's reluctance to take a stance on the Russia-Ukraine war as being a result of Bangladesh's long-standing history and relationship with Russia, the influence of which extended to the political, literary, and cultural spheres. Given his position as a former government official, his opinions may be accepted by people to be true. More analysis here. [16] 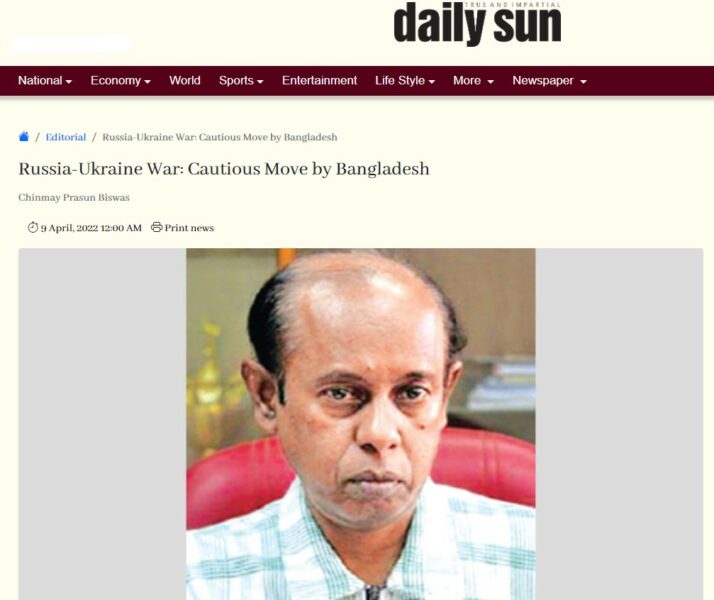 In Bangladesh, popular religious scholars preach Islam and guide followers in forming political opinions. Many of them preach an exclusionary view of Islam and promote anti-West narratives in Waz Mahfil, events where people gather to listen to religious scholars in mosques, public squares, and on social media. Although these scholars are popular, many citizens do not endorse them. They have been subject to the police’s anti-terrorism efforts [19].

In general, U.S. military incursions in the Middle East have resulted in strong anti-U.S. sentiments within intellectual and religious circles in Bangladesh. Anti-U.S. imperialism sometimes morphs [20] into anti-Ukraine sentiment, even though there seems to be a blind spot about Russia's involvement [21] in Syria.

According to religious scholars, the Russian aggression in Ukraine is a response to U.S. provocation by way of NATO expansion. Nor is the Ukrainian refugee crisis treated as an urgent problem. Instead, these scholars allege that there is hypocrisy, pointing to Muslim refugees who have been turned away by European nations. Anti-semitism — visible in how Volodymyr Zelenskyy has been targeted for his Jewish background – is also rampant.

During a YouTube debate on the Russia-Ukraine war, Enayet Ullah Abbasi [25], a popular religious speaker in Bangladesh, was asked about how Muslims in Bangladesh should react. He replied that “Muslims should either remain silent or support Russia, there is no option for the Muslims to support the US”, adding that “Muslims have no option to support Ukraine because the President of Ukraine is a Jew and believes in Zionism…Jews are the biggest enemy of the Muslims.” A good number of commenters believe that Abbasi’s opinion is logical and fact-based. More analysis here. [23]

Bangladeshi officials argue that choosing a side in the war could potentially risk their economic and security interests, even though Bangladesh has strong commercial ties with the United States as well, especially for its large textile and garment industry.

Bangladesh imported [29] 45 percent of its wheat from Ukraine and Russia and is now switching to India. However, most importantly, Bangladesh is relying on Russian investment – USD$13 billion – for its first nuclear plant, and on Russian-made military hardware [30]. Since the onset of the war in Ukraine, Bangladeshi officials have feared that international sanctions on Russia would delay the completion of the nuclear plant’s construction.

This article informs that the construction of the Rooppur nuclear power plant in northwestern Bangladesh will continue despite international sanctions against Russia for its aggression in Ukraine. This news came on the same day as the UN General Assembly vote where Bangladesh abstained from condemning the war launched by Russia against Ukraine. More analysis here. [31] 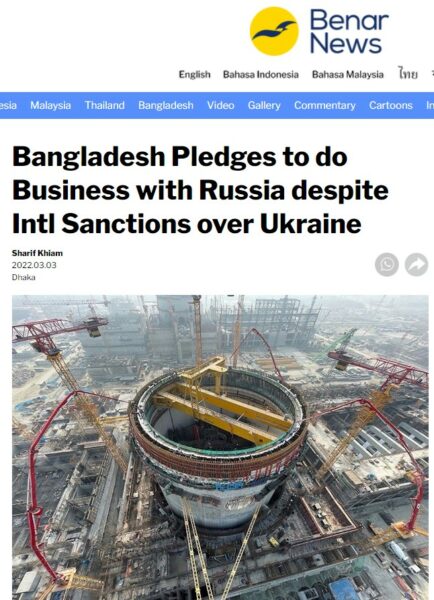 The pulse of Bangladesh: current narratives in the media