Dugin's message: Russia is not at war with Ukraine, but with the West 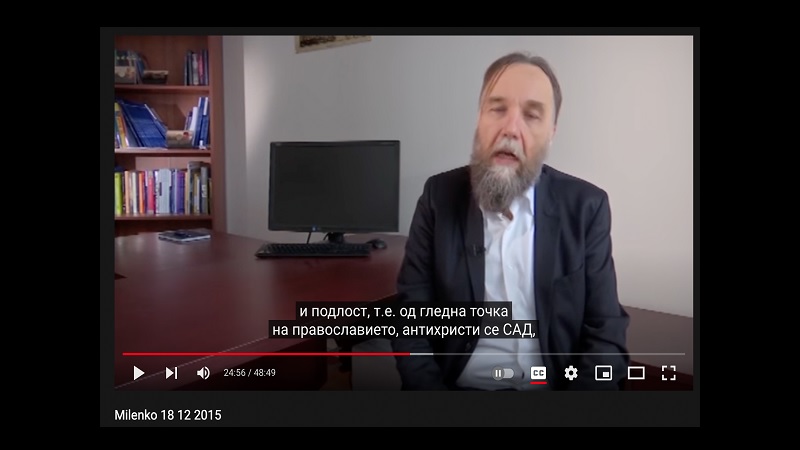 Alexandr Dugin. Subtitle reads: ‘…and perfidy i.e. from the viewpoint of Orthodox Christianity, the Antichrist is the USA.’ Photo: Screen capture of the Milenko Nedelkovski Show, December 2015.

This article by media analyst Žarko Trajanoski was originally published by Truthmeter.mk. An edited version is republished here under a content-sharing agreement between Global Voices and Metamorphosis Foundation.

Aleksandr Dugin, the ideologue of the “Eurasia Movement” and one of the most agile military agitators and propagandists after the Russian aggression in Ukraine, has been active across the wider region of Central and Eastern Europe for years.

In this brief analysis, we will look at Dugin's ideological and propaganda activities following Russia's military “special operation” i.e. the war against Ukraine,  recalling his messages from the “Eurasian” mission in Macedonia, starting from his 2015 guest appearance on the right-wing extremist TV/online video program “The Milenko Nedelkovski Show.”

On this occasion, his host, having read an article by Dugin promoting the common struggle of Christians and Muslims against the “Antichrist,” asked him directly, “Who is the Antichrist?” Dugin explicitly replies that “the Antichrist is the United States,” accusing it of being a materialistic civilization and of “sowing blood, evil, and meanness.” In the same episode, Dugin announced the collapse of liberalism, which he said would lead to the collapse of the European Union (EU), also “prophetically” indicating that “war is inevitable, a real great war.”

This was just one instance of pro-Kremlin propaganda, which combined with and supported by Macedonian anti-democratic and populist forces, that can be detected as early as 2015 with propaganda about the so-called “Ukrainian scenario,” which continued during the following years, attempting to disrupt the country's integration into NATO and the European Union (EU).

Since 2014, Alexander Dugin has been trying to justify Russian aggression against Ukraine using a wide range of propaganda techniques, narratives and media messages, including the deification of the cause (Russia and the “special operation” in Ukraine) and satanization of the opponent (Ukrainian state and the West), i.e. slandering the opponent as a “devil.”

For example, on March 13, the popular Macedonian right-wing and pro-Putin portal, Infomax, came up with an opinion piece, republished from an anonymous website called Free Globe in which Dugin sent a frightening message:

“The real war is not against Ukraine, but against the World Economic Forum and its infernal plans to destroy humanity by legalizing all kinds of perversions, sins and crimes and ultimately turning people into robots and mutants and transferring the power of artificial intelligence. We are dealing with the devil himself.”

“The Empire strikes back”?

The day before the Russian military aggression on Ukraine, Dugin announced the beginning of “the Russian Eurasian mobilization” with the propaganda slogan “New Russia is the territory of the future.” In contrast to “Glory to Ukraine,” Dugin's slogan was “Glory to New Russia,” an expression accepted by the Tsargrad movement.

Tsarigrad or Tsargrad is an old Slavic name for contemporary Istanbul or medieval Constantinople meaning “The City of the Emperor,” the center of Orthodox Christianity, also known as the “Second Rome,” and predecessor of Moscow as the true heir of the Roman Empire. For Dugin, Putin's recognition of the “republics” in Ukraine marked “the second beginning of the great Slavic reconquest.”

On March 12, Dugin was a guest on the TV show with the most popular Russian propagandist Vladimir Solovyov, who introduced him as “the leader of the international Eurasian movement.”

In his famous propaganda style, Solovyov concluded that the West had set itself the task of destroying, not so much Russia, but the Russian people, the Russian culture, the very spirit of Russian civilization. In his “philosophical” monologue, Dugin followed up on Solovyov's “official” propaganda myths, while in the background of the conversation, the Russian military machinery in action was advertised. 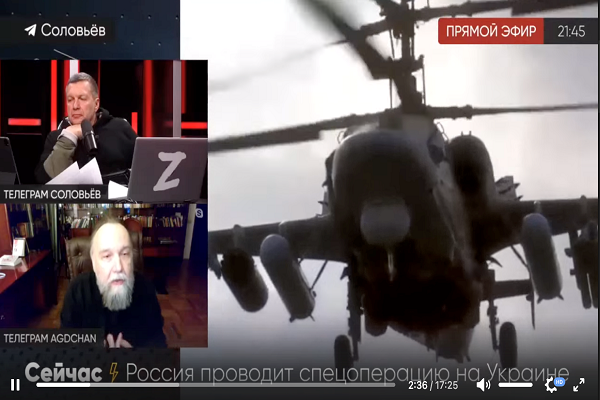 However, Dugin's real propaganda home is the Russian Orthodox TV channel Tsargrad, owned by Russian oligarch Konstantin Malofeyev, who was on the EU sanctions list in 2014 for his support of destabilizing eastern Ukraine. Dugin introduces himself as the former editor-in-chief of “Telekanal Constantinople,” and describes himself as Malofeyey’s mastermind.

Malofeyev describes Dugin as a “philosopher and like-minded person” in the introduction to his book “Empire,” promoted by none other than Dugin. At the book launch in December 2021, Dugin stated that “Christianity and the empire are inseparable” and that Russia as the “third Rome” is a continuation of Christian policy. 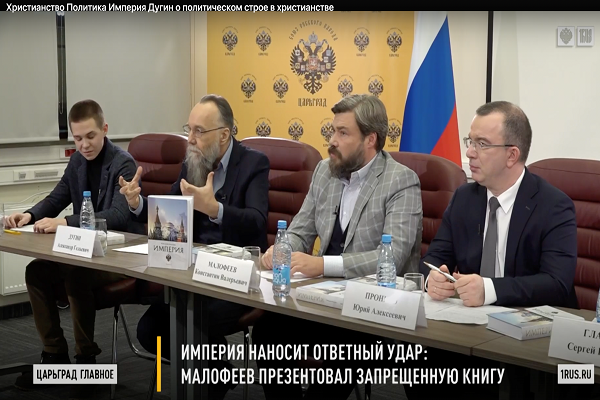 In his “geopolitical analysis” published on March 10, Dugin emphasized that “according to the laws of geopolitics,” Russia (“Eurasia”) without Ukraine is not an empire and civilization. Before the start of the “special operation,” Dugin declared Ukraine a “failed state,” announcing that the Ukrainians would pay a huge price for choosing to be “lackeys of the West.” Such implicit threats from Dugin are not uncommon if we recall his explicit extremist statements from 2014, later removed from YouTube on the grounds of constituting hate speech.

After the start of the “special operation” on February 24, the Russian imperialist Dugin began to preach another story, claiming “Ukrainians have been and always will be our brothers and sisters,” that “Ukrainians are not enemies, they are our people” and that “Ukrainian brothers” were tragically mistaken as a result of Western propaganda.

But how does he attempt to justify Russian “civilizational” attacks on civilian targets and on Ukrainians as a separate nation? According to Dugin, Ukrainians are part of the “three-sided East Slavic people,” and “were convinced that they were part of the Western (global) world” and that “the Russians are not brothers, but fierce enemies.”

Playing the role of a ‘prophet,’ Dugin struggles to justify imperialist Putin as a fighter “not against Ukraine, but for Ukraine”.

Dugin's Eurasian mission in Macedonia and its followers

In 2018, a small, marginal party led by Janko Bačev, named NDM (People’s Movement of Macedonia) was renamed United Macedonia (modelled on Putin's United Russia). The newly branded party organized a panel discussion on key political goals entitled “The Republic of Macedonia in strategic alliance with Russia and membership in the Eurasian Economic Union.”

The local headquarters of the United Macedonia political party in Ohrid, North Macedonia, July 25, 2020, featuring flags of Russia, the old Macedonian flag and the party flag. Photo by Truthmeter.mk, used with permission.

While a number of Western media have noted that many Kremlin policies are in line with Dugin's philosophy, and many have claimed that his work was admired by Putin or served as inspiration for imperial aggression, those writing about a direct link between Putin and Dugin as his councilor have admitted it's rumored rather than confirmed.

Dugin's key propaganda theses were that “the EU is slowly falling apart” and “the West is falling apart” (“You do not need the EU; it will fall apart“), and “Russia is open as a Eurasian alliance.” Dugin's message — “If you are in the Russian Federation we will be a common Slavic world” — was followed by a statement that Russia was not against the West: “We do not oppose the West, we want a good understanding with all nations, including European nations.”

From today's perspective, Dugin's unbelievable stories from Skopje that Russia did not oppose the West were denied by Dugin himself, as were his unreliable descriptions of Russia as a “demonized” country. Contrary to Dugin’s propaganda rhetoric during the previous years, in 2022 he continues to use demonization of its opponents to justify Russia as an empire that is not at war with Ukraine, but with the West and the “Antichrist” – who supposedly had hellish plans to destroy humanity and turn humans into robots and mutants.

With political propagandists and prophets like Aleksandr Dugin, Putin’s Russia is not a “demonized country” but a country that demonizes and satanizes in an attempt to justify its unjustified aggression against Ukraine 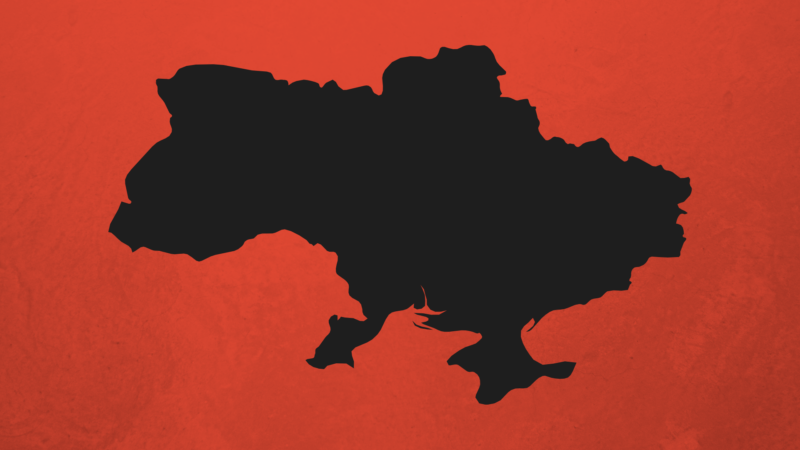