More than 143 journalists have been arrested since the 2021 coup 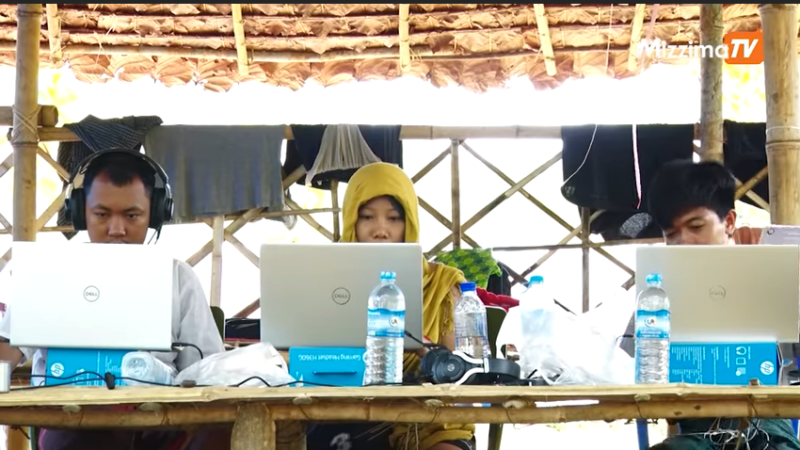 Mizzima News reporters working in a remote location. Screenshot from a YouTube video of Mizzima News

Journalists based in Myanmar are facing extreme risks in carrying out their work as the military government continues to detain individuals accused of providing information and support to opposition forces.

Since the February 2021 coup, at least 143 journalists have been arrested, with the majority of them charged with spreading disinformation about the junta. Around 82 were released after being granted amnesty, but 58 are still in military custody, according to the monitoring of the Institute for Strategy and Policy-Myanmar.

Global Voices has previously reported about the prison experience of journalists and the hardships faced by the independent media, foreign correspondents, and those forced to escape the country.

Despite the risks they endure, journalists continue to report from the frontlines as they provide the world with the most credible information about what’s happening on the ground in Myanmar. Anonymous journalists have even bagged global awards for their work in Myanmar.

In an interview with Radio Free Asia (RFA), a news website subsidized by the United States government, photojournalist Ta Mwe (pseudonym) shared the extra precautions journalists must take when covering events in Myanmar:

When we cover news activities on the ground, we first need to find a route to flee from the scene and escape arrest, before we start doing anything like taking photos or interviewing people. As I have covered flash mob protests in Yangon, I have planned carefully which streets to run away on as soon as I finish taking photos. It has become very challenging. When I grab a taxi on my way back from the coverage, I don’t do it in the streets close to the scene. I walk a few blocks to hide the traces of my identity before I take a taxi.

RFA also interviewed an editor from the Shwe Phi Myay News Agency in the Shan region who pointed out the dangers of journalists getting arrested and being caught in the crossfire between junta troops and ethnic armed groups:

We know that once a person is arrested, it is very difficult for them to be released. At worst, they could be arrested, tortured or even killed.

It’s not just the army in this area. There are many ethnic armed groups too. And so, we could get arrested and detained at any time and face a life-threatening situation.

After the coup, the junta revoked the licenses of more than a dozen independent media groups, which forced many journalists to seek other kinds of work. Local news outlets increasingly relied on the work of citizen journalists (CJs) to continue their coverage. Mizzima, an independent news group, acknowledged the important role of CJs in providing information to the public:

Myanmar independent media respect the work of their “sources” in the field – CJs who provide a range of stories and input that help paint a picture of what is happening in crisis-hit Myanmar.

We owe the CJs a debt of gratitude. It is no exaggeration to say – given the experiences of those who have fallen foul of the Myanmar authorities – that many CJs face death, injury or imprisonment in their efforts to get the story out.

Since the time of the previous civilian government, it was hard to be a reporter without a journalist identification card. When I go to a place where I am not known, I, a journalist, get inspected and asked questions [because the sources did not trust him].

For a journalist who has to put his life on the line at work, Htet Paing is also facing the difficulty of not earning enough from being a freelance reporter. Because he is not a staff reporter, his status is insecure. And, due to the current circumstances, he has to work secretly in the country.

Even those forced to go into exile face the threat of being deported if they are caught violating their visa restrictions. This was revealed by a Kachin News Group editor in an interview with Al Jazeera English.

In response to the coup, some initiatives were launched to support freelance journalists and artists, like the anonymous collective Visual Rebellion Myanmar. It recently paid tribute to journalists during the World Press Freedom Day on May 3:

On #worldpressfreedomday we honor the Burmese journalists which were hunted down, arrested, tortured and killed by the military regime since the coup d'Etat on February 1st, 2021.

Many journalists have gone into hiding or fled abroad with no legal or financial support and only pro-military publications can now work openly in the country. We are dedicated to help our team of journalists stay safe and continue to report on #WhatsHappeningInMyanmar as the country is engulfed in a large-scale conflict and people need reliable information more than ever.

The National Unity Government, which is opposing the junta, also recognized the sacrifice of journalists in exposing the lies of the military:

Despite the intense pressure and persecution from the military, professional and citizen journalists and media organizations have stood fast to preserve media freedom and the free flow of information, even at risk of their own lives. It is due to such brave work that the SAC [junta government] is losing the media war. Truth will (come) out, and the courageous men and women of Myanmar's media community are pushing back against the military propaganda and lies.