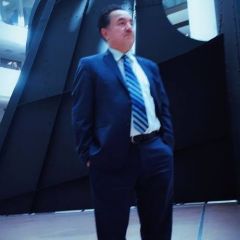 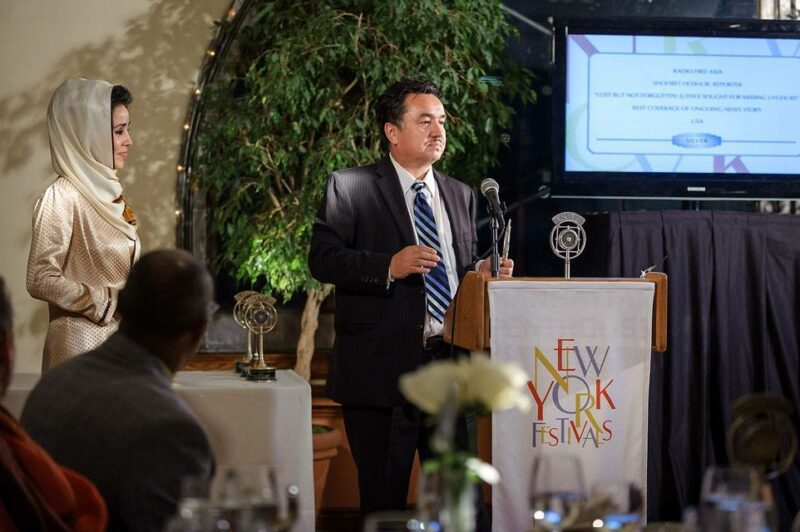 Shohret Hoshur speaks at a New York Festivals event in 2013 where he received a medal for a story published in 2012 on Radio Free Asia, entitled ‘Hear the Children Cry Freedom.’ Photo provided by the author, used withpermission.

In May 2022, on the eve of the visit of a United Nations delegation led by Michelle Bachelet, U.N. High Commissioner for Human Rights, to Xinjiang, the autonomous region in the northwest of China, an Uyghur-American journalist Shohret Hoshur urged us to publish his open letter to the head of the UN delegation. As this is the first ever visit of a human rights commissioner to China for the past 17 years, all eyes are on her amid allegations of serious human rights violations, genocide and crimes against humanity against Uyghurs and other Muslim minority groups in Xinjiang.

As is evident from Mr. Hoshur’s letter, 11 members of his immediate family have either been arrested, detained or there is no information about their whereabouts — a common story for many Uygur and other Muslim families in Xinjiang. He appeals to Ms. Bachelet for justice, transparency, and resoluteness, just like many human rights organizations urge her to adhere to principles:

My brother, Shawket Hoshur, had a recurring dream during his first detention in Urumchi, the capital city of “Xinjiang” Uyghur Autonomous Region: “I was always dreaming that a group of foreigners stepped into our cell and asked, ‘Are you the brother of Shohret Hoshur, the Uyghur-American journalist?’”

He told my mother, Tuhan Musa, about this dream on December 31, 2015, when he was released from detention as a result of the US government’s involvement in his case. He has been in detention again since September 2017, along with 11 other members of my family. I believe that my relatives have all had the same dream over the past five years. Unfortunately, my 82-year-old mother is now among them. They dreamed of this because they knew they were jailed because of my job with Radio Free Asia (RFA) in the USA. They expected that the USA and the United Nations would help them get released, but so far, they have not. I hope your visit could at least make my mother’s dream of release come true. 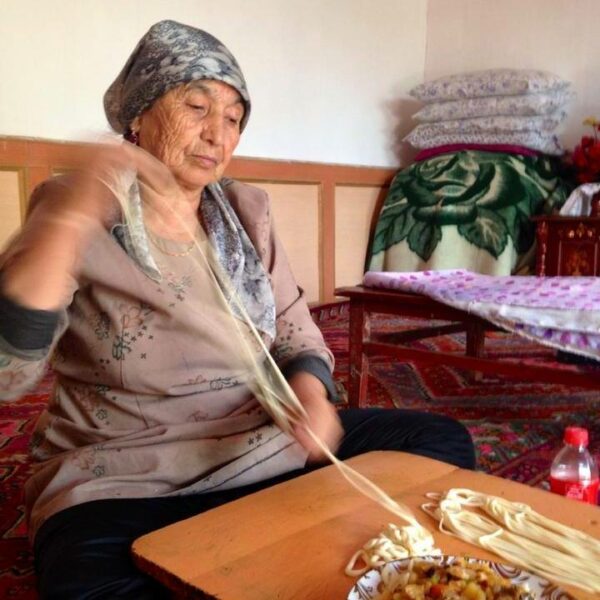 As a result of one intervention by the US government, in January 2016, my mother was allowed to keep in touch with me by phone as long as she did not speak about anything other than family-related issues. I then began “legally” talking to my mother and was kept informed about the situation with my other relatives. I learned that in September and October 2017, my elder brother, Shawket, and my youngest brother, Rahim, were detained again and taken to a so-called “vocational training center.” My mother said they were selected for “education” because of a telephone call I had made to Ghulja (Yining) County. When I asked how she learned about that, she said: “I was warned, ‘more troubles will come if your son in the USA does not stop instigating trouble’.” 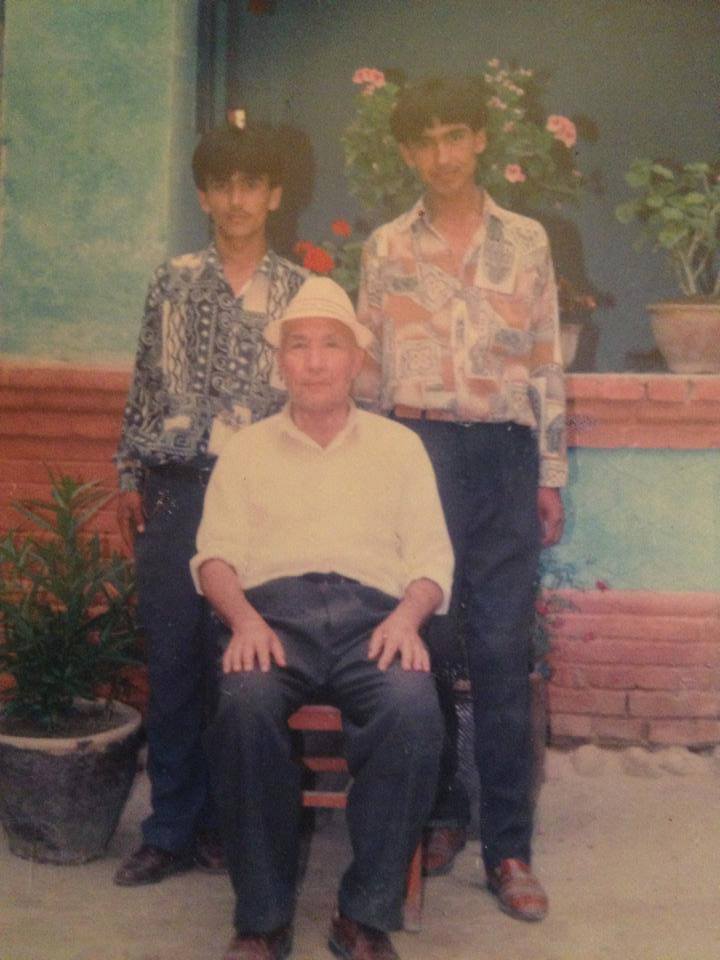 Father, Hoshur and brothers of Shohret Hoshur, Tudaxun and Rexim. Photo provided by the author, used with permission.

I had called the officials in Ghulja County in August 2017 and exposed the county’s fourth reeducation center. That was the first clear and detailed information reported about one of the mass detention camps, including its location, name, the number of students, and the students’ so-called “crimes.” My mother later informed me that my two nephews and two brothers-in-law were taken to the training center between January and March 2018. When I last spoke to my mother in April 2018, my detained relatives numbered 11, and she said: “Now, it seems I will be the next one to be taken because they said, ‘You crossed the line when you spoke with Shohret’; please don’t call me for two months.”

The week before, my mother had said: “I cried a lot last time (when my two brothers were detained). This year, even though 10 people from my family have been taken, I didn’t cry much because this time it was happening to all the families in our neighborhood. I feel that sharing the same problem with others gives you comfort.” Her statement about the neighborhood may have been considered by officials as “crossing the line” and leaking a state secret. When I called my mother two months later, her grandchild picked up the phone and said that my mother had been summoned by the police the week before and had never come back since. 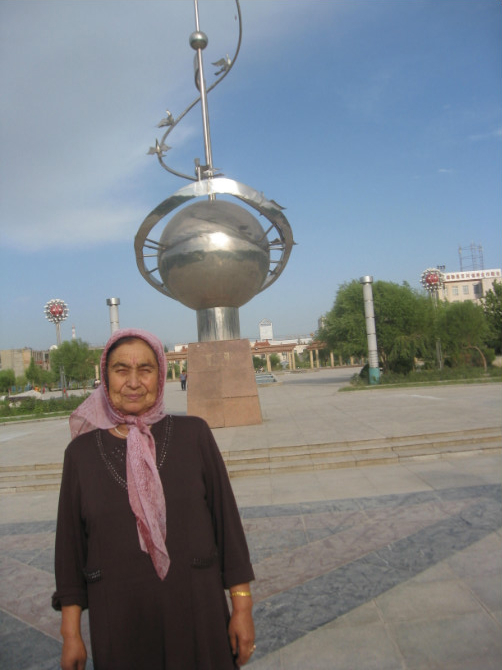 Thus, 11 members of my family are missing, and no one’s fate has been determined. I have been reporting on this situation with my family to the US State Department since the end of 2017, and I have asked China to provide information about my relatives, but I have received no response from either entity.

In the summer of 2021, I heard that my mother had been sentenced to eight years in prison at the end of 2018 for leaking state secrets and obstructing the legal process. My letter to the Chinese embassy in Washington to confirm my mother’s charges has gone unanswered.

A week ago, I called some residents of our hometown in Korgas County, to inquire about my mother’s whereabouts. One of the residents said that the house where my mother lived had not been cleared of snow for several years, which reflects the absence of any adults in our family.

I firmly believe that all my missing relatives were jailed as retaliation for my journalism work with RFA. My mother is 82, my eldest brother is 62, and my younger brothers, Tudahun and Rehim, have health issues (stomach and lung, respectively). Thus, I am extremely worried about their health status. I urge UN staff to help get information on whether my 11 relatives are alive and, if so, where are they and why and how they were punished. I believe that investigating their fate could help the UN team gain a clearer understanding of the Uyghur situation. China cannot deny that my relatives are captives; all information about their detention should be publicly available in the international media. Additionally, my relatives may have the courage to tell the truth because they have benefited from the results of a foreign investigation in 2015. 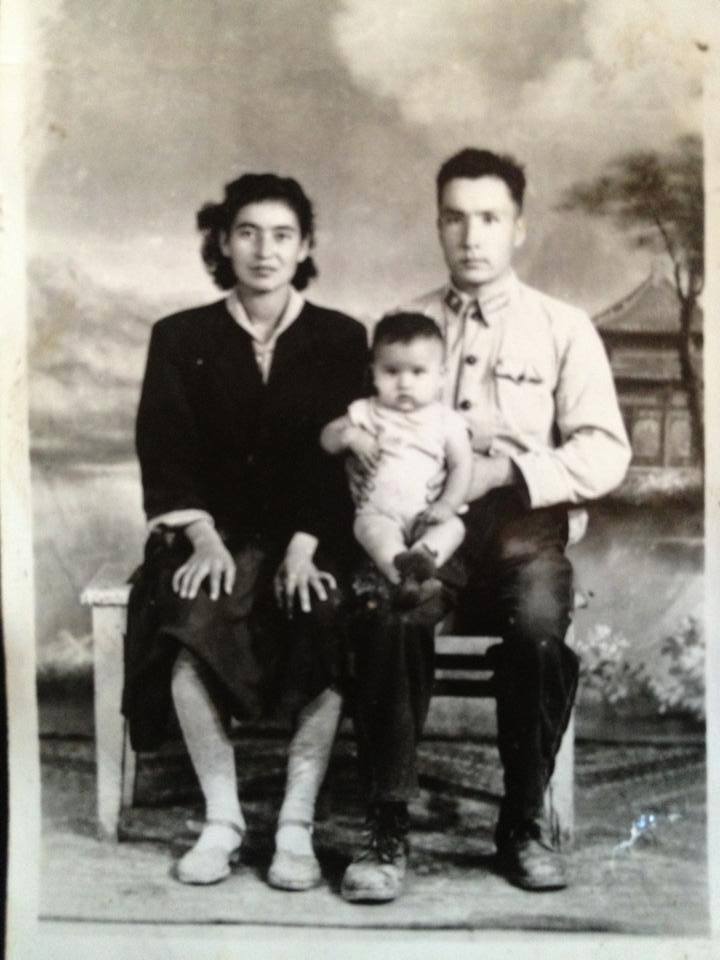 Shohret Hoshur's parents with his older brother, Shawket. Photo provided by the author, used with permission.

China is not only retaliating by punishing the relatives of an American journalist but also trying to erase all signs of hope for millions of people in the region, making them believe that the outside world does not care and is unwilling to help them. Therefore, I urge the UN investigation team to include all my relatives, or at the very least my mother (Tuhan Musa, 82), three siblings (Shawket, 62; Tudaxun, 48; and Rexim, 46), and ex-wife (Peridem Abdurusul) on the list of people who should be released from camps in China.

In 2002, my ex-wife, Peridem Abdurusul, and our two children were held at Shanghai International Airport while traveling to the US with immigration documents for the family unit. They were unable to obtain passports because of my articles published in Uyghur publications overseas. In 2009, Chinese state-owned broadcaster CCTV called me a provocateur for the July 5th Urumchi Incident because of my reporting. Just this year, I was called a liar by China’s spokesperson Zhao Lijian over my testimony at the Uyghur Tribunal.

I know that China will not forgive me or end the retaliation against my family, but I hope that your experience and the high-level international team that you lead, along with the meaningful investigation you have proposed, could help end my family members’ years of undeserved punishment.

Freedom of Speech  2 weeks ago
END_OF_DOCUMENT_TOKEN_TO_BE_REPLACED