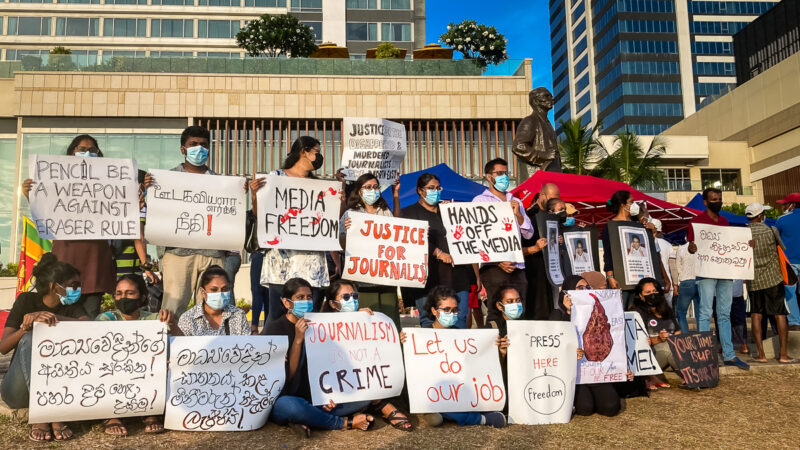 Sri Lankan journalists call for media freedom and accountability for killings and abductions of journalists at Galle Face Green protest site. Photo provided by the author, used with permission.

May 3 marks World Press Freedom Day. In Sri Lanka, the day dawned as the country continued to struggle with an economic crisis caused by years of mismanagement and bad policies, and escalating debt payments. This has already begun to impact media houses.

At least one publisher — Upali Newspapers Ltd — was forced to suspend the Saturday print editions of the English newspaper The Islander and the Sinhalese Divaina, because of a newsprint shortage. Others may have to follow suit. The chief operating officer of Liberty Publishers said that newsprint had already doubled in cost, from around USD 600–700 per metric tonne in 2021 to USD 1,200 per metric tonne as of March 2022. While Liberty hasn’t yet reduced the frequency of its three editions — the English language Morning daily, the Sinhala language Aruna and Tamil language Thamilan — it’s looking at streamlining.

Apart from rising costs, journalists covering the economic crisis and growing public protests around it have to prepare for the possibility of violence. On May 6, journalists were impacted by tear gas fired at a protest outside Sri Lanka's Parliament. Three days later on May 9, supporters of the Sri Lanka Podujana Peramuna party attacked peaceful protesters at Galle Face Green, with the police initially standing by and eventually using tear gas and water cannons. 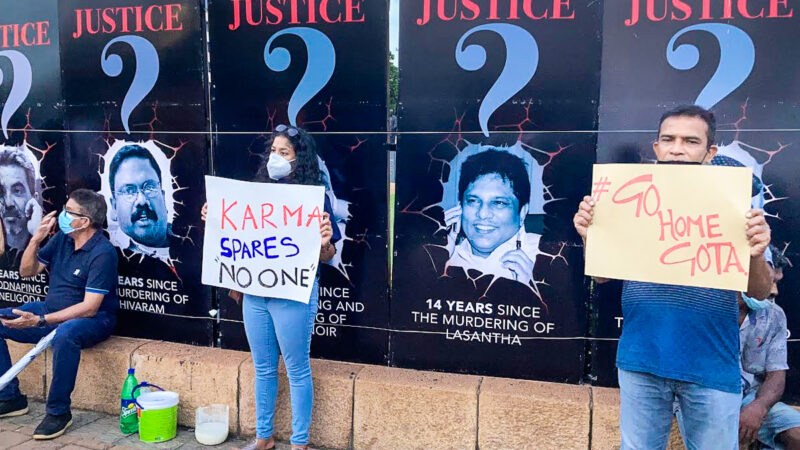 Protesters stand in front of posters of killed, tortured and abducted journalists put up in front of the Presidential Secretariat. Photo provided by the author, used with permission.

The same day, journalists were also caught up in tension outside Temple Trees, the official Prime Minister’s residence. On March 31, at least nine journalists were injured and six detained under Section 120 of the penal code while covering a protest outside President Gotabaya Rajapaksa’s residence in Mirihana. One was reportedly denied medical assistance at the police station, while cameras were also damaged.

Daily Mirror photographer Waruna Wanniarachchi, who was at Mirihana that day, said police personnel from Sri Lanka’s special task force hit him on the head with a baton when they emerged from the president’s house after a bus was set on fire. The next day, he was visited by officers from the Criminal Investigations Department who asked him to hand over his camera’s memory card to help them identify protesters. Wanniarachchi asked them to make an official request to his workplace, instead, as he had already handed over his equipment to his office. Another journalist, Tharindu Jayawardhana, the founder of Sinhala language news site MediaLK, said he received verbal threats from the president’s media division staff stationed outside Rajapaksa’s house, demanding he stop reporting. Jayawardhana later filed a complaint at the Mirihana police station. The police chief ordered an investigation into at least one private TV channel, NewsFirst, on April 1, in an effort to blame the unrest on the channel's coverage. 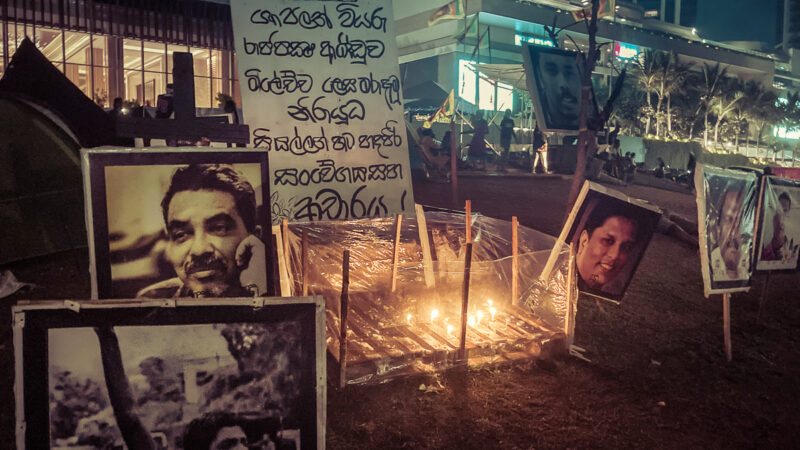 Days after a protester was shot dead by police in Rambukwella on April 19, a memorial dedicated to him features missing journalist Prageeth Eknaligoda, and killed journalists Lasantha Wickrematunge and Dharmeratnam Sivaram. Photo provided by the author, used with permission.

Many journalists in Sri Lanka learn safety practices on the go, as there is often a lack of resources for safety training programmes. Instead, senior journalists pass on tips. Equipment like gas masks and helmets for journalists going into volatile situations is in short supply, according to the founder of news website Colombo Gazette, Easwaran Rutnam.

The normalisation of social media blocks

Safety threats aside, journalists in Sri Lanka also have to adapt quickly to modes of communication being cut off, or being unable to report on the ground.

Just after midnight on April 3, the Telecommunications Regulatory Commission ordered mobile service providers to block several social media platforms — including Facebook, Twitter, WhatsApp, YouTube, TikTok, Telegram and Instagram — ahead of large protests planned against the economic crisis. The block, which lasted 15 hours, followed a curfew and a state of emergency imposed over the weekend. 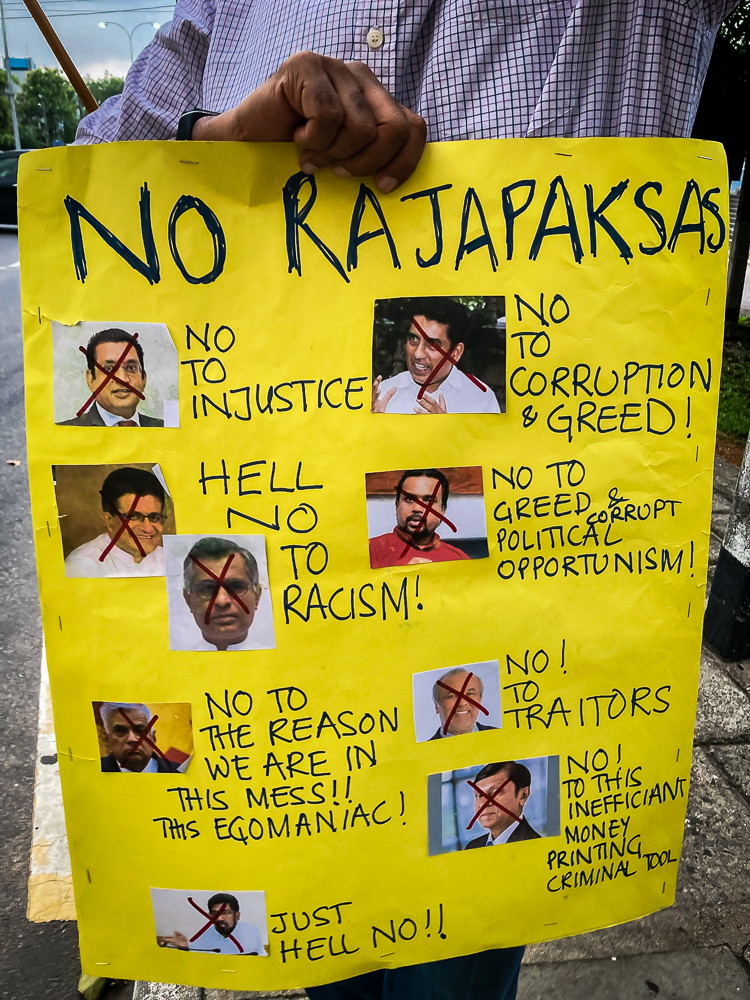 A protester holds up a poster condemning Sri Lanka's corrupt political culture. The poster features not just members of the ruling party but also members of the opposition. Photo provided by the author, used with permission.

Social media is a vital tool for disseminating information and news in Sri Lanka. Citizens have used social media to share their views on the economic crisis, using the hashtags #EconomicCrisisLK and #GoHomeRajapaksas. They also shared details on donation drives and safety practices while attending protests. Journalists, too, rely on social media to share their stories and identify story ideas. Rutnam said visits to his website, Colombo Gazette, were affected by the block. News websites like Colombo Gazette largely rely on social media for traffic to their site, and with fewer audience visits during the block, their revenue was impacted, he explained.

Government blocks on social media platforms during volatile situations have happened since at least 2018 when several platforms including Facebook, Instagram and WhatsApp were blocked during riots across the Kandy district targeting the minority Muslim community.

As a result, most journalists have become adept at using circumvention tools like VPNs — a move endorsed by former state minister for digital technology Namal Rajapaksa, the son of former president and current prime minister Mahinda Rajapaksa. He described the social media ban as “completely useless” because of the widespread use of VPNs.

Journalists’ social media posts are also leading to punitive action; at least one journalist from the state-run Sri Lanka Rupavahini Corporation has been suspended from work for social media posts on her own profile that were critical of the president. 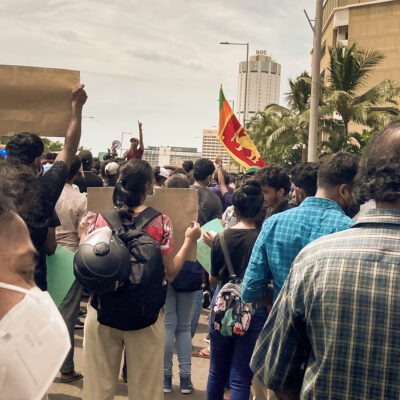 University students protest near the Presidential Secretariat on April 9. Photo provided by the author, used with permission.

Since around February 21, Sri Lanka has experienced power cuts that are due to dwindling fuel reserves. This makes it difficult for journalists to carry out their work, especially with often spotty connectivity on their mobile phones. (In a notice on their website, mobile service provider Dialog confirmed there might be interruptions in connectivity during long power cuts because of constraints in backup power systems.)

Yet Sri Lankan journalists continue to file reports. And increasingly, protesters also are telling their own stories. The documentation of attempted state repression via social media has contributed most to the longevity of protests connected to the economic crisis. The result thus far has been an explosion of memes, protest art, discussions and critical coverage of the crisis — despite emergency regulations passed by the president on May 6 which make sharing false information or information leading to public disorder or violence a criminal offence (a thinly veiled attempt at stifling criticism of the president). 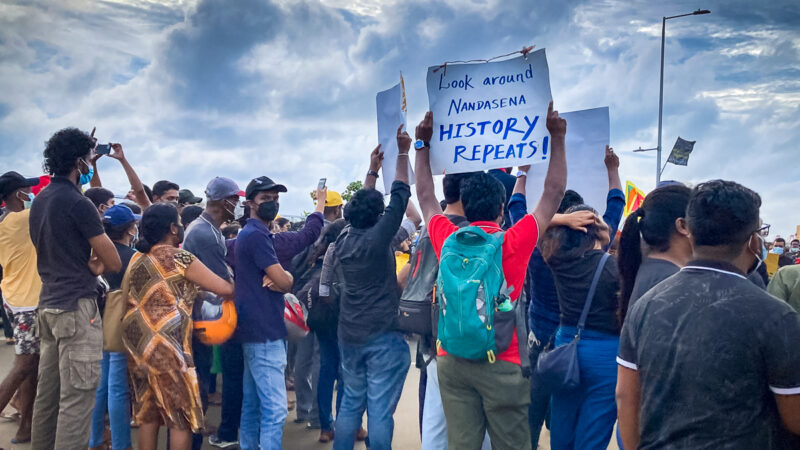 On May 9, Mahinda Rajapaksa stepped down as prime minister due to the protests, after vehicles and homes of Sri Lanka Podujana Peramuna (SLPP) or Sri Lanka People's Front ministers were set ablaze by angry protesters in retaliation for the SLPP-led attacks on May 9. With the profoundly unpopular Ranil Wickremesinghe being sworn in four days later amidst curfew, the protests look likely to continue.