Get a glimpse of the city's new censorship culture 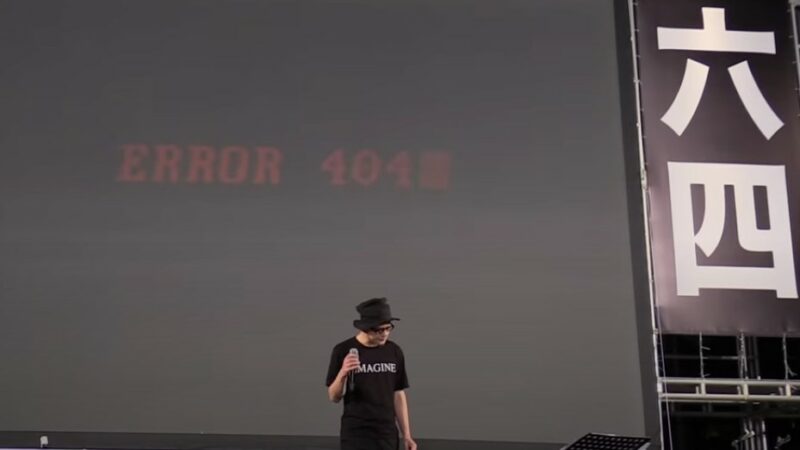 Anthony Wong performed the song “Memory is a Crime,” on June 4, 2019 for the candlelight vigil to commemorate the 30th anniversary of the Tiananmen Square Massacre at the Victoria Park. Image capture from inmediahk's YouTube channel.

Disc Jockeys (DJs) from Hong Kong's public broadcaster Radio Television Hong Kong (RTHK) were told earlier this year to stop playing the works of 10 popular singers and bands in their music programs on the radio station, according to sources from RTHK quoted by a number of local media outlets.

One source told Ming Pao that the list was delivered orally by a top-ranking official. While the sources did not explain further the reason for the censorship, most people believe that it is related to the artists’ political stands.

Though the censorship claim has not been verified, GV's readers can still develop a sense of the city's new censorship culture in the history of the local music industry by looking into the profiles and the songs of the 10 allegedly banned artists.

Anthony Wong Yiu-ming began his music career as the vocalist in an experimental Cantopop, Tat Ming Pairs, in 1985. His partner is Tats Lau, a composer.

The duo has a remarkable role in the local music history as it is the first pop band that has built its reputation on commenting on political and social happenings.

Former Chinese leader Deng Xiaoping put forward the agenda of Hong Kong's reunification of China in 1979, the roadmap for which was confirmed in 1982 after former British Prime Minister Margaret Thatcher’s China visit. As the majority of the city’s residents were mainland Chinese refugees or their offspring, the colony fell into a crisis of confidence.

Tat Ming Pair's first album was a response to the mixed sentiment of disappointment and frustration. For example, “Love of Daya Bay” (大亞灣之戀1985) is a critique of the Hong Kong–China joint venture in the construction of the Daya Bay nuclear plant.

The duo also produced two of the first songs in local music to discuss homosexuality: “Forbidden Colors” (禁色 1988) and “Forget He or She” （忘記他是她 1989). Anthony Wong publicly came out in April 2012, during the band’s 25th-anniversary concert.

Their 1990 album Nerves (神經) has songs interpreted as metaphors for Beijing's bloody crackdown on the student democracy movement in 1989. For example, many see the “Ten young firefighters” (十個救火的少年 1990) as an allegory of the 1989 student movement which ended with the tragic death of the courageous ones.

The duo separated between 1991 and paired up again in 2004. In May 2019, they released the song “Memory is a Crime” (回憶有罪) that Anthony Wong performed on June 4, 2019, at the candlelight vigil at Victoria Park to commemorate the 30th anniversary of the Tiananmen Square Massacre.

Unlike most popular singers, Anthony Wong does not hide his political stand. In 2014, he openly expressed support for the pro-democracy protests and he was banned from performing in mainland China. And in 2017, all of his music was removed from China’s streaming sites.

However, political sanctions have not deterred him from supporting the 2019–2020 pro-democracy protests. In August 2021, he was arrested by Hong Kong’s anti-graft body for his free performance in support of pro-democracy candidate Au Nok-hin during the 2018 Legislative Council by-elections. He was later released on probation for 24 months.

Denise Ho’s career started early at the age of 19 after she won the New Talent Singer Award in 1996. Ten years later, her career took off and she started speaking up in support of social outcasts. She started a charity fund in 2007 and released an album “Ten Days in the Madhouse” to raise public awareness of mental health issues. In December 2012, during the Hong Kong Pride Parade, she came out as gay.

The Hong Kong–born Canadian Cantonpop star has been a staunch supporter of the city’s pro-democracy movement and was arrested in 2014 during the police clearance of the protest campsite.

She became an independent artist in 2015, thanks to political sanctions from Beijing, and started using crowdfunding as a means to organize her concerts. Free from commercial constraints, she became more active in the city’s LGBTQ+ and democracy movements. Between 2019 and 2020, she presented Hong Kong’s political crisis and human rights condition at various international events.

She was arrested on December 29, 2021, and is currently still on bail for alleged conspiracy to print or distribute seditious materials due to her affiliation with the now-dissolved pro-democracy news site, Stand News.

Established in 2004, the Cantopop band has built its reputation by turning its pop songs into critical social commentary. For example, “The World Cup in Streets” (細街盃 2010) depicts the African community in Hong Kong and “Zyu Lung Heoi Si Bin” (豬籠墟事變 2012) criticises a property development project that would destroy a wet market at the centre of the city.

The band did not hide their support for the pro-democracy protests in 2014 and, in 2019, it released a new version of its old song “Sunrise” (天光了 2016, 2019) to express its support of the anti-extradition protests.

In January 2021, the band was elected as the Most Favorite Music Band 2020 in the annual Ultimate Song Chart Awards, and in 2022, its latest release “Ciao” won the Supreme Golden Song Award again. The song captures the emigration wave after the enactment of the National Security Law (NSL) in Hong Kong.

C AllStar, another boy band, was formed in 2009. The four vocalists met at a singing contest and started busking together in the streets. Their songs are characterized by a strong nostalgic feeling about the landscape, culture and spirit of Hong Kong. For example, their early works, “On Our Tram” (我們的電車上 2009) and “Don‘t let the island submerge” (別讓小島小沉 2012), are about the city’s vanishing culture.

However, in the middle of the 2019 anti-China extradition protests, the four vocalists decided to team up again. They released the song “You are not left alone” (沒有剩你一個 2019) to express solidarity with the protests:

The band relaunched in January 2021 and released “Those who stay behind” (留下來的人 2021) three months later. The song expressed their complex feelings toward the emigration wave since the enactment of the NSL and became a big hit.

Another boy band, Dear Jane, formed in 2003, has been sanctioned by Beijing since the release of the song Galactic Repairman (銀河修理員) in 2020.

The lyrics in the song talk about young people’s aspirations to fix a ruined world. A local school punished students for performing Galactic Repairman in a school singing contest. According to local news reports, the school had been warned by the Education Bureau that the song might violate the NSL. The song was later banned in China.

Charmaine Fong is a singer-songwriter and actor. She started her career early in 1999 after she joined a local music competition. Unlike other Cantopop singers, her market is not confined to Hong Kong but includes Chinese-speaking communities in Asia. Her first Mandarin album was released in Taiwan in 2002, and her first Cantopop album was released in 2006.

In 2019, she released several songs about the anti-extradition protests. The most popular one is “Speaking like a human” (人話), which explicitly criticises the violent crackdown and official discourses that covered up the truth about the protests. Fong was voted the most favourite female singer and “Speaking like a human” was voted the favourite song in the city’s Ultimate Song Chart Awards in 2020.

Serrini Leung is an indie music singer-songwriter. She began her music career in 2011 when she was still a student. She talks about sex and grassroots and youth cultures through her songs by depicting images from marginalized spaces and using Cantonese slang in her lyrics.

Serrini Leung is regarded as one of the most promising indie music singer-songwriters. She was attacked by mainland Chinese netizens after she mentioned the police siege of the Chinese University of Hong Kong during the anti-extradition protests when she received an award in the Taiwanese Golden Indie Music Award Ceremony in 2019. “G-bot” or “Internet security loopholes” (網絡安全隱患 2020) is one of her latest works:

Kay Tse is a Cantopop singer; she started her career in 2005 and has been crowned as “grassroots diva” as many of her songs have touched upon social issues. For example, the song “Wedding Card Street” (囍帖街 2008) is a critique of a property development project in Wanchai district. Her song “Eggs and Lambs” (雞蛋與羔羊 2014) addresses different kinds of domination (marriage, education, war) and hence was appropriated by pro-democracy protesters in 2014 as an expression of their discontent. The song was later censored in mainland China.

Alfred Hui became an actor and singer in the city’s biggest Television TVB in 2009 after he won the most popular singer in the broadcaster’s singing competition.

Some of his social media gestures during the 2019 anti-extradition protests have given the public an impression that he is critical of the government and the police crackdown. In 2020, he released a concept album “Negative,” whose title song “Feebleness” (無力感) became very popular as it captured the public sentiment after the legislation of the NSL. After his contract with a major album publisher expired, he established his record label, Alfrecords and became an independent singer.