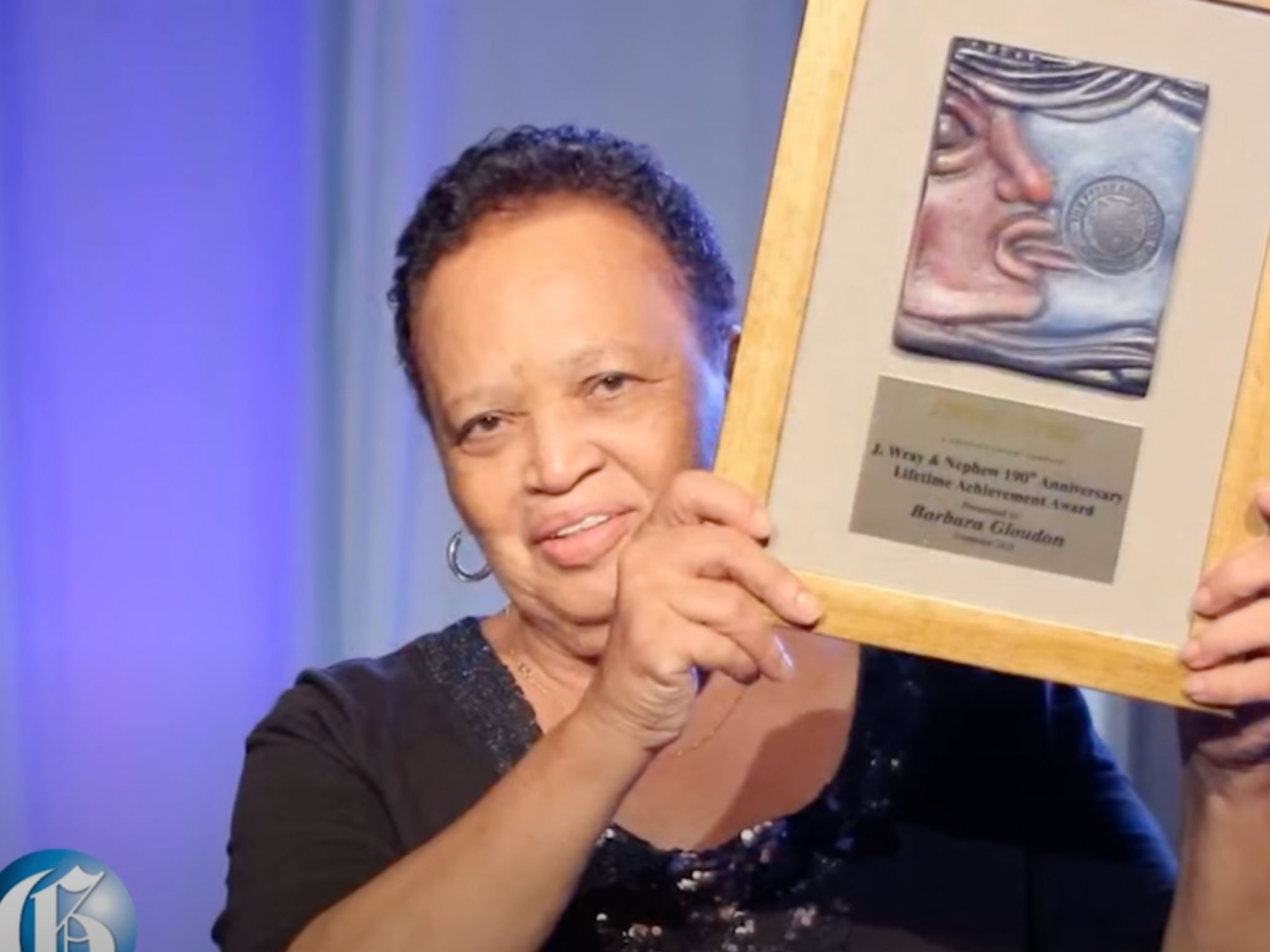 Barbara Gloudon, “a towering figure” in the Jamaican media and theatre world where she was affectionately known as “Miss G,” died in a Kingston hospital on the night of May 11. She was 87 years old and had reportedly been ailing for some time.

Her daughter, Anya Gloudon Nelson, said “Mom’s gone looking for her husband,” as her partner of 62 years, Trinidad-born actor, chemist and food technologist Ancile Gloudon, had passed away on April 30 at the age of 89.

Born Barbara Joy Goodison in 1935 to a family of nine children in the highland area of Malvern, St. Elizabeth, her father was a car mechanic and chauffeur. Her family relocated to the island's capital, Kingston, where she grew up, attending St. George’s Infant and Primary School and then St. Andrew High School for Girls. From an early age, she apparently had a dynamic personality. Her sister, Jamaica's poet laureate Lorna Goodison, commented in a recent interview that Gloudon was “an absolute star in our family — there's just no two ways about it.”

Starting as a junior reporter at the well-respected Jamaica Gleaner in 1953, Gloudon quickly established herself as a writer and columnist. As Radio Jamaica journalist Earl Moxam observed in his tribute, she wrote under the pseudonym “Kitty Kingston” for the newspaper's social pages, and did a social commentary column, “Stella Seh,” compiled in an Institute of Jamaica publication, which displayed her trademark wicked sense of humour and used Jamaican Patois for the first time in a newspaper.

The high standard of her work resulted in Gloudon being offered a special reporting assignment in the United Kingdom (UK); she also received a bronze Musgrave Medal from the Institute of Jamaica for her coverage of the Commonwealth Heads of Government Meeting (CHOGM) in Kingston in 1975, hosted by then prime minister Michael Manley, under whose administration she would serve for three years as director of the Jamaica Tourist Board. She also served as the first woman editor of the Star, the Gleaner's sister newspaper, which appeals to a mass market audience. Her considerable writing skills were later honed as a participant in the prestigious University of Iowa International Writer's Program in 1984.

In the early 1980s, Gloudon also took on the world of broadcasting, becoming a household name as the host of “Hotline,” an extremely popular radio call-in show on Radio Jamaica, which she anchored for close to 30 years, up until 2015. One of the show's current hosts, Emily Shields, tweeted her tribute to Gloudon:

I learnt a short while ago of the passing of former host of the Hotline, Barbara Gloudon. I receive the news of Mrs G passing with great sadness.

I took over fr Ms G on Hotline in 2015-all the time knowing she could never be replaced. She has made an indelible mark

Through her radio show, in particular, Gloudon developed a huge following, empathising with callers and delivering a mix of “rootsy” wisdom, laced with humour and social commentary. A devout Anglican, she also hosted a Sunday afternoon radio show, “Think on These Things,” for many years. The Anglican Church posted on Twitter:

Various colleagues tweeted their tributes, including veteran journalist Owen James and media personality Dahlia Harris, who paid homage to Gloudon on television the morning after her death:

As a journalist Barbara Gloudon displayed her versatility in Print, Radio and TV. Decades ago at the Gleaner she excelled in lifestyle journalism and was later Star Editor. May her soul rest in peace. #barbaragloudon

Condolences also poured in from both sides of the political aisle, from Prime Minister Andrew Holness and Opposition Leader Mark Golding:

I am deeply saddened by the passing of veteran broadcaster, journalist, & playwright, Barbara Gloudon. I grew up listening to Barbara Gloudon on the radio. She was known for her no-nonsense analysis and commentary.

Heartfelt condolences the the family/friends of Barbara Gloudon. A voice of compassion for most of our lives, she won a place in our hearts with her common sense & balanced reasoning. We have lost an iconic journalist, a mentor for many and an example for all. RIP, Ms Gloudon. https://t.co/W5X1O2y8Ds

Barbara Gloudon was outspoken and had a palpable sense of justice. Her courageous use of her voice and her platform demonstrated to our nation the leading role women can play in public life as champions for truth and as community builders.

Not only was Gloudon a skilled writer, broadcaster and journalist, she also played a significant role in the development of Jamaican theatre, in particular, the Little Theatre Movement founded in 1941, in which poet Louise Bennett-Coverly — the iconic “Miss Lou” — and husband Ranny Williams were pioneers.

She became a scriptwriter for the Little Theatre over decades, producing no fewer than 29 scripts for Jamaica's traditional annual pantomime, a topical musical comedy play performed for a season over the Christmas/New Year period. Her first pantomime was “Moonshine Anancy,” which referenced the first U.S. moon landing. The last of her scripts was 2018's “All Aboard the Windy Rush”, which examined the controversy over the Windrush Generation who migrated to the UK during the 1950s and 60s.

Gloudon was particularly proud of her work (with dramatist and director Brian Heap) on “Augus’ Mawnin,” a celebration and reflection on Emancipation Day through dance, music, poetry and dialogue, performed annually at the Little Theatre. Instituted in 1997, it became a staple on Jamaica's cultural calendar.

Jamaicans of all ages posted online tributes, with one young Jamaican tweeting about her memories of Gloudon's voice on the radio:

RIP Barbara Gloudon. I remember Grandma listening to her every waking day on the radio. Truly an impactful part of Jamaican history and culture. Walk good 🙏🏽

Deep condolences to the family and friends of the late Barbara Gloudon, our doyen of media, the RJR group, playwright, beautiful woman and matriarch of the Jamaican soil.😔
What a loss😔
Love and prayers 💕
Manners and respect 💕

Inducted into the Press Association of Jamaica‘s (PAJ) Hall of Fame in 2013, Gloudon received the Special Lifetime Achievement Award for her unparalleled service to journalism, having already been bestowed the Order of Distinction in 1975 and later, the Order Of Jamaica in 1992. In 2012, she received an Honorary Doctorate from the University of the West Indies.

In keeping with her introduction on “Hotline” – “We're not just talk; we're substance” — Gloudon was, indeed, a woman of substance whose contribution to Jamaica's cultural landscape was, as PAJ President George Davis put it, “multi-layered.” She will be greatly missed in several spheres.