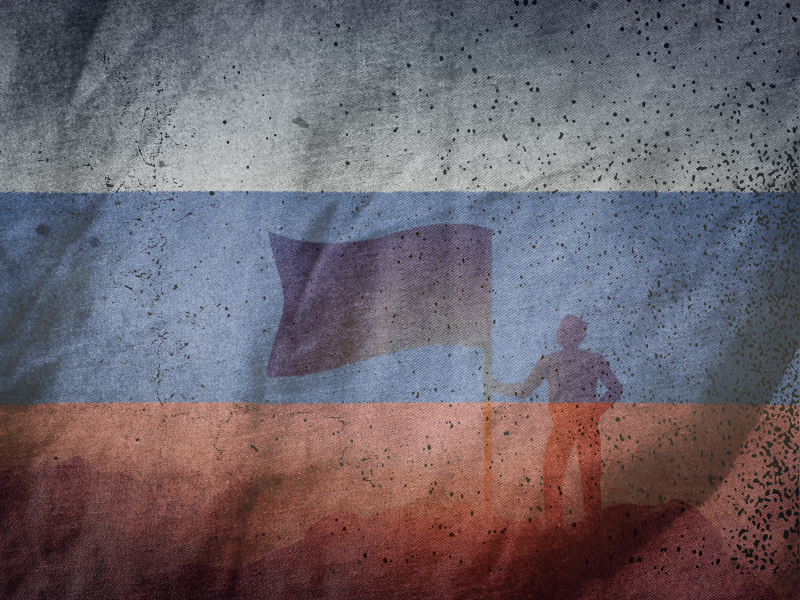 The war against Ukraine is entering its third month and pro-war, proud, and patriotic Russian influencers continue to overwhelm other voices on digital platforms in Russia. Some Russians dare to express deep shame over their state’s war against Ukraine, but if they reside in Russia, they risk their freedom and physical integrity. Emotions are running high on both ends of the spectrum.

There is little independent polling about Russian sentiments about the war, and what exists must be viewed skeptically in a country where any form of dissenting opinion is severely repressed. Social media platforms offer a window, albeit incomplete, into Russian narratives about the war in Ukraine.

Our researchers have dug deep into the publications of famous Russians to explain their perspectives.

1. “Russians should be proud of their nation and of themselves”

Russian pop music producer Yana Rudkovskaya published a patriotic image of her family in the early days of the invasion on Instagram. When Russia invaded Ukraine, Ukrainians flooded social media with messages that negatively portrayed Russians. Strong Russian patriotism was a popular counter-reaction online. (See more of the subtext and context of this post here). 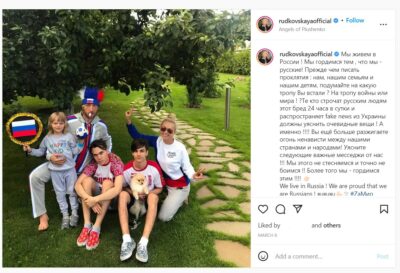 Since then, Rudkovskaya has not mentioned the war and instead, has showcased her lavish lifestyle. Russian rapper Timur Ildarovich Yunusov, known as Timati, shares similar content, ranging from patriotism (item analysis here) to luxury.

Former Duma Deputy and actress Maria Kozhevnikova has not stopped publishing Russian patriotic content. A few days after the military invasion, she stated that she is “not ashamed of being Russian” and hinted that the war had been instigated by the West (item analysis here). In late April, she published an image of school donations, presumably for Ukrainian children, stating that Russians are empathetic and compassionate. Our researchers write that although this post “is dedicated to a good cause, it lacks any reflection on why the aid is needed in the first place, and it whitewashes Russians” (item analysis here). Some go further, like “entrepreneur and motivational speaker” Polina Kitsenko, who has equated anti-Russian sentiment to “neo-fascism”. In her view, Russians are being persecuted (item analysis here). 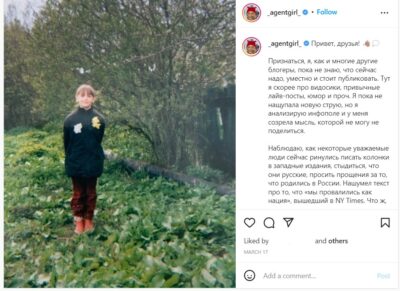 TV presenter and blogger Anastasia Vyacheslavovna Ivleeva, known as Nastya Ivleeva, changed her online discourse over time. To her audience of 19 million followers, she openly called on the Russian Federation to end the hostilities. A couple of weeks later, she asserted that Russians have nothing to be ashamed about in response to journalist Ilia Krasilshchik who wrote in a New York Times op-ed that “Russians failed” as a nation (item analysis here).

Notably, one of Ivleeva’s former business partners and close friends, Ukrainian travel vlogger Anton Ptushkin, has gone in the opposite direction and dedicated his entire content to war reportage.

2. “The Russian invasion of Ukraine is a source of shame for Russians” 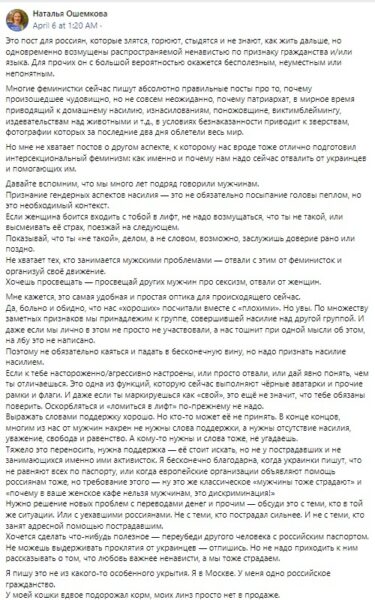 Russian human rights activist Maria Eismont claimed that the brutal war in Ukraine had been possible because of the Russian state’s suppression of free thought (item analysis here). Mitya Aleshkovskiy, a former director of a large charity, stated that all Russians bear personal responsibility for the war in Ukraine. After evidence emerged of Russian atrocities committed in the Ukrainian town of Bucha in early April, he wrote that the lack of historical reflection and destalinization has led to the war. He says that Russians decided to turn a blind eye to their past, resulting in war (item analysis here).

From a feminist perspective, psychologist Natalya Oshemkova wrote in early April that the Russian atrocities in Bucha are horrific but unsurprising, as feminists have been observing the brutal violence of Russian patriarchy within Russia for years (item analysis here). Oshemkova continues to write reflective posts on her Facebook profile about the war. 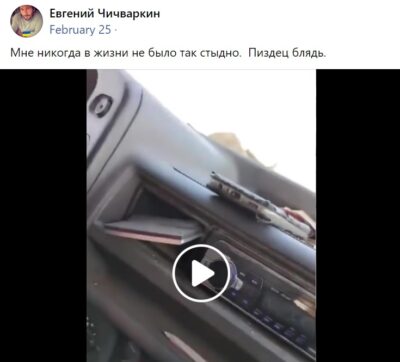 Businessman Evgeny Chichvarkin – who was considered Russia’s richest man under 35 for founding the largest Russian mobilephone store, “Euroset”, and currently in exile in London – has severely criticized the war. His first publication post-invasion states that “he’s never been so ashamed in his entire life” (item analysis here). He continuously publishes war-related posts on his Facebook profile.