At least 86 instances of attacks took place against journalists 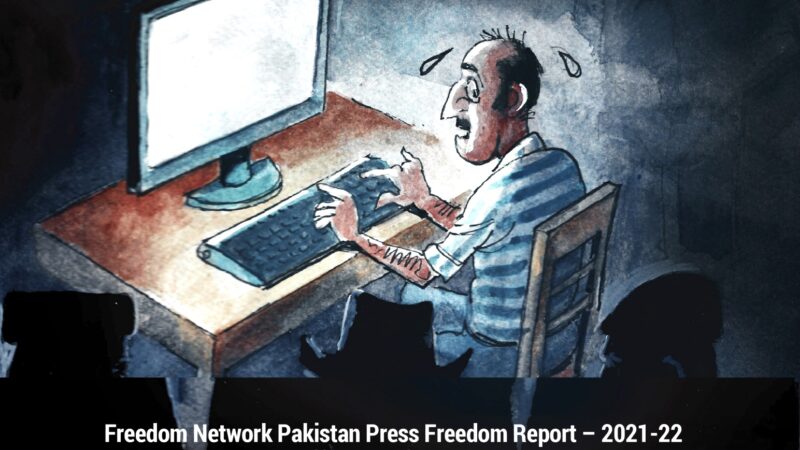 Screenshot of the cover page of the Freedom Network Annual State of Press Freedom Report 2021-22. Fair use.

On the occasion of World Press Freedom Day, Pakistan-based independent media and civil liberties organization Freedom Network released a report that revealed that journalists in Pakistan have been targeted mostly by state actors in the past one year (May 2021 to April 2022) during the now ousted Imran Khan government, resulting in violence, legal cases, abductions, detentions and threats. Pakistan also registered a steep decline of 12 points in the World Press Freedom Index 2022.

According to the report,

The report also mentions the highest number of attacks were carried out on the homes of journalists, while two journalists were killed.

The report also listed that state actors and functionaries targeted journalists in Pakistan the most — 35 cases. The most targeted medium was television (39 cases), followed by print media (35 cases).

A steep decline in the World Press Freedom Index

RSF press freedom index 2022 – how the countries of South Asia rank among major powers & the world:

Many on social media highlighted this decline in press freedom in Pakistan.

Pakistan, which was previously ranked 145 out of 180 countries, falls a further 12 places to 157 in the latest index.

It’s time to ask questions to @ImranKhanPTI when he came into power in 2018 Pakistan was ranked at 139 on World Press Index, Pakistan came down at 157 in 2022. Why Pakistan lost 18 points under his regime? Why was he declared a press freedom predator by @RSF_inter in 2021?

Pakistan fell 12 points on Press Freedom Index during last year of Imran Khan's govt & 18 points during his tenure. It not only earned him shameful title of “press freedom predator” but also placed our democracy in bad light. We are fully committed to freedom of press & speech!

The reports are contrary to what former Prime Minister Imran Khan said in his speeches regarding the free press. In one of his statements in September 2021 he said, “Media enjoyed ‘more freedom than ever’ under PTI's govt.” In another statement on March 1, 2022, he blamed a section of media that was critical of his policies for joining hands with the mafia, indirectly pointing towards the other political parties.

However, during the tenure of Imran Khan, female journalists were harassed, threatened and subjected to severe online abuse. In 2020 some female journalists also met the Chairman Pakistan Peoples Party and former Chairman National Assembly Standing Committee on Human Rights Bilawal Bhutto to record their complaint.

The restrictions Pakistan imposed on Balochistan include:
1. No int'l media is allowed to enter Balochistan
2. No foreign country, except Iran, is allowed to establish general consulate office in Balochistan's cities #Quetta #Gwadar #Turbat #Khuzdarhttps://t.co/fq3KBK8pXD

You can download the Pakistan Press Freedom report 2021-2022 by Freedom Network from here.