The real issue now is what is next? 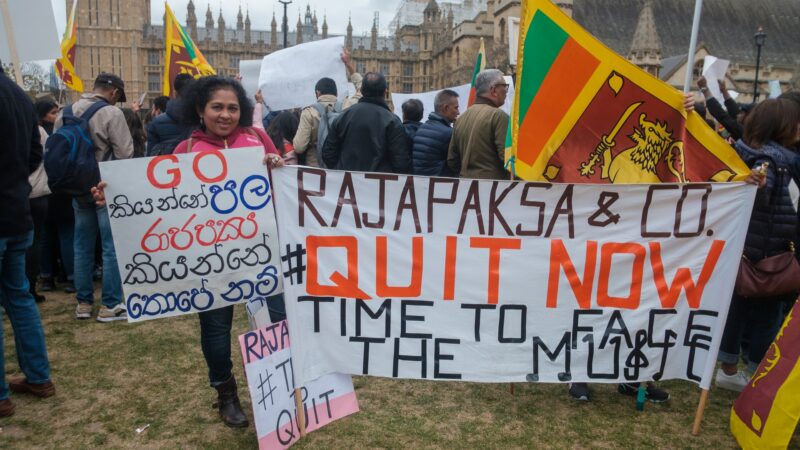 Sri Lankans in London protest aganist their President, Gotabaya Rajapaksa and Prime Minster, Mahinda Rajapaksa. Photo by Ehimetalor Akhere Unuabona on Unsplash. Free to use under the Unsplash License.

April and May 2022 will be remembered as the most important months in the post-independence era in Sri Lanka. During this short period, the much hoped for people’s awakening expressed itself powerfully. People who wielded authority failed to see the writing on the wall although the wall was just next to the Presidential Secretariat and everywhere in the country. Prime Minister Mahinda Rajapaksa thought he was merely seeing ghosts. President Gotabaya Rajapaksa believed in the comforting words of his friends despite knowing that the treasury was empty. The entire political establishment preferred to take shelter in a fool’s paradise.

Some of them rallied around Mahinda Rajapaksa on May 9 to try bullying tactics to suppress the protest movement. It misfired badly and the nation rose to defend the protesters and retaliate against violence. That brought the Rajapaksa era to an end although Gotabaya Rajapaksa nominally remains president. He is now an isolated person taking shelter.

The real issue now is what is next? It is only the people of Sri Lanka who can provide a workable answer to that question. Without their direct participation, no solution can emerge. The major issue is how to enable people to become agents of political and social change to resolve the ongoing economic crisis. That can happen only if the nationwide protest movement takes a further step towards achieving the goals they are fighting for by initiating a discourse on how to achieve system change. That they want the existing political leadership, which is unwilling and incapable of dealing with the heavy demands of the people, to go is quite clear.

There are several issues on which there is consensus among the people.

The law and law enforcement

There should be a review of the legislation and practices regarding failures of the corruption control system. It is essential to reveal to the people why this system has failed to achieve its objectives in such a dramatic manner, causing hardship and difficulties not only to individuals but also to the economic and political system. Legislative and institutional mechanisms can be developed to ensure methods to control corruption. There are many lessons to be learnt from other countries, and experts in the field may voluntarily help Sri Lanka.

Democracy and the rule of law

In all discourses that deal with solving the current economic crisis, people should be informed of the discussions; attempts at secrecy should be disallowed. People should be encouraged to participate in their localities and in their professional capacities to discuss ways to end the economic crisis and lay the foundation of principles and practices for dealing with matters of the economy. Local traditions and conventions should be built that would become part of social consciousness, as has happened in countries where there has been a genuine democratic change. People should be able to intervene in any interference to their economic system and wellbeing.

A just and equitable taxation system should be established as soon as possible. The affluent classes have resisted being subjected to a system of just taxation. When some attempts were made by previous governments, the propaganda machinery was unleashed and the governments were defeated. A decisive attempt should be made to develop and implement a taxation system where better-off income groups share the burdens of keeping a healthy economic life.

A clear agricultural policy should be developed in consultation with farmers, agricultural experts, economists and everyone who has a concern to ensure that food supply is not sabotaged by unnecessary imports and also to eliminate commissions when bringing imports. This is linked to strengthening the legal system.

The youth are now playing their role in political and social life. They are a new generation with a different understanding of society and with attitudes that were not possessed by past generations. Every attempt should be made to bring these younger elements into the public discourse. Respect for freedom of expression, association and assembly are essential when it comes to dealing with a societal crisis. When the younger generation is entering into public debates, they should be allowed to participate. This will cause a major shift in the political culture.

It is essential to preserve the right to education. In dealing with the economic crisis, no attempt should be made to deprive the rights enjoyed by youth for a better education, which will contribute to economic development and economic and political stability.

There should be no food or medicine shortages. The first priority is to ensure that a food crisis will not result because of measures taken to overcome the economic crisis. From now on, the government, as well as international humanitarian organizations, should assist Sri Lanka to avoid a catastrophic situation. There is already increased malnourishment as well as suicides related to hunger.

The misappropriation of national wealth by individuals should be a matter of the highest concern. Neither Sri Lankans abroad nor foreign investors will assist in overcoming the economic crisis if they think funds are being misappropriated. Many measures should be taken to deliver justice and fairness in all investigations and prosecutions and in ensuring that culprits will not escape. Whatever has been taken away illegally and deposited elsewhere should be properly investigated and the recoveries made. Many international organizations work on the issue of discovering wealth from stolen nations with greater cooperation among the nations.

The birth of a new social consciousness

This is the most agonizing experience many Sri Lankans have gone through. Such moments can shape the political consciousness of people. Nationwide protests are an indication that people are deeply concerned about their lives and the lives of their children. People are united in the cry to save the country from the economic and political crisis it is facing. This is when a deeper consensus emerges as to what people want to be and what kind of institutions their societies need. The people have a reason to show their resilience and to participate in a process to improve their prospects for the future.

Now the discourse should shift to pursue answers to these issues.