Another state of emergency with no credible justification provided 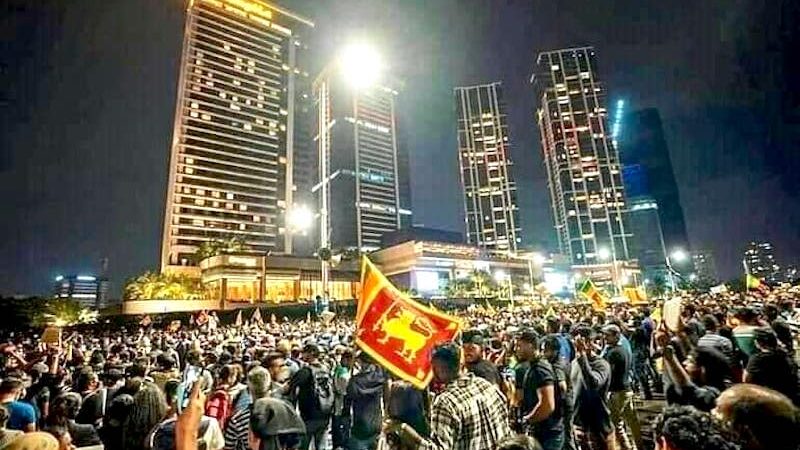 Sri Lankans protesting in front of the Presidential Secretariat in Colombo. Image via Wikimedia Commons by Surekha Samarasena. CC BY-SA 4.0.

This post by Savitri Hensman originally appeared in Groundviews, an award-winning citizen media website in Sri Lanka. An edited version is published here as part of a content-sharing agreement with Global Voices.

On May 6, 2022, the government of Gotabaya Rajapaksa declared another state of emergency in Sri Lanka amid ongoing protests including a general strike. This gives the government drastic powers to crack down on dissidents. The move and the attacks on protesters, have been widely condemned in Sri Lanka and internationally.

An emergency was declared in early April but allowed to lapse after widespread criticism. The president and his inner circle have made some efforts to win over the millions of Sri Lankans who are suffering terribly due to the mismanagement of the economy made worse by the threatened democracy. But the decree is a reminder of top politicians’ unwillingness to be held accountable by ordinary people and their readiness to respond through threats and violence.

Enforcing public insecurity, disorder and lack of supplies and services

Announced on May 6 under the Public Security Ordinance, emergency regulations were supposedly needed “in the interests of public security, the protection of public order and the maintenance of supplies and services essential to the life of the community.” This was ironic, since President Gotabaya Rajapaksa’s leadership has resulted in massive insecurity for the public and left many without food, utilities, healthcare or other essentials.

The safety and welfare of the country’s population were further endangered by the sometimes brutal response to demonstrators, who were treated to tear gas, water cannons and beatings. The situation would have been far worse if not for the impressive nonviolence of protestors, many of them young.

In a recent report, Amnesty International described how the Sri Lankan government, after inflicting severe hardship that violated people’s economic and social rights, also trampled on civil and political rights. In some instances where acts such as arson occurred, evidence pointed to the police or their associates as perpetrators. “The crisis in Sri Lanka is a prime example of the interdependence and interrelatedness between economic and social rights and civil-political rights, and as such, human rights must be at the heart of discussions on Sri Lanka’s economic future,” said the report.

Children and young people have been among those affected by the repression. “UNICEF is concerned with reports of violence during protests involving children. All actors must guarantee the right to peaceful assembly and freedom of expression, including for children,” according to a statement by the Sri Lanka office of the United Nations International Children’s Emergency Fund (UNICEF). In addition, the Child Protection Alliance wrote to the United Nations Resident Coordinator in Sri Lanka, Hanaa Singer-Hamdy, on “disturbing scenes of children injured by tear gas used to disperse unarmed protestors.”

However, the president’s response has been to take an even harder line. He now has access to sweeping powers including arresting and detaining critics, entering and searching premises, seizing property, overriding the law and using the armed forces alongside police to enforce his rule.

The reaction has been overwhelmingly negative. The Bar Association of Sri Lanka (BASL) argued that “a declaration of a state of emergency is not the answer to the present situation in the country, including the spate of public protests and strikes which have occurred,” and that this “must not be used to stifle peaceful protests and dissent or to make arbitrary arrests and detentions.” It called on the president to revoke the decision “and to ensure that the fundamental rights of the people such as the freedom of expression including the freedom of speech and publication and the freedom of peaceful assembly.”

“We urge the government to explain to the public the reasons for this proclamation since protests have been largely peaceful and within the ambit of normal police operations,” the Human Rights Commission of Sri Lanka said in a statement.

“This is the second time the President has declared another State of Emergency in the span of five weeks, with no credible justification provided, in a context when Sri Lanka has witnessed weeks-long peaceful protests across the island,” the Centre for Policy Alternatives (CPA) commented. The CPA pointed out that “The abuse of Emergency Powers to cater to the President's own insecurity is unconstitutional and undemocratic, and demonstrates a blatant disregard for the people and state of the country’s economy and stability.”

Hanaa Singer-Hamdy, the Resident Coordinator of the UN in Sri Lanka tweeted:

Limitations to the exercise of fundamental rights and freedoms are only acceptable when exceptional, proportional and justified. But Peaceful expression of dissent is not an emergency.Root causes for dissent must be tackled

Others who spoke out include the US ambassador, the British and Canadian high commissioners and the delegation of the European Union in Sri Lanka.

In a media statement, the Sri Lankan government tried to justify its actions. The move was needed “to ensure political stability which is a vital condition in overcoming the current socio-economic crisis in the country thereby assuring public safety and uninterrupted supply of essential services,” claimed the Director-General of the Department of Government Information.

He said, “Discussions have already been opened with the multi-lateral institutions led by the IMF and friendly countries to obtain financial assistance, and restructure outstanding debt, and the outcome of such discussions are positive. Political stability and peace in society are two major conditions that are demanded in building confidence and strength to make such programs a success.” Supposedly, “The State of Emergency was imposed as a short term measure of easing the crisis, and it will be lifted immediately after the normalcy returns on the island.” It is unlikely that many will be convinced.

What will happen next?

Some news stories suggest that Prime Minister Mahinda Rajapaksa may step down, although it seems improbable that this in itself would put an end to the protests. Another report claims that the opposition leader Sajith Premadasa has been invited to take the post, although he wishes to consult other parliamentarians before deciding. If the president remains in power, there may be widespread scepticism about any changes at the top.

Meanwhile, the risk looms of intensified repression using the new powers at President Rajapaksa’s disposal. On May 10, the Colombo Chief Magistrate is due to hear a request from police to have the Galle Face protestors removed.

If there are moves to use further violence in clamping down on the most high profile protests or demonstrations elsewhere, or to victimise critics of the regime, the government's credibility will be further undermined at home and abroad. Much remains uncertain.