The National Security Law and arrest of journalists impacted the score 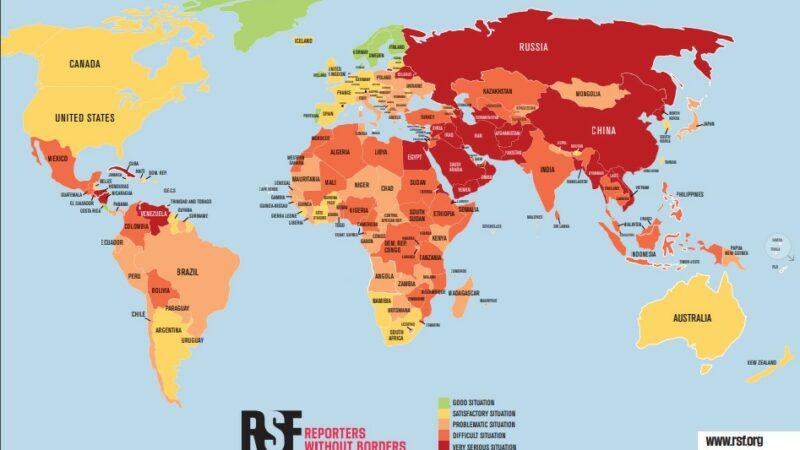 Hong Kong has registered the steepest fall in an international Press Freedom Index ever this year. The city was ranked 80th last year and dropped 68 places to 148th among 180 countries in 2022.

International watchdog, Reporters without Borders (RSF), has monitored press freedom across the world through its index for two decades. The 2022 index was released on May 3 — World Press Freedom Day.

In 2002, Hong Kong was ranked 18th — making it a beacon for free press in the world, especially in Asia — but press freedom has eroded significantly. In 2021, after the enactment of the National Security Law (NSL), it dropped to 80th, and it further slipped to 148th this year as the city’s security police forced two major independent news outlets, Apple Daily and Stand News, to shut down.

In two decades, press freedom in Hong Kong has fallen from the second-best “Satisfactory” to “Problematic” and this year to the second-worst “Difficult Situation” category, and for the first time lower than the Philippines (147th) and Singapore (139th).

RSF has adopted a new methodology in its 2022 index, which defines press freedom as

The effective possibility for journalists, as individuals and as groups, to select, produce and disseminate news and information in public interest, independent from political, economic, legal and social interference, and without threats to their physical and mental safety.

Hong Kong’s ranking has been dragged down by both legislative and security indicators, as shown in RSF ‘s region-based report. The international watchdog describes the NSL as:

A pretext to gag independent voices in the name of the fight against “terrorism”, “secession”, “subversion”, and “collusion with foreign forces.”

In addition to the NSL, the ex-colonial sedition law has been used as a legal tool to shut down Stand News.

As for the security indicator, RSF pointed out:

During the 2019 protests, hundreds of journalists were victims of police violence and were also detained and indicted. A new wave of arrests started in 2021, when a dozen journalists were detained for national security crimes.

According to the RSF barometer, among the 480 journalists and media workers currently in jail, 18 are from Hong Kong. Eight journalists and executive members of Apple Daily have been arrested, and seven have been charged with colluding with foreign forces under the NSL. Among them is the media outlet’s founder Jimmy Lai. As for Stand News, two former senior editors have been charged with conspiracy to publish seditious materials.

The RSF 2022 index report notes that press freedom has deteriorated dramatically in the Asia Pacific Region, which holds more than half of the world’s population, as a result of military conflicts and autocratic political systems that empower governments to take absolute control of information.

Among the 32 Asia Pacific countries, eight are in the category of “Very Serious Situation”, with North Korea (180th) ranked the worst globally, followed by Myanmar (176th) as the 2021 military coup has led to “an extremely harsh repression of journalists”. China (175th), Vietnam (174th), Bangladesh (162th), Laos (161th), and Pakistan (157th) continue to keep firm grips on media and information flow. Afghanistan (156th) also experienced a steep fall as reporters and news outlets became targets of intimidation after the Taliban seized power in August 2021.

At the international level, democracies are being weakened by the asymmetry between open societies and despotic regimes that control their media and online platforms while waging propaganda wars against democracies.