'We live in pirate’s waters' 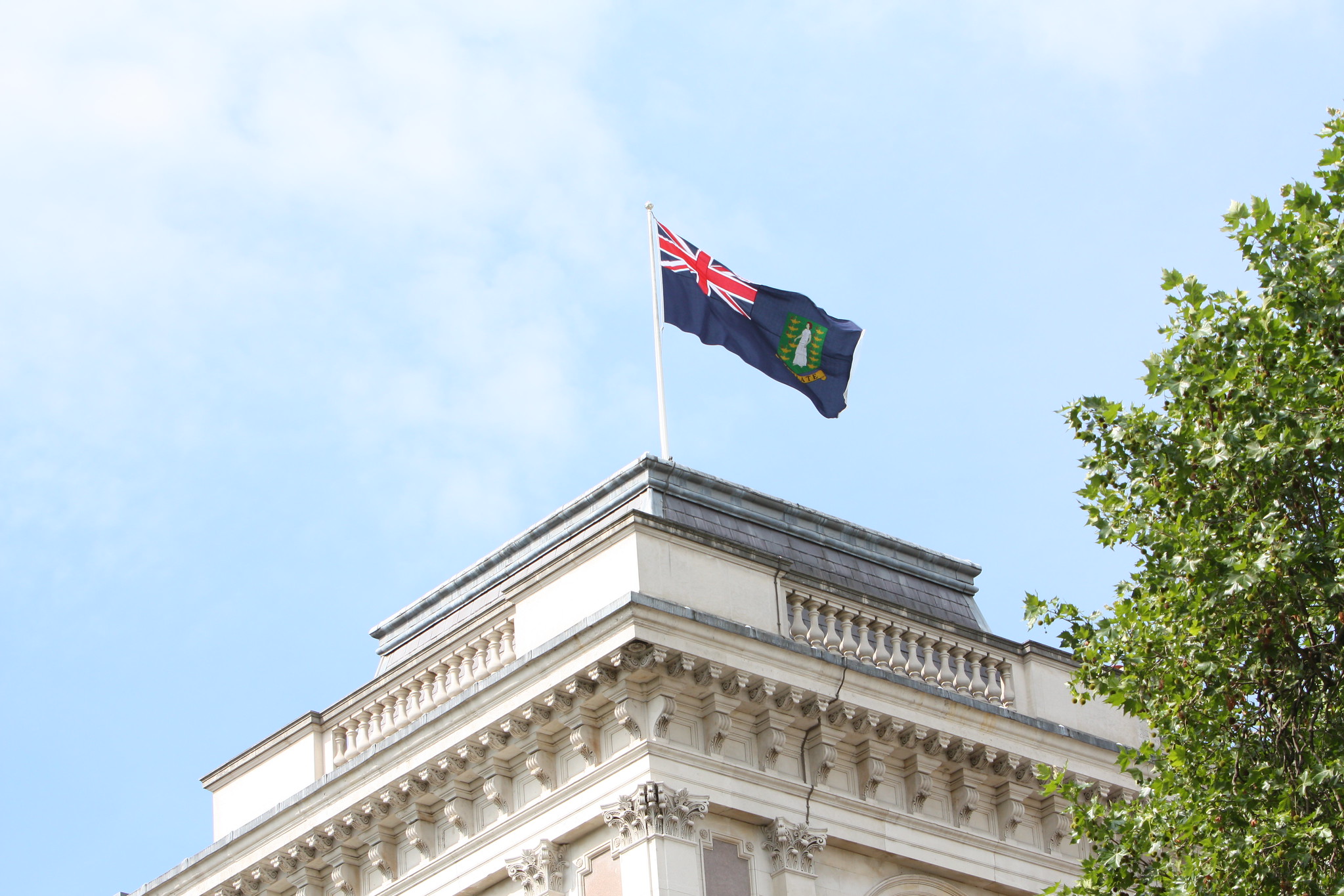 The flag of British Virgin Islands flies on the Foreign Office building in London, July 1,2014. Photo by Foreign, Commonwealth & Development Office on Flickr, CC BY 2.0.

The premier of the British Virgin Islands (BVI), Andrew Fahie, along with the director of the country's Port Authority, Oleanvine Maynard, were arrested on April 28 on alleged drug smuggling and money laundering charges during a United States Drug Enforcement Administration sting operation in Miami, Florida, in which officers pretended to be cocaine traffickers from Mexico's infamous Sinaloa drug cartel.

The duo were in Miami for a cruise convention; reports following the arrest suggest that Fahie agreed to grant the traffickers access to local ports in exchange for a bribe of 700,000 United States dollars.

The arrest was confirmed by the BVI's governor John Rankin, who called it “shocking”:

The Premier of the British Virgin Islands and the director of the territory’s ports were arrested on cocaine related charges in Miami today.

Governor of the British Virgin Islands, John Rankin, confirmed the arrest in a statement a short while ago.https://t.co/FnRaLJo5ON

Rankin quickly called an emergency Cabinet meeting to discuss the way forward for the British overseas territory. In the interim, Deputy Premier Natalio Wheatley will act as head of the BVI.

As for the US sting operation, the plot thickened when a third suspect — Kadeem Maynard, the port director's son — was also held in connection with the charges, which involve the attempt to smuggle in excess of five kilograms of cocaine into the United States, as well as conspiring to commit money laundering.

The UK's foreign secretary, Liz Truss, said she was “appalled” at the allegations, which she cited as proof of the importance of the BVI's recently concluded Commission of Inquiry regarding alleged mismanagement by the premier and his administration. The recommendations coming out of the Inquiry include partial suspension of the BVI's constitution, as well as direct rule by the UK for at least two years, an idea not favoured by the acting premier.

Social media users across the region reacted strongly to the news. One Twitter user asked:

My question is this. “Since the Premier is a diplomat, why was he arrested in the first place and why did it make the news?” Discipline should come after he is stripped of his Premiership or handled by the BVI. Maybe I’m wrong🤷🏾‍♂️

On Facebook, Susan Chaplin, who has lived in the BVI for the past 30 years and called the potential return of the BVI to British oversight “a blow to residents and workers who considered the BVI a democracy,” commented:

Looks like that sleepy, little, palm-tree-infested group of tropical islands (where everyone is kind and honest!) has a different face altogether.

On the comments thread, Benito Pinto responded that he was “not surprised”:

We live in pirate’s waters.
When that kind of trading takes place openly, some ‘governmental law enforcement’ involvement is in place.

Scans of the court document in which Fahie was referred to by the moniker “head coach,” soon began to make the rounds on social media. The document refers to alleged meetings with the DEA undercover agents by Fahie and the two Maynards. The document states that in one encounter, Fahie claimed “the British didn't pay him much,” prompting Facebook user Justin Andre Cardinal to weigh in:

This is why I always oppose cutting parliamentarians salaries. If you serious about getting rid of corruption you should pay folks based on their qualifications and similar to what they would get for the same role in the private sector. […] Not saying [it's] right to steal but paying a proper wage is very often a good deterrent.

Most netizens, however, were cringing with embarrassment:

#UK, get your #VirginIslands in order or the #USA will. What an embarrassment. #BVI #Fahie #AndrewFahie #Rankin #JohnRankin #LizTruss

Earl Hazel Jr. was both livid and intent on finding solutions:

When a public servant is arrested, they are interdicted, removed from the service and put on half pay
Why has there been no statement from the ruling party regarding the removal or suspension of Andrew Fahie's title of premier?

The news articles are having a field day addressing him as the current premier. It is doing more damage to the BVIs image [and] the ppl in charge just standing with their hands in their pockets looking dazed, instead of doing what they can to prevent the further tarnishing our reputation.

Stop waiting for Rankin to hold y'all hand […] Get all them bigly paid advisers and do what's necessary to save these Virgin Islands!

Plans for the sting operation reportedly began back in October 2021 after a DEA source met with alleged Lebanese Hezbollah members who said they had links to Florida. They were asked to facilitate the use of Tortola as a temporary storage port for cocaine bound for the US, as well as a potential location for money laundering. The Hezbollah group obliged by organising introductions to senior BVI government and port officials.

The arraignment of Fahie and Maynard is scheduled for May 13.