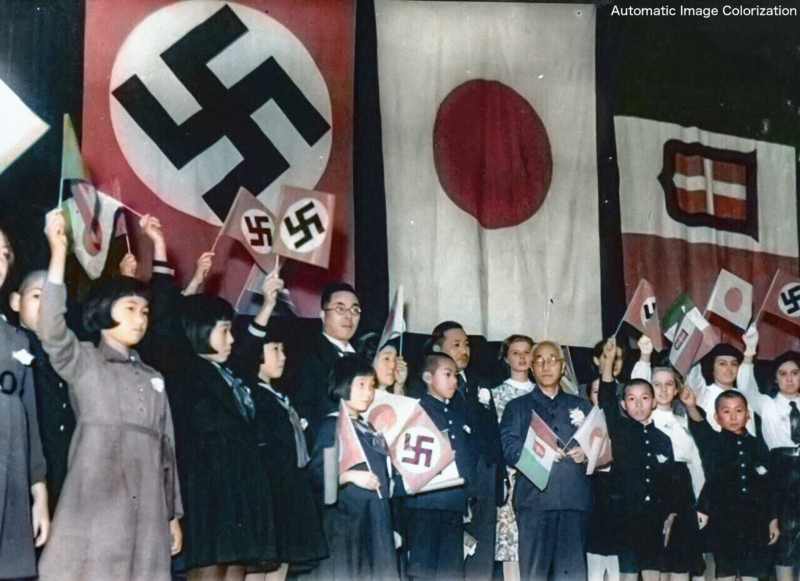 In April, the Ukrainian government issued a deletion, correction, and apology after sharing an image displaying a former Japanese emperor side by side with Adolf Hitler and Benito Mussolini as part of an official video entitled “Fascism and Nazism were defeated in 1945.” The incident showed how some people in Japan continue to be sensitive to the country's history as a wartime aggressor, and the determination of the Japanese government to wield its powerful position over Ukraine to impose a sanitized version of the past.

On April 1, about five weeks after being invaded by Russia, the Ukrainian government shared the video on its official Twitter account and condemned “contemporary ruscism,” (combining the words “Russia” and ‘racism”). The video included images of Germany's Adolf Hitler, Italy's Benito Mussolini, and Japan's Emperor Hirohito. The three countries are widely regarded as aggressor nations that started the Second World War. Japan had already launched a war with China in 1937, and would trigger a global war by attacking the United States, the United Kingdom, and other countries in December 1941.

Several weeks went by until Japanese netizens noticed the video, causing an uproar that led to condemnations by various far-right politicians in Japan, and then the Japanese government itself.

The Ukrainian government deleted the original tweet, issued a Twitter retraction that included the offending image, and then reshared the same video to Twitter, minus Emperor Hirohito.  Ukraine's ambassador to Japan, Sergiy Korsunsky, apologized on Twitter:

The [now deleted] image included a photograph of the [former] Emperor of Japan, who had nothing to do with the outbreak of war, and with Fascist ideology. The Japanese are [rightfully] very offended because it is not a fair [comparison], and does not correspond to historical facts. We urge [the creator of the video] to correct this. Japan is one of our greatest allies.

The criticism of the tweet was led by prominent politicians, such as Sato Masahisa, who chairs the foreign relations committee of  Japan's governing Liberal Democratic Party. In an April 24 tweet, Sato said:

As chair of the party's foreign affairs committee, I have requested that the European section of Japan's Ministry of Foreign Affairs immediately look into this issue.

The Japanese government, which has provided aid that includes “non-lethal military equipment” to Ukraine since the start of the Russian invasion, officially requested that the reference to Emperor Hirohito be removed from the video. The government of Ukraine quickly complied and posted an official apology on Twitter.

The Ukrainian government did not stop there, and went on to share a poem explicitly connected with Japanese nationalism and militarism:

Oh dear. The official acc't of the Ukrainian Embassy in Japan actually tweeted a poem that was famously read by Emp. Meiji shortly before the start of the Russo-Japanese War and later read by Emp. Showa in the lead-up to the Asia-Pacific War (apparently as part of their apology?) https://t.co/io1T2IT8UT

However, the Japanese government was not finished considering the issue. In response to a question posed by Sankei, a business daily with an ultraconservative editorial stance, one prominent official mused that “there is a deeply rooted misconception among the international community that [Imperial] Japan was a Nazi or totalitarian state.”

Reporter from @Sankei_news prefaces a leading question to Deputy Chief Cabinet Secretary Isozaki: “In light of this incident, I think we can say that there is a deeply rooted misconception among the international community that [Imperial] Japan was a Nazi or totalitarian state.” https://t.co/gwqNitpCMn

The Japanese government's protest is based on the historical belief that Emperor Hirohito, Japan's head of state at the start of World War II, should not be compared with totalitarian dictators such as Hitler and Mussolini.

There are a variety of popular historical narratives that either downplay or excuse Emperor Hirohito's culpability for the war. For example, one popular narrative explains that militarists from the army and navy had usurped power from Emperor Hirohito, and plunged Japan into war.

Hiromu Nagahara, an historian of modern Japan at MIT in the United States, disputes this perspective:

If a student of mine writes a paper that claims that by 1926 “the Japanese Army and Navy had already usurped the emperor's power,” I will assume that they did not do the readings nor paid any attention in class and grade them accordingly. Just saying.

This narrative, some pointed out, ignores the Triparite Pact, a defensive alliance Japan signed with Nazi Germany and fascist Italy on September 27, 1940. By that time, Germany and Italy had already launched a war of aggression in Europe.

The Tripartite Pact was signed on September 27, 1940 and consisted of Italy, Germany, and a mysterious third country whose name has been lost to history. pic.twitter.com/onoS8F6Ji0

While Japan's civilian prime minister Konoe Fumimaro, rather than the emperor, was Japan's signatory to the Pact, one prominent historian in Japan noted on Twitter:

I believe they should not have modified their video bc what JP did in WW2 resembles what Russ is doing now in Ukraine.

In its complaint to the Ukrainian government over the video, the Japanese government also disagreed that Japan was a fascist, totalitarian state. On Twitter, historians also debated this official historical perspective.

Amy Stanley, a social historian of early modern and modern Japan at Northwestern University in the United States, acknowledges that in the past there had been no consensus on whether or not wartime Japan, like its Tripartite allies Italy and Germany, was a fascist state, or even what an accurate definition of fascism could be.

In a detailed Twitter thread, Stanley argues, along with other historians, that the United States, which occupied Japan following World War II, had strategic reasons for downplaying Emperor Hirohito's role in leading Japan into the war.

In her Twitter thread, Stanley also argues that a variety of scholars and specialists now agree that wartime Japan was, indeed, a fascist state.

All this is to say, I agree with the new consensus that Japan was, in fact, fascist, and that it is appropriate to name Hirohito alongside Hitler and Mussolini as a fascist leader *even though the Japanese emperor played a different kind of leadership role*

Hannah Shepherd, an historian of modern Japan at Yale University in the United States said of the Japanese government's demands for a retraction from Ukraine:

It’s kind of fascinating but also disturbing to watch in real time Japanese officials pushing their version of the history of Japan’s imperialism and wartime behavior and people going along with them.

You can love Japan, and be proud to be Japanese, without defending this history of fascism. Just saying.