Incumbent Commonwealth secretary-general fires a shot across the bow of a rival Caribbean candidate, and the region is taking note

'Smug! As if the position is [...] preordained order of succession!' 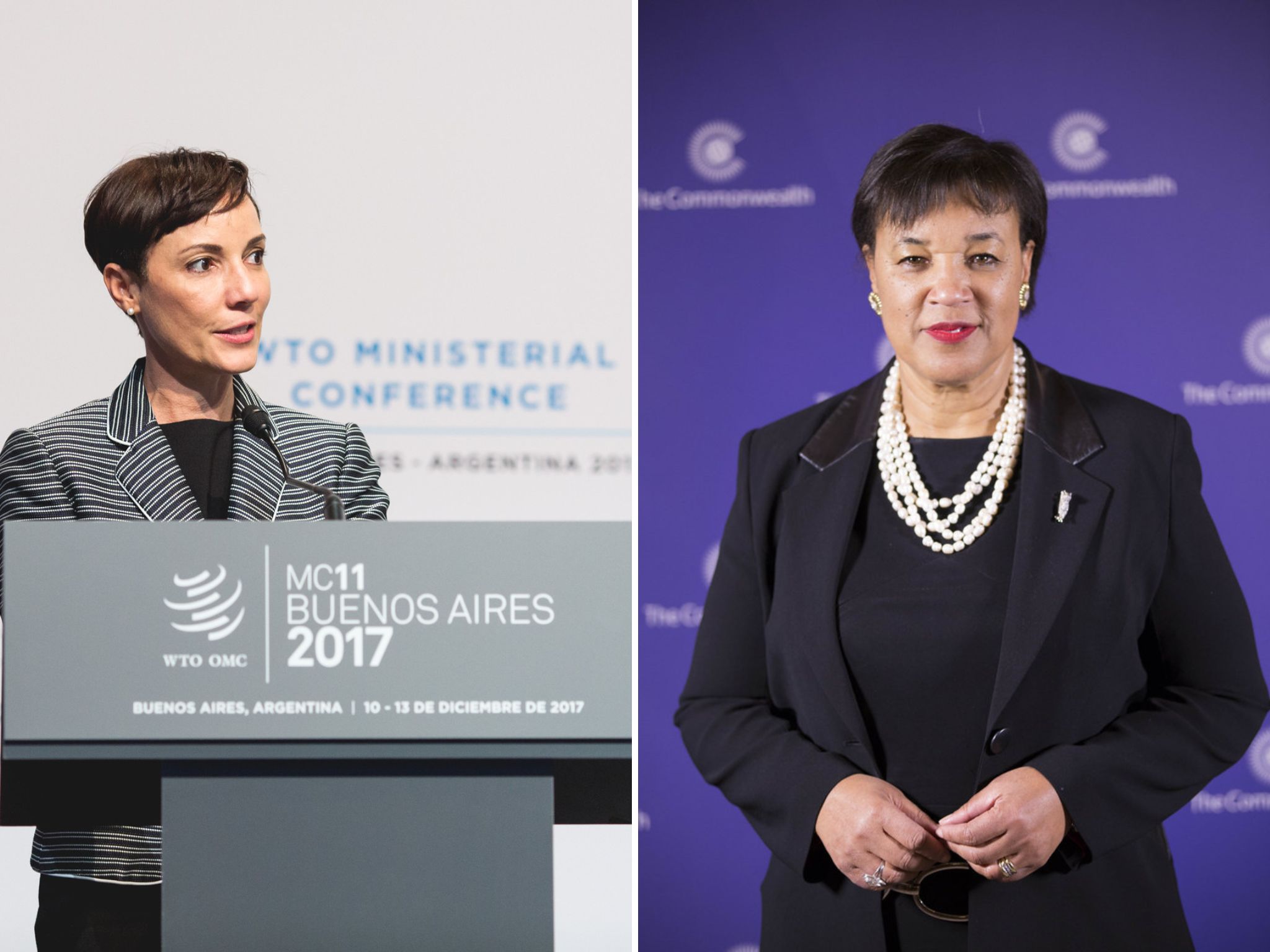 Caribbean netizens are becoming increasingly interested in the competition for the post of Commonwealth secretary-general, which has turned out to be a race between two women claiming the region: the incumbent, Patricia Scotland, who was born in Dominica and raised in the UK, and Jamaican politician Kamina Johnson Smith, whose decision to run has fanned discussion over whether there is a split within the Caribbean Community (CARICOM) over the issue.

The new Commonwealth head will be decided at the upcoming Commonwealth Heads of Government Meeting (CHOGM), which takes place in Kigali, Rwanda the week of June 20.

While the Jamaican government has consistently touted the qualifications of Senator Kamina Johnson Smith, the island’s Minister of Foreign Affairs and Foreign Trade, who officially launched her candidature for the post in London on April 21, the incumbent, Dominica-born Baroness Patricia Scotland, appears to be digging in her heels, hinting in an April 27 interview on Antigua and Barbuda's national television station:

I would be incredibly pleased, as you can imagine it, if Senator Kamina Johnson [Smith] thought again and felt maybe this wasn't the appropriate time to challenge a fellow Commonwealth/Caribbean [person] for this post […]

I have done six years of my eight-year term. Africa anticipates that they will have an opportunity to put forward an African secretary-general in 2024, when I complete my second term. And at the moment, of course, in accordance with tradition, there is no vacancy.

The reason Scotland has had her position extended for an additional two years is because the decision-making process was postponed because of the COVID-19 pandemic. Commonwealth heads of government had reportedly twice rejected an automatic extension of her position, with the UK government suspending its funding of the Commonwealth Secretariat in 2020.

In the interview, Scotland added that she was “very grateful for [Antiguan Prime Minister Gaston Browne’s] trenchant support” and “very grateful for all the leaders” who have also expressed their backing. The Antigua and Barbuda prime minister, who is also the immediate past chair of CARICOM, had accused Jamaica of making a “monumental error” in putting forward Johnson Smith as a candidate.

Scotland, who has been plagued with accusations of non-transparency, also defended herself against allegations of impropriety in the awarding of a contract to a company owned by a personal friend, a move that has cast a cloud over her tenure. In 2009, during her stint as Britain's attorney general, she was criticised for hiding an illegal immigrant worker, and in 2016, faced flak for expensive renovations to her “grace and favour” residence.

A Jamaican broadcaster tweeted a series of letters:

COMMONWEALTH NEWS🧵 : A series of letters have emerged from the UK gov’t which appear to show that Baroness Patricia Scotland accepted that her tenure would be extended to the next CHOGM. There was no consensus on her having a second term, simply an extension of the first term. pic.twitter.com/vo7GgAAFe8

The Jamaica Gleaner reported the story, with one journalist surmising:

Most Jamaicans online immediately (and huffily) rejected Scotland’s comments when they emerged in the local media on April 29, while one Twitter user noted an upsurge in interest in the issue locally, retorting:

And thus… She makes us all interested because shi rude https://t.co/e52Mg2ihsK

Smug! As if the position is a cushy title to be passed around by some preordained order of succession!
It's how some post colonial 3rd world leaders think but the sleeping Commonwealth can be so much more!

There was even a Twitter poll about the issue, which characterised the competition as a “catfight”:

Errr, Ma’am, that would be a NO! You are as “fellow Caribbean” as shepherd’s pie is a Caribbean staple. You are a Baroness, a member of the British House of Lords. You have had your turn. Please step aside & allow someone else to bring sound management & credibility to the office

In the UK, feminist commentator Valirie Akinstall tweeted an insightful thread on the matter, suggesting that the country's conservative government, as head of the Commonwealth of Nations, wants to replace Baroness Scotland — who is a paid-up member and former minister with the Labour party — with a candidate who is more politically in line. However, Akinstall noted that it is not a given that the UK will retain its position as Head of the Commonwealth once Prince Charles takes over:

This is who Saint Lucia should support. Not Baroness Scotland. We need someone who has lived and represented us in the Caribbean, and understands the people of the Commonwealth #KJSforCSG

A member of the Jamaican diaspora disagreed:

As a nation we should be wary of being elevated by imperialist actors whose interests don't align with our country's long term goals, especially when there is a cost to regional alliances

However, another defended Johnson Smith:

A Turks and Caicos-based lawyer did not respond positively to Baroness Scotland’s remarks:

If for nothing else, for this reason alone I support Johnson-Smith’s candidacy. Bright!!!

A Bahamian current affairs website, meanwhile, opined that “the British are after Baroness Scotland”:

So the Government of Boris Johnson has been busy as bees seeking to remove her from the day that she first obtained the office as Secretary General of the Commonwealth. One rumour and lie after the next in their relentless and unprincipled, money driven British tabloid press. They were unable to get a candidate to stick, after her Kenyan spoiler that agreed to step in could not muster a fight. Now they have found unfortunately a Caricom candidate in Jamaica. This has caused a bitter division in Caricom. There should be an honest broker in the matter and that should be the Chair of the Commonwealth Conference. The next up as Chair is the President of Rwanda Paul Kagame. But the British have just announced that in exchange for 122 million pounds, (we repeat 122 million pounds) Rwanda will take in all the people trying to break Britain’s borders as refugees from Ukraine and be processed in far away Rwanda. My my. No further comment.

While Johnson Smith’s fellow Commonwealth members must have enjoyed their jerk pork and curry goat, it remains to be seen whether she will be successful in her bid. Most (but not all) Jamaicans appear to be supportive of their candidate, but there are still several weeks to go until the Kigali meeting.