The sites represent a culture clash between old and new 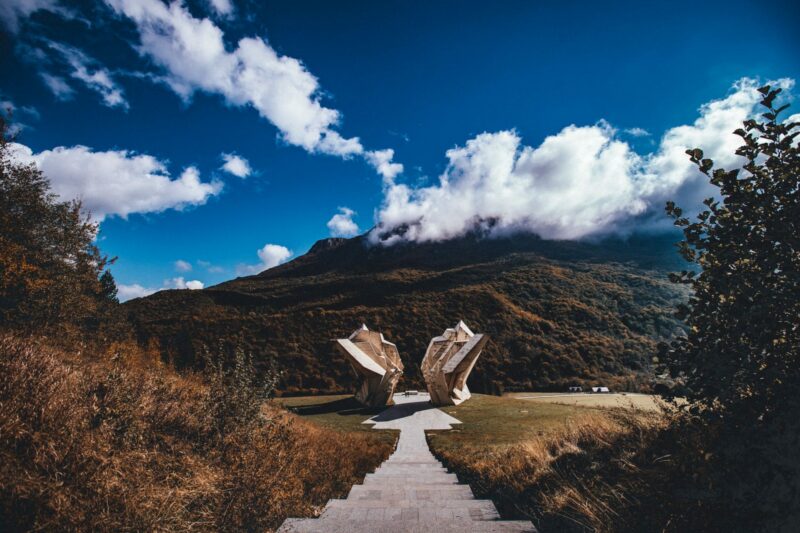 This article by Andrea Aleksić was originally published on Balkan Diskurs, a project of the Post-Conflict Research Center (PCRC). An edited version has been republished by Global Voices under a content-sharing agreement.

Before the Socialist Federative Republic of Yugoslavia broke up as a country, hundreds of children used to flock to Kosmaj, Kozara, Sutjeska and other important sites erected in memory of the victims of the Second World War. These visits are rare now, and some monuments have not been visited for years.

Most of the monuments dedicated to the war were erected during the 1960s and 1970s. They were built at sites of historically major World War II battles or at locations where there was significant civilian suffering. They are the works of excellent local sculptors and architects, such as Dušan Džamonja, Vojin Bakić, Bogdan Bogdanović, Ivan Sabolić, Svetislav Ličina, Vojin Stojić, Vanja Radauš, Gradimir Medaković, Miodrag Živković, Jordan Grabulovski, Janez Lenassi, Petar Krstiel, Vuko Bombardelli, Boško Kućanski and Marko Mušič.

The Belgian artist Jan Kempenaers has explored the topic of Yugoslav monuments through his Monuments: The End of an Era project. He caught the Western World’s attention with photographs of monuments exhibited in numerous galleries around the world. What impresses the exhibition visitors most is the abstractness of the Yugoslav monuments, their futuristic appearance, and artistic quality — all of which is atypical for the popular social realistic style that dominated Eastern Europe in that period. 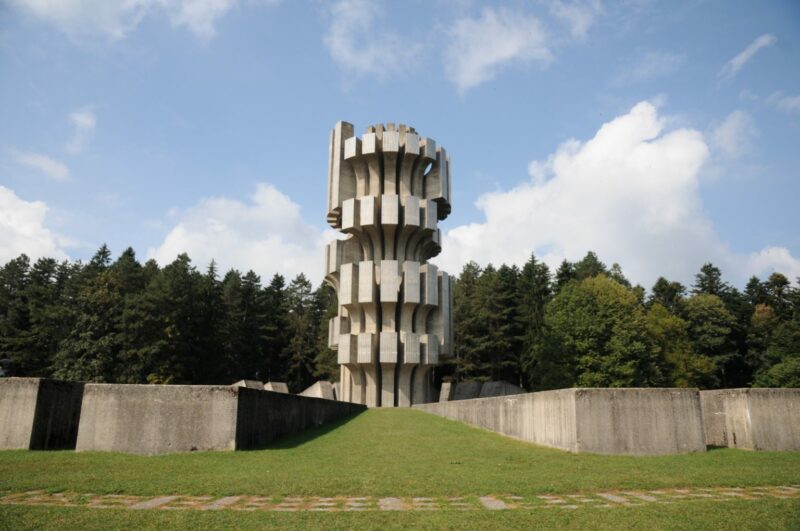 The monument at Mrakovica was erected to commemorate the 1942 Battle of Kozara. Photo: A. Čavić, used with permission via Balkan Diskurs.

Architect and historian of architecture Sabina Tanović believes that the former Yugoslavia created and cultivated a specific culture of memory that was focused on the formation of collectivity and a sense of belonging. In a statement for Balkan Diskurs she noted that the “current relationship with the monuments” partly reflects the long term success of the efforts of their authors.

Ghosts of the past

Specifically in Bosnia and Herzegovina, memorial sites dedicated to the Second World War are both ghosts of the past, but also places of resistance and remembrance.

“Civil society organizations, younger generations and activists recognize and use them as a platform for progressive messages. Unfortunately, the opposite is also true: anti-fascist symbols are appropriated for populist propaganda,” adds Tanović.

Numerous memorials and memorial complexes in Bosnia and Herzegovina, created during the Yugoslav period and dedicated to the victims of the Second World War, are today mostly neglected or, even adopted to promote ethnonational interests.

An example is the Vraca memorial complex in Sarajevo, which can be treated as layered evidence of history – from its opening in the 1980’s, through the aggressive destruction of the city [during the 1992–1995 siege], to the systematic destruction of physical memory through negligence and vandalism over the past three decades.

Today’s authorities are primarily interested in building new monuments, memorials, and memorial complexes dedicated to the memorialization of the war in BiH, so they treat Vraca as a peripheral project to be used as a symbolic gathering place only for relevant anniversaries.

A mismatch with nationalist policies

Nina Stevanović believes that today’s authorities do not accept these monuments because, in fact, they do not know what to do with them. They cannot appropriate them, she says, because they do not fit into the nationalist narratives of today’s Balkan politics. She explains that the modernity and abstractness of the work of Džamonja, Bakić, Bogdanović, Grabulovski, Zivković and Ravnikar, in addition to being multinational and multi-ethnic, create a memorial narrative that is left aside because it cannot be used to deepen nationalistic political narratives. 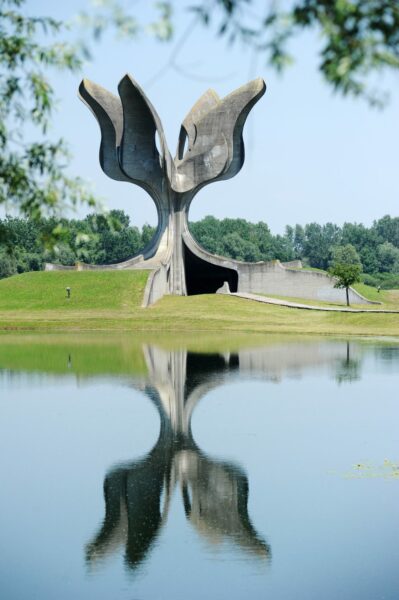 Nearly 3,000 Second World War monuments were destroyed in Croatia; A monument in Jasenovac. Photo: A. Čavić, used with permission via Balkan Diskurs.

In Croatia alone, close to 3,000 World War II monuments have been destroyed. Although anti-fascist monuments from the former Yugoslavia are massively neglected, and some of them are a constant target of vandalism in BiH, Sabina Tanović believes they will not be forgotten.

“They may be forgotten and rediscovered, but I believe there is salvation for them as long as there is a public interest in preserving them. Despite the lack of interest of the authorities, the Vraca memorial complex in Sarajevo has been recognized by citizens and activists as a unique historical heritage site, and clean-ups, public talks, and concerts have been organized on that space. It is probable that these events have stimulated the interest of the authorities to take certain measures intended for the preservation of the complex,” she says.

Can we protect them?

Although many of these monuments are formally protected, when it comes to their protection and restoration, in practical terms, formal protection becomes insufficient. First of all, even if they are restored, these monuments will be damaged again very quickly, such as happened with the Partisan necropolis in Mostar (Bogdan Bogdanović, 1961–1965), which was renovated in early May 2018, but again fell into disrepair in November of the same year.

The cause of the repeated neglect and vandalism, in her opinion, is the “non-existence” of such monuments in the everyday lives of citizens.

“Monuments to the victims of the Second World War remain empty of purpose, they become blank spaces in the collective memory, thanks, of course, to nationalist politics. And, as such, they lose the ‘everyday use value’ necessary for their true protection and successful revitalization,” adds Stevanović.

Regaining a sense of the abstract

It seems, Stevanović adds, that today an attempt is being made to erase that part of the past, and thus its architectural, sculptural and artistic legacy.

“The architecture and art of the period from 1945 to 1990 abounds in boldness and excellence, and those monuments are the most direct example. Ignoring them, we deprive our culture of exactly that exceptionality and courage that it needs both as a memory and as a guide,” says the architect.

Monumental culture in Yugoslavia has developed new tendencies in artistic styles over time, so we see that many monuments look abstract and some are difficult to interpret. The issue of abstraction, says Sabina Tanović, is especially important in the commemoration of collective traumas, such as the Holocaust. This abstract expression, she explains, can be traced from memorial projects after the First World War, when it was necessary to design memorial cemeteries and ossuaries in a way that pays homage to soldiers of different origins. 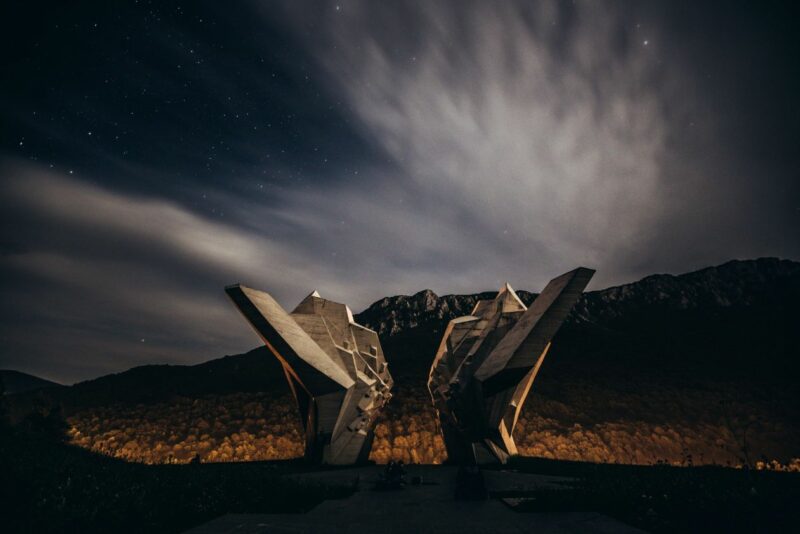 “Edwin Lutyens’ solutions, for example, insist on the abstraction of symbols with the aim of creating a uniform collectivity in the context of a memorial cemetery,” she notes.

Ultimately, says Stevanović, it contributes to the collective oblivion of monuments built in memory of the victims of the Second World War.

“Only in the last decades — since the centenary of the First World War — have memorial sites gained their so-called “visitor centers” and memorial museums, with the goal of preserving the past and, among other things, bringing the abstraction of memorial expression closer to the modern visitor,” explains Tanović.

The same is the case, she says, with the memorial sites of the Second World War, where we have witnessed a large number of memorial museums, memorials, and monuments built in the last two decades. In her opinion, the memorial projects of Yugoslavia were very progressive, especially regarding their museological conceptualization, where, in addition to monuments, memorial museums were planned, as is the case with Tjentište, Kozara, and Vraca.

“So, in addition to abstract and figurative symbolism, the projects have also included educational elements and historical contextualization through the design of a memorial museum, such as the ‘21st October’ Memorial Museum in Kragujevac. The essence of the Yugoslav anti-fascist memorials is precisely their unity in diversity, which, in addition to the then-dominant artistic trends, had an impact on overall memorial culture and expression,” explains Tanović.