Jamaica has been chastised for breaking ranks 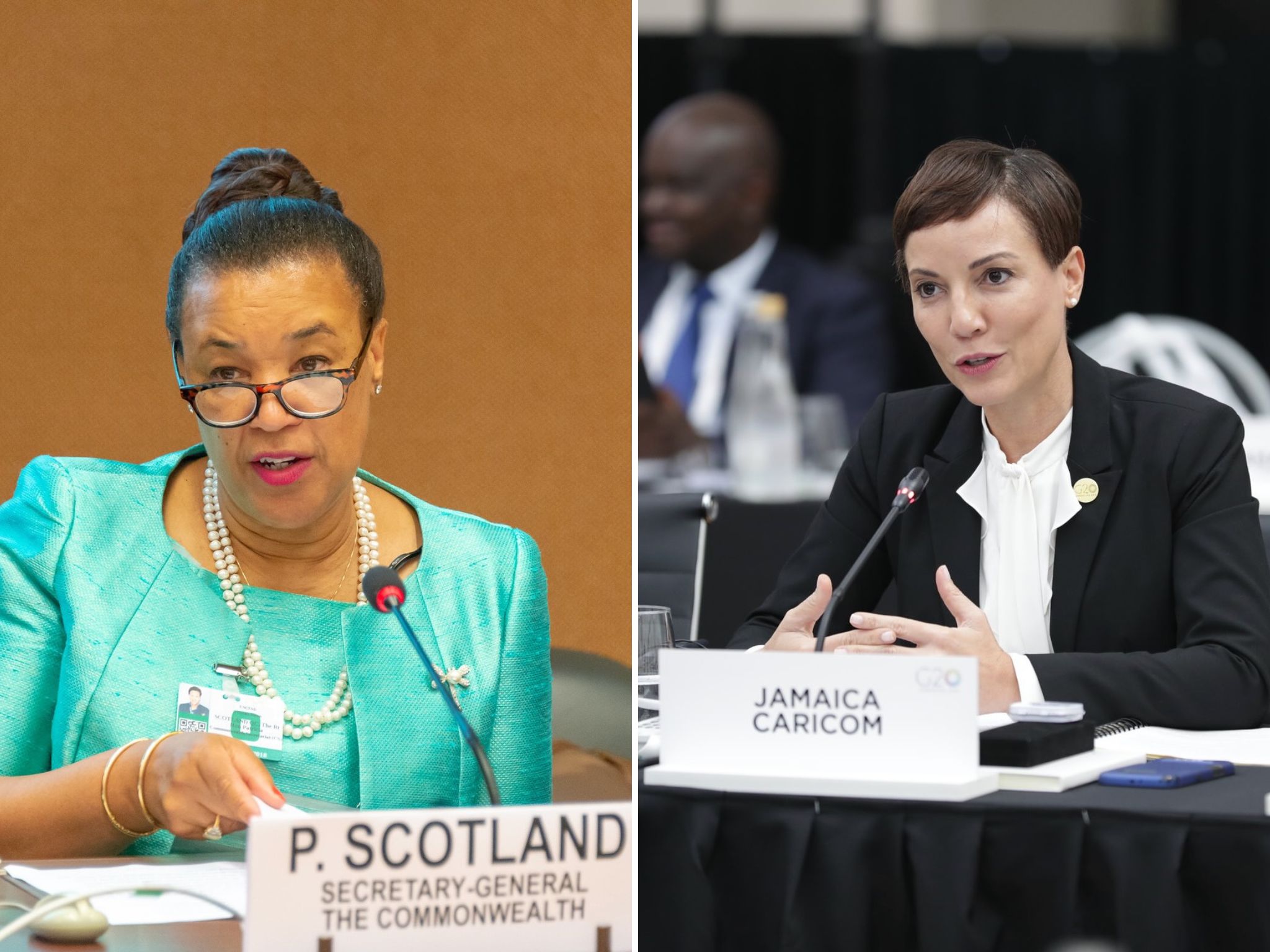 L-R: Photo of the incumbent Commonwealth secretary-general, Patricia Scotland, by UNCTAD on Flickr, CC BY-SA 2.0; and photo of Jamaica's candidate for the post, Kamina Johnson Smith, by G20 Argentina on Flickr, CC BY 2.0.

On April 21, at the Jamaican High Commission in London, Kamina Johnson Smith, Jamaica's minister of foreign affairs and trade, formally launched her candidature for the post of Commonwealth secretary-general.

The current holder of this position, Dominica-born, UK-bred barrister and politician Patricia Scotland, heads the Commonwealth Secretariat, the organisation that serves the Commonwealth of Nations, a 54-member group of former British colonies.

The announcement of Johnson Smith's candidature, however, has not been without controversy, starting with the fact that it seemed to come out of nowhere. About a month before Johnson Smith threw her hat into the ring, members of the Caribbean Community (CARICOM) had met and agreed to back the incumbent for a second term.

This was in keeping with Antigua's prime minister and then CARICOM chair Gaston Browne's September 14, 2021 statement that the Commonwealth has “held to the tradition of at least two terms for a secretary-general and to the principle of rotation between regions.” At the time, the African, Asian and Pacific regions of the Commonwealth had themselves been presenting potential candidates to run against Scotland, who has been mired in accusations of impropriety regarding issues of transparency and the spending of public funds, to which she gave an official response via the secretariat.

One potential challenger, Kenya's minister of energy Monica Juma, had announced her bid for the position in August 2021, then later pulled out, but the mere fact that there were challengers at all didn't sit well with the Antiguan prime minister, who maintained, “This runs counter to the principle of rotation which would see Africa assuming the office of secretary-general in 2024 when the Caribbean term would normally come to an end, followed in turn by the Pacific.” However, this concept of “turns” is not enshrined in the rules of the Commonwealth.

Browne has since called Johnson Smith's bid for the position of Commonwealth secretary-general a “monumental error” on the part of Jamaica.

Given that just a month prior, during a royal visit to the Caribbean as part of the celebrations for Queen Elizabeth II's platinum jubilee year, Jamaica's prime minister Andrew Holness expressed to Prince William his country's intention to consider becoming a republic, following in the footsteps of Barbados, which acquired that status on November 30, 2021, the putting forward of Johnson Smith appears a bit ironic. Prime Minister Andrew Holness, however, has maintained that there is no connection between Johnson Smith's nomination and Jamaica’s push to become a republic.

While the final outcome of the bid for the position of secretary-general will be decided during the upcoming Commonwealth Heads of Government Meeting (CHOGM) in Kigali, Rwanda, which takes place from June 20-25, the battle between Johnson Smith and Scotland has been the source of much discussion in the Caribbean, especially around the issue of a divided CARICOM bloc.

As early as April 13, regional journalist Wesley Gibbings wrote a column about the “multi-layered fiasco,” which he observed contained “procedural, political and perceptual (cognitive) layers.” Drawing attention to the “languaging” of a March 3 communiqué regarding the proceedings of the inter-sessional meeting in Belize, Gibbings wrote:

There is an enormous difference between the contents of a public communiqué and the official report of proceedings. Some of us who keep tabs on the process have been inclined to press for more disclosure to ensure greater precision in the public framing of issues raised and agreements reached.

Had the latter been the case, it would have been known by everyone that when the subject of the candidacy came up there was neither unanimous agreement nor mention of Jamaica’s active interest in the matter.

Knowing more about what actually happened at the meeting, and what was not reflected in the single-sentence statement on the matter, would have better nuanced use of the word ‘overwhelming’ and not ‘unanimous’ support for Scotland.

Just as importantly, Gibbings reminded the region of the backstory. In 2015, a CARICOM majority supported the candidacy of Antiguan/Barbudan diplomat Ronald Sanders. But then, Dominica, the island of Patricia Scotland's birth, nominated her instead, pushing her “Caribbean-ness” as part of her election campaign. Scotland, who was raised British and has held some very high positions in the UK, won — and while she has never denied her West Indian roots, she had also never overtly traded on them either, before this nomination.

Twitter, meanwhile, echoed Gibbings’ sentiments that “the ‘political’ layer of the fiasco has sloshed about in a toxic swamp of insults, jingoistic grandstanding, and general ignorance about the role of the regional movement”:

We've been talking about regionalism for decades. Decades! The Caribbean nations have never united except thru sports. & even then…
The Caricom dream been dead.
We don't trade fairly.
We don't encourage ease of travel. We treat select groups with disdain.
Admit it & move along

Nevertheless, Gibbings felt that because Caribbean leaders settle most issues “by consensus with relatively little fuss,” CARICOM, like any geopolitical grouping, has “many things that need fixing,” but these are not tantamount to “terminal decay.”

However, an editorial in the Jamaica Gleaner, largely viewed as the country's paper of record, thought the timing of the announcement of Johnson Smith's candidacy “messy,” saying it had the potential to “cloud Rwanda’s President Paul Kagame’s [recent] visit to the island,” as well as sully “Johnson Smith’s prospects for a running start in the post, should she be elected.” Kagame will chair the upcoming meeting in Kigali where the secretary-general will be decided upon.

The editorial also worried about the possible interpretation “that Kingston is operating a stalking horse for others,” as well as the perception of “Jamaica’s foreign policy posture, similar to when it supported the Trump’s administration’s efforts to remove Venezuela from the Organization of America States and stopped just short of recognising Juan Guaidó as the president of Venezuela rather than Nicolás Maduro.” CARICOM has effectively upheld Maduro's legitimacy.

And so, Jamaica is again in the regional dog-house, accused of breaking ranks. In fact, Jamaica's attorney general, Marlene Malahoo Forte, has said in the context of Johnson Smith's bid for the position of Commonwealth secretary-general, that Jamaicans should put the country above regional concerns. Though Antigua's Gaston Browne has admitted that the region is by no means unanimous in its support for Scotland, he suggested that Jamaica was being “encouraged by other countries that are seeking to divide us to create a pathway for a non-CARICOM consensus candidate to emerge.”

This tweet, from Jamaican attorney Kenyatta Powell, seemed to concur:

The best way to understand what is happening with Kamina Johnson's nomination is to observe the fact that the JLP is CARICOM-skeptic and the white Commonwealth is using this fact to try to get rid of Baroness Scotland, whom they intensely dislike for, well, reasons.

It is being suggested, largely because of a leaked June 2020 letter by British prime minister and current Commonwealth chair Boris Johnson, which claimed a “significant and diverse” number of heads of government were against renewing Scotland’s tenure, that the United Kingdom is one of those “other countries” attempting to divert support away from her, ostensibly because of the optics around the allegations against her, none of which have yet been proven and all of which she has denied.

Scotland is well connected, experienced, and has triumphed over other rivals before; Johnson Smith, despite her impressive resumé, lobbying efforts, and people's faith in her capability, is a relative newcomer to this arena. By June 25, the decision will be made, though its potential effects on Caribbean unity remain to be seen.