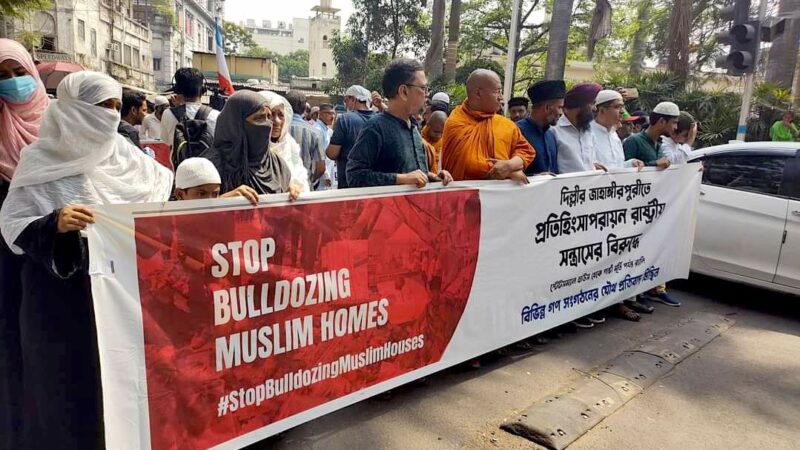 Protest in Kolkata, India against the “bulldozer demolition drive” in Delhi. Image by Ashid Reza. Used with permission.

This story is part of a Civic Media Observatory investigation into the Indian media ecosystem. To learn more about this project and its methods, click here.

Anti-Muslim violence has been escalating in India with state-sponsored attacks on Muslims and open calls for genocide becoming increasingly common. On the other hand, through strategic campaigns and the dissemination of misinformation and propaganda on social media platforms and primetime news channels, right-wing groups have made Hindus believe in their victimhood. They have convinced the majority that the only way they can protect their rights and freedom is by eliminating Muslims from the country. “Hindus are under threat,” “Muslims should be treated as second class citizens,” and “Secularism marginalizes India's Hindus” were the top narrative frames present in media items in the CMO research.

Less than a week after India witnessed communal clashes and riots in several states on April 10, 2022, during the celebration of Ram Navami (a festival to celebrate the Hindu god Rama), similar violence broke out in the capital of India, New Delhi on the occasion of Hanuman Jayanti (a festival celebrating the birth of the Hindu god Hanuman).

Under the governance of the Hindu nationalist Bharatiya Janata Party (BJP), right-wing Hindutva outfits have gathered the support and authorisation to carry out their alleged mission of turning India into an  Hindu nation. To that end, Hindu religious festivals and processions have reportedly been weaponised to assert Hindu supremacy and threaten minority communities. These “Shobha Yatras” or processions have been used as a tool to disrupt existing communal harmony in several places in India and attack Muslims who are seen to be enemies of Hindutva.

What happened in Jahangirpuri?

On Saturday, April 16, communal clashes broke out in Jahangirpuri in New Delhi when Hindu groups held a shobha yatra to celebrate Hanuman Jayanti. Videos from the procession showed saffron-clad Hindu men brandishing swords, shotguns, sticks, and other weapons while passing through Jahangirpuri (which has a sizeable Muslim population), dancing to songs and chanting slogans all of which contained Islamophobic statements and anti-Muslim threats. They allegedly tried to wave saffron flags (which are a symbol of Hinduism and Hindutva) in front of a local mosque, which then led to clashes. The very next day, Delhi Police made 22 arrests in relation to the violence. All the arrested individuals were Muslims.

Delhi Police issued a statement citing the names of the Vishwa Hindu Parishad (VHP) and Bajrang Dal (both right-wing Hindutva outfits) in relation to the Jahangirpuri violence. They also filed a First information report (FIR) against the two groups for holding the procession without prior police permission or clearance. The VHP then openly made threats claiming that it would launch a “battle” against Delhi Police if any action were taken against its members. Shortly after, Delhi Police retracted the statement and issued a new one that made no mention of the two groups.

Meanwhile, Hindu right-wing groups and their supporters took to social media to give the signature battle cry “Hindu khatre main hain” (Hindus are under threat). Right-wing editorial media outlets like Sudarshan TV, OPIndia, Aaj Tak , and Zee News, were quick to build a narrative that demonised Muslims and blamed them wholly for the violence. They claimed that Muslims were intentionally targeting Hindus who were just trying to peacefully celebrate their festival. They asserted that any action that prevents Hindus from celebrating their religious festivals in any way they please is an act of anti-Hindu aggression.

The tweet above is just an example of Islamophobic narratives that flooded social media platforms the week following the incident.

In response, Hindu groups started demanding bulldozers in New Delhi to demolish the homes and shops of Muslims whom they claimed to be “rioters,” just like what had earlier happened in Madhya Pradesh on April 11, following the Ram Navami violence. CMO research data shows that dubious pro-Hindutva editorial media outlets helped amplify this call and uphold a larger demand that Muslims be punished for disrupting Hindu festivals.

“The News,” part of a set of editorial media channels, notorious for manipulated and biased reporting, published its report on the incident with 9.9 million views on Facebook. The video included interviews of members of the Hindu community who claimed that Muslims were responsible for riots and violence in the area. At the reporter’s urging, the respondents were also seen blaming the incompetency of the Arvind Kejriwal-led Aam Aadmi Party government for communal violence in Delhi. They claimed that only powerful leaders like Yogi Adityanath (born Ajay Singh Bisht, the holy man who is BJP chief minister of neighbouring state Utter Pradesh) can bring peace to Delhi by running bulldozers over the property of “rioters.”

Just a few days later on April 20, North Delhi Municipal Corporation (which is run by the BJP) declared that an anti-encroachment drive would be carried out in Jahangirpuri to remove illegal constructions. This was right after NDMC received a letter from Delhi’s BJP chief demanding that the illegal encroachments and properties of “anti-social elements and rioters” be bulldozed.

Fulfilling the dreams of the many Hindutva groups who had made such demands online, bulldozers reached Jahangirpuri on Wednesday, April 20 morning, accompanied by a large number of security personnel. Despite the Supreme Court’s order to maintain the status quo, bulldozers in Jahangirpuri continued to raze shops and homes to the ground. They only stopped at noon after repeated appeals by lawyers and activists, and physical intervention by political leaders like Brinda Karat from the Communist Party of India (Marxist) (CPI(M)), who stood in front of a bulldozer to stop the demolition.

While people defended the demolition drive, claiming that it was simply done to remove illegal constructions, Muslims claimed that the anti-encroachment drive was orchestrated to simply target and punish the Muslim community. They cited the timeline of the events (demolitions took place in Jahangirpuri right after the Hanuman Jayanti incident) and disregard for court orders as proof that this was a state-sponsored targeted attack.

Not MUSLIMS houses, only the illegal constructions of rioters in #Jahangirpuri are demolished using #Bulldozer and also to remove Illegal Encroachment from roads & government land occupied by Bangladeshi.#StopBulldozingMuslimHouses #DelhiRiots2022 https://t.co/bbwpIIKRKU

Human rights lawyer Kawalpreet Kaur, along with other activists, took to social media to share images of the destruction caused.

The photos she shared show a temple and a mosque in Jahangirpuri that are both encroachments. Yet the mosque was damaged by bulldozers while the temple remained untouched. Incidentally, this is also the mosque outside which the Hanuman Jayanti clashes took place.

Meanwhile, there have been sporadic protests across the country against the “bulldozer demolition drive” in Delhi. On social media, many condemned the incident and the hashtag #StopBulldozingMuslimHouses trended on Twitter as many critics called the demolition drive “unconstitutional.”

The hate and violence we see on the streets are encouraged by the hate that is spewed on digital forums. Social media pages and editorial media channels uphold ideas of Hindu indigeneity and Hindu supremacy. Hindus are mobilized to fight for a “Hindu Rashtra” (Hindu nation). They are made to believe in their collective victimhood, with the only possible solution presented as the elimination of Muslims from the country.

The_hindu_talks1 is one of the many Hindutva nationalist pages on Instagram that have been spreading communal hatred. This particular post tries to put forward the idea that kind Hindus show love and respect to Muslims. However, Muslims attack Hindus and try to hurt them. Hindus who are blinded by the idea of secularism are unable to see reality.

CMO research data has shown that Twitter threads often use false narratives. Hashtags that are used to bring attention to the anti-Muslim violence taking place in India are hijacked to present Islamophobic narratives. Anyone who speaks up against this is branded as a traitor, an anti-national and a terrorist. Criticism and opposing views meet with contempt, harassment and often legal action.

This, coupled with misinformation campaigns by shady, right-wing media houses, ensures that unaware citizens of a country get a one-sided manipulated narrative that encourages them to jump on the Hindutva bandwagon, as CMO data showed.

While opposition parties have signed open statements and petitions, they have failed to call out the nature of this communal violence for what it is, i.e. anti-Muslim violence, perhaps out of fear of offending their upper-caste Hindu supporter base. With the Indian government weaponising laws and policies to target its critics and silencing anyone who speaks up against its Hindutva politics, the space for dissent in India is rapidly shrinking.