Anti-Muslim campaigns have been on the rise in India 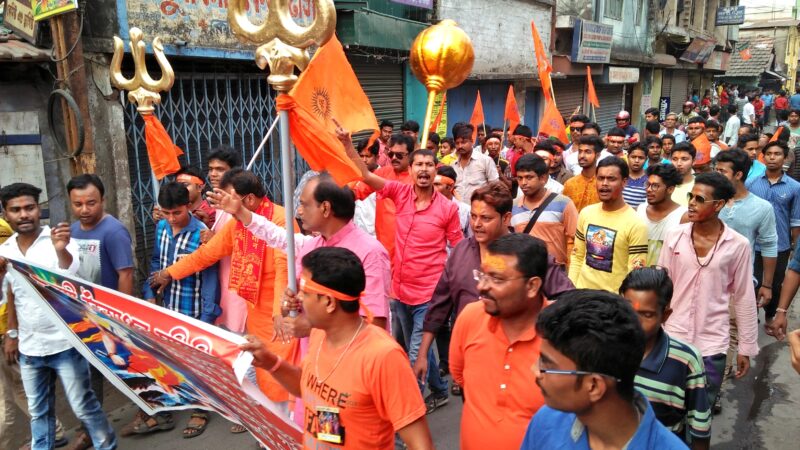 Communal clashes between right-wing Hindu supremacist groups and the minority Muslim community have been reported across India at two recent Hindu festivals within a week.

The first time was on the occasion of Ram Navami on April 10, when clashes were reported in Bengal, Jharkhand, Gujarat, Madhya Pradesh, Karnataka, and Bihar. More clashes were reported on Saturday, April 16, at Hanuman Jayanti from Kurnool, Haridwar, and the Jahangirpuri area in India’s capital, New Delhi.

Ram Navami is an important Hindu festival that is traditionally observed by fasting and culminates on the ninth day, the birth of Lord Ram, one of the most significant Hindu deities. Devotees offer prayers and rituals at temples, sing devotional songs, and conduct rituals and chariot processions at home and at the community level. However, there is a century-old history of violent processions and using these Hindu religious occasions as opportunities to galvanise Hindus, instigate hate and assert Hindu supremacy.

Reports suggest that in the most recent clashes, loud Ram Navami processions were taken through Muslim neighbourhoods with a group of Hindu men wearing saffron robes, carrying sticks and swords, and playing provocative anti-Muslim songs outside Muslim homes and mosques. Viral videos on social media have confirmed such reports.

To be noted, certain neighborhoods in India are identified as “Muslim areas” because they are forced to live in ghettos as landlords or property dealers avoid renting or selling homes to Muslims. For decades segregation has been practiced covertly but, after the coming to power of Narendra Modi‘s Bharatiya Janata Party (BJP), open calls to boycott Muslims have been given by BJP leaders alleging that Muslims are carrying out “land jihad” (supposedly force people sell off their lands). In contrast, however, several reports have emerged from the states of Gujarat and Uttar Pradesh of Muslims being forced to sell off their houses and relocate, and a no-rent, no-sale policy being practiced in Mumbai and other cities.

The BJP, the right-wing Hindu nationalist party, has been in power as India's federal government with an overwhelming majority since 2014.

On many occasions, BJP leaders and legislators have been found to be personally making incendiary anti-Muslim speeches or singing songs. In Hyderabad, BJP member of the legislative assembly T Raja Singh, sang a song and raised slogans promoting Hindu supremacy. BJP leader Kapil Mishra was heard in a viral video making anti-Muslim hate speech on April 10, around the same time when the violence took place in Khargone, in the state of Madhya Pradesh. Khargone saw one of the worst cases of violence in which at least one person died.

Hanuman Jayanti celebrates the birth of the Hindu deity Lord Hanuman. Like Ram Navami, it is traditionally celebrated by visiting temples to make offerings and prayers, with events like community feeding and recitation of prayers and hymns at home or in the community. However, the “Hanuman Jayanti Shobha Yatra” that took place in certain parts this year is a seemingly new phenomenon with hardly any historical records in the public domain about its origins.

Stone-pelting at the yatras, allegedly by the Muslim community, has been reported from all three locations after Hindu extremist groups took the yatra close to the mosques during Azan, the Muslim call to prayer. In Delhi’s Jahangirpuri area, three such yatras were held throughout the day and violence erupted at the third. According to the police, the third yatra took place without permission.

Hindu and Muslim groups have blamed each other for provoking violence in the Jahangirpuri area. Delhi Police has so far made 23 arrests, from both Hindu and Muslim communities, and also registered cases against Hindu extremist groups Vishwa Hindu Parishad (VHP) and Bajrang Dal. Both VHP and Bajrang Dal are known for their criminal antecedents and have been called “religious militant outfits” by the CIA.

The spate of violence on Ram Navami and Hanuman Jayanti was preceded by a series of actions, by both state and non-state actors, aimed at deepening the religious divide in India and relegating the Muslim community to second-class citizen status, a vision first raised by Rashtriya Swayam Sevak (RSS) ideologue and founder MS Golwalkar. The RSS is the ideological parent of the ruling party BJP.

Around 14 percent of India’s population is Muslim, making it the world’s third-largest Muslim population. Hindus are in the majority, comprising around 80 percent of the population. The two communities have been living in harmony, albeit with sporadic clashes, for around 1,000 years. India often boasts of its rich syncretic culture and unity in diversity on the world stage, aspects which are endangered because of growing right-wing Hindu nationalism by the ruling party, RSS and thousands of affiliated Hindu supremacist groups.

Earlier this month, in Meerut, Uttar Pradesh, a food cart owned by a Muslim man was vandalised by a group called “Sangeet Som Sena” (the army of BJP leader Sangeet Som) claiming that the man was selling meat during the Ram Navami fasting period. The victim, however, said he was selling vegetarian biryani. In October 2021, meat shops were forcefully shut by an outfit called “Hindu Sena” (army of Hindus), a right-wing Hindu organization among many such, in Delhi’s Najafgarh area.

A mayor in Delhi passed a verbal order this month to shut down meat shops for the nine days of Ram Navami to cater to “Hindu sentiments” even though there is no law in the country that allows this, and online food delivery platforms, restaurants and bars were all allowed to sell meat, and they did. The said ban was not passed in writing and nobody has seen the official communication, yet meat shops in South Delhi remained shut out of fear and confusion.

Open calls for Muslim genocide were made by Hindu religious leader Yati Narsinghanand at a self-styled “Dharam Sansad” (religious parliament) held in December 2021 at Haridwar, Uttarakhand. Four other Hindu religious leaders were named in a First Information Report (FIR) related to the case, which came to be known as Haridwar Hate Speech. The brazen call for violence shook the nation, leading to Narsinghanand's arrest. However, he obtained bail within a month, close to the Uttar Pradesh assembly elections and repeated the hate speech in Una, Himachal Pradesh, another state going into elections in November this year, breaking his bail conditions. Anti-Muslim hate speech tends to help the BJP's far right Hindu nationalism card during the poll campaigns.

Another Hindu religious leader, Bajrang Muni, made rape threats to Muslim women on April 2 and has been arrested.

For months, there have also been anti-Muslim campaigns targeting almost every aspect of their lives, such as their traditional trade and business, right to make a living, food style, job opportunities, religious attire worn by Muslim women, right to pray, or chose a romantic partner. Even the Urdu language has come under attack because its origin is believed to lie with Muslim people. Most of this anti-Muslim propaganda has been carried out by right-wing Hindu nationalists on mainstream media TV channels, social media and on the streets with tacit or explicit support from state actors, including the judiciary.

Anti-Muslim hate, the forced impositions of Hindu religious symbols, practices and dietary restrictions upon the rest of India, while simultaneously opposing Muslim practices and symbols, and violent attacks such as the mob-lynching of Muslims have become routine in India ever since the Modi government came to power.

These anti-Muslim sentiments are framed by the RSS's Hindu nationalism project, which envisions India as a nation for Hindus, with other communities, particularly Muslims and Christians, having secondary rights. The secularism adopted by Indian National Congress leaders such as Jawaharlal Nehru and Mahatma Gandhi at the time of India's independence from Britain was not acceptable to the RSS.

After the Modi government came to power, several pet projects of RSS in the making of a “Hindu nation” have come to fruition, such as the the abrogation of Article 370 — a special status for Muslim-dominated areas of Kashmir for demographic and cultural protection — and a nationwide beef ban. There is also the Citizenship Amendment Act (CAA), which, for the first time adds religious factors to Indian citizenship and specifically bans Muslims from the neighbouring countries Pakistan, Bangladesh, and Afghanistan who entered India before December 31, 2014, from seeking Indian citizenship via the expediency route, even though Hindus (and Sikhs, Jains, Buddhists, Christians) from these countries are to be instantly given citizenship).

Further, in a bid to completely destroy syncretic Indian culture even the depiction of harmless Hindu-Muslim love in TV advertisements and cinema has been attacked. One of India's most popular TV news channels, Zee News, peddled a “jihad chart” labelling every activity by a Muslim as one or another form of jihad (holy war) — propaganda that then gets spread to millions via social media.

India seems to be in a continuous state of armed conflict between the dominant group and religious minorities aided and abetted by the Hindu supremacist organization RSS, which was formed in the 1930s and directly inspired by the Nazi party, and its political arm, BJP, which is currently ruling India for the eighth year running.