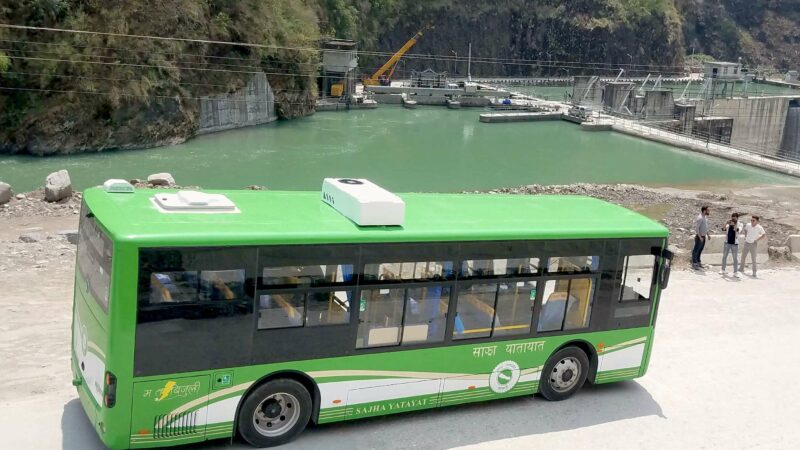 One of the three buses that Sajha Yatayat imported from China drove past the Upper Bhote Kosi hydroelectric project on Thursday, April 14, 2022. Thirty-seven more buses have been ordered. Image by Bhushan Tuladhar [1] via Nepali Times. Used with permission.

This article was first published in Nepali Times [1]. An edited version is republished on Global Voices as part of a content-sharing agreement.

Nothing could be more symbolic of Nepal’s goal of being net-zero in energy by 2045 than the sight on New Year’s day on Thursday, April 14, 2022, as three new Chinese electric buses drove past a hydroelectric plant and a solar panel array on the Bhote Kosi River.

The three buses are the first of 40 battery-powered buses ordered by the Sajha Yatayat [2] cooperative public transport service from China. They will be running on renewable energy generated by power plants like the 45MW Upper Bhote Kosi [3] hydroelectric project along the Arniko Highway in Phulping Katti, Central Nepal to the Chinese border.

These three buses arrived at the Tatopani customs [4], a major customs point along the Nepal-China border, a few days before and will be brought to Kathmandu on flatbed trucks since the highway is rough in places for the low-clearance buses. And after undergoing gradient, roadworthiness and range tests in the capital Kathmandu, the other 37 buses will arrive later this year.

The USD 3.7 million deal with China’s CHTC company also includes the supply of 20 chargers of 90 kW each, which can top up the batteries in two buses simultaneously in four hours.

“This is the future for transportation energy in Nepal,” says Sajha Yatayat board member and clean energy activist Bhusan Tuladhar. “We have to transition to electric public transport [5] not just to reduce our carbon footprint and petroleum import bill, but also to reduce air pollution from diesel vehicles.”

Tuladhar talks about how the buses will address Nepal’s 3E’s: energy management, environment management and economic management. “Electric buses are a win-win-win for us,” he adds. “Although the capital cost is high, with diesel prices being what they are, our operating costs will come down to make them feasible in the long run.”

Even before the current fuel price hike, 40 percent of Sajha Yatayat’s operational cost was fuel, spare parts and maintenance. With the diesel price hike, operating costs will have gone up to 50 percent, and the additional benefit is that battery-powered vehicles have lower maintenance costs.

Besides the 40 Chinese electric buses, Sajha is also negotiating with an Indian company for four smaller buses to be operated within Lalitpur, with more buses to be added later. 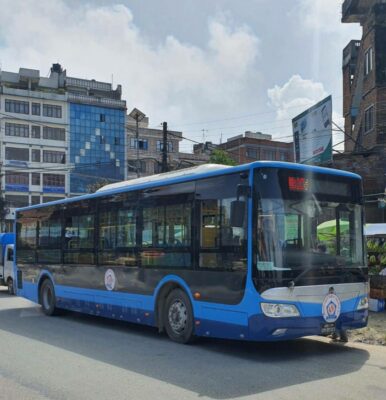 Later, Sajha will also expand to add 12 more electric buses for inter-province long-distance connections. Earlier, the private Sundar Yatayat (pictured) had also brought in four electric buses which it is using on its Ring Road routes, and Guna Airlines uses a fleet of electric ramp buses at Kathmandu’s domestic airport.

Nepal plans to electrify 25 percent of private cars and 20 percent of buses by 2025, but while private electric SUVs get a tax rebate and diesel buses are subsidised, electric buses cost five times more [7] because of high customs duty and other taxes. 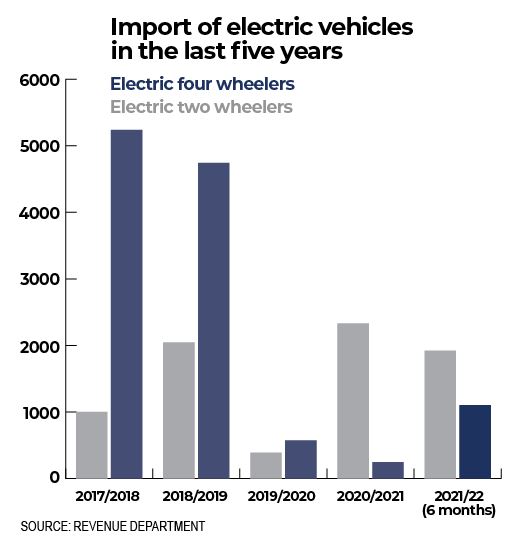 Nepal’s installed generation capacity from hydropower plants increased by over 700 MW in the past year, taking a total generation to 2,150 MW. However, most of these are from run-of-the-river plants which mean generation falls in dry months, and there is a surplus during the monsoon. Currently, Nepal is importing up to 400MW from India because of the domestic shortfall but can export to India during the rainy season.

At the COP26 Climate Summit [8] in Glasgow last year, Prime Minister Sher Bahadur Deuba committed that Nepal would be on a path of “cumulatively net-zero carbon” from 2022 and by carbon negative after that by reducing fossil fuel consumption and increasing forest cover to 45 percent by 2030. 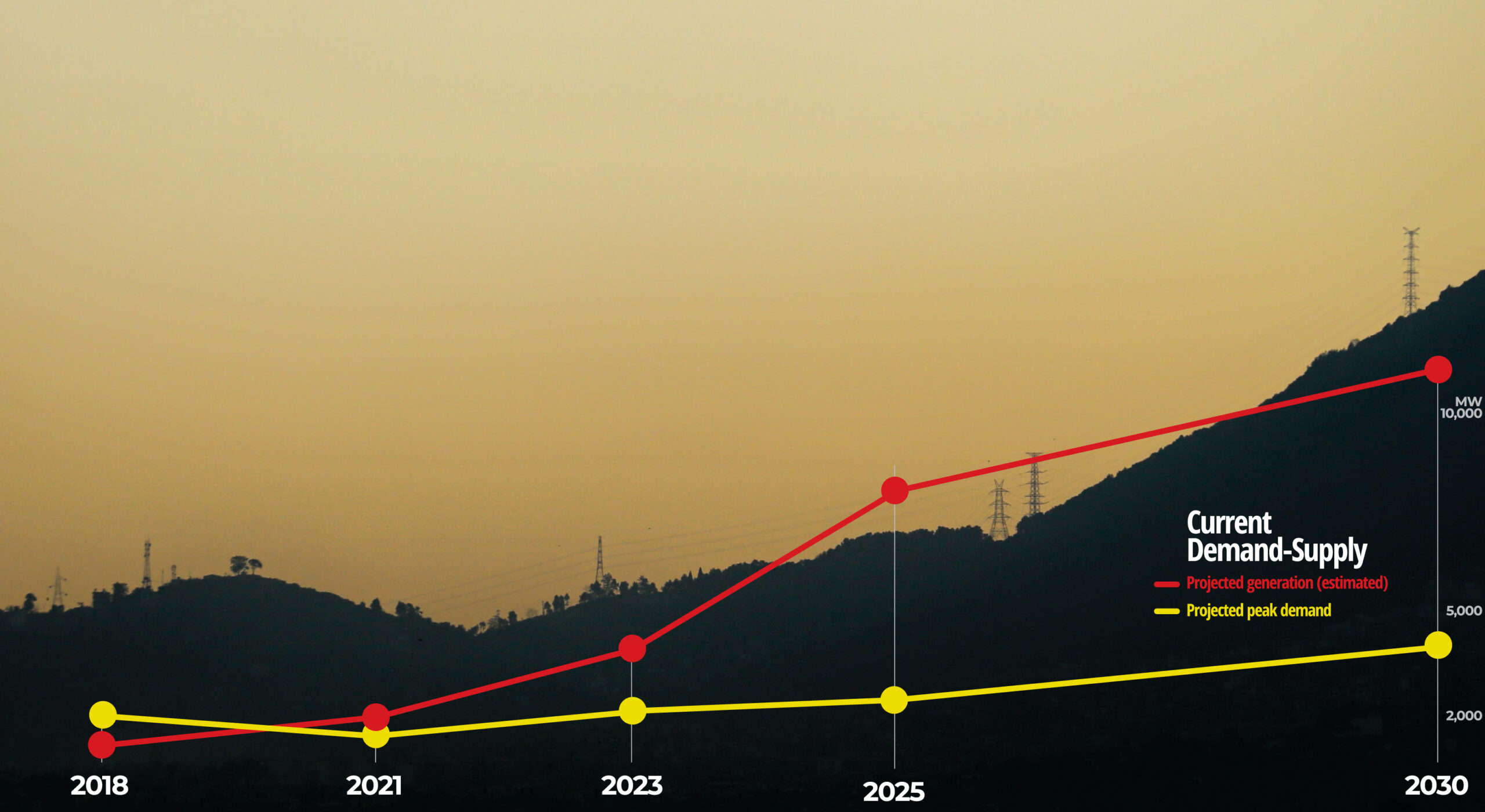 Nepal spent [9] NPR 217 billion (USD 1.77 billion) last fiscal year on importing petroleum, and NPR 180 (USD 1.47 billion) billion just in the past six months [10]. With the global price hike of crude oil, this amount is expected to be much higher in the current fiscal year. Petroleum products make up 13 percent of Nepal’s total imports [11].

Petrol and diesel prices at the filling stations have been hiked four times in the past six months, and the cost of petrol is now NPR 160 (USD 1.30) per litre – nearly double what it was last year. The government is planning to announce a five-day workweek to reduce petroleum use by 20 percent. 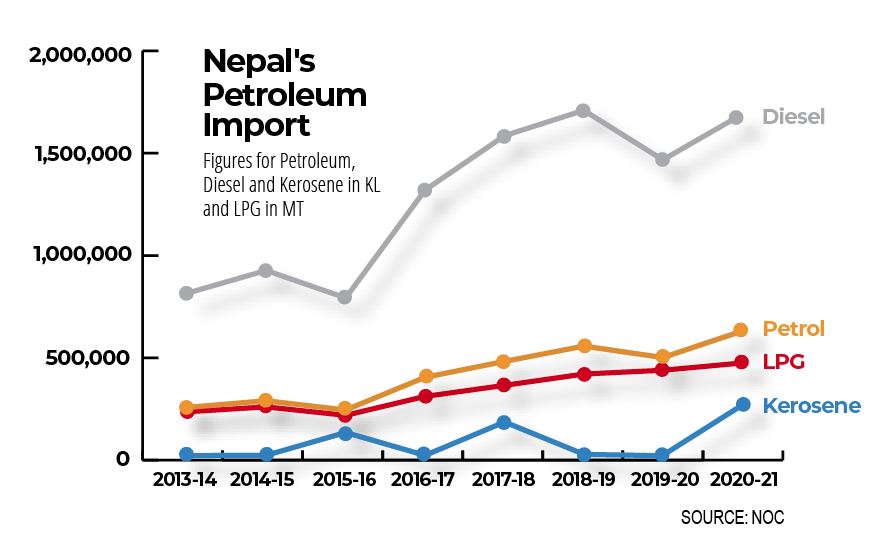 The state-owned Nepal Oil Corporation (NOC) says [11] it loses NPR 16 (USD 0.13) for every litre of petrol and NPR 12 (USD 0.10) for diesel it sells, raking up losses of NPR 5 billion every month, which means further price hikes are a certainty. NOC says [12] it has run out of cash to pay for future fuel imports from India.

Although the sight of electric buses driving past hydroelectric and solar plants on their way from the Chinese border to Kathmandu was a welcome sight, the poor condition of the Arniko Highway was also an indication of the dilapidated state of Nepal’s transport infrastructure. The buses cannot negotiate the bumpy road on their own and have to be loaded onto the backs of flatbed trucks to be ferried to Kathmandu.

The highway, as well as the Kodari [13] checkpoint between Nepal and China, has remained closed after damage in the 2015 earthquake. Built in 1996, the Upper Bhote Kosi power plant was also hit by twin disasters of the earthquake and a glacial lake outburst [14] flood in 2015 and resumed operation only three years ago after repairs.