Who is John Lee? A look into the incoming Hong Kong chief executive's political positions

He discussed the 2019 extradition bill, national security, and media crackdowns 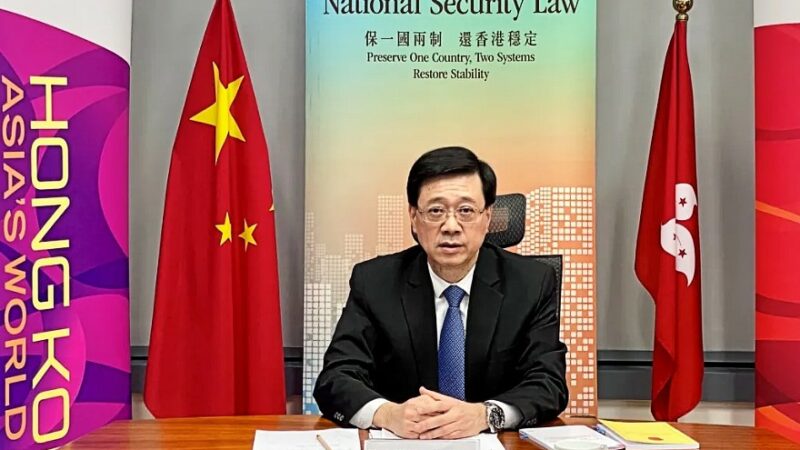 The original version of the report is written by Kelly Ho and published in Hong Kong Free Press (HKFP) on April 18, 2022. The following edited version is published on Globalvoices under a content partnership agreement with HKFP.

Hong Kong’s former chief secretary John Lee has officially thrown his hat into the ring for next month’s top leadership race after receiving 786 nominations on April 13, 2022. The 64-year-old is the sole hopeful in the small-circle election scheduled for May 8. Lee is on track to be elected the next chief executive by the 1,462 Election Committee members he vetted last year.

Lee’s appointment will mark the first time a former police officer from the security branch of the government assumes leadership of the city. Known for his hardline approach since he took the helm of the Security Bureau in September 2017, Lee’s tenure saw the 2019 protests and the subsequent enactment of the Beijing-imposed national security law.

He gained an unprecedented promotion last June to the second-highest role in the administration, where he was entrusted to chair a powerful committee to ensure election candidates were Chinese patriots.

The role paved the way for him to become “Beijing’s man.” But who is John Lee? Here are some key quotes and positions from the expected incoming leader of Hong Kong.

On the 2019 extradition bill

As then-security chief, Lee played a pivotal role in pushing for the ill-fated extradition bill in 2019, which sparked the city’s worst political and social turmoil in decades. He stood firm on passing the controversial proposal that would have allowed fugitives to be handed over to mainland Chinese authorities, despite criticism that a fair trial might not be guaranteed under China’s opaque legal system, and concerns that the arrangement might be used to stifle dissent.

The current system contained “loopholes” that the government must “plug,” he said on May 8, 2019.

We have been an ostrich for 22 years.

The government’s resolution to put forward the extradition bill resulted in large-scale demonstrations and protests two months later, when more than one million Hongkongers — according to organizers’ estimate — took to the streets on June 9 to demand the “evil law” be scrapped.

The bill was suspended days after tens of thousands of protesters surrounded the government headquarters in Admiralty to delay the legislative debate. But Chief Executive Carrie Lam’s refusal to withdraw the proposed amendment triggered another mass demonstration on June 16, this time with an approximate turnout of nearly two million.

The historic march prompted Lam and Lee to apologize to the public for mishandling the bill on June 29 2019. He pledged to “listen to opinions broadly” before pushing for a policy in the future.

We admit there were deficiencies in our work promoting the amendment bill. It triggered social conflicts, disputes and anxieties. We apologise for this.

The apologies from top officials did little to assuage public discontent, however, and citywide unrest continued to rock Hong Kong for months and the demands of protesters morphed into wider calls for democracy.

In response to accusations that frontline police had failed to display their warrant cards, making it difficult for people to file complaints against the force, Lee told lawmakers on June 19, 2019, that officers had no space on their uniforms to display their credentials.

The design of the uniform leaves no space for displaying the police officer’s number.

He also urged citizens not to “vent” their discontent with the government against the force.

As the unrest continued to unfold, Lee and other top officials toughened their interpretation of the protests, issuing strongly-worded condemnations and characterizing the 2019 movement as citywide “riots” and “dark violence”.

Like other Hong Kong officials, Lee threw his weight behind the sweeping national security law (NSL) that came into effect on June 30, 2020. He hailed the legislation which targets secession, subversion, collusion with foreign forces, and terrorist acts as placing the city’s “chaos under control” and reestablishing security in Hong Kong.

The police force won sweeping authority to intercept communications, require internet service providers to take down information, as well as search and seize journalistic materials. In an interview with Sing Tao in July 2020, Lee said the powers were “appropriate.”

In his first blog post as chief secretary dated July 3, 2021, Lee gave his word that the government would launch an “all-out effort” to combat what he described as local terrorism.

The violent riots that had taken place in Hong Kong since June 2019… had the more profound consequences of ruining people’s law-abidingness and breeding homegrown terrorism.

Citing the “lone-wolf attack” on a police officer during the city’s handover anniversary, the official warned that tributes to the suspect who committed suicide amounted to glorifying and encouraging an act of terror. It was how “domestic terrorism” often emerged, Lee claimed, adding often it could also stem from “the incitement of hatred, discord, and division.”

The then-chief secretary also commented on Hong Kong’s first-ever national security trial, where defendant Tong Ying-kit was jailed for nine years for inciting secession and engaging in terrorist acts. Lee said the sentence had to be enough of a deterrent to caution the public from breaking the law.

On Apple Daily and Stand News

In his final days as the head of the Security Bureau, Lee froze HKD 18 million (USD 2.3 million) worth of assets of pro-democracy newspaper Apple Daily, after national security police arrested several senior executives and raided the newsroom for the second time in June last year. The move forced the 26-year-old tabloid to shutter and print its last-ever edition a week after the arrests.

The swift demise of Apple Daily dealt a “chilling blow” to the city’s press freedom, critics said, but Lee insisted the case had nothing to do with “normal journalistic work” and told other members of the press to “keep their distance” from Apple Daily on June 17, 2021.

Ordinary journalists are different from them… [for] anyone who tries to use journalistic work as a shield to engage in crimes endangering national security, the SAR government must use the strictest measures to clamp down [on them].

Lee made similar remarks when the government cracked down on a second news outlet that had a pro-democracy slant in December last year. Seven people linked to digital outlet Stand News were apprehended on suspicion of breaching the colonial-era sedition law, with two former top editors later charged with conspiring to publish seditious publications.

The independent outlet shut down on the same day as the arrests and police raid, deleting all of its content.

Speaking as the chief secretary, Lee called on journalists to distance themselves from “evil elements” who “damaged press freedom” on December 29, 2019.

Professional media workers should recognise that these are the bad apples who are abusing their position simply by wearing a false coat of media worker… they will pollute press freedom.

Lee was among 11 Hong Kong and Chinese officials sanctioned by the US Department of the Treasury in August 2020 for “undermining Hong Kong’s autonomy” and “restricting the freedom of expression or assembly of the citizens of Hong Kong.”

The then-security minister was said to have been involved in “coercing, arresting, detaining, or imprisoning” people under the security law, as well as developing, adopting, and implementing the legislation.

Lee hit back at the US on August 8, 2020, accusing them of being a “hypocrite” that adopted “double standards,” adding that the country had its own laws protecting national security.

Safeguarding national security is only natural. The US wants to use those so-called sanctions to intimidate [me] – it will not succeed.

China has long been accused of human rights violations against its Uyghur minority, including sending what rights groups estimate to be up to one million people to “re-education camps,” as part of an “anti-terrorism” crackdown in the vast western region of Xinjiang.

In December 2018, Under Secretary for Security Sonny Au led a nine-member delegation to visit Xinjiang on an exchange with local authorities relating to the prevention of terrorist acts.

Lee told legislators on January 9, 2019, that Hong Kong could learn from how the Xinjiang authorities tackled what they saw as acts of terror.