What Earth Day means to the Global Voices Caribbean team 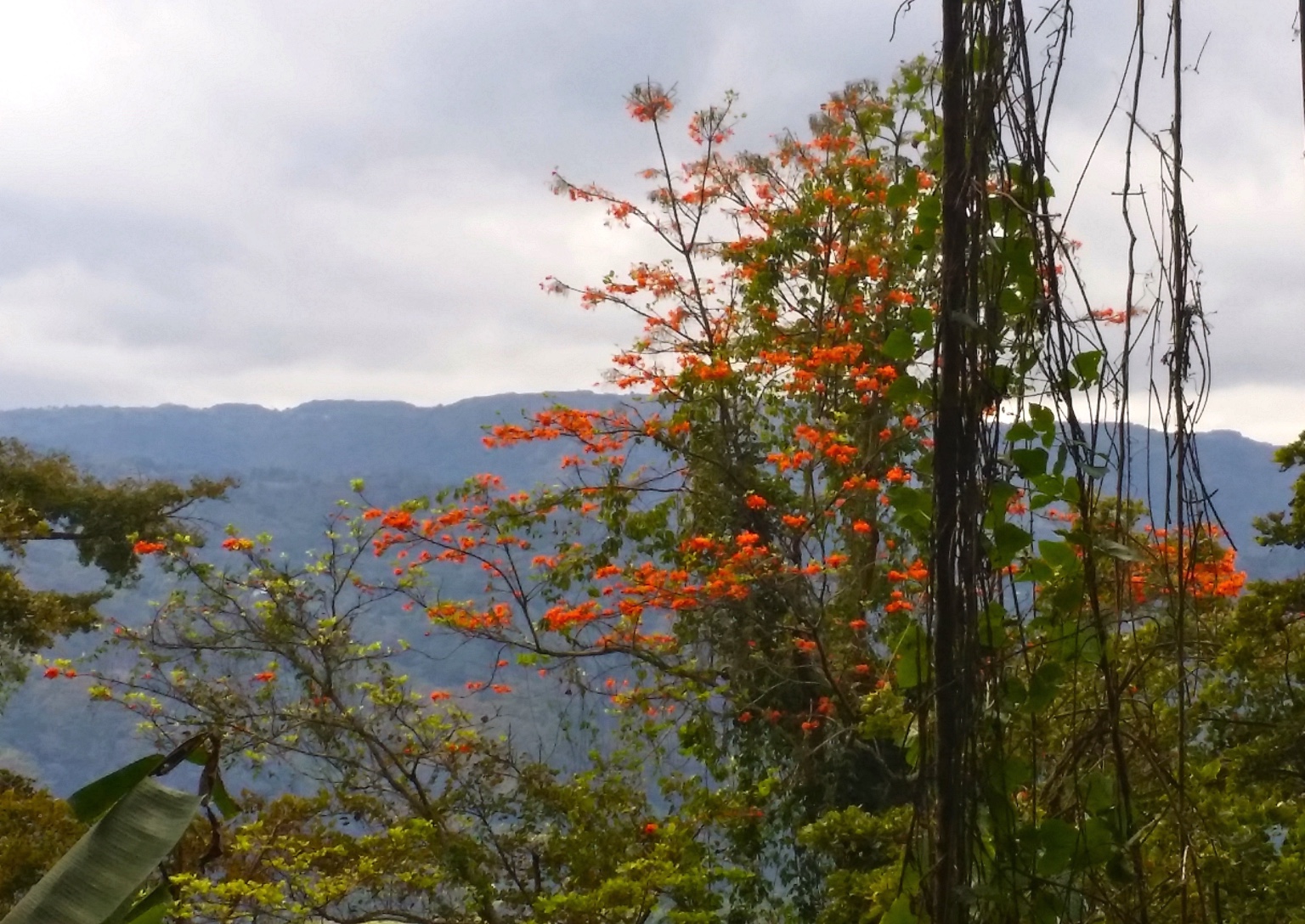 Immortelle trees in the hills of Clarendon, Jamaica. Photo by Emma Lewis, used with permission.

What do you think of when you hear the words “Earth Day”? Do you glaze over at the thought of more talk about the environment and the many ways in which we're collectively not doing enough to protect it? Do you feel a sense of impotence that the climate crisis is so far along, yet world governments seem to be dragging their feet on decisive action? Do you dismiss environmental activists as overreacting, or tremble at the thought of what climate injustice is doing to Small Island Developing States (SIDS) like the Caribbean?

Climate change is perhaps the most urgent issue of our time, yet the plethora of information about it can sometimes have the opposite effect, desensitising us, making us feel far removed from the heart of the issue, which is that we must find ways to adapt to a swiftly changing planet and live in sustainable balance with it.

The Global Voices Caribbean team, which includes birders, hikers, amateur photographers and general outdoor enthusiasts, understands that respecting our earth is non-negotiable if we are to survive, far less thrive. For us, nature is more than news headlines or COP conferences; it is real, tangible, and with most of us living on islands, literally all around us. This Earth Day, by sharing some of our favourite parts of the earth and why they're meaningful to us, we wanted to remind you why we mark the occasion, and why our planet needs us to be its ally … 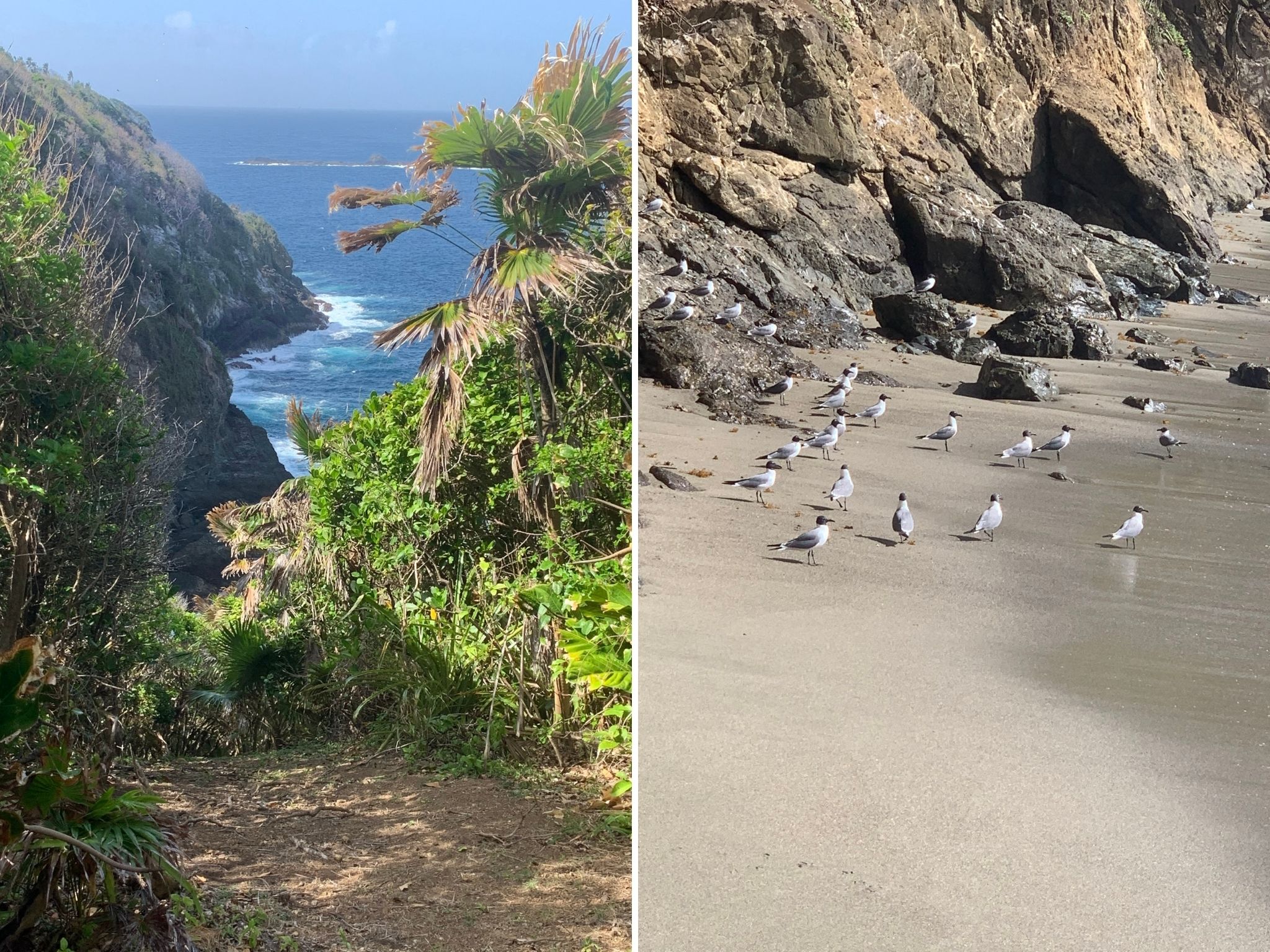 Little Tobago, a small island off the northeastern coast of Tobago, and part of the twin-island nation of Trinidad and Tobago, is an important breeding site for seabirds. Photos by Tabatha Auguste, used with permission.

Little Tobago also fondly called Bird of Paradise Island, is a small island off the northeastern coast of Tobago. Inhabited mostly by wildlife and various species of birds, I found myself completely enchanted by it when I travelled to Tobago in 2021.

Only accessible by boat, a few Tobagonians task themselves with regularly visiting the island in order to supply the various species of birds with homemade nectar. Tourists and birdwatchers travel from all over the world to see species that solely inhabit this small island.

Such a local treasure, yet I was saddened to see the only structure on the island dilapidated and in desperate need of restructuring. It is of utmost importance to do more as a community and a country to preserve these natural treasures entrusted to us and today, on Earth Day, I would like to highlight this sanctuary in the hope that it receives the care it so desperately needs to preserve the beauty it so generously bestows. 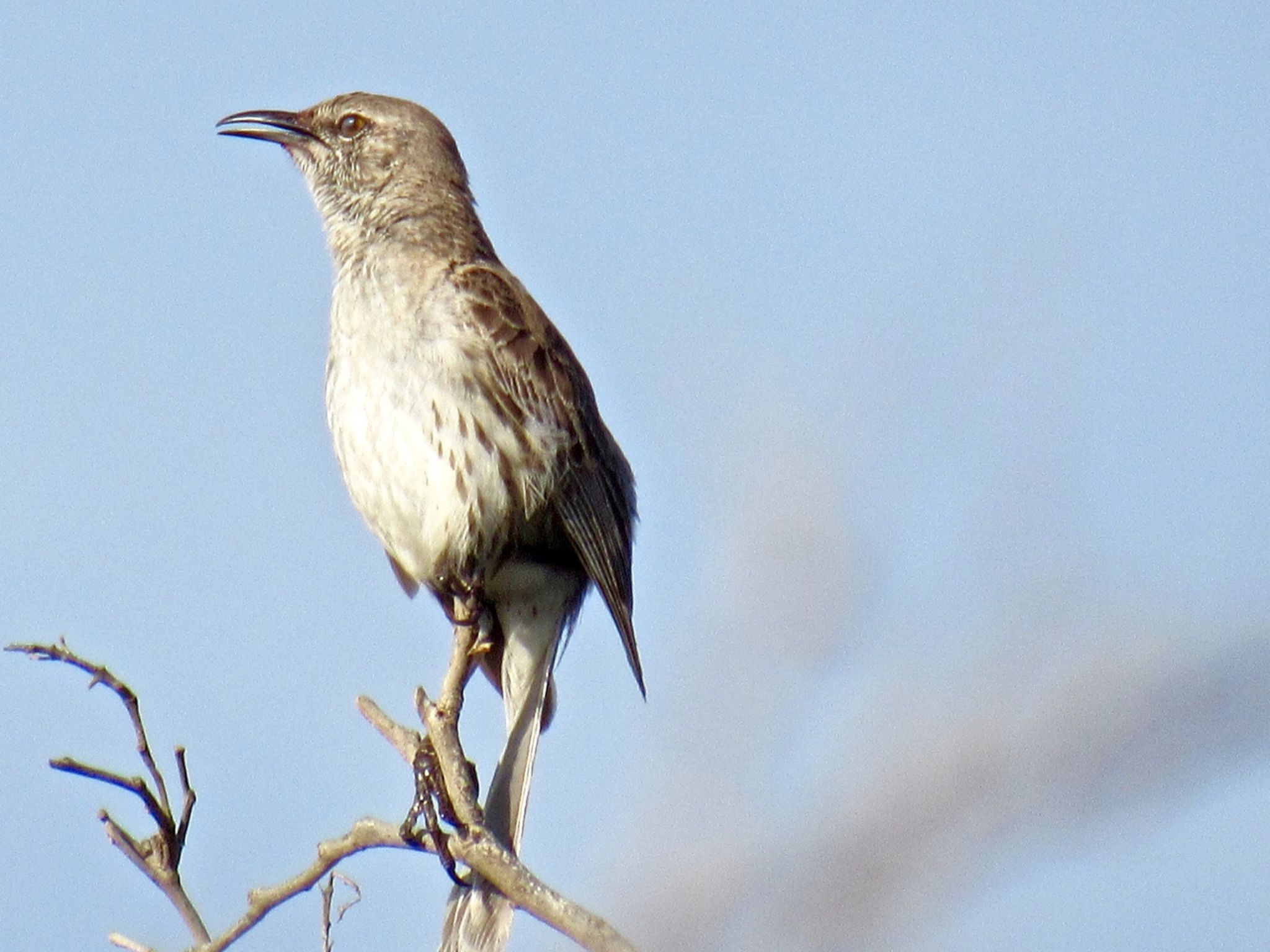 This photo, which I took on an amazing early morning birding trip with BirdLife Jamaica, makes me a little sad, though it was singing very sweetly at the time! As its name suggests, the Bahama Mockingbird is a permanent resident of The Bahamas, but also lives in some parts of Jamaica, where its range is restricted to the coastal dry limestone forest of the south coast.

Hurricanes, climate change impacts, and spreading housing developments in this wild, dry area are eating away at this beautiful bird's habitat — a very dry but vibrant ecosystem that many Jamaicans consider unattractive. To me, its bare, white honeycomb rock, cacti, and spindly, spiny vegetation have their own special appeal.

This bird is an example of many species in the Caribbean threatened by the loss or degradation of the places where they migrate, feed, and breed, mainly because of climate change and human activities such as housing and tourism developments. By the way, the Hellshire Hills is where the Jamaican Iguana (once thought to be extinct) was “rediscovered” in 1980; there is now an active breeding programme at Hope Zoo in Kingston, and hundreds of iguanas have been reintroduced into the wild. I really hope this remarkable landscape will be preserved for the future. 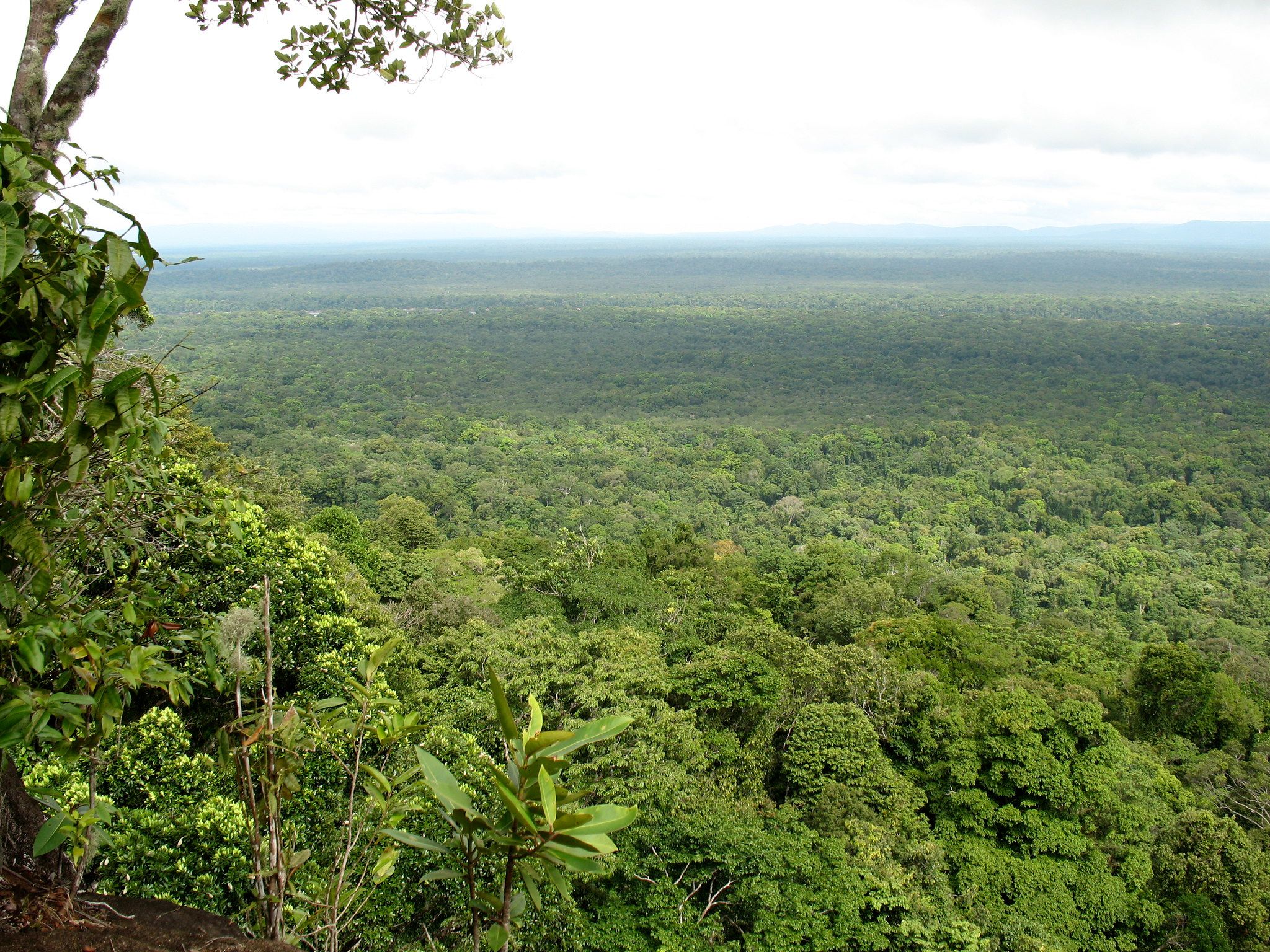 View from the top of Turtle Mountain, Guyana. Photo by Skye Hernandez, used with permission.

On Earth Day, we pause to think about the planet we live on and share with other beings. But that’s just one part of it. We ask ourselves what are we prepared to do to ensure that “none of them can stop the time,” as Bob Marley sang?

I think a lot these days about Guyana, a place I fell in love with during an eight-day visit to the Iwokrama Forest some years ago. I took these pictures on the Essequibo River, near Fairview Village, an Indigenous community within the forest on a day when the river was low enough to see ancient petroglyphs and for some boys to play in the rapids, and from the top of Turtle Mountain, showing the seemingly never-ending “bush.” 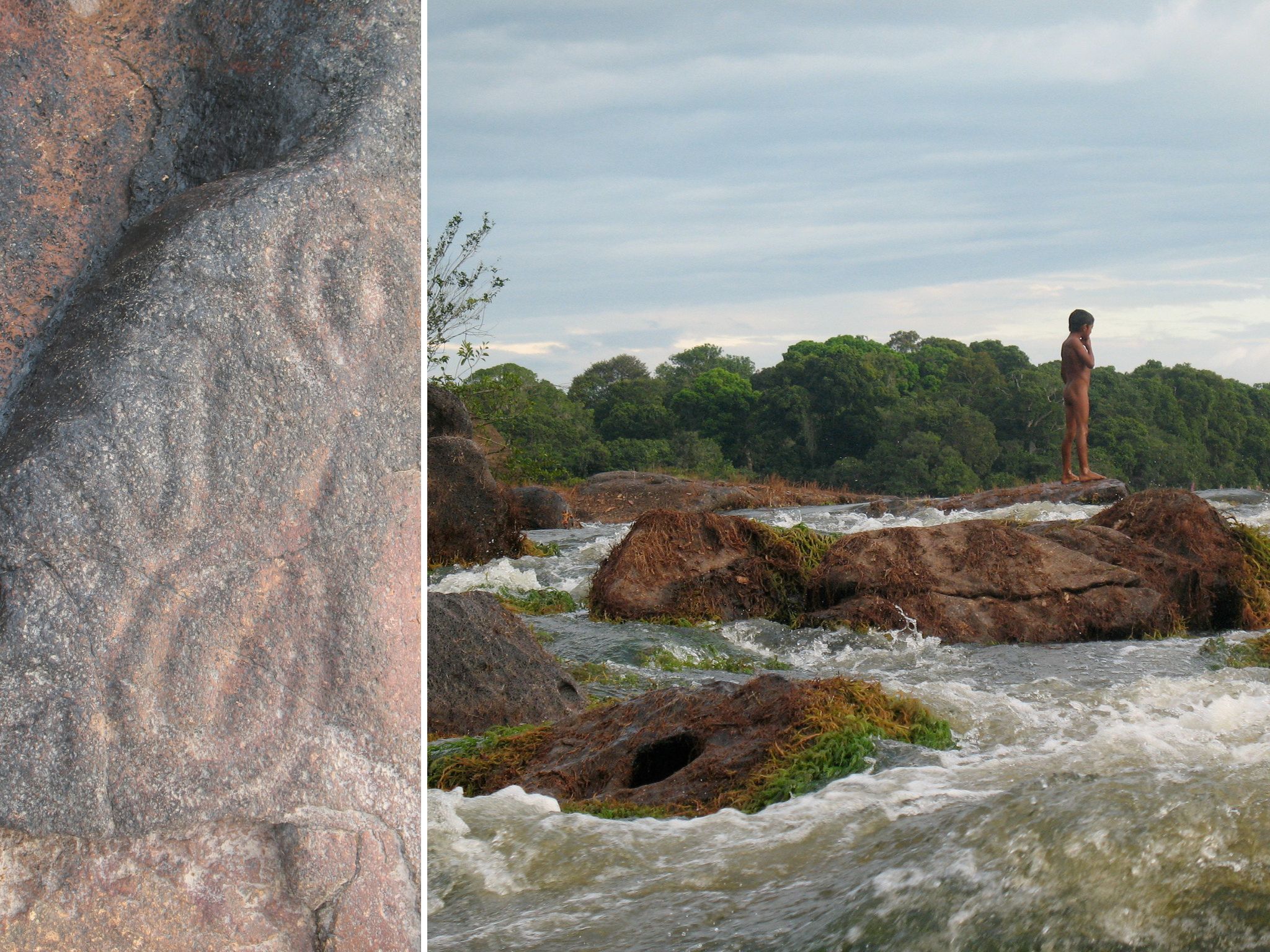 L-R: Petroglyphs along the Essequibo River, and Indigenous boy standing on a river rock, Guyana. Photos by Skye Hernandez, used with permission.

After decades of being considered a dreary “backwater,” Guyana is undergoing a transformation in the eyes of the Caribbean and the world. Since the discovery of oil, Guyana has suddenly become an energy hub, a new “land of opportunity.” Recently, the country’s president, Dr. Mohammed Irfaan Ali spoke about another kind of wealth the country possesses as a “world leader in climate change ecosystems and biodiversity,” with “18.3 million hectares of standing forest,” at “an estimated value of US$500 billion.” I hope Guyana continues to value its rainforest as well as the new sources of wealth it is poised to enjoy. 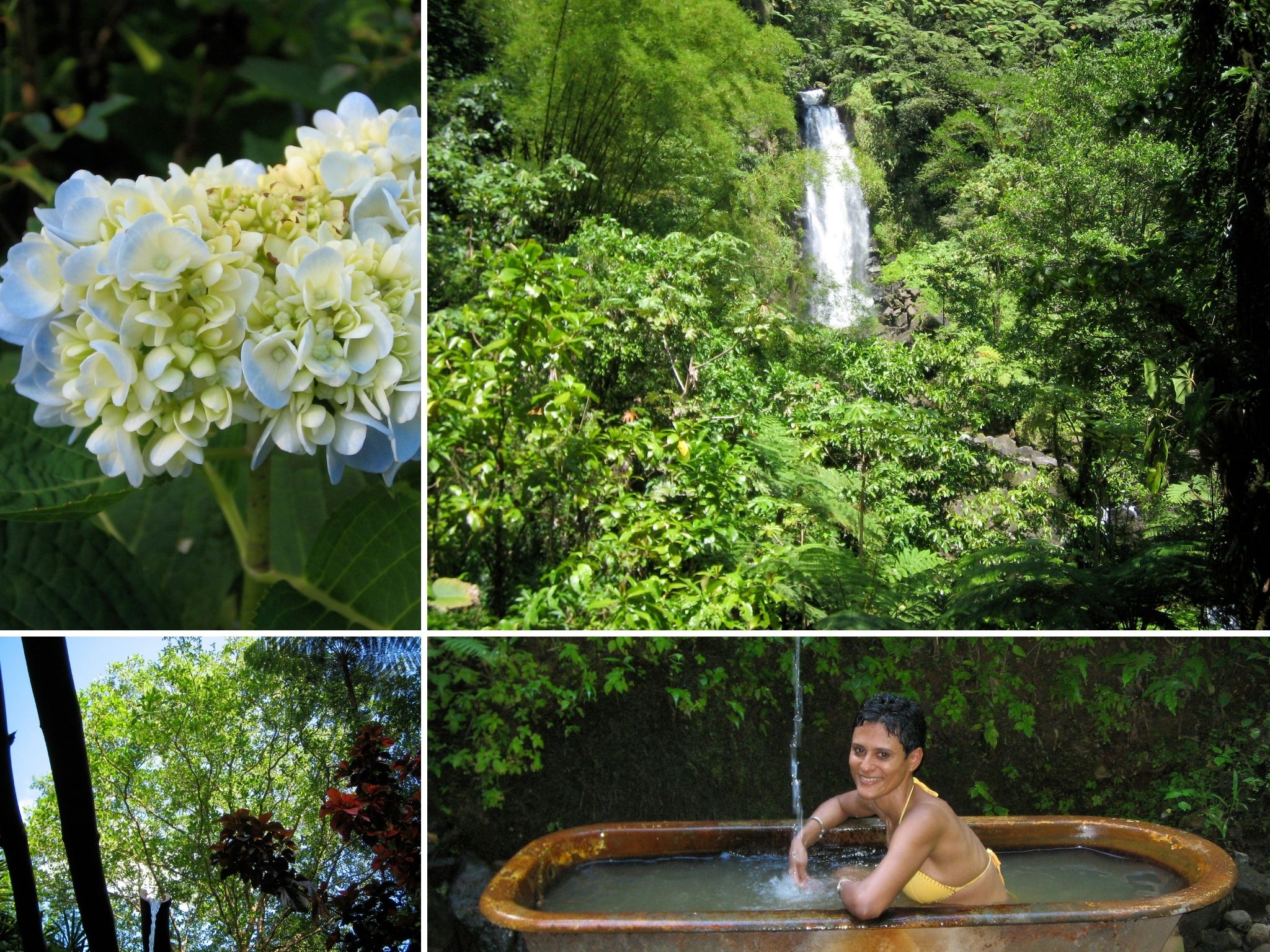 Clockwise, L-R: Hydrangea flower, Trafalgar Falls, appreciating the sulphur springs and the view of forest canopy from the springs in Dominica. Photos by Janine Mendes-Franco, used with permission.

In 2006, about six months after my father died, I took a trip to Dominica. A real Caribbean man, my Dad had either visited, lived or worked in most of the islands in the archipelago, but always spoke of the “nature island” with particular fondness. Though the approach was a little hair-raising (twin-prop aircraft, steep descent onto a probably-shorter-than-it-should-be runway with majestic mountains to the rear of the plane and an endless sea in front), I was immediately ensconced in the island. Its viridescence made me feel like Dorothy in the Emerald City; the more I discovered, the more I felt as if this magical place was the golden lining at the end of my yellow brick road of grief.

The trip restored me; no matter where I went, there was nature, reminding me of the vastness of things, the impeccable timing of things, the resilience of things. The thunder of the breathtaking Trafalgar Falls made me feel small, yet the challenge of scaling the rocks to reach her pools paled in comparison to the sense of renewal I felt once I got there. Everywhere I turned, it was the same lesson: we are all connected, intertwined, mutually dependent. Whether breathing in the mountain air or swimming at Scott's Head, a famous whale-watching site, the earth and I were in a delightful dance of give and take. 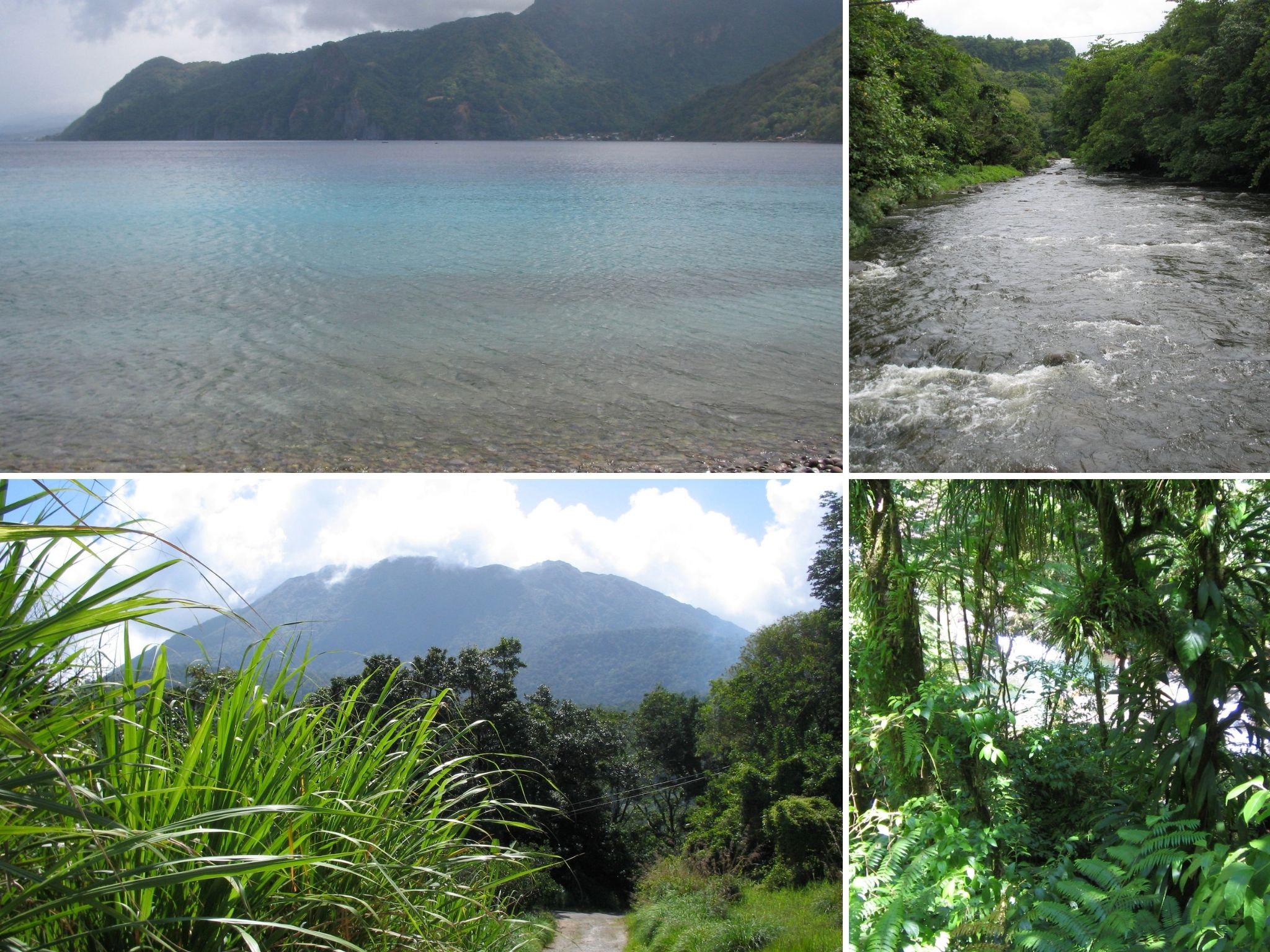 But we humans have been doing too much taking and the imbalance is throwing everything off-kilter. When, in 2017, Hurricane Maria tore through Dominica, I — like the rest of the region — was heartbroken. Perhaps if we really began to see nature as mother, partner, supporter, protector; began to breathe her in like the life source she is, we'd finally see that we can't live without her. Then, perhaps, top carbon-emitting countries would begin to consider the effects their outputs are having on small, frontline nations like ours.

This Earth Day weekend, go out and experience the wonders of nature for yourself. Walk barefoot. Hike a trail. Follow the path of a river. Submerge yourself in saltwater. Be healed, and use that power in turn to make choices that heal our planet. 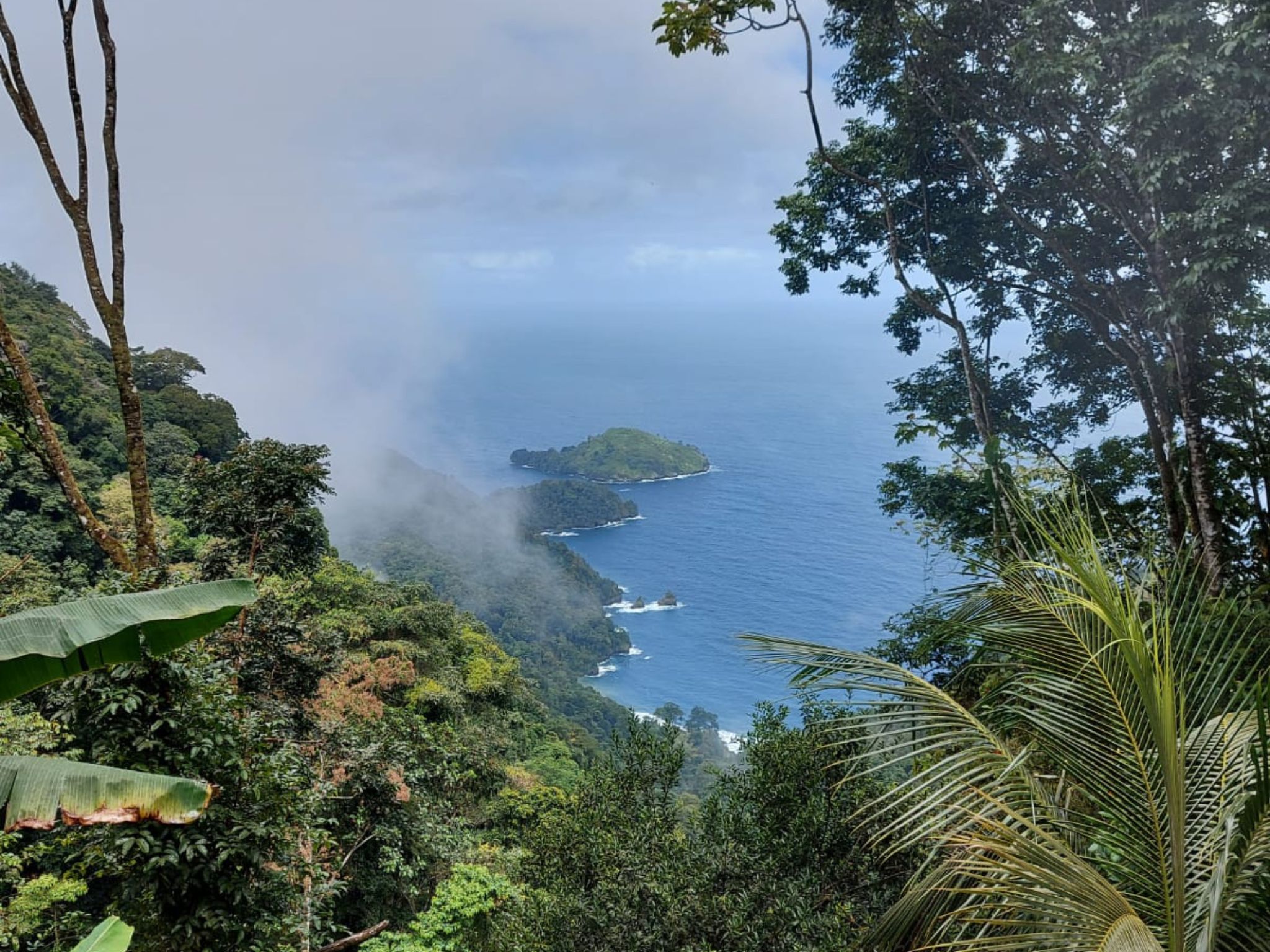 Along the northern coast of Trinidad are many pristine beaches, inaccessible to the public by car. We see them as we drive through the mountains of the Northern Range on the way to popular spots like Maracas Bay.

Just the drive alone is part of the experience: windows down, breathing in fresh air as we gaze upon the beaches below, nameless to our knowledge, breathtaking to behold.

These beaches stand in stark contrast to the noisy, litter-strewn, commercialised spots where many settle for the day. They offer us a reminder that Mother Earth's healing is most potent in her purity. Just the sight of her glory can make the mind soar. Happy Earth Day!