Munich has a large population of both Russians and Ukrainians 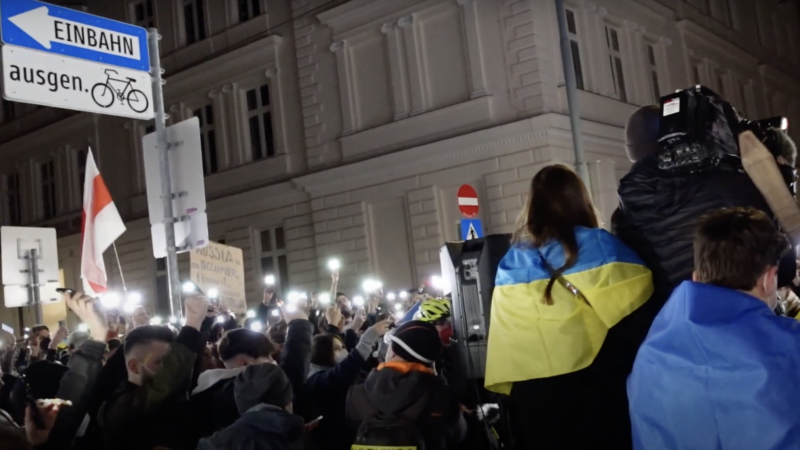 A screenshot from Yostef YouTube channel showing an anti-invasion demonstration in Munich with the Ukrainian and white-red-white Belarusian flag used by the opposition to Lukashenka.

Since the outbreak of Russia’s invasion of Ukraine, Russian authorities keep claiming that the majority of Russian citizens support the “special military operation,” as Moscow insists on calling it, in Ukraine. They try to convince the global public and Russian citizens about their views by staging concerts and events in support of Putin and his policies, both within Russia and abroad. However, since the first day of the war on February 24, many Russians around the world have been demonstrating in anti-war protests to show their disagreement with Moscow's decisions and actions, and to express their solidarity with the Ukrainian people. Munich, a city in southern Germany, is no exception, as it is home to a significant community of Russians and Ukrainians alike.

The Russian-speaking community in Germany is not homogenous. It includes those who have lived in Germany for a long time, but for the last 20 years have been watching Russian television and blaming the European Union for all their problems. Mostly, these are people who moved to Germany from Russia in the 1990s under a repatriation program for ethnic Germans and have not travelled back to Russia since.

But there are also those who have seen life in Russia with their own eyes and have experienced the dysfunctional branches of power, the oppression of small and medium enterprises, and the repression and restrictions on freedom of speech. Indeed large numbers of Russians in Germany support democratic values and are unequivocally against the war and the Russian government.

The first difference between Russian people living abroad and those living in Russia is that they have freer access to different sources of information and are not as conditioned by the Kremlin's narratives as those who never left their country. Besides, those living abroad can openly come out and express their opinions without fear of being arrested.

There is also a fairly large Belarusian community in Bavaria, where Munich is located, and the major part of it is in opposition to the Lukashenka government. Despite the fact that Belarusian troops are not officially involved in the war in Ukraine, Lukashenka has provided Russian troops with territory to attack Ukrainian cities and provided logistics for the Russian army, thus making the country an accomplice to this bloodshed.

In order to publicly condemn the actions of both governments, and also to demonstrate the friendship and unity of the peoples who once belonged to the same state, a large part of the Russians and Belarusians residing in Munich at the beginning of March decided to organize joint anti-war protests under the slogan “Russia and Belarus against the war.” The close contact between the two communities was established through Facebook more than 5 years ago and became even stronger since the events in Belarus in 2020 when rallies organized by the Belarusians were actively supported by Russian folk in Germany.

The joint anti-war protests take place almost every week, and organizers have created a Telegram group to coordinate and announce events that are special because protesters do not usebthe official flags of their countries, but alternative and informally accepted new flags that symbolize the affiliation of people to their country and nation, but not to the governments in place. The Belarusians have a white-red-white flag, which emerged and gained popularity during the events in the country in 2020.  Russian oppositionists, in turn, have recently started to use a white-blue-white flag, which differs from the official white-blue-red one as a symbol of anti-war protest. The new flag appeared to be a solution for those who are not ready to abandon their origin and language but do not want to associate themselves with Putin's fascist regime, for those who love their homeland and openly oppose the regime on behalf of their compatriots in Russia.

One of the protesters, Andrey Sobolev, described to Global Voices his motivation for participating as follows: “I understand how important it is now to preserve the friendship between the peoples of Ukraine, Russia and Belarus by showing and providing support from our side so that our children can live in peace and harmony in the future”.

Anna, who asked not mention her last name, is one of the organisers of the protests, and shared her concerns with Global Voices:

As a Russian, I feel responsible for how our people will be perceived in the future. So we try to join our hands against the war — we come out for rallies, we support Ukrainians by collecting humanitarian aid, meeting and resettling refugees and, of course, we support the protesters in Russia. The latter is one of our primary goals: to unite and consolidate Russian society in Munich and to build a bridge to the communities of other cities and countries and to Russia so that we can plan further joint actions together.

Keeping in touch with the homeland is not easy in general. One of the most painful moments for anti-war Russians and Belarusians living abroad is precisely communication with relatives and friends living in the aggressor countries. They have to wade through propaganda's narratives of what is happening in Ukraine and Europe, where Russians are allegedly being discriminated against.

“Contrary to Putin's propaganda, we can safely say that no one is harassing us here, in fact, it is quite the opposite: we are supported by society, at work and in universities,” Anna states. The description of this reality does not go very far and many people, unfortunately, have to cut back or stop communicating with those who were once close to them. However, there are cases where, with help of facts and reasonable logical explanations it becomes possible, if not to convince people, but at least to make them analyze and question what is being broadcast on Russian TV.

Apart from the population inside Russia, activists also try to reach out to local Russians who are not yet integrated into German society and still receive information mostly from Russian sources. The protests aim to draw their attention and change their views so that they can further disseminate balanced information to their relatives and acquaintances in Russia in the future.

Importantly, the actions organized by Belarusians and Russians are also attended by their Ukrainian friends in order to demonstrate the absence of hatred towards individuals they know personally and towards Russian and Belarusian nations. One of the Ukrainian participants, Denis, defined his position to Global Voices in those terms:

One of the Russian activists, Alexander, begins his speech at the protests by asking those present to give themselves a round of applause for finding the strength and opportunity to come out and make their voices heard.  “We are Russians,” he says, “we are proud to be born in Russia and we need to show the world that here we are true Russians and we are doing good things — we are helping refugees, we are trying to change this world for the better and united we stand!”