Sarajevo Stands with Ukraine and the Ukrainian people 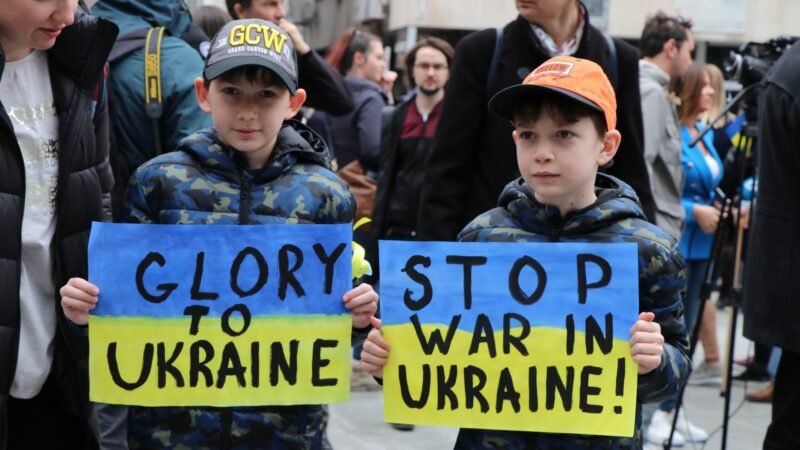 This article was originally published on Balkan Diskurs, a project of the Post-Conflict Research Center (PCRC). An edited version is republished by Global Voices as part of a content-sharing agreement.

In the days marking the 30th anniversary of the longest siege of a capital city in modern history, hundreds of citizens of Sarajevo came out to protest Russia’s aggression against Ukraine, sending a unique message of sympathy to the people of Ukraine. In addition, Sarajevans urged the authorities of Bosnia and Herzegovina (BiH) to enable Ukrainian refugees to remain legally in their country for more than 30 days without a stipulation to request asylum.

“It evokes difficult emotions in us and awakens our empathy in support of the Ukrainian people,” said Karić at the “We stand with Ukraine” protest, which was organized by the Post-Conflict Research Center on April 9 in Sarajevo. 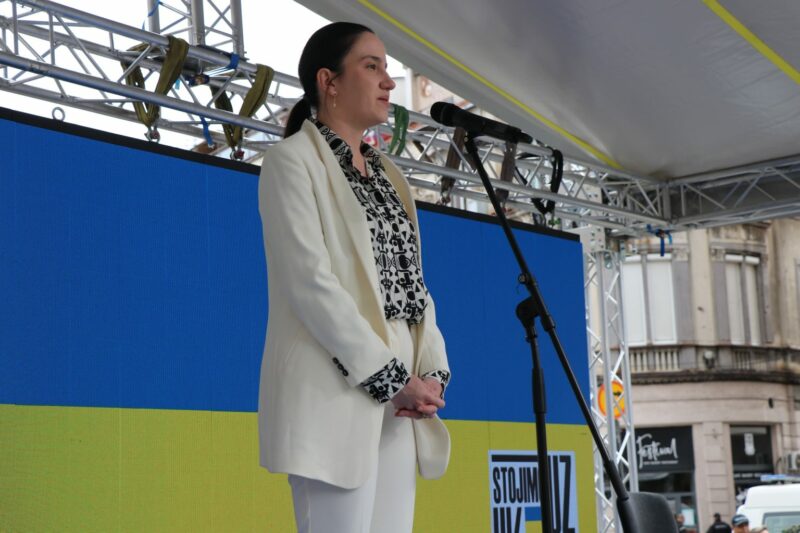 Velma Šarić, president and founder of the Post-Conflict Research Center, said that supporting Ukraine is the responsibility of all those who believe in justice, equality, tolerance, and peace. “Support for Ukraine is support for all victims and survivors who have experienced or continue to experience injustice, crimes, and genocide — from Bosnia and Herzegovina to Rwanda, Syria, Yemen and more,” Šarić said. 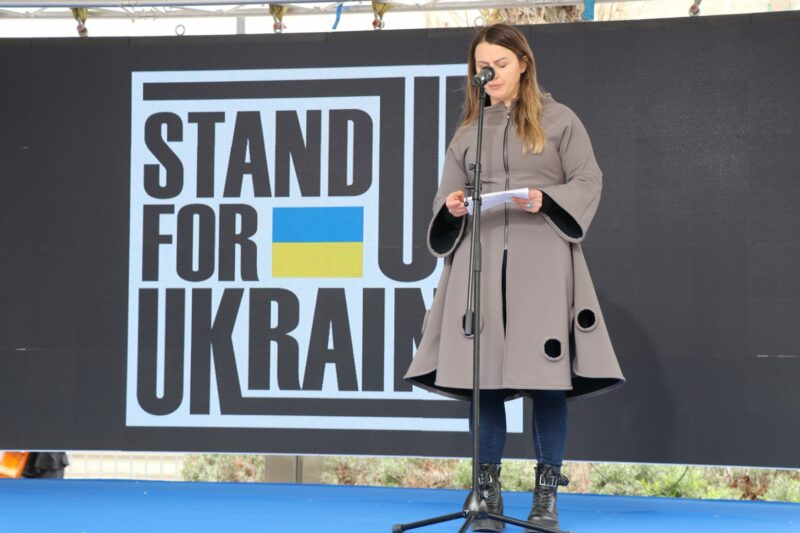 She appealed to the Council of Ministers of BiH to resolve the issue of the stay of Ukrainian refugees in the territory of BiH, and to extend the period which they are allowed to stay in the country for more than 30 days. 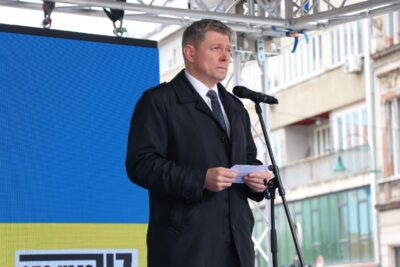 “The fact that after 45 days the whole world is with us and supports us — supports us not only with words but also by collecting humanitarian aid — is very important for Ukrainians. That means that we will win,” said Serhii Miniailo, Charge d’Affaires of the Embassy of Ukraine in BiH. He added that “the light is on our side and there is hope for the truth.” 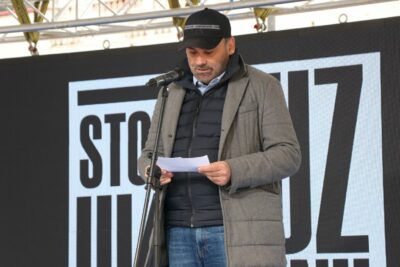 “We know that no one ever gets messages in the long run. Our gathering today is proof to Ukrainians that they are not alone. Every war image from Ukraine evokes scenes from the 1990s. We know better than all of Europe what is happening there.”

Tatjana Milovanović, program director of the Post-Conflict Research Center, explained that, in the aggression against Ukraine, which began on February 24, 2022, thousands of civilians were killed, including over 130 children. Additionally, hundreds of thousands of people lost their homes, thousands of buildings were destroyed, including national monuments, hospitals, and historic buildings.

“This peaceful protest was organized by the City of Sarajevo, civil society, and citizens, in support of the people of Ukraine and all innocent victims of hatred, division, and terror,” Milovanović said. 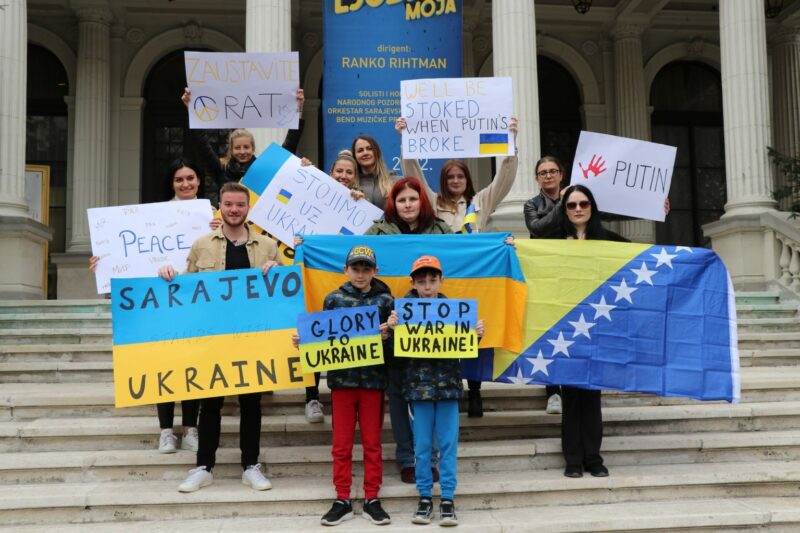 Participants of the protest holdings sings reading “Stop the war,” “We'll be stoked when Putin's broke,” “We stand with Ukraine,” “Peace,” “Sarajevo Ukraine,” “Glory to Ukraine,” and “Stop the war in Ukraine!” Photo: Balkan Diskurs / Benisa Bibuljica, used with permission.

Many prominent cultural and political figures as well as diplomatic representatives from Great Britain, Norway, Poland, Austria, Slovakia, Sweden, Czech Republic and the United States joined those present in front of the National Theater for the We stand with Ukraine protest. 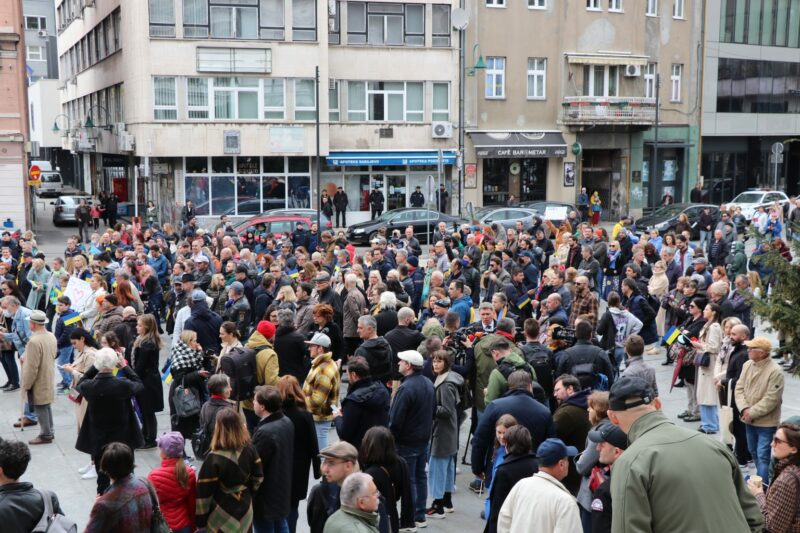 Saša Magazinović, state representative and representative of the Social Democratic Party (SDP), said that it was beyond a moral obligation in Sarajevo, but also in BiH, to speak out against the Russian aggression in Ukraine. “We are especially obligated to raise our voice against the Russian aggression — all of us who were hurt by the silence of others who turned their backs on us,” said Magazinović. 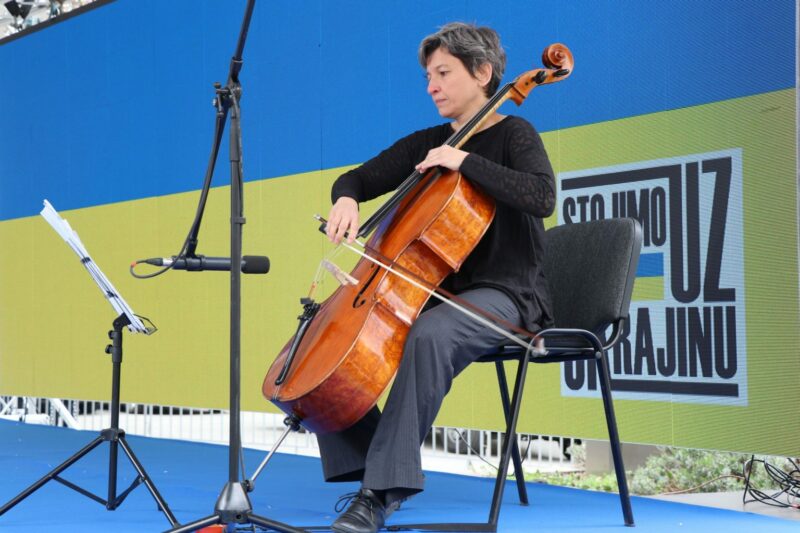 The peaceful protest “We stand with Ukraine” was accompanied by a cello performance by Belma Alić.

On April 20, the government responded to the key protest demand by adopting a decree allowing Ukrainian citizens to stay  in Bosnia and Herzegovina for up to 6 months without the need to undergo procedure for requesting asylum. This temporary stay can be extended for humanitarian reasons related to the war in Ukraine. In addition, since March 17, the government of the entity Federation BiH  has provided free housing for refugees in need in the Hotel Walter.