The drug manufacturer's stock surged and plunged within days 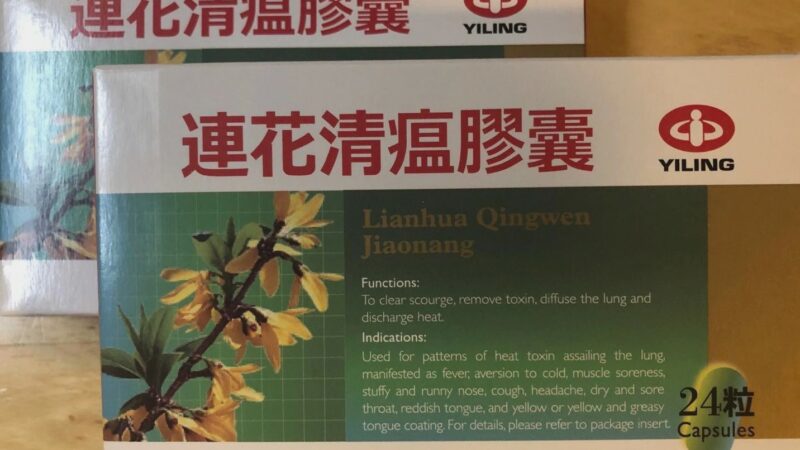 While Shanghai residents are struggling with food shortages, they have an abundant supply of “Lianhua Qingwen,” a Traditional Chinese Medicine (TCM) composed of extracts of a dozen herbs which has been widely used to treat COVID-19 in China, although the effectiveness of the medicine is not supported by reliable clinical data.

As Shanghai is distributing the herbal capsules to the city’s 26 million residents, false claims that the drug can effectively protect against COVID-19 have flooded Chinese social media in the past two weeks. The stock of the drug manufacturer, Shijiazhuang Yiling Pharmaceutical Company, surged and then plunged within days, thanks to online backlash.

The Chinese government has celebrated the country’s success in fighting against COVID-19 the spread with its zero-COVID policy with measures including city-wide lockdown, control of individual movement via a health code monitoring system, massive COVID-testing, and the application of TCM in treating the diseases.

Some of the rumors about the drug stem directly from the government. The white paper of the Chinese State Council “Fighting COVID-19: China in Action” issued in 2020 states that TCM, including Lianhua Qingwen:

Some critics believe that TCM has become a means for China to strengthen its economy at home while improving its soft power abroad.

According to the Chinese pandemic control playbook, local governments have to distribute TCM for free during pandemic outbreaks and Lianhua Qingwen has somehow out beaten other TCMs and become the most popular free gift to residents under lockdown.

A report from China Economic Weekly revealed that Shijiazhuang Yiling Pharmaceutical Company, the manufacturer of Lianhua Qingwen, has made RMB 3.3 billion profit, approximately USD 51.8 million, in the past nine months by selling the herbal capsules, primarily to government institutions.

In Hong Kong, every household has received at least two packs of Lianhua Qingwen during the city’s fifth wave of outbreaks.

Shanghai is also sending Lianhua Qingwen to the city’s 26 million residents, but the free gifts are not warmly received as many of the city’s residents are still struggling with food shortages. Shanghai-based Twitter user Lex Tang said:

As the drug has been distributed, there has been a flood of misinformation on Chinese social media about the effectiveness of Lianhua Qingwen.

On April 6, a news report coming from Shijiazhuang, where Lianhua Qingwen’s manufacturer is based, appeared on the state-affiliated People’s Daily Net. The news headline, “World Health Organization (WHO) recognizes TCM's effectiveness in the treatment of COVID, Lianhua Qingwen is proven reliable to prevent and treat [the disease]” (世防治获得可靠依据卫组织认可中医药治疗新冠疗效 连花清瘟防治获得可靠依据), immediately went viral on Chinese social media and the stock of Shijiazhuang Yiling Pharmaceutical Company surged.

The report was based on a WHO report published on March 31, 2022, that sums up an expert meeting on the evaluation of traditional Chinese medicine in the treatment of COVID-19. While the experts agreed that the studied TCMs are beneficial in the treatment of COVID-19 in mild-to-moderate cases, the report does not mention anything about TCMs’ effectiveness in preventing infection.

The WHO’s findings were rebuked on April 10 by a video blogger Shuiqian Xiaoxi (睡前消息), who further questioned the credibility of the randomized controlled trials (RCTs) of Lianhuaqingwen capsules. In addition to the small and randomly-picked sampling size of 284 patients from nine hospitals, the findings of the RCTs are published in the paper, “Efficacy and safety of Lianhua Qingwen” which is co-authored by Jian Zhenhu, the son-in-law of the herbal capsules manufacturer.

Despite the criticism, the Pharmaceutical Company carried on its social media marketing campaign. On April 12, a viral post titled “Lianhua Qingwen decreases infection rate among close contacts by 76%” (密接者用连花清瘟降低阳性感染率76%) was published on several online news platforms and later the title was turned into a hashtag by a number of opinion leaders who crowned Shijiazhuang Yiling Pharmaceutical Company as a corporation with a social conscience.

At the same time, a large number of testimonies emerged online regarding the effectiveness of Lianhua Qingwen. But the majority of these testimonies have a similar content structure. Here is one example of the promotion text circulated on social media:

24-year-old, studying in France, infected with omicron, took Lianhua Qingwen and recovered, no sequelae. I won’t say if I support the medicine or not, but it works on me. I am a pharmacy student and now related research is coming out in French.

Later some social media opinion leaders revealed that they had been approached by online advertising agencies to promote Lianhua Qingwen.

A backlash followed as many are outraged by the unethical commercial promotion tactics.

To debunk the spread of disinformation, some netizens started picking up the promotion hashtag to criticize the marketing campaign. Here is one example on Weibo:

#Lianhua Qingwen decreases infection rate among close contacts by 76%# Such a shameless way to earn money. I have two questions: 1. as big Vs [verified user accounts], have they registered themselves as the medicine’s spokesperson according to related requirements? 2. Has the percentage cited in the hashtag been approved by the regulatory body? If this is indeed illegal, does the regulatory body need to investigate the matter?

Some copied the structure of promotion contents to spread mockeries of the herbal capsules:

On April 16, Dr. Dingxiang (Lilac), an influential public figure on health issues, shared a post written by a truck driver who complained that one-third of the voluntary delivery worker manpower in Shanghai had been mobilized to deliver the capsules, rather than food. In a separate post, the health platform further addressed the medical problem involved:

Dr Lilac argues that Lianhua Qingwen cannot prevent COVID infection and its side effects remain unknown. Sending it to healthy residents in Shanghai is completely unnecessary and “should not have been done”. Full text: https://t.co/JhU8Y63eQR

In fact, a number of countries including Singapore, the USA, Australia, and New Zealand, have either warned against the use or banned the import of Lianhua Qingwen for treating COVID. Hong Kong has seen one case of liver failure related to the overuse of the herbal capsules.

Many big Vs have deleted the promoted content to avoid being criticized by other netizens.

Meanwhile, the Chinese censor, which always acts fast in cracking down on online rumors and unverified claims, has yet to remove clean claims that suggest Lianhua Qingwen can prevent COVID infection, leading some to believe the marketing campaign is a state-sponsored scam:

Is Lianhua Qingwen basically state-sponsored scam? I wonder how much money they made during the last 2 years.